Accessibility links
Spacecraft's Wild Ride To Mercury Yields Surprises Researchers are finding surprises in data from the planet nearest the sun. Among them: a crater with a base that's been lifted up higher than the rim, and new details on Mercury's core. 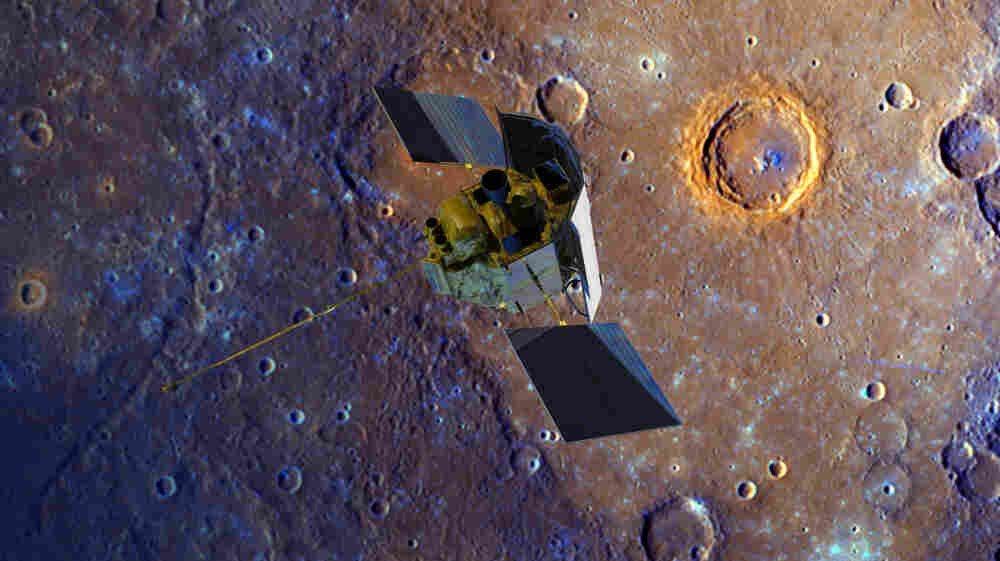 The Messenger spacecraft is depicted over the Calvino Crater on Mercury in this enhanced-color image of the planet's surface. NASA/Johns Hopkins University Applied Physics Laboratory/Carnegie Institution of Washington hide caption

There's a small spacecraft called Messenger that's been orbiting the planet Mercury for a year. Today, at the Lunar and Planetary Science Conference in Houston, astronomers revealed what they've learned about the innermost planet in our solar system, and some of the new knowledge is puzzling.

Maria Zuber, a planetary scientist at the Massachusetts Institute of Technology, studied a large crater 900 miles across called Caloris.

Another surprise is how big Mercury's core is.

A Long, Twisted Path To Mercury

It took the Messenger spacecraft nearly eight years to reach orbit around Mercury. Follow the topsy-turvy path the probe took to reach the planet closet to the sun.

Astronomers like Zuber have been waiting for a long time for Messenger's data. The spacecraft launched nearly eight years ago, on Aug. 3, 2004.

Now you may be thinking, "Wait a minute. Mercury isn't all that far from the Earth. That's spitting distance in astronomical terms. Heck, it's less than 50 million miles at its closest approach. Why does it take so long to get there?"

Zuber says the answer is gravity. Mercury's orbit is closer to the sun than the Earth's, and if you launch a rocket toward the sun, the sun's gravity is going to cause your spacecraft to speed up.

"And in order to get into orbit around the planet, the spacecraft has to slow down enough for the planet's gravity field to capture it," she says.

If you have a giant rocket engine, you can use that like a retrorocket to counteract the sun's pull, just like Scotty does when the Starship Enterprise is about to fall into a black hole. But Messenger didn't have a giant engine.

So instead, it used the gravity of other planets to slow it down with respect to the sun. In a trajectory worthy of Rube Goldberg, Messenger looped once around the Earth, then made two close encounters with Venus. When it arrived at Mercury in 2008, it was still going too fast, so it flew by Mercury three times, slowing down a little more each time. "The fourth time it came by Mercury it was slowed down enough that when we fired the main engine, Mercury's gravity field was able to capture it," says Zuber. Messenger has been orbiting Mercury since March 2011.

Sean Solomon of the Carnegie Institution for Science is another one of Messenger's principal scientists. He says the spacecraft's original mission was supposed to end after one year, but things were going so well they persuaded NASA to extend the mission. "Just on Sunday we began the Messenger extended mission," he says.

The extended mission is scheduled to last another year, so astronomers expect they'll have more to say at next year's meeting.

The reports presented at today's conference will also appear in this week's edition of the journal Science.