Accessibility links
Movie Review - 'The Hunger Games' Suzanne Collins' best-seller about a televised killing tournament has come to the big screen, with a cast that includes Jennifer Lawrence, Lenny Kravitz and Stanley Tucci. 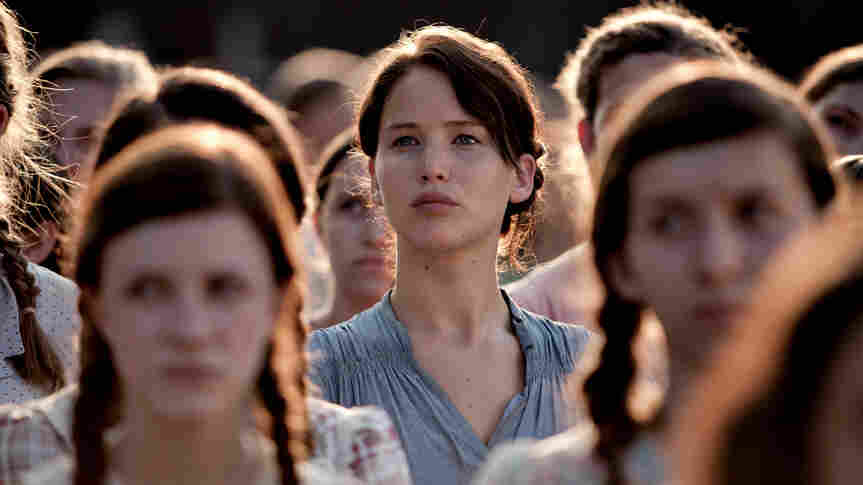 In The Hunger Games, Katniss Everdeen (Jennifer Lawrence) volunteers to take her little sister's place in a killing ritual televised to the masses. Lionsgate hide caption

From 'The Hunger Games' - 'Friends'

Suzanne Collins' novel The Hunger Games and its two sequels are smashingly well written and morally problematic. They're set in the future, in which a country — presumably the former United States — is divided into 12 fenced-off districts many miles apart.

Each year, to remind people of its limitless power, a totalitarian government holds a lottery, selecting two children per district to participate in a killing ritual — the Hunger Games of the title — that will be televised to the masses, complete with opening ceremonies and beauty-pageant-style interviews.

Out of 24 participants, only one child will live. And we hope it will be Katniss Everdeen, from the impoverished mining District 12 — a teen who, when her little sister is picked in the lottery, volunteers to take her place.

Why is it problematic? Kids killing kids is the most wrenching thing we can imagine, and rooting for the deaths of Katniss' opponents can't help but implicate us. But the novel is written by a humanist: When a child dies, we breathe a sigh of relief that Katniss has one less adversary, but we never go, "Yes!" — we feel only revulsion for this evil ritual.

If the film's director, Gary Ross, has any qualms about kids killing kids, he keeps them to himself. The murders on screen are fast and largely pain-free — you can hardly see who's killing who. So despite the high body count, the rating is PG-13.

Think about it: You make killing vivid and upsetting and get an R. You take the sting out of it, and kids are allowed into the theater. The ratings board has it backward.

The packed preview audience clearly loved The Hunger Games, but I saw one missed opportunity after another. Director Ross has a penchant for showbiz satire, pleasant in Pleasantville but ruinous in Seabiscuit — a great book about the torturous underbelly of horse racing turned into a lame, movie-ish period piece.

He approaches The Hunger Games like a hack. The film is all shaky close-ups, so you rarely have a chance to take in the space, and the editing is so fast you can't focus. As Katniss' dissolute mentor Haymitch, a former Hunger Games champ, Woody Harrelson has no chance to establish a comic rhythm — or disgust at what he's doing. The book's most fascinating and mercurial character, the costume designer Cinna, is now a blandly nice guy played by the agreeable but dull non-actor Lenny Kravitz.

The 'Games' We Play — In Panem, And Here

A highlight of the book is how Cinna uses his showbiz savvy to make the reluctant Katniss a star, the center of the pre-Hunger Games pageant. But in the movie, her entrance in a costume that's literally in flames is so poorly framed that you can't revel in her triumph. Ross throws away what could be a startling image of child warriors rising out of tubes to face one another in a semicircle, knowing they might die in seconds. Where is the horror?

The film gets some things right, like the shots of Katniss running through the woods, the canopy of trees above her streaking by. And it has an astoundingly good Katniss in Jennifer Lawrence. She's not a chiseled Hollywood ingénue or a trained action star — she looks real. And without words, she makes it clear that Katniss' task is not merely to stay alive but somehow to hold onto her humanity.

A few other actors register in spite of the speed-freak editing. Josh Hutcherson has a strong, sorrowful countenance as Katniss' fellow District 12 contestant, Peeta. Stanley Tucci in a blue bouffant as a talk-show host, Wes Bentley in a manicured black-fungus beard as the games' high-tech coordinator, and Donald Sutherland in a white mane as the demonic lion of a president are all you could hope for.

There's a terrific score by James Newton Howard that captures moods — wistful, mysterious — that the director fails to evoke. The Hunger Games leaves you content — but not, as with the novel, devastated by the senseless carnage. It is, I'm sorry to say, the work of moral cowards.