'The Raid': Hand-To-Hand Thrills In A Jakarta Slum

'The Raid': Hand-To-Hand Thrills In A Jakarta Slum 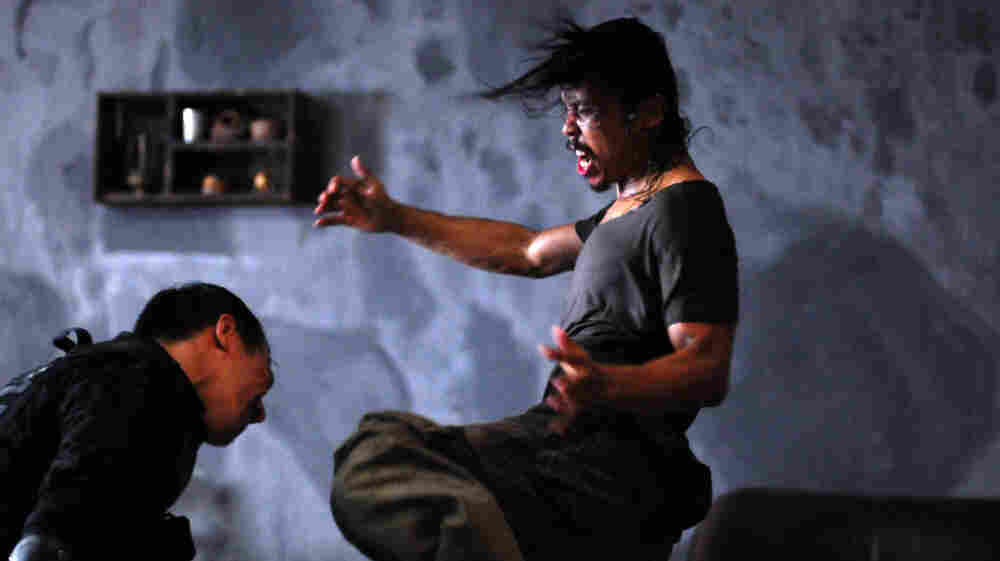 In Indonesian with subtitles

From 'The Raid: Redemption' - 'Preparation'

From 'The Raid: Redemption' - 'SWAT Approach'

From 'The Raid: Redemption' - 'Hallway Fight'

Arguably the most dynamic Asian action film since the 1990s peaks of John Woo and Tsui Hark, The Raid: Redemption works as sheer gladiatorial ballet: An Indonesian SWAT team fights its way, hand to hand and floor to floor, through a towering inferno of a tenement. But this electrifying movie isn't just a collection of gory moments. It actually goes somewhere.

The scenario is simple but effective — and not as complicated as the film's back story: This unexpected breakthrough for Indonesian cinema was made by a Welshman, writer-director-editor Gareth Huw Evans, who sidestepped an apprenticeship in the British film industry by moving to Jakarta.

Evans discovered his star, Iko Uwais, while making a documentary on silat, Indonesia's answer to kung fu. This is the second film they've done together, and the agile Uwais could someday be as beloved in the U.S. as Jackie Chan. First, though, he'd have to reveal a sense of humor.

There's no comedy in The Raid, aside from battlefield flourishes so excessive they summon aghast guffaws. Instead, the movie mixes ferocity and sentiment, a formula familiar from the Hong Kong movies that are among Evans' principal models.

Uwais plays Rama, a rookie cop who is introduced while praying to Allah and doing warm-up exercises, then kissing his pregnant wife farewell. Family will eventually resurface as a theme, somewhat justifying the Redemption subtitle added by the film's American distributor. But first, an hour or so of mayhem.

Rama is part of a team led by Lt. Wahyu (Pierre Gruno), whose motives gradually come into question. The cops are supposed to bust an illicit drug lab and capture a brutal gangster, Tama (Ray Sahetapy), and his lieutenants — Andi (Doni Alamsyah), who's more of a strategist than a fighter, and the aptly named Mad Dog (Yayan Ruhian), who relishes combat for its own sake.

The 15-story pile is full of shabby apartments but has some high-tech touches: Tama can watch the cops' progress on closed-circuit video and address the residents through a PA system. He announces the intruders' location, urging the building's residents to exterminate them.

Soon enough, the policemen realize that something is wrong — and that backup won't be arriving to save them — so they improvise frantically, creating weapons out of everyday objects. Sometimes, though, the only thing that will buy a few more breaths is absolute stillness and silence. It's at moments like this that the movie's immaculate sound design becomes most obvious.

For U.S. release, the film has been outfitted with a new electro-rock score — by Joe Trapanese and Linkin Park's Mike Shinoda — that reportedly sounds a lot like the one it replaced. Yet Evans also knows the power of quiet.

The action's progress from level to level, and the regular appearance of new menaces, suggest a video game, but the movie doesn't rely on computer-generated images or constant cutting to create a sense of chaos; the action is carefully choreographed, and shot with impressive clarity. The violence may be outlandish, but it's always coherent.

Made for less than $1 million, The Raid is notable simply for its technical skill and storytelling mastery. Compared with this movie, most recent Hollywood actioners might as well have been edited with a cheese grater.

As for narrative, there's enough to justify the action and provide an emotional payoff that makes The Raid more than a cheap thrill. Not much more, perhaps, but Evans has two planned sequels to add depth to a franchise that already has more verve than many directors' entire careers. (Recommended)