Accessibility links
Movie Review - 'The Trouble With Bliss' A hapless, unemployed 35-year-old (Michael C. Hall) still living with his father is the focus of a quirk-ridden finally-coming-of-age film. Critic Ian Buckwalter says the self-consciously literary movie, based on a novel by Douglas Light, attempts a clumsy cleverness that can't rise above caricature.

Searching For 'Bliss,' But In Desultory Fashion

Searching For 'Bliss,' But In Desultory Fashion 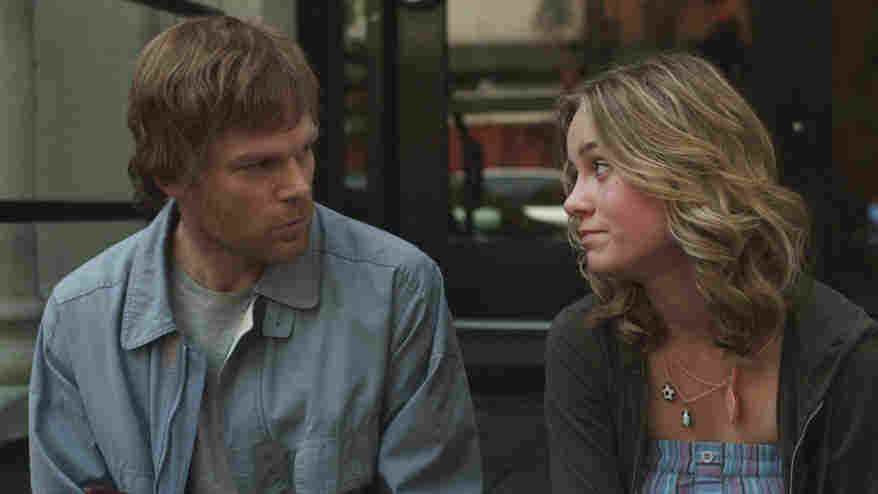 Jobless and wayward, 35-year-old Morris Bliss (Michael C. Hall) initiates a relationship with whimsical and controlling Stephanie (Brie Larson), an 18-year-old who Morris learns is the daughter of an old classmate. 7A Productions hide caption

The Trouble With Bliss

The hapless hero of The Trouble with Bliss, a quirky, self-consciously literary new film by Michael Knowles, has more than just one trouble. But coming in at the top of the list is that he's jobless, penniless and, at the age of 35, still entirely dependent on his father.

By all appearances, he has never strayed far from the East Village walk-up they share, and may never even have held a job. His room is stocked with classic literature and old cassette tapes, along with a world map littered with pushpins marking the places he aspires to visit.

Not that he seems likely to make it much farther than the corner bodega. Morris Bliss (Michael C. Hall) has all the trappings — the listless countenance, the scruffy beard, the unfortunate haircut and the esoteric intellect that masks a fear of actually living — of a recluse in the making. Knowles' film, based on a novel by Douglas Light, is a late-bloomer's bildungsroman, the creaky, backfiring fits and starts of personal growth for someone whose development wasn't so much arrested as atrophied.

At the film's start, we are treated to a clear illustration of Bliss' maturity level, as he watches Stephanie (Brie Larson), the 18-year-old plaid-skirted schoolgirl he has just bedded, post-coitally hopping up and down on his mattress before she goes on an expository, attention-deficient tour of his bedroom.

Her character is familiar: She's kooky and crazy, and challenges him in ways that make his head spin. The only thing making her more of a Manic Pixie Nightmare rather than a dream is that she's also obsessively controlling, with mild stalker tendencies. Making matters worse, her father is one of Bliss' old high-school buddies.

That slight subversion isn't enough to make the stock characters any less tired here, and it's symptomatic of the winking attempts at cleverness that plague the film. Knowles points out his subtext with the subtlety of a blinking neon sign, as in the visual that punctuates a running theme connecting Bliss' level of comfort in the world to the amount of clothing he wears to bed. (He starts the film sleeping on top of the covers in his street clothes, and by the end we're staring at a screen-filling shot of Hall's bare rear as he gets out of bed one morning.)

Moments like these are meant to be funny but elicit mostly eye rolls for their clumsy delivery. One exchange between Bliss and his neighbor Andrea (Lucy Liu) — about his mailbox key not fitting properly in the lock — turns blatantly sexual, but with such a lack of grace that calling it double entendre would be generous.

These characters might be full of color and whimsy on the page — I'm thinking of Bliss' best friend, NJ (Chris Messina), a mustachioed hipster who claims to be recently involved with an international cartel promoting global instability and the sex trade. Or NJ's new fiance, Hattie (Sarah Shahi), a wealthy landlord who plays at being a hippie squatter in abandoned buildings in her spare time.

But without the time or space to flesh them out more, their quirks seem labored and forced. Without much actual character to latch on to, most of the actors seem lost and awkward, even the usually dependable Hall. The only one here with a glimmer of recognizable humanity is Peter Fonda as Bliss's long-suffering father — and even he spends most of the movie battling caricature.

It's easy to be left wondering why anyone should care about this particular sad sack. He's no everyman; he's not particularly sympathetic, and it's not entirely clear what he's done to warrant what transformation he eventually undergoes, apart from the fact that he does finally — as he tells his father with rather underwhelming pride — make a choice.

His father looks at him with what appears to be a wistful fondness in that moment, but I think maybe he's just happy that his son might finally be getting out of his hair. Or maybe that was just me.