Accessibility links
Airlines, Fliers Seek To Fit More In Overhead Airline passengers don't like baggage fees. To avoid them, they often haul as much carry-on luggage onto the plane as they can manage. Airlines aren't backing down on the fees, but they are expanding their overhead bins to acknowledge the new reality. 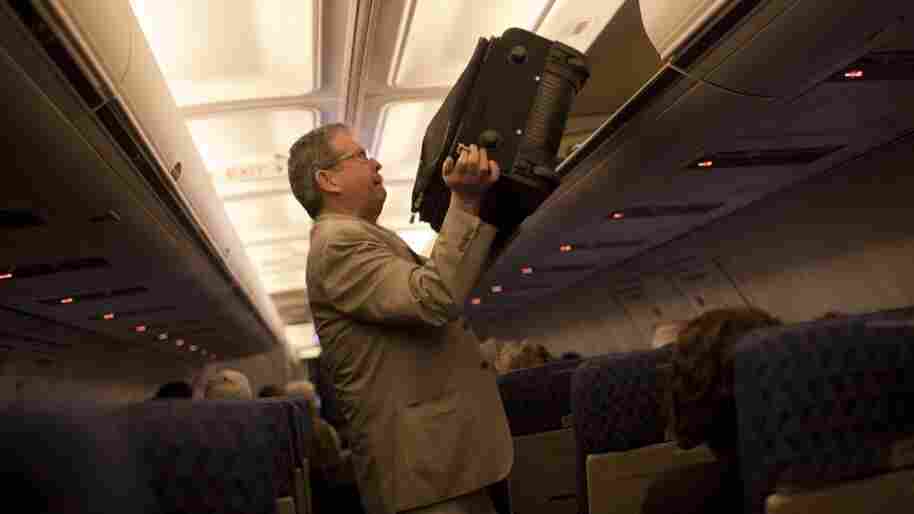 A passenger puts his luggage in the overhead bin on an American Airlines flight out of John F. Kennedy Airport in Jamaica, New York. Robert Nickelsberg/Getty Images hide caption 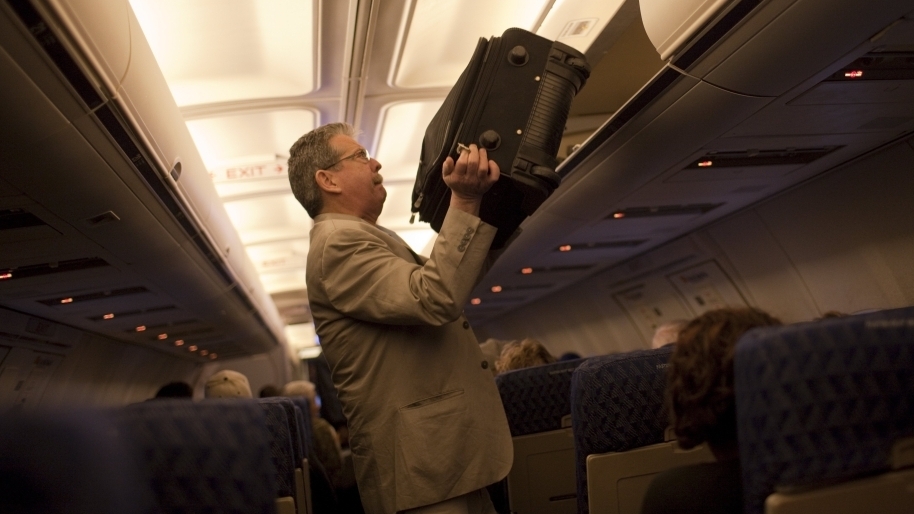 A passenger puts his luggage in the overhead bin on an American Airlines flight out of John F. Kennedy Airport in Jamaica, New York.

Airlines started charging fees for checked bags a few years ago. Now passengers are testing the limits of what they can carry onto planes. Some flight attendants say it's getting out of hand. But airlines are trying to address the problem with bigger overhead bins.

Sisters Molly and Jess Nelson are scheming with their parents, Sue and Scott, about what to cram into a big black suitcase. It's the only bag the family will pay for between the four of them on their trip from Minneapolis to San Diego.

"Well, I was thinking we could share one of those backpacks because it's pretty big," Jess says. But Molly isn't so sure about that plan. "I packed a lot, though, so I'm going to need my own bag," she says.

Besides the shared bag, they will each bring carry-ons. And they have a special trick: they use duffel bags that don't have hard spines. Jess says they're malleable enough to squeeze into overhead bins — more or less.

How To Minimize Bag Fees

With most American airlines now charging for checked baggage on domestic flights, it's becoming more and more difficult to avoid extra charges. One way to get around the fees is to join an airline's member program or fly often — many membership and frequent flier programs offer complimentary checked baggage and discounts. Some people also ship items ahead of time, but that works better for longer trips. Another way to cut down on fees is to become a better packer, and experts around the Web have advice on how to do that. Doug Dyment runs an entire website devoted to the topic, the New York Times went to a flight attendant for tips, and musician Shaun Huberts has written an entire book on the topic.

"I feel like it's right on the edge of fitting as a carry-on," Jess says. "When I'm stuffing it up there, I always feel like people are like, 'That shouldn't be here. It's too big.' "

Airlines introduced checked-bag fees in 2008, when fuel prices were hammering them. Southwest doesn't charge for the first two checked bags, but most others do — usually about $25 for the first bag and $35 for the second.

That has prompted many travelers like the Nelsons to devise clever ways of using only carry-ons. Some try to get their overly large carry-ons through security and keep their fingers crossed that they'll get to check the bags at the gate without a fee.

Linda Verboom, a flight attendant based in Washington, D.C., says one strategy can leave a passenger looking like the Michelin Man. She has seen passengers wear tons of layers so that they don't draw scrutiny with bulky carry-ons.

"I did have a young girl come on recently that was wearing a pair of leggings, a pair of shorts and a skirt, several T-shirts, and one of those zip-up hoodies to try to get as much on board as she possibly could and later started to undress and to roll everything up and put it into her suitcase," Verboom says.

Verboom says messing around with carry-ons can delay departures and distract flight attendants when they're supposed to be looking out for suspicious activity.

"There's a long list of things we're supposed to be watching out for during boarding," Verboom says. "Few of those things can be accomplished when you're in the middle of the aisle wrestling a bag in or out of an overhead bin."

The union she belongs to, the Association of Flight Attendants, made that argument in a hearing Tuesday held by the Senate Appropriations Subcommittee on Homeland Security.

The union says the Transportation Security Administration should take over the job of enforcing a one carry-on, one personal item limit. That's already the rule, but the flight attendants say airlines don't enforce it uniformly. In addition, while most airlines require carry-on bags to be about 45 inches of combined height, width and length, they can ask the Federal Aviation Administration to allow bigger dimensions. The group says that would help curb the "carry-on chaos" flight attendants have to deal with.

But airlines are taking their own steps to deal with carry-on issues. Gate agents are looking out for bags that are too big. And some airlines, like American, United, Delta and US Airways, are expanding the size of their overhead bins.

Some travelers may wonder, why not just incorporate the cost of checked bags into the ticket price and not charge the extra fees?

"It would be much simpler if it were that way," says Tim Smith, a spokesman for American Airlines. Smith says if his airline did that, it would look a lot more expensive than other carriers on fare comparison sites. That could be deadly.

"Experience has shown us that shoppers will walk across the street for as little as a dollar or two difference," Smith says.

And he says some people prefer the a la carte pricing where they only pay for checked bags if they need them. On the whole, fliers actually do have a lot of ways to dodge bag fees. Some elite flier and credit card programs waive them.

Smith says only about 25 percent of passengers actually pay the bag fees. But airlines probably don't want to part with the fees they do collect.

Henry Harteveldt, an airline and travel analyst at Atmosphere Research Group, says that last year, the airline industry's profit margin was only 0.3 percent, and probably would've been worse without baggage fee revenues. That makes the use of bag fees crucial.

In other words, don't expect bag fees to go away any time soon.