Accessibility links
The Nation: Still Fighting 'Eisenstadt v. Baird' The Obama Administration's mandate for health care providers to include contraceptive coverage has upset many. Jonathan D. Moreno and Frances Kissling of The Nation argue that opposition to the Affordable Care Act's birth control mandate is actually about sexual liberty. 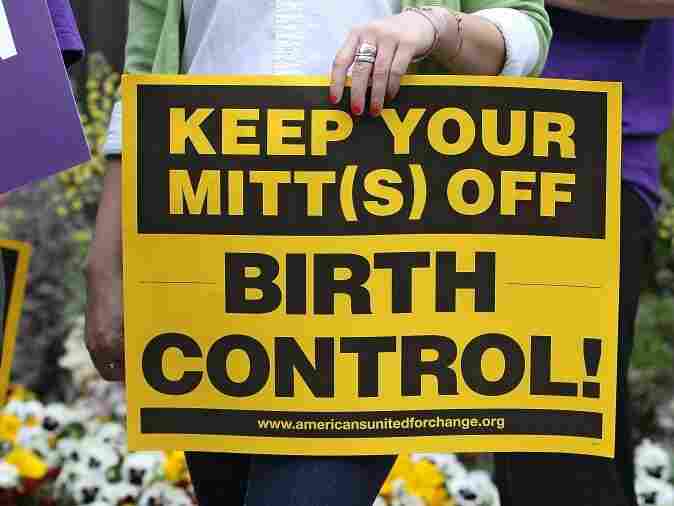 A women participtes in a protest outside of the Hyatt Regency where Republican presidential candidate Mitt Romney was sheduled to attend a fundraiser on March 22, 2012 in Washington, DC. Supporters of Planned Parenthood participated in the protest against Romneys position on women's health care. Mark Wilson/Getty Images hide caption 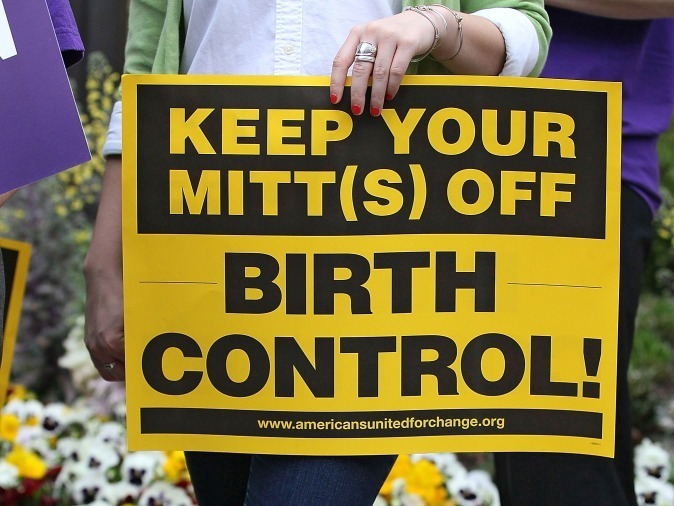 A women participtes in a protest outside of the Hyatt Regency where Republican presidential candidate Mitt Romney was sheduled to attend a fundraiser on March 22, 2012 in Washington, DC. Supporters of Planned Parenthood participated in the protest against Romneys position on women's health care.

Read Another Opinion On Contraception Coverage

While efforts to overturn Roe v. Wade or chip away at abortion access are frequently covered in the media, a longstanding, under-the-radar effort of a number of social and religious conservatives to limit access to contraception has escaped notice — until now. In fact, until recently, any mention of these efforts has been taken as a sign of paranoia or Catholic bashing. Contraception, used by 99 percent of women at some time in their reproductive lives and approved of by just about everyone except the Catholic bishops and the most extreme social conservatives, has for 40 years been considered a settled issue. The FDA approved the birth control pill in 1960 and in 1965 the Supreme Court affirmed the right to use contraception in Griswold v. Connecticut.

The healthcare reform process has inadvertently undermined that comfortable assumption. The US Conference of Catholic Bishops, the Republican Party and Rush Limbaugh have all claimed that the inclusion of contraception among a long list of preventive services that employers must insure without cost or co-payments by employees violates religious freedom. For a few weeks it seemed America's pundits and even some liberal Catholics, like E.J. Dionne, bought the argument. A deft accommodation by Obama that left religious employers with clean hands and turned the provision of the coverage over to the insurance companies did not, however, end the effort to get contraceptive coverage out of the Affordable Care Act. Nonetheless, state legislatures and the most extreme members of the Senate have introduced legislation that would effectively overturn the mandate and grant wide latitude to both religious and secular employers to refuse to provide coverage for contraception. Arizona is considering a bill that would not only require female employees to assure the employer they want birth control for other than contraceptive reasons but would also permit the employer to fire them.

The commonplace belief that the debate over contraception was settled is now unsettled. Perhaps that's because the settlement is both socially and legally more recent and less assured than we think, especially for the rapidly growing number of singles.

The case was Eisenstadt v. Baird, which, as the historian David Garrow has pointed out, is "relatively unheralded" as a link between Griswold and Roe v Wade. Eisenstadt was a Massachusetts case (yes, the one state that gave its electoral votes to George McGovern later that year), triggered by activist Bill Baird's act of civil disobedience, providing contraceptive foam to a woman at Boston University. It was only one of a number of arrests Baird had invited during his multi-year crusade on behalf of legalization of access to contraceptives. While working for a medical supply company, on a visit to a hospital where he was demonstrating equipment, he had seen a woman die with a piece of coat hanger stuck in her cervix.

Had Eisenstadt not been so quickly followed by Roe v Wade, surely those morally opposed to unmarried sex would have been more engaged in public efforts to overturn that decision, but their horror over the affirmation of a right to chose abortion took precedence.

And Eisenstadt was left alone. But it is Eisenstadt — which created the right of unmarried people to use contraception — that social conservatives are now attacking. It is sexual activity by certain groups that is unacceptable. In the early twentieth century, those with poor genetic prospects were the ones whose sexual activity and reproduction was unacceptable. The eugenics movement dominated. Before World War II, many opposed contraception both because it violated "natural law" but also, openly, because it would likely mean a decline of the relative numbers of white people. C.S. Lewis, an iconic figure among conservative Christian intellectuals, whose Chronicles of Narnia have charmed so many children, was at best poorly disposed to contraception because, he reasoned, it represented the tyranny of the living over those not yet alive, as well as the prospect of promiscuity. But another skeptic of "family planning" was that exemplary anti-fascist George Orwell, apparently out of fear about the decline of manliness following the catastrophic losses of the best male British stock in the Great War. Eugenic arguments are now focused on race rather than mental disabilities. Single black women are especially targeted.

But in the current round of opposition to contraception, all sexually active single women — and especially and paradoxically single women who have children — are suspect. When John King asked Rick Santorum why he thought contraception was "dangerous," Santorum talked at length about the "problem in our culture with respect to children being raised by children, children being raised out of wedlock, and the impact on society economically, the impact on society with respect to drug use and all — a host of other things when children have children." Santorum's overwrought moralism betrayed his confusion: these problems follow from the lack of access to contraception by the young and poor, not access to it.

For his part, Romney wants to get rid of Planned Parenthood, which of course is where poor women and teens obtain contraception. We can hear an echo of the eugenics movement in Santorum's rant: instead of embracing contraception as a way to keep "undesirables" from having children, social conservatives want them to stop having sex.

Limbaugh, on the other hand, represents the ongoing fear of liberated women, uncontrolled by the civilizing aspect of marriage and husband. In Liberty and Sexuality, Garrow quotes extensively from conservative commentators who claim that Eisenstadt was intended to legitimize sexual liberty and to extend separate the privacy right from marriage and family. Privacy, up to then, was essentially a patriarchal concept with the family as the property of the husband. Limbaugh expresses the same sentiment in cruder ways. Sexually active women who are freed from the fear of pregnancy are "sluts." Had Sandra Fluke, the 30-year-old single Georgetown Law student, been married, would Limbaugh have ranted that she wanted us to "pay for her to have sex?" We doubt it.

(Just days later Limbaugh wondered about Tracie McMillan, who had just won a literary prize: "What is it with all these young single white women? Overeducated doesn't mean intelligent.")

Indeed, the opposition to the Affordable Care Act's no-cost birth control mandate is not actually about contraception or religious freedom but about sexual liberty. Garrow notes that several of the clerks for the Eisenstadt justices suspected sexual freedom was as much a part of the thinking of the justices as was the shadowy penumbra of privacy rights that were explicitly cited. It is about those whose consensual sexual unions are not legitimized by a state or sanctified by a faith. Today more women are simply eschewing marriage or postponing it, as well as postponing childbearing, than ever before, yet a simmering unease about unmarried sex remains.

Only forty years have passed since Eisenstadt. No social change that young can but have its frailties. If we are seduced into thinking otherwise, it is partly because our memories are short. Take, for example, that young man who was studying law at Harvard at the time of Eisenstadt, just down the road from Boston University. In the Jan. 12 Republican debate Mitt Romney said that he "can't imagine a state banning contraception." Allowing for the limits of Romney's imagination or his memory, he was later to be the governor of the state that in 1967 invoked its own prohibition of contraception for unmarried people and sent Bill Baird to prison.

Presumably, Romney was expressing the view that that was then and this is now. But can we be so sure? Will Rogers said, "The short memories of American voters is what keeps our politicians in office." Or perhaps puts them there.