Accessibility links
Movie Review - 'The Hunger Games' - Mortal Combat As Appointment TV Jennifer Lawrence stars as Katniss Everdeen in the big-screen adaptation of Suzanne Collins' best-selling novel, in which random teens are forced to fight to the death in a televised tournament. Critic Bob Mondello says Lawrence's tough, smart performance is the biggest asset in an engaging film. 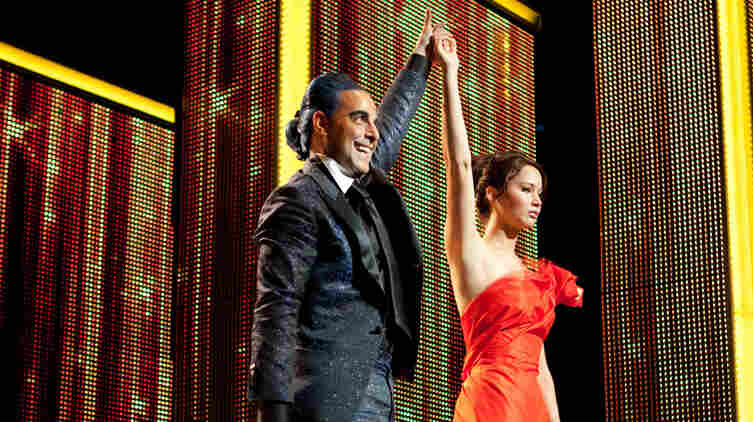 Are You Not Entertained? TV host Caesar Flickerman (Stanley Tucci) takes the celebrity interview to new lows when chatting up the young combatants in the to-the-death Hunger Games — including Katniss Everdeen (Jennifer Lawrence). Lionsgate hide caption

From 'The Hunger Games' - 'Friends'

Hungry for a good dystopia? Well, as you may be gathering from reports of the millions of tickets sold before prints were even shipped to theaters, author Suzanne Collins has a feast for you in the first movie installment of her young-adult trilogy The Hunger Games.

In the novels, she imagined a society called Panem, built on the ruins of a war-torn, climate-ravaged North America, and it's been efficiently brought to screen life — a totalitarian society where the war's victors live in a shining city on a hill and keep the losers — the 99 percent? — in the direst poverty, living in 12 variously starving and miserable districts.

The 1-percenters can't help rubbing their dominance in, and Collins' central notion — reportedly inspired by channel-surfing between reality shows and news reports of the wars in Afghanistan and Iraq — is that to be sure the losers never forget how completely they've been subjugated, the Capitol stages a televised ritual each year: kids fighting kids to the death.

It's called the Hunger Games, and it requires each district to provide two "tributes" between the ages of 12 and 18, a boy and a girl selected by lottery to battle in a huge arena where cameras capture their every feint, thrust and death throe.

It's the ultimate TV game show: required viewing for the subjugated masses — an effective way for a totalitarian few to say, "If we can kill your kids for sport, what else might we do?" — and cheery entertainment for the privileged few in the Capitol.

First place gets the winner a life free from starvation. Second place ... well, there is no second place. But as everyone keeps saying, "May the odds be ever in your favor."

The tributes we follow hail from District 12, which looks a lot like Dorothea Lange's photos of Depression-era Appalachia. The names pulled from a fishbowl at the "reaping" are those of a baker's son (Peeta Melark, played by a bland but serviceable Josh Hutcherson), and a coal miner's daughter named Primrose (Willow Shields), who's so afraid of her own shadow that she wouldn't last two minutes in the arena. Knowing that, her older sister, Katniss (Jennifer Lawrence), volunteers to take her place.

Volunteers, that is, to be slaughtered on television in front of all of Panem — a great TV moment, wouldn't you say? And one that's captured on lots of on-screen screens so you won't miss that point. In the novel, it's easy to forget about the TV cameras, because 16-year-old Katniss is the narrator, and when she plunges into the arena you plunge in with her — a level of engagement most filmmakers would (pardon the expression) kill for.

Spiders And Fighting And Trees, Oh My: Filming 'The Hunger Games'

The 'Games' We Play — In Panem, And Here

Director Gary Ross (who shares screenplay credit with Collins and Billy Ray) wants a different sort of audience buy-in. He keeps cutting to blue-haired TV host Caesar Flickerman (Stanley Tucci, unctuous and clearly enjoying himself) to emphasize what you might call a celebrity-TV-on-steroids creepiness. This is, after all, kids killing kids as entertainment — American Idol with knives — and once the games begin, we in the movie audience will be as guilty of being entertained as the folks in the Capitol: To root for Peeta and Katniss, after all, is to root for other kids to be slaughtered (albeit in violence so sliced and diced in the editing room that it's earned a PG-13 rating).

The film's biggest asset is Lawrence, who makes Katniss just as tough and smart as the last coal miner's daughter she played — in Winter's Bone, where she took home an Oscar nomination for doing many of the same things she does here. (Shooting small game in the rural wilds, for instance, to provide for younger siblings and an ineffectual mother.)

If you're older than the film's target audience, that won't be the only outside reference that'll occur to you as you watch the film. There's the dressing-up-to-be-selected-to-die scene from the short story The Lottery; the Wizard of Oz by way of Dr. Seuss hairstyles and fashions of the Capitol; the plot that mirrors the Japanese teen flick Battle Royale, and a generous helping of fall-of-Rome references, from the tributes' introductory chariot ride through the streets of the Capitol to such sibilant character names as Cinna, Seneca and Caesar to the name of the country itself: Panem, which sounds like a shortening of Pan American but is actually from the Latin "panem et circenses," for "bread and circuses."

The cribbing from real-world and literary sources is so wide-ranging, in fact, that when Katniss is being coached for her first TV interview by a tipsy Woody Harrelson (largely wasted as District 12 mentor Haymitch) and a pansexually seductive Lenny Kravitz (making a substantial impression with very few lines but some fetching gold eyeshadow), it might occur to you that there's a Pygmalion thing going on with her makeover. Not because anyone's humming "The Rain in Spain" while she's being dressed to kill, but because The Hunger Games — like the Potter and Twilight franchises — is such a relentless aggregator of pop-culture references that you figure the connection must've occurred to someone.

Though the filmmakers have made some modestly interesting casting choices — both tributes from District 11, for instance, are what I suppose you'd have to call African-Panemian, something Collins doesn't hint at in the novel — the movie doesn't actually have a lot to say about the social issues it brings up. And its literalness did make me question things I hadn't while reading the book — say, that a society with hovercraft and digitally created carnivores is still this dependent on coal?

Still, The Hunger Games' pacing is brisk, its stakes as high as stakes get, and its leading lady engaging enough that the odds — at the box office at least — will be ever in its favor.