Accessibility links
Fannie, Freddie Consider Mortgage Write-Downs Fannie Mae and Freddie Mac have concluded that giving homeowners a big break on their mortgages would make good financial sense in many cases, NPR and ProPublica have learned. 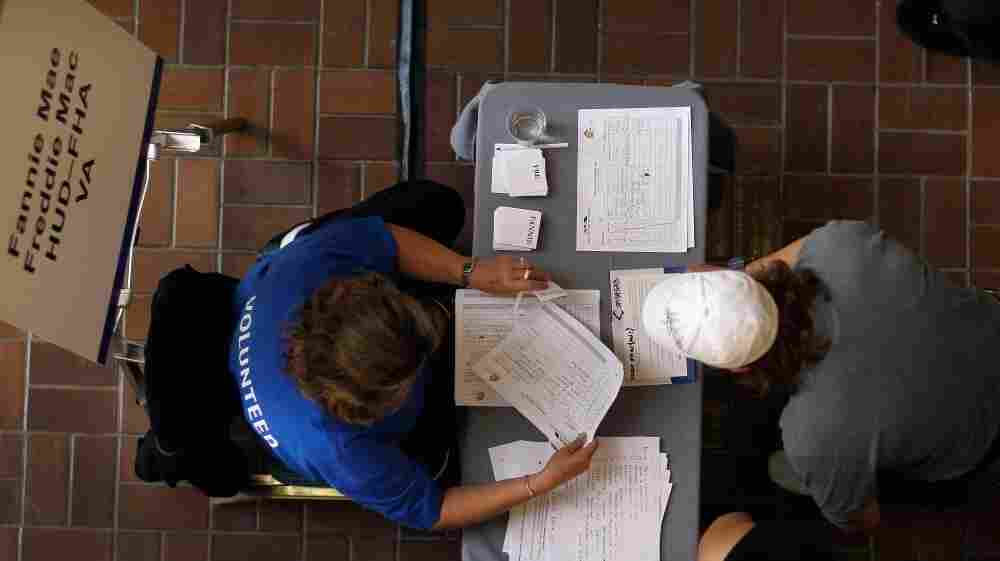 An Update On This Story

On Friday, following the publication of this story by NPR and ProPublica, lawmakers called on the Federal Housing Finance Agency to provide Congress with the new analysis on principal reductions by Fannie Mae and Freddie Mac. And Illinois Attorney General Lisa Madigan called on the FHFA to "immediately implement appropriate principal reductions to home loans held by Fannie Mae and Freddie Mac."

The two most powerful entities in the housing market — Fannie Mae and Freddie Mac — could be on the verge of a significant change regarding foreclosures. NPR and ProPublica have learned that both firms have concluded that giving homeowners a big break on their mortgages would make good financial sense in many cases.

In these so-called principal write-downs, a portion of the loan is forgiven for someone who's having trouble paying. Many Democrats are pushing for this change. Most Republicans are against it. So far, a key federal regulator is blocking Fannie and Freddie from adopting the approach.

In recent days, financial executives at Fannie and Freddie have made presentations to their regulator saying that principal reduction for many homeowners would prevent larger losses and keep people in their homes.

"As I have stated previously, FHFA is considering HAMP incentives for principal reduction and we have been having discussions with the Enterprises [Fannie Mae and Freddie Mac] and Treasury regarding our analysis. FHFA's previously released analysis concluded that principal forgiveness did not provide benefits that were greater than principal forbearance as a loss mitigation tool. FHFA's assessment of the investor incentives now being offered will follow the previous evaluation, including consideration of the eligible universe, operational costs to implement such changes, and potential borrower incentive effects. As we complete the review, the public should understand that Fannie Mae and Freddie Mac continue to offer a broad array of assistance to troubled borrowers and have continued to implement HARP 2.0 to enhance refinancing opportunities for underwater borrowers. FHFA remains committed to its legal responsibilities as conservator to ensure assistance is offered to troubled borrowers while minimizing losses to taxpayers."

Watch a video of the FHFA's DeMarco testifying before the Senate Banking Committee on Feb. 28.

Read a blog post by Mark Calabria, director of financial regulation studies at the libertarian Cato Institute, in support of the FHFA's DeMarco.

This is a big development in a charged political issue. Some economists and many Democratic lawmakers see principal reduction as a powerful tool for helping the housing market.

"Principal reduction works," says Mark Zandi, chief economist of Moody's Analytics. "If someone gets a reduction in their principal amount, it gives them a powerful hook to really fight to try to hang on to the home and not go into foreclosure."

That's 300,000 to 500,000 homeowners getting a big break on their mortgage. Zandi says that could do a lot to tip the housing market toward recovery — and thereby help the whole economy.

Other economists disagree. And Fannie and Freddie's regulator has so far refused to allow this approach. Ed DeMarco, the head of the Federal Housing Finance Agency, controls Fannie and Freddie following a giant federal bailout of the two companies. At a recent Senate hearing, DeMarco said he wants to prevent foreclosures.

"But we need to do so in a way that we are meeting our mandate to protect the taxpayers," he said.

A Conflict At Freddie Mac?

In other words, he needs to be a good steward of taxpayer money. Last month, DeMarco testified that Fannie and Freddie themselves told him that they didn't support principal reductions.

"Both companies have been reviewing principal forgiveness alternatives. Both have advised me that they do not believe it is in the best interest of the companies to do so," he said.

But now Fannie and Freddie appear to be saying the opposite. In part that's because the Obama administration has recently tripled the incentives it offers to lenders who do these principal write-downs. So now, in many cases, if a lender writes off, say, $50,000 of principal, the government will reimburse half that — $25,000.

That's a lot of taxpayer money. Many Republican lawmakers don't like that. And some economists hope DeMarco stands his ground.

"I think DeMarco is absolutely right," says Anthony Sanders, a professor at George Mason University. He says that if Fannie and Freddie start forgiving big chunks of what many people owe on their mortgage, they risk triggering a huge wave of strategic defaults. That is, people who don't really need the help would default on purpose to try to get it.

Critics say that could result in a near cataclysmic mess. Hundreds of thousands of people could stop paying their mortgages. And they would flood their lenders with calls, stumbling over each other to try to get free money.

"That's going to take a lot of manpower to try to sort through these — who actually needs one and who just wants a principal write-down at taxpayer expense," Sanders says. "This could blossom into something really ugly."

Still, the private sector has already been doing many more principal write-downs — by one count, 15 percent of all recent loan modifications. And proponents say so far the sky isn't falling.

For his part, DeMarco told NPR in a statement that the FHFA is now considering these new incentives and whether they change his agency's prior analysis of principal reduction. He added, "Fannie Mae and Freddie Mac continue to offer a broad array of assistance to troubled borrowers."

Meanwhile, political pressure on DeMarco is building, at least from Democrats. More than 100 lawmakers have signed a letter asking him to reconsider and allow principal reduction.

NPR's Chris Arnold reported this story in partnership with Jesse Eisinger of ProPublica.