Accessibility links
Mali's Coup: Echoes From A Turbulent Past The military coup in Mali brings back unhappy memories of a time when such overthrows were common in Africa and Latin America. The past two decades have seen stronger democratic institutions in both regions, but the Malian coup is a reminder that such gains can be reversed.

Mali's Coup: Echoes From A Turbulent Past

Mali's Coup: Echoes From A Turbulent Past 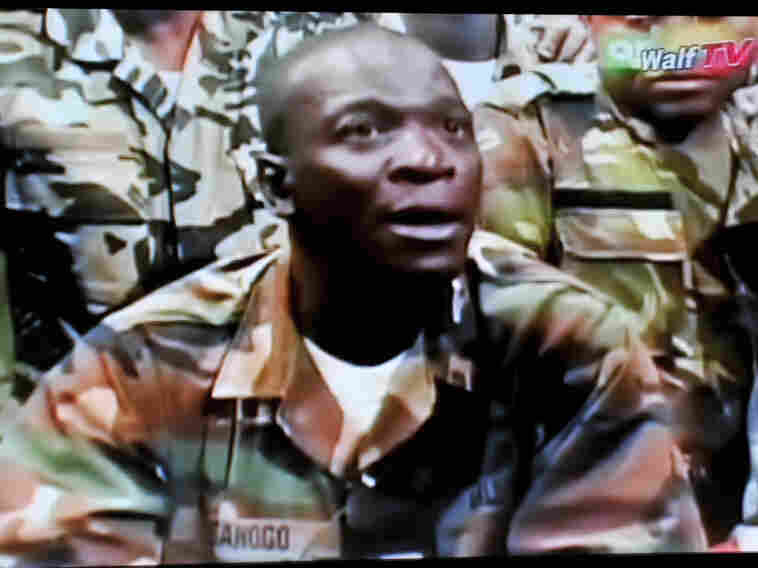 The leader of the junta that seized power in Mali, Army Capt. Amadou Sanogo, announces a curfew in the capital, Bamako, on Thursday, in this photo taken from television.The coup ousted an elected president who was due to step down after a new election next month in the West African nation. Issouf Sanogo/AFP/Getty Images hide caption 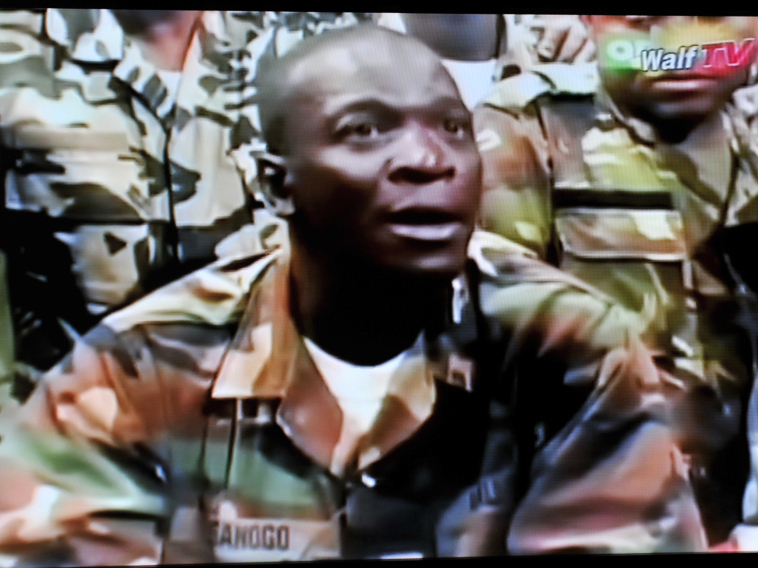 The leader of the junta that seized power in Mali, Army Capt. Amadou Sanogo, announces a curfew in the capital, Bamako, on Thursday, in this photo taken from television.The coup ousted an elected president who was due to step down after a new election next month in the West African nation.

The scene in Mali's capital, Bamako, shows what used to be a familiar sight: an African capital in chaos, with drunken soldiers firing into the air and looting government buildings in the wake of a coup.

Military coups were dishearteningly common for people in Africa and Latin America during the 1960s and '70s, as governments fell to opportunistic military men.

But that trend had been slowing in the past two decades, as more and more governments began to hold regular elections.

There were 17 major elections in African nations last year alone. This year, a dozen African countries are set to vote for presidents.

Mali itself was held up as one of those countries that had seemed to turn the corner when it came to democracy.

The "Soldier Of Democracy"

The current president, Amadou Toumani Toure, was a former paratrooper who seized power in a 1991 coup. But he yielded authority to elected politicians after a little more than a year.

After retiring from the Army, Toure won the presidency in 2002 and was re-elected in 2007.

Both elections were generally regarded as free and fair by foreign observers.

Toure said that he would abide by the country's constitutional two-term limit, and he was not running in the presidential election that was scheduled for the end of April.

Analyst Mathurin Houngnikpo says Mali fell victim to "a lethal mixture" of circumstances that worsened after the fall of dictator Moammar Gadhafi in neighboring Libya.

Gadhafi had employed many members of Mali's Tuareg ethnic group as mercenary fighters. When rebels overthrew the dictator last August, the mercenaries returned to the deserts of northern Mali, bringing with them looted weapons from Gadhafi's arsenals.

A Primer On Mali's Coup

The Soldiers: Troops seized control in the capital, Bamako, on Thursday, saying President Amadou Toumani Toure was not doing enough to stop an insurgency by rebels in the country's north.

The President: Toure seized power in a 1991 coup, but relinquished power. He was elected in 2002 and re-elected in 2007. He was due to step down following an election next month. He is believed to be hiding in Mali.

The Issue: Members of the ethnic Tuareg group had fought for Libyan leader Moammar Gadhafi. When Gadhafi was ousted last year, the Tuareg fighters returned to Mali and launched an insurgency.

African Democracy: African nations have been holding elections with much greater frequency in recent years, but Mali's coup represents a setback.

Since then, they have been fighting for a separate country in the north.

"The Tuareg have been making demands for ages," says Houngnikpo, who studies civil-military relations at the Africa Center for Strategic Studies in Washington. "This is the first time they have posed such a dangerous military threat."

The army mutineers who seized control of Mali's government say they have been taking heavy casualties in the recent fight against the Tuareg rebels, because Toure never provided them with adequate weapons or resources.

Mali has also been fighting an offshoot of al-Qaida, which calls itself the Al-Qaida Organization in the Islamic Maghreb, designated as a terrorist group by the U.S. State Department.

The coup is a worrisome development for West African analysts such as Jennifer Cooke, head of the Africa Program at the Center for Strategic and International Studies.

Cooke says the coup is "a major setback to Mali's political development," especially disturbing after the country had won a reputation for the growth of its democratic institutions and economic reforms.

Cooke says the disruption will hamper the fight against the Tuareg rebels. And on Friday, word came that the rebels had advanced southward and occupied a strategic government military camp.

A wider concern is what effect the coup may have on neighboring countries.

Witney Schneidman, a special adviser to the Africa Growth Initiative at the Brookings Institute, notes that the governments in the neighboring countries of Senegal, Guinea and Cote d'Ivoire are "all fragile."

Senegal faces a presidential runoff election on Sunday, amid controversy over whether the incumbent president is constitutionally allowed to run for a third term.

Analysts worry that turmoil in Mali could spill over into its neighbors.

Schneidman points out that the Tuareg rebellion is creating a growing number of refugees, some of whom have been moving into neighboring Niger.

That, in turn, exacerbates food shortages.

"Oxfam has estimated there could be up to 3 million Malians facing food security problems," Schneidman says.

Despite the dangers, though, all three analysts point out that the coup drew strong condemnation from the international community, and especially from organizations of African nations, such as the African Union and ECOWAS. 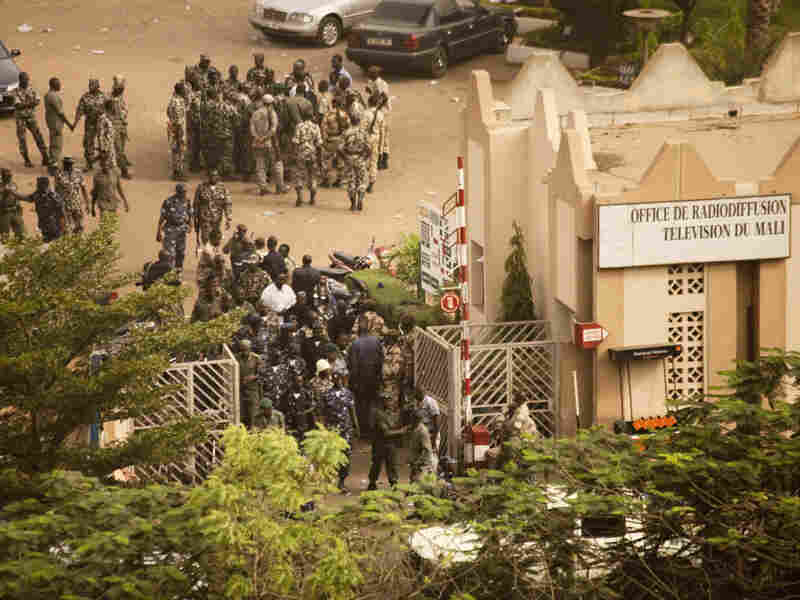 Soldiers gather at the offices of the state radio and television broadcaster after announcing a coup in Mali's capital, Bamako, on Thursday. The soldiers said they ousted the president because he wasn't doing enough to halt a rebel insurgency. Malin Palm/Reuters/Landov hide caption 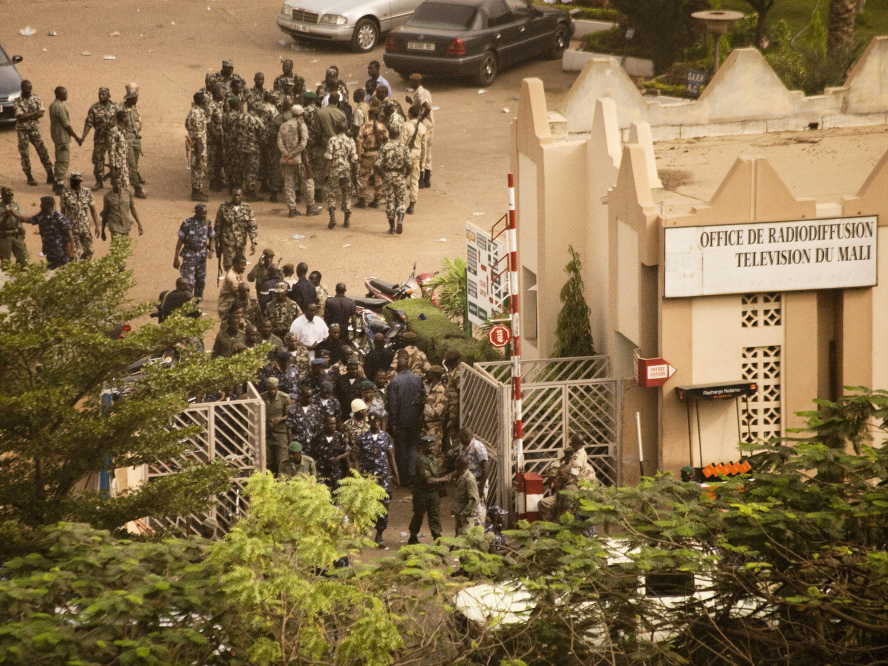 Soldiers gather at the offices of the state radio and television broadcaster after announcing a coup in Mali's capital, Bamako, on Thursday. The soldiers said they ousted the president because he wasn't doing enough to halt a rebel insurgency.

The African Union has suspended Mali and will send a mission to Bamako to assess the situation, The Associated Press reported.

ECOWAS, the Economic Community of West African States, is composed of 15 member nations, from Senegal to Nigeria. Mali is a member state, and the group immediately condemned the coup "as a usurpation of power from a democratically elected government."

ECOWAS declared that the military mutineers were "alienated and outlawed" from the community of nations, and called on them to restore power to the government.

The World Bank, the African Development Bank, and a U.S. aid agency, the Millennium Challenge Corp., have all suspended funds or operations in Mali, a move that could amount to a significant hit to the country's economy.

In the meantime, the mutineers have been issuing defiant statements and have been trying to arrest Toure, who is believed to be under the protection of loyal soldiers in the capital.

As Houngnikpo puts it, there doesn't seem to be an immediate danger of a domino effect in neighboring nations, "but it's not good news for democracy at all."