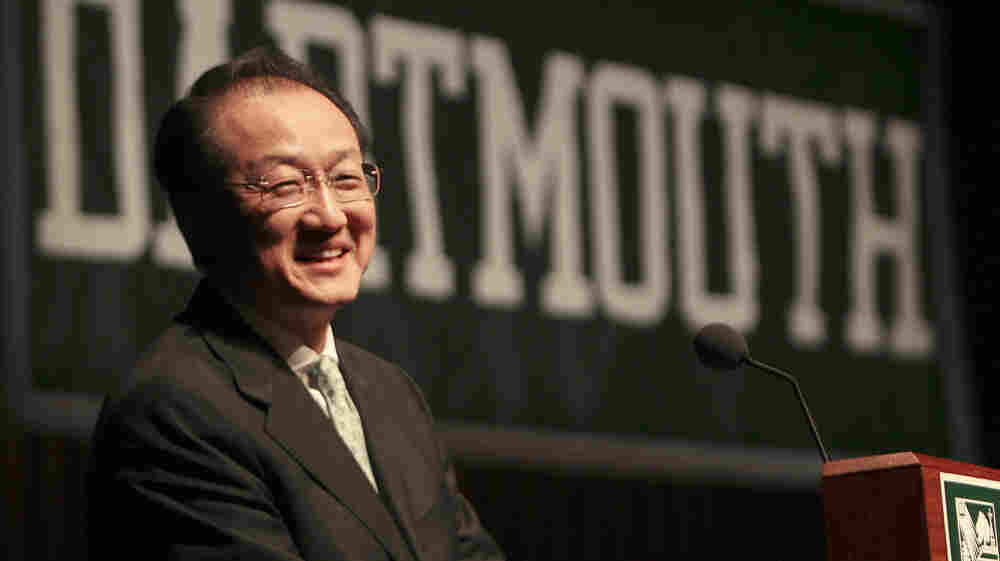 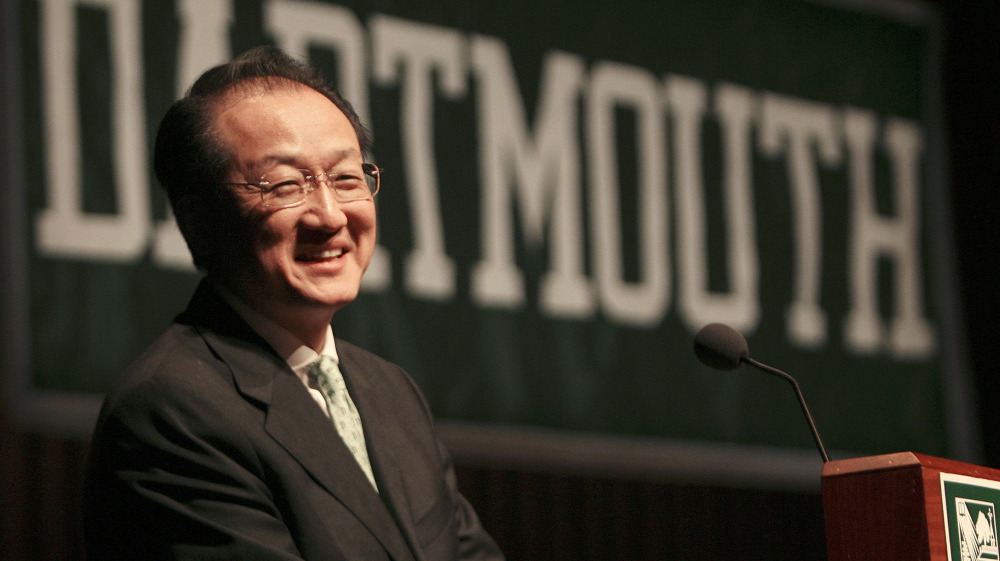 Dr. Jim Yong Kim is introduced as the new president of Dartmouth College in Hanover, N.H., in 2009.

Jim Yong Kim, President Obama's nominee to be the leader of the World Bank, is an unconventional choice. As a global health expert, he's a medical doctor who helped start an international health organization. He currently serves as president of Dartmouth College.

"Despite its name, the World Bank is more than just a bank," Obama told reporters during the White House announcement Friday morning. "It's time for a development professional to lead the world's largest development agency."

Along with medical school classmate Paul Farmer, Kim helped found the international aid organization Partners in Health, which provides care to patients in more than a dozen countries.

In a telephone interview from Rwanda, Farmer said Kim has a "big picture" understanding of the connections between health, poverty and development around the world.

"What are the larger forces that make people sick, or keep them from being in ill health?" Farmer asked. "These have been the very questions that have obsessed Jim his entire adult life."

He received a B.A. from Brown University and later an M.D. from Harvard Medical School, in 1991, followed by a Ph.D., also at Harvard, from the Anthropology Department two years later. Kim worked in Peru during the 1990s to combat drug-resistant tuberculosis. He later led the World Health Organization's HIV/AIDS department. Since 2009, he has served as president of Dartmouth College.

His wife, Younsook Lim, is a pediatrician at Children's Hospital Boston. They have two children.

Kim led an ambitious effort at the World Health Organization to provide AIDS treatment to some 3 million patients by 2005. While the campaign fell short of that goal, experts say it helped lay the foundation for even larger treatment efforts now under way.

"The idea was even in the poorest of settings in places like rural Africa, people with AIDS not only deserve treatment but can be treated effectively," Farmer said.

Kim was also chairman of the Department of Global Health and Social Medicine at Harvard Medical School. While much of Kim's doctoring lately has been at the policy level, Farmer said he will also bring to the World Bank decades of hands-on field experience, working in places like Rwanda, Peru and Haiti.

"Jim makes this fairly easy passage — easy for him — between settings of great privation and the corridors of power where decisions are made," Farmer said.

The final decision about who should serve as World Bank president will be made by the bank's board. The post has always been held by an American, though some of the 187 member countries want to change that. Several African nations want Nigerian Finance Minister Ngozi Okonjo-Iweala to head the bank. But Kim is likely to get the job.

In announcing the nomination, Obama cited not only Kim's global experience but also his personal story. Kim was born in South Korea and came to the United States with his parents as a 5-year-old.

"Jim went on to become president of his high school class, the quarterback of the football team, the point guard of the basketball team," Obama said. "I just found out he has a 5 handicap in golf. I'm a little resentful about that last item but he does it all."

As president of Dartmouth, Kim even sings, dances and raps — wearing a white leather jacket and shades — in a Dartmouth Idol video now making the rounds on YouTube.

Farmer says Kim has a good sense of humor, adding that it should come in handy in a big bureaucracy like the World Bank.