Accessibility links
'Living, Breathing Archaeology' In The Arizona Desert Every year, thousands of migrants cross the border from Mexico to Arizona, leaving behind artifacts from their journeys. Some of the items end up in trash bags, others in a museum. Still others end up in the morgue. 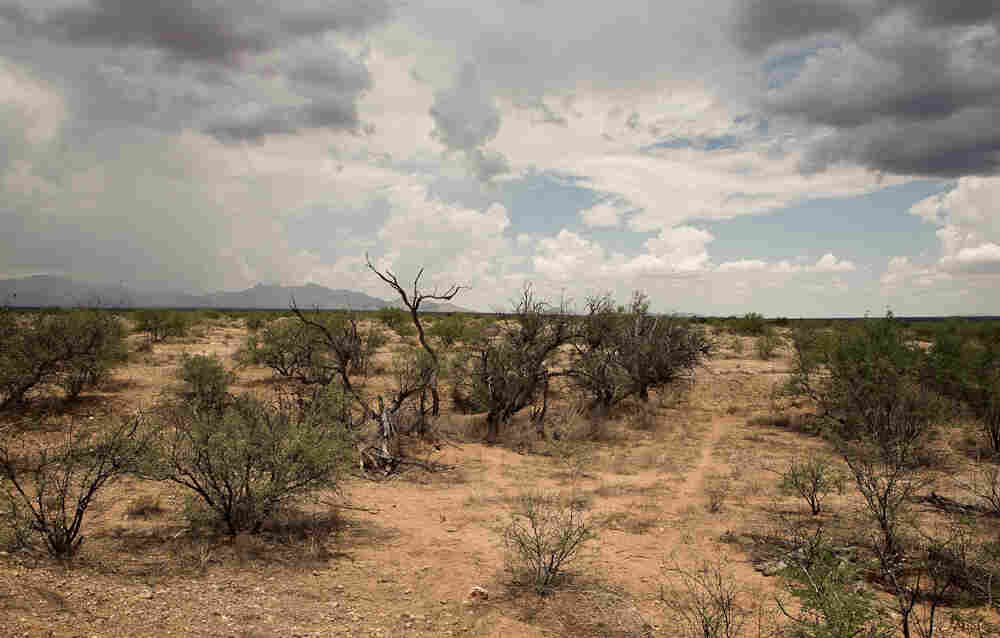 Thousands of people try to cross the desert from Mexico into the United States every year. Michael Wells hide caption 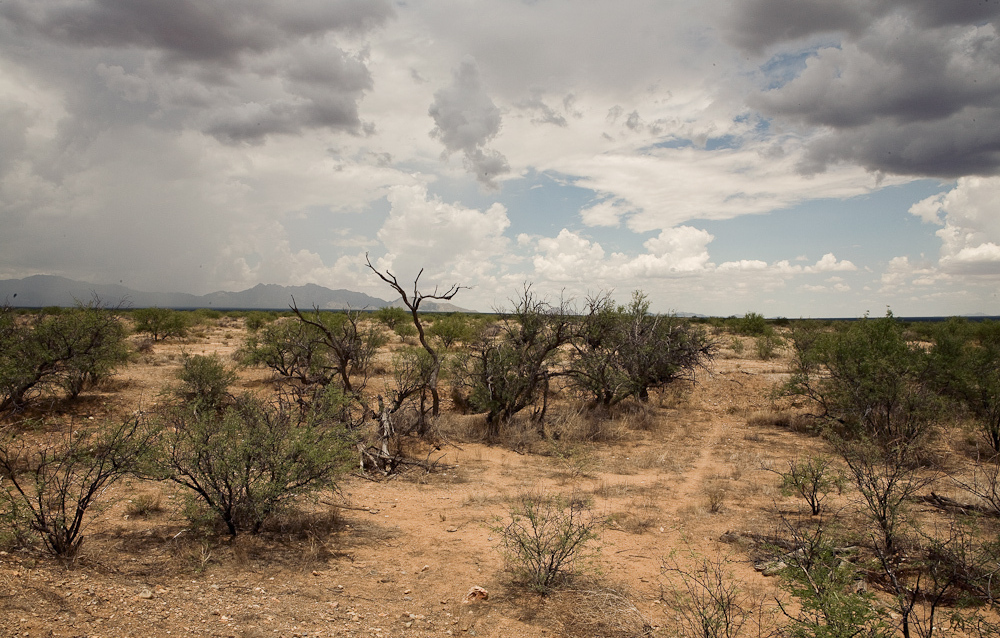 Thousands of people try to cross the desert from Mexico into the United States every year.

If you walk through the desert in southern Arizona you can find evidence of a major migration. Water bottles, shoes, food wrappers — these are some of the things left behind by the thousands of people who try to cross the border between Mexico and the United States every year.

For some people, the items are trash to be cleaned up; for others, they offer a window into a perilous voyage.

In 2008, Jason De Leon began documenting and analyzing what migrants leave in the desert for a research project. An assistant professor of anthropology at the University of Michigan and trained archaeologist, De Leon sees the sun-bleached backpacks as artifacts that tell a larger story. 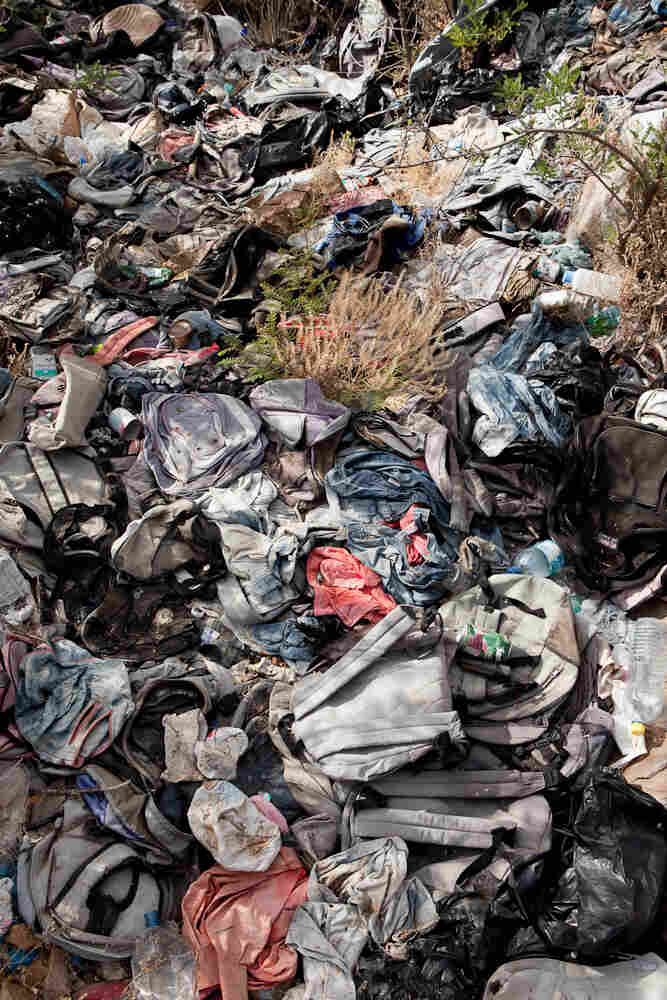 Anthropology professor Jason De Leon says migrants often leave items like backpacks behind in an effort to blend in once they make it to a bigger road or small town. Michael Wells hide caption 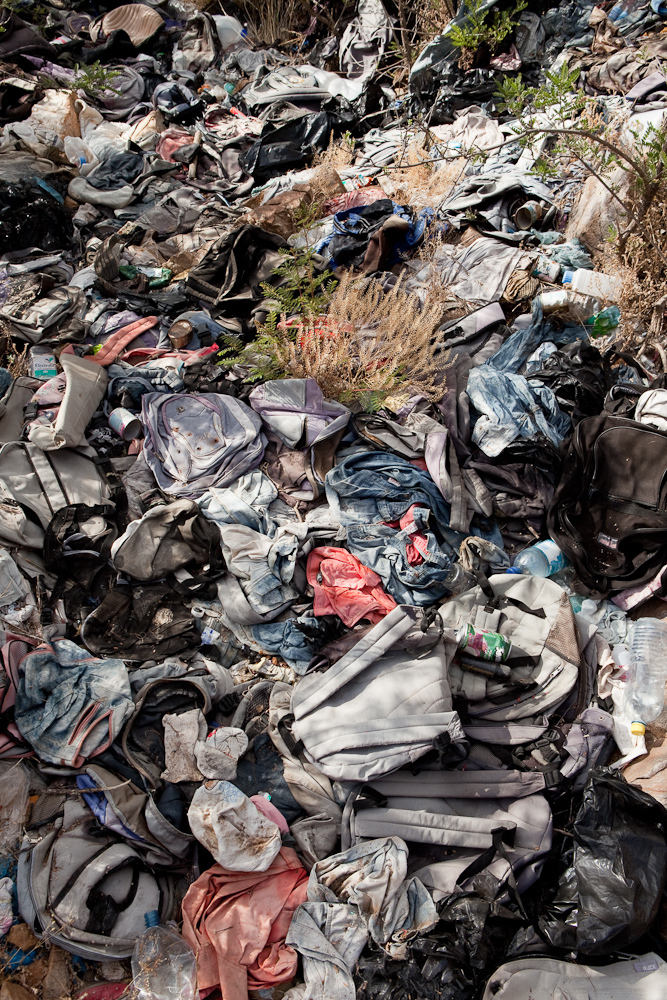 Anthropology professor Jason De Leon says migrants often leave items like backpacks behind in an effort to blend in once they make it to a bigger road or small town.

On a sunny day in February, De Leon parks his car and walks off a road north of Nogales, Ariz., into the cacti. He points out a blue backpack in the distance and a scrap of clothing on the ground. He says these are rest sites for migrants, places used to sleep, eat and change clothes.

"You know a lot of these sites are in the shade because people are trying to rest in the middle of the day and also try[ing] to hide," he says.

De Leon pulls open a zipper on a bag and pulls out matches from Chiapas, Mexico; cortisone cream; and cigarettes.

For him, these scraps are important. This place is important. He says one day it will be seen as sacred ground.

A few miles away there are at least 50 backpacks and as many water bottles scattered among the small trees. A bright green Army bag stands out. De Leon says migrants often leave items behind in an effort to blend in once they make it to a bigger road or small town.

"We've got some backpacks that are full of electrolyte bottles, packets of refried beans. Typically animals will get to that pretty quickly so that tells me it is pretty recent," he says, picking through one of the bags.

De Leon reaches into the front pocket of what looks like a high school student's backpack. He pulls out a roll of toilet paper and a small silver ring.

"This little tiny ring with a half moon and a star," he says, "I don't think this person wanted to leave this behind."

The items range from the sentimental to the ridiculous. De Leon has found a blow-dryer and even high-heeled shoes out here.

"A lot of times people don't know what to expect so they don't know how to pack for it or they want to bring their favorite things," he says, adding that he once found a set of hair curlers with a charger on it.

De Leon doesn't cherry pick what he collects; for him it is all "living, breathing archaeology."

De Leon knows most people don't consider these things sacred. Most people would put socks or T-shirts in a garbage bag long before they'd put them on a shelf in a museum. 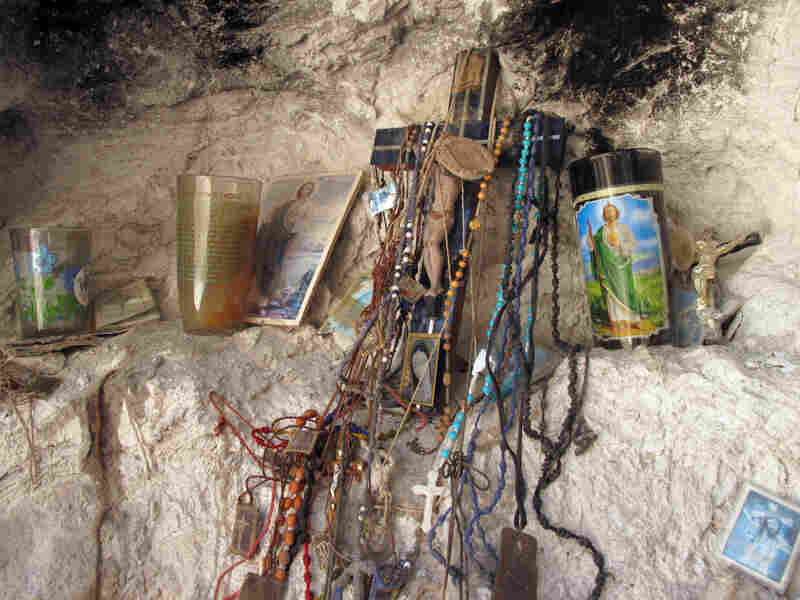 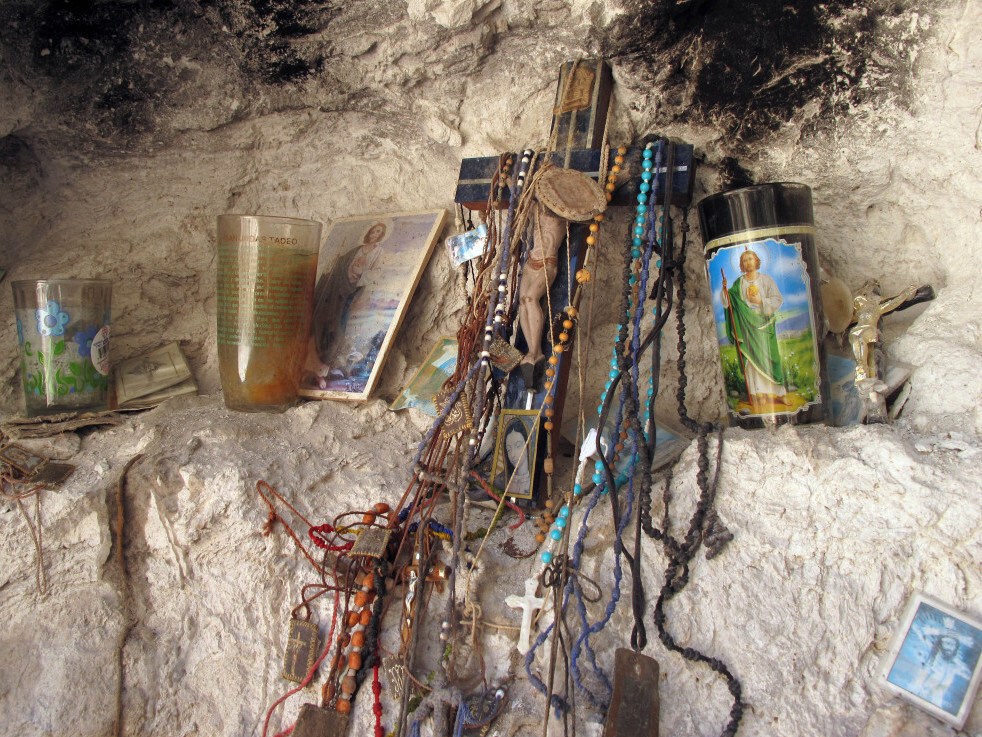 In 2008, De Leon began documenting and analyzing what migrants leave in the desert.

Clean-up of such sites is organized in part by Melissa Hayes, the project manager for the Arizona border trash project with the Arizona Department of Environmental Quality. Hayes says the things migrants leave behind can be hazardous to human health.

"It can affect waterways," she says. "It also can pose a threat for potential wildfires and then also blight the landscape."

On a recent cleanup, Hayes says, volunteers collected around 10,000 pounds of trash north of Nogales. It's estimated half of what they bagged was left by migrants.

"A group will clean it up and you'll see a recurrence of trash in the same area, sometimes in different areas and a lot of the times the areas won't even be accessible easily, which poses a challenge as well," she says.

Most of what volunteers collect is typical trash, but sometimes, among the garbage, there are human remains.

It's a reminder of just how dangerous this trip is. In the '90s, a few dozen border crossing deaths were reported every year. But after 2000, that number jumped to a couple hundred deaths per year, according to the Department of Homeland Security. Tougher border enforcement in states like California pushed migrants east, into rougher and more remote areas.

From The Desert To The Lab

The bodies found in this part of the desert end up at the Office of the Medical Examiner in Tucson.

Gregory Hess, the chief medical examiner, opens the doors to a huge refrigerator with racks and sliding shelves filled with body bags.

"It holds 142 remains, and 2005 was our first big year for migrant deaths, the first year we sort of ran out of space," Hess says.

The office doubled storage and hired a full-time forensic anthropologist to identify human remains. Decomposition happens fast in the desert, and that makes getting remains back to the right families tough.

The forensic anthropologist tries to piece together any bones or artifacts that might help identify the person. Sometimes the office gets lucky and finds a scrap of paper with a number or a name, but mostly it's a few coins or maybe a hair tie.

When the anthropologist can't figure out who the person is, the personal items are coded and stored away and the body is cremated.

Racing Against The Clock

De Leon worries that the evidence of this migration is going to disappear. He says most of it disintegrates in the desert in a few years, which is why he's in a hurry to document what's left.

Back in the desert, he walks toward another bag that's been bleached white on one side by the sun. He stops.

"This is a tiny little shoe. It's a worn-out, sun-dried child's shoe. But you know somebody wore this across the desert," he says. "Someone has walked a long distance, a very small person."

That little shoe likely belongs to one of the estimated half a million migrants who attempted to cross the border here this year.

Some make it into the United States, some are deported. Almost all of them leave something behind.