Accessibility links
Fla. Students 'Making A Stand' For Slain Classmate Trayvon Martin's parents asked his Miami school not to announce his death, but Wednesday, almost a month later, the school held a moment of silence. Two days later, students rallied together, walking out of class with calls for justice, and planning for more acts of solidarity. 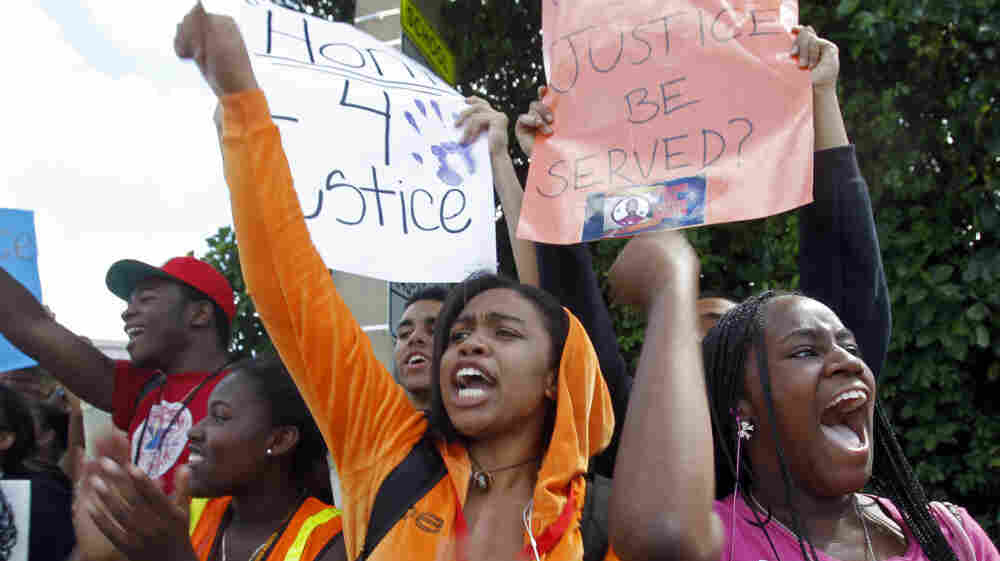 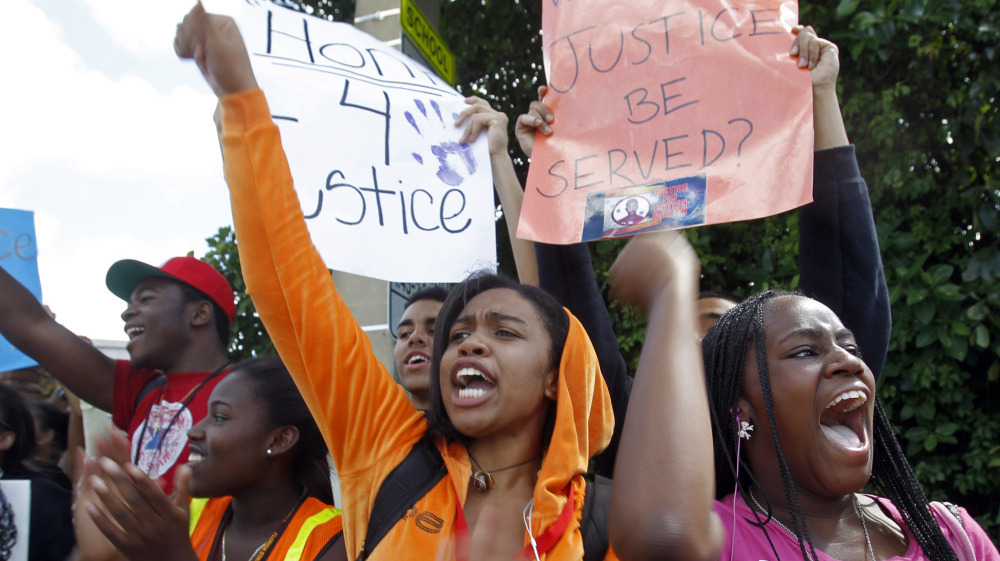 Students walked out of more than 30 Miami schools on Friday, some chanting "Justice for Trayvon," in a sign of solidarity with the 17-year-old black student who was killed by a neighborhood watch volunteer last month in Sanford, Fla.

Protesters numbered more than 1,000 at some schools, others fewer than 100. Some teachers and principals gave their tacit approval.

The first walkout was at Carol City High School, where Trayvon Martin was a student last year. Hundreds of his old schoolmates walked out in the middle of the school day.

Nearly a month has passed since George Zimmerman shot and killed Trayvon, who was unarmed. But it wasn't until this week that Trayvon's high school said anything about his death to his fellow students.

That got Miami students talking and organizing.

Alana Coreus, a 12th-grader, says she won't mind if she gets punished for walking out of class.

"Everyone feels like what they're doing is right," she says, "because everyone is walking around with their Skittles, their hoodies, and they feel like they're making a stand."

At the time of his death, Trayvon was carrying a bag of Skittles and wore the hood of his jacket over his head.

Miami-Dade County Public Schools superintendent Alberto Carvalho says each school will have to decide for itself whether to discipline students.

"I think we have demonstrated passion and compassion, understanding," he says. "We don't decree discipline from downtown."

"Walking out is not really doing anything, it's not going to bring him back, not making his mom feel any way because she asked us not to walk out," he says, "and what we're doing, it could kind of comfort her."

Students at the school are writing letters to Trayvon and his family, creating what they call a "chain of life" around the school campus.

According to the school district, Trayvon's death was not initially announced to his classmates because his parents asked for privacy. Internal school emails show the principal asked teachers to refrain from lengthy conversations about Trayvon.

Ashley Aristide says her teacher avoided the subject when it came up in history class.

"I am pretty sure the school just really doesn't want to have that much commotion in the school because then learning in that environment would be pretty hard," she says.

Eventually, the school decided to do something. The principal called for a moment of silence more than three weeks after Trayvon's death.

Frustrated by the delay, some students took to social media and began organizing the walkouts.

Their online activism continues. On Monday, Trayvon's former classmates are planning to dress in black to mark the month that has passed since his death.

This story is part of the StateImpact Florida project. StateImpact is a collaboration between NPR and member stations examining the effect of state policy on people's lives.