Accessibility links
Unlikely Advocates For Teen Killers: Victims' Families As the Supreme Court heard arguments this week on sentencing juveniles, more than a dozen families of teenagers sentenced to life without parole came to Washington to advocate hand-in-hand with the families of the people their children murdered.

The Supreme Court heard arguments this week about the fate of 2,500 offenders who were sentenced as teenagers to life in prison without the possibility of parole. Seventy-nine of them were 13 or 14 when they committed their crimes.

Many prosecutors and family members of victims spoke out about the need to keep the sentences in place.

One man's mother had been killed by four teenage girls. Another man's son was killed by a teenage boy. Yet all of them want the court to find life without parole for juveniles unconstitutional.

It's not a group you often hear about. Many in the room said they frequently are unwilling to share their feelings about the issue because they have been accused of not missing their loved ones enough. On this day, there was enough sorrow in the room to fill an afternoon — but also enough forgiveness. 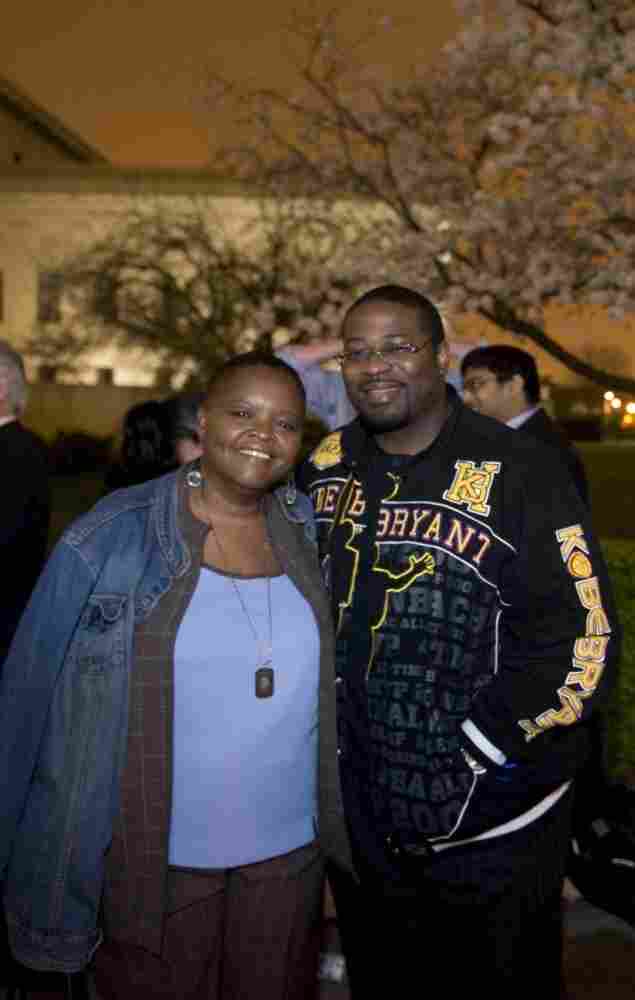 Mary Johnson and Oshea Israel wait outside the Supreme Court for Tuesday's hearing on whether it is unconstitutional to sentence teenagers to life in prison without the possibility of parole. When he was 16, Israel shot and killed Johnson's son. Campaign for the Fair Sentencing of Youth hide caption

toggle caption
Campaign for the Fair Sentencing of Youth 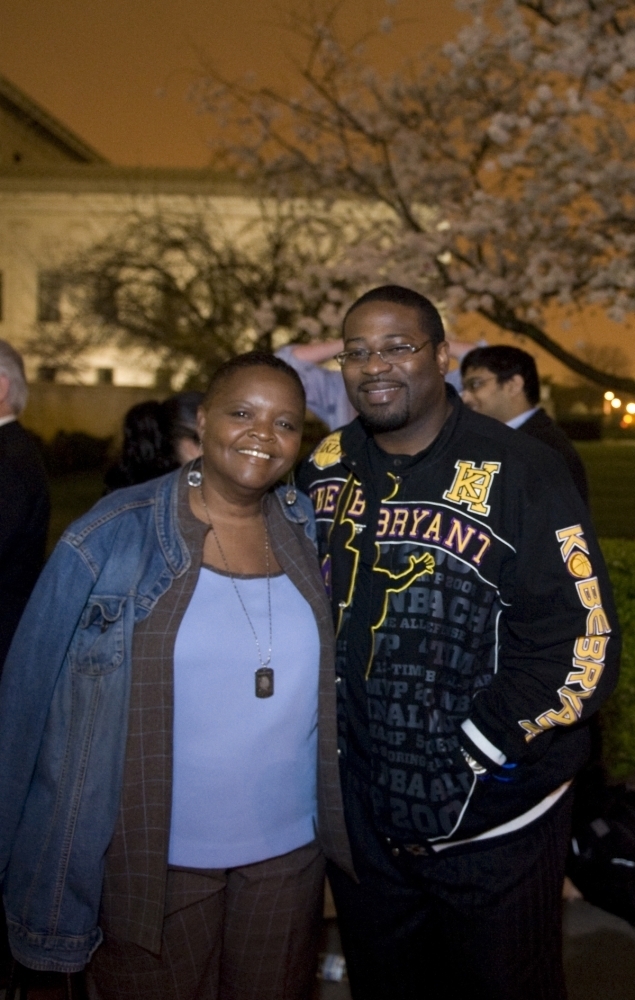 Mary Johnson and Oshea Israel wait outside the Supreme Court for Tuesday's hearing on whether it is unconstitutional to sentence teenagers to life in prison without the possibility of parole. When he was 16, Israel shot and killed Johnson's son.

Campaign for the Fair Sentencing of Youth

'He Was An Animal'

Mary Johnson said it took her more than a decade to get here. She was at work in Minnesota 19 years ago when her sister-in-law called and told her her 20-year-old son Laramiun had been shot and killed at a party.

"He was an animal," Johnson says. "I wanted him charged as an adult with first-degree murder, imprisoned for the rest of his life. I mean I hated Oshea."

Sitting off to the side of the group, Johnson smiles and looks directly across the table — at Oshea Israel.

Asked if he killed Laramiun, Israel says quietly: "Yes, I did. Yes, I did. I was 16. He was 20. Neither one of us wanted to back down. And me being foolish enough to think that I held the most power just because I had a gun. He and I could have been best friends had we just taken the time to communicate."

The families came together at the behest of the Campaign for the Fair Sentencing of Youth, a nonprofit that seeks to bring families and sometimes even perpetrators to the same table.

But how Oshea Israel and Mary Johnson ended up sitting here is mostly a testament to Johnson.

Israel was initially facing life in prison without parole, but the judge lessened the charge and sentenced him to 25 years, most of which he served. He got a few years off for good behavior. It was a long time since that night at the party. He says as a 16 year old, none of it really registered.

"All I could do was shut down and numb myself to it," Israel says. "It wasn't until years later that I started to make that connection, like — Wow, I really did do this. I was responsible for someone losing their life."

For a decade, Johnson struggled with grief. Then one day, she read a passage in a book about two mothers who had lost sons.

The mothers were angels. One of them said she would have taken her child's place on the cross if she could have.

Johnson began to wonder if she could meet Israel's mother, but she knew in order to do that, she had to meet him.

Early one morning in 2005, Johnson showed up at the Minnesota State Correctional Center in Stillwater.

Israel says he was ready if Johnson wanted to yell at him or even hit him. But what she said instead surprised him.

"I was like, 'You don't know me. You didn't know my son. My son didn't know you. We need to lay our foundation. We need to get to know one another,'" Johnson says. "And that's what we did."

They talked for two hours. Johnson had planned to visit Israel only once, but a moment at the end of the meeting seemed to bind them together: Israel asked Johnson if he could hug her.

"I felt like she just offered me her forgiveness," he says. "I had nothing else to offer her; at least I can show her some compassion."

They met in the middle and embraced.

"I tell you I had something going on in my feet physically, moving and stirring in my feet, and it just moved up and up," Johnson says. "I felt this whatever leave me. I knew that all that hatred and animosity and anger and the bitterness ... I had inside for 12 years was over."

Theirs is not a surprising story in this cafeteria. Each of a dozen tables held families of perpetrators and families of victims. 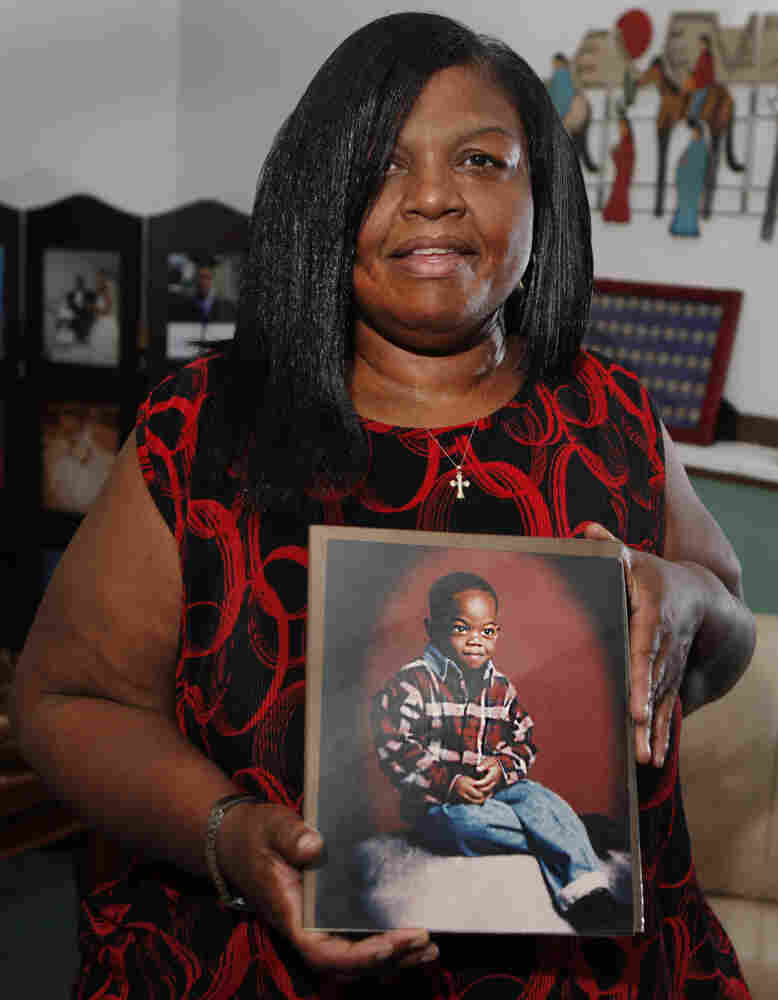 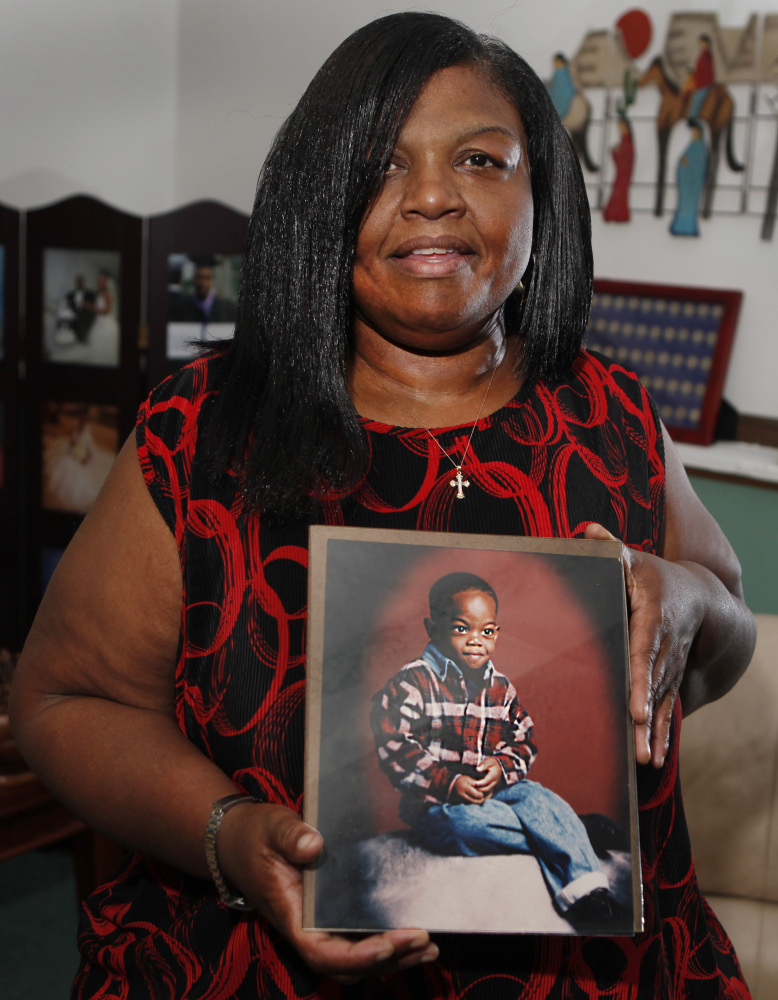 Sharletta Evans holds a photograph of her 3-year-old son Casson in Aurora, Colo., last July. Casson was killed in a drive-by shooting by two 15-year-olds.

At one table, Sharletta Evans tells the group that 17 years ago, her 3-year-old son was killed in a drive-by shooting by two 15-year-olds.

"Casson Xavier Evans, that was my son's name," she says. "His nickname was Biscuit."

Across from her, Mona Schlautman nods her head. Her son was killed by an adult and a teenage accomplice.

"I knew he did not get a fair trial, but I didn't care at that time," Schlautman says. "I was just glad that he had been caught and locked up."

It takes a minute before Esa Mathis speaks up. Her son Ralph is serving life without parole for drug racketeering.

"My son, the seeds of wrong decisions were sewn a long time before those decisions were made," she says. "By the time my son was 15 years old, not only did he not have a father, but I had been married and divorced three times because of my own brokenness and not knowing how messed up I was. I had to own a part of that, you know?"

Everyone in the room wanted the teens to pay a price for their crimes, but for every story of trauma the victims' families shared, the teens' families seemed to describe an equal number of stories of trauma.

For many years Evans didn't care that the 15-year-olds who killed her son had hard lives, but that changed when she ran into the grandmother of one of the boys at a food bank where they were both volunteering. Evans says she realized either one could have been the other.

"Taking a look at my surviving son, who was 15, what if that was him?" she says. "If ... he took a life, would I want to see him spend the rest of his life in prison? And the answer was no."

Many say people don't understand that they're not trying to let the teens off the hook. What they want is for the teens to have a chance to one day make amends; getting to that place has brought them peace.

"The fact that my son died in my own arms and covered me with his own blood," Evans says, "I suffered. It wasn't nothing to take lightly the fact that he was only 3. He never made it to kindergarten. That only makes it harder. So no one can judge how much I've suffered."

In the next few months, the Supreme Court will rule whether life without parole can be given to teenagers. Experts have argued that teenagers' brains are less developed — they are more impulsive and less able to weigh the consequences of their actions. But prosecutors say the sentence is an important tool.

"Thirty-nine states passed laws to provide that in the rarest of cases, life without parole for a juvenile can be a possibility," says Scott Burns, head of the National District Attorneys Association. Burns wrote a brief to the court arguing the sentence should not be overturned.

"If they were repealing all these laws, that would show ... a consensus the other way," he says, "but that's not happening in America."

Asked if he thinks a teenager's ability to change and express remorse is worth something to society, he said: "Well, that's the debate, isn't it? Is it the goal to rehabilitate someone to see if they change? Or is the goal to do justice for the victims and others?"

But for Mary Johnson, rehabilitation is retribution. She says she knows this because she sees it every day; not long after Israel was released from prison, he rented the apartment next door.

But Israel says he doesn't mind. "I really know she's in my business out of care and concern, like she really wants to make sure I [am] the best person I can," he says. "She doesn't want to see me suffer. Just knowing that I caused her pain and she is the person who protects me from it, it's like — wow."

Every day Israel checks in on Johnson. They spend their weekends together.

Johnson looks across the table at a man, no longer a child, who two decades ago killed her 20-year-old boy. To me, she says, Israel is like a son.