Accessibility links
In Contentious System, Hope For A Russian Orphan Artyom Savelyev's adoptive mother in Tennessee put him on a plane two years ago and sent him back to his homeland, unaccompanied. Now, he's living with a foster mother near Moscow. The 9-year-old's journey highlights the challenges both within Russia and between Russia and the U.S. over how to care for orphans. 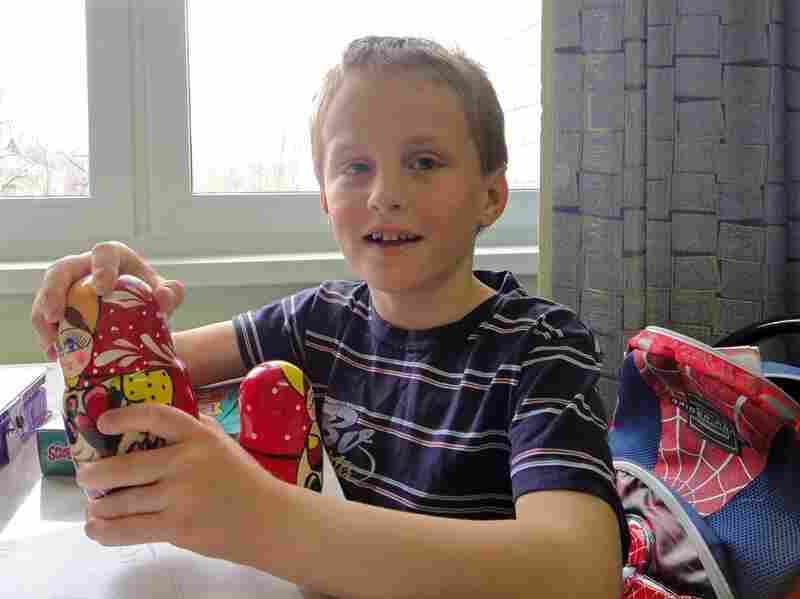 Artyom Savelyev, now 9, plays with a Matryoshka doll in a children's hospital in Moscow in 2010. The American woman who adopted him sent him back to Russia two years ago. EPA /Landov hide caption 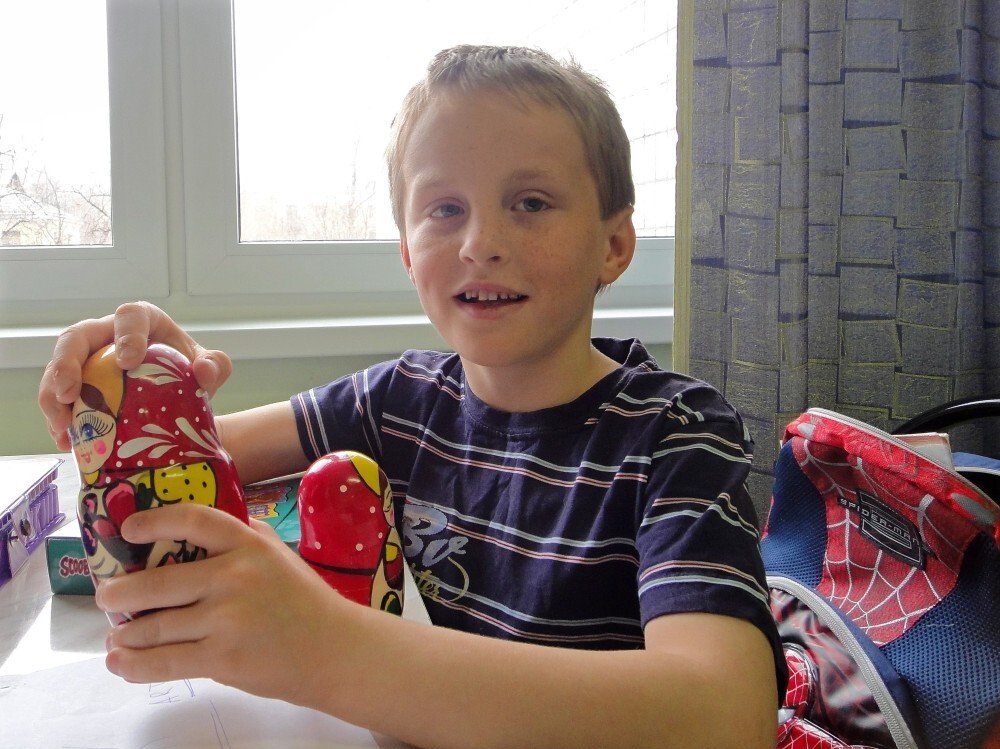 Artyom Savelyev, now 9, plays with a Matryoshka doll in a children's hospital in Moscow in 2010. The American woman who adopted him sent him back to Russia two years ago.

The Russian boy sent back to his homeland by his adoptive U.S. mother two years ago might have finally gotten a break.

Torry Ann Hansen put Artyom Savelyev on a plane with a note saying he had "severe psychopathic issues" and she didn't want to be his parent any more. A Shelbyville, Tenn., court ordered her to pay child support this month.

Artyom's journey highlights the challenges both within Russia and between Russia and the United States over how to care for orphans.

Now 9, Artyom is now living at the SOS Children's Village in Tomilino, Russia. His home is one of a dozen brick houses set in a stand of birch and pine trees on the edge of Moscow. There are six SOS Children's Villages in Russia, each with about 60 children, built on a model developed in post-war Austria.

The aim is to raise orphans and abandoned children in family settings, in individual houses with mothers, or mothers and fathers, and siblings. 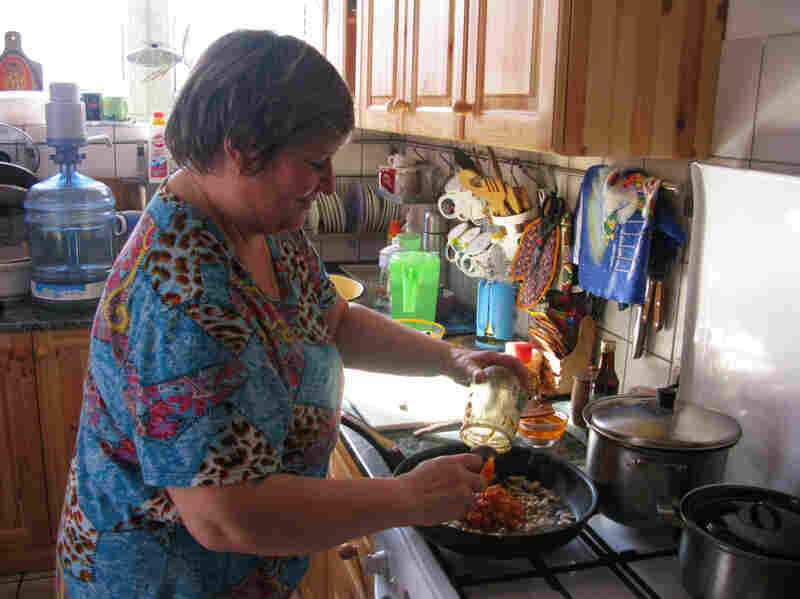 Vera Yegorova answered a classified ad for "mother" in 1995. She has taken care of 17 children over the years, including Artyom, at the SOS Children's Village in Tomilino, Russia. Sergei Sotnikov/NPR hide caption 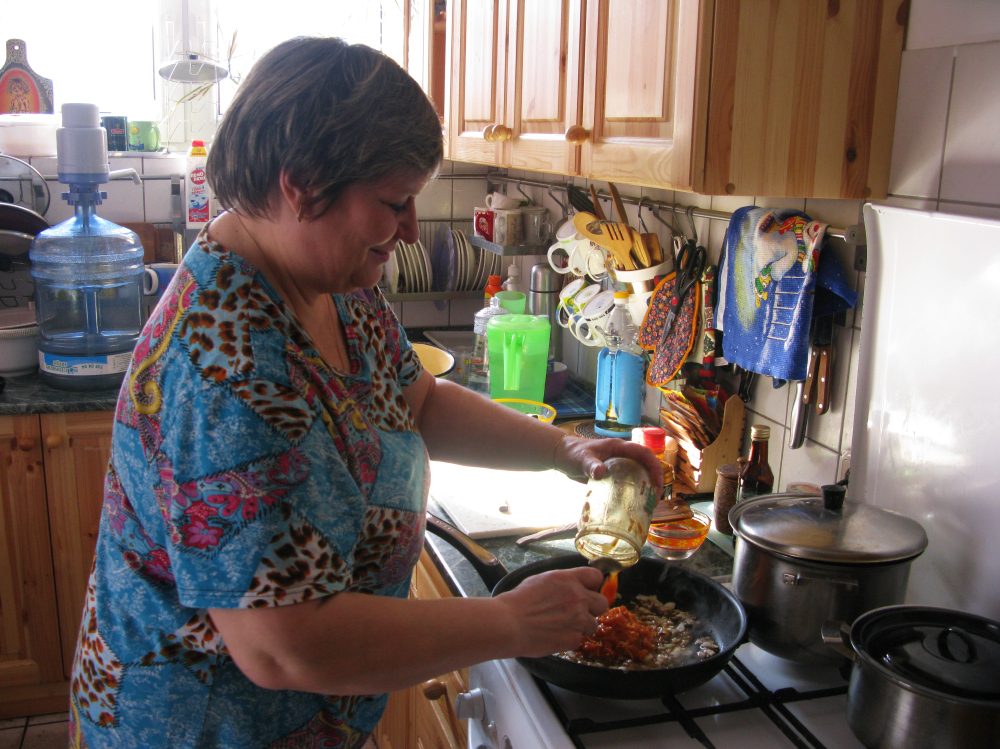 Vera Yegorova answered a classified ad for "mother" in 1995. She has taken care of 17 children over the years, including Artyom, at the SOS Children's Village in Tomilino, Russia.

"We send the kids to regular schools, to the local day care center," says director Anatoly Vasilyev. "We do this so that the children get more socialized, so that they're not locked up in one organization."

Artyom lives with five brothers and sisters, also orphans or children who've been taken from parents deemed unfit. Vasilyev said he would not let NPR see Artyom because the boy had been upset by the TV cameras and publicity accompanying his return to Russia. Vasilyev introduced us to the woman Artyom now calls "mama," and she invited us into her home.

Vera Yegorova, 53, recalls the day back in 1995 when she picked up a newspaper on her way to work as a systems analyst in Moscow. She noticed a classified ad that read: "Profession: Mother. If you love children, if you want to devote your life to children, fill out this form and send it in."

Divorced and childless, she yearned for a family. Yegorova's grandmother had 10 children; she was honored with the title "Hero Mother" of the Soviet Union. Yegorova seems like the real hero, having taken in 17 children over the years.

She rattles off snippets of her conversations with the children and shares tidbits of domestic life — what they like to eat, the chores they like to do, how Artyom finally warmed up to a neighbor who came over to play.

Yegorova says she sends the children off to school with a kiss in the morning. In the afternoon, she tutors them.

"Without the teacher's help, without my help, they can't do their lessons. We're working on multiplications tables with Artyom now," she says. "It's hard for him."

But he is settling in, she says. She describes Artyom as an affectionate child who helps her in the kitchen and gets along with the other children. When he arrived four months ago, she says, he refused to leave the house and was anxious.

"At first, he couldn't settle down and go to sleep. I had to sit with him for a long time," she says. "He's calming down now."

Artyom had spent more than a year at an orphanage in Moscow before being placed at Tomilino.

He says many of his charges were taken away from alcoholic mothers who neglected their children. Forfeiture of parental rights is still common in Russia. Like Artyom, others at Tomilino have been given up by families who took them in. A staff psychologist refers 30 to 40 percent of the kids to specialists, Vasilyev says. The caretakers attend classes in child psychology and get special help when necessary.

Artyom's return to Moscow two years ago touched off an international scandal. In Russia, it was the last straw after a series of adoptions in America that went horribly wrong, including the deaths of several adopted Russian children. 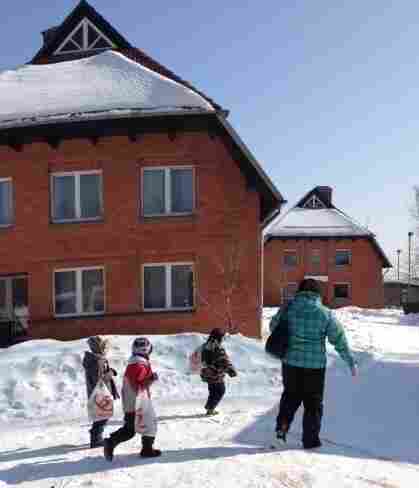 The SOS Children's Village in Tomilino is one of six such complexes in Russia. Each location houses about 60 orphaned or abandoned children. Martha Wexler/NPR hide caption

Russian Foreign Minister Sergei Lavrov announced a freeze on adoptions to America until the two countries signed a bilateral agreement. In fact, the flow of children never stopped, although it did slow down to 962 last year. The U.S. State Department says in the last six months, about 450 Russian children have been adopted and immigrated to the United States.

The U.S. and Russia, meanwhile, negotiated and signed a bilateral agreement on July 13, 2011. It requires that adoptions be processed by agencies accredited by the Russian government. It provides for checks on the children once they are in the United States. Russian institutions must also give more complete information on the medical and social needs of the children.

"It will make for a better adoption," says Susan Jacobs, the State Department's special adviser for children's issues. "The parents will know more about the child and will be able to make a better decision about whether they can meet those needs."

The agreement must still be ratified by the Russian parliament, or Duma. Russia's children's ombudsman, Pavel Astakhov, says that will happen in the current spring session. Ambassador Jacobs cites anecdotal evidence of American families being told Russia won't approve any new adoptions until ratification. She says, however, the Russians are telling the State Department there is no moratorium.

In the last two decades, more than 60,000 Russian children have been adopted into American homes. More than 100,000, however, live in orphanages, in dormitory-like settings closed down long ago in Western countries. Most of the children are so-called "social orphans," with at least one parent still living.

"I consider it shameful that we have so many children in these institutions," Astakhov, the ombudsman, recently told the Duma. "Most of them are not in good condition either, as far as the physical premises or the moral-psychological climate is concerned."

In 2006, then-President Vladimir Putin issued an order to move children out of institutions. Russia had been working to improve foster care, according Boris Altshuler, an advocate who heads a nongovernmental organization called Right of the Child.

But Altshuler notes than in 2008, the Duma passed a law that put a stop to efforts to expand foster care in Russia's regions — a seeming contradiction of Putin's order. Altshuler sees a corrupt motive.

"Behind this great orphanage system of Russia," he says, "there is enormous money — several billion dollars a year."

Without orphans, he says, "children's institutions will not receive this money."

Altshuler also points the finger at the nationalist rhetoric. It's embarrassing for a nation to be sending so many of its children overseas. And while there's been talk for years about encouraging domestic adoptions, Altshuler says, Russian citizens who want to adopt run up against demands for bribes in what he describes as the "three circles of hell" for Russians adopters.

The international cases of abuse or apparent abandonment, like Artyom's, have only fueled what he calls the "patriotic nationalist struggle" against foreign adoption.

"This means that thousands of Russian children or babies who earlier were adopted abroad," Altshuler says, "stayed in Russian orphanages, with all their bad consequences [for children's emotional health]."