Accessibility links
Pipe Down! That Noise Might Affect Your Plants Aside from urban legends about talking to your flower pots, is there any reason to study the effect of noise on plants? One ecologist says yes — because noise pollution can disrupt the behavior of birds and other animals that plants rely on. 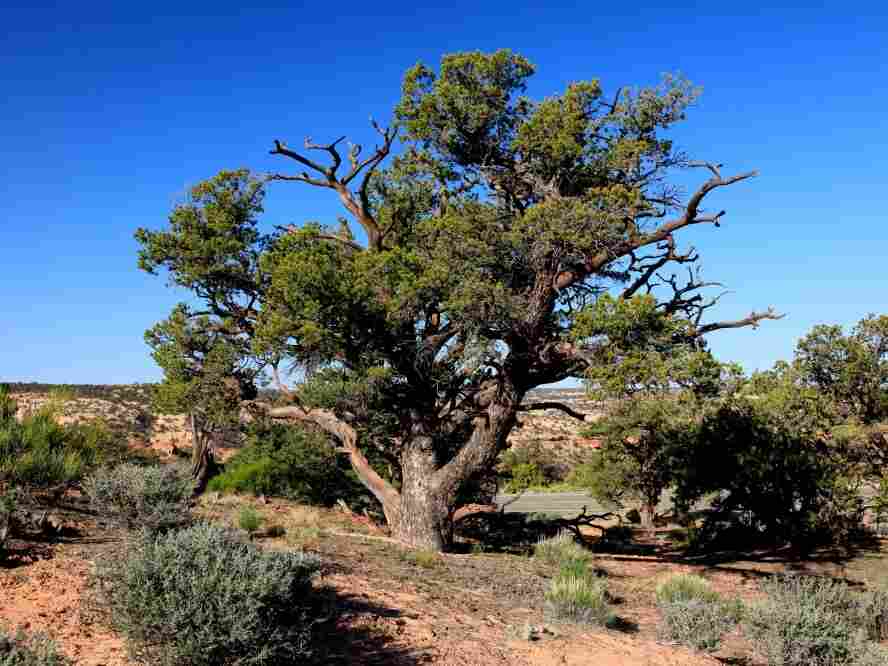 Researchers haven't given much thought to the effect of noise and noise pollution on plants. After all, plants don't have ears — at least, not the kind you hear with — so there doesn't seem to be much point. But thanks to ecologist Clinton Francis, that could be about to change.

Francis is a postdoctoral researcher at the National Evolutionary Synthesis Center in North Carolina. But he has spent the past few years in northwestern New Mexico, studying noise pollution in Rattlesnake Canyon.

Gnarled juniper trees and pinon pines dominate the canyon's landscape of high mesas and rough sandstone cliffs. Tucked in among the trees are thousands of natural gas wells, about a third of them pressurized by ear-splitting compressors.

"They run 24 hours a day, 365 days a year, with the exception of periodic maintenance," Francis says, "so they are going all the time."

Since 2005, he has been studying how Rattlesnake Canyon's birds respond to the compressors' nonstop racket. And it looks like the noise is having an effect. 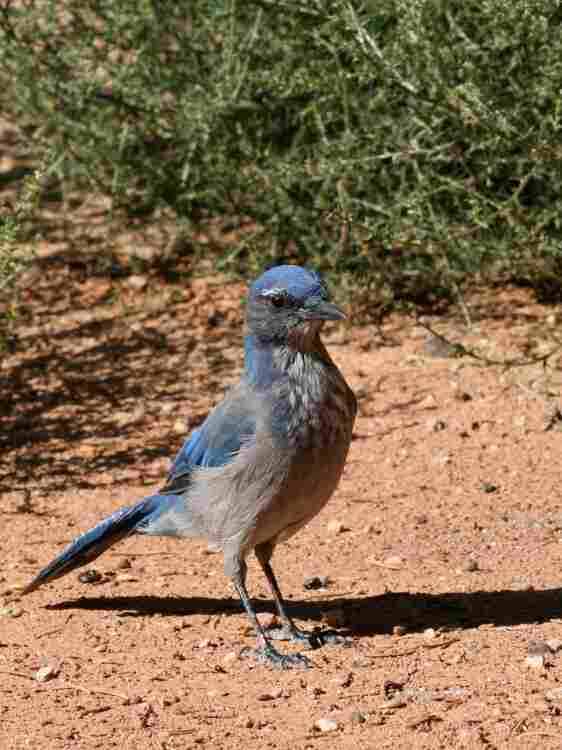 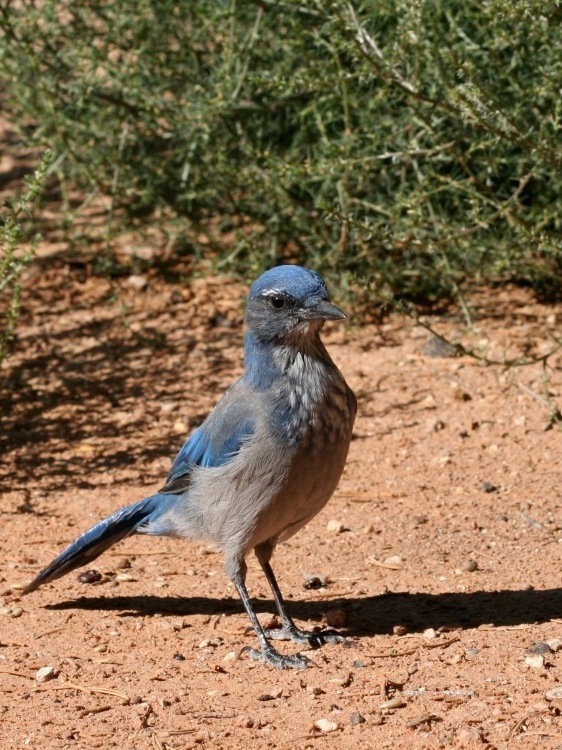 Western scrub jays are important dispersers of pinon pine seeds. A single individual may hide thousands of seeds in scattered caches in the ground.

"Black-chinned hummingbirds, for example, tend to prefer and settle in really noisy landscapes, and Western scrub jays tend to avoid these noisy areas," he says.

If the noise is changing the way the birds behave, Francis wondered, it might have an effect on plants in the area, too. Take, for example, the relationship between pinon trees and scrub jays.

"We know that jays are really important seed dispersers for pinon pine," Francis says. The jays bury the seeds to snack on later, but inevitably, some get forgotten and grow into new pine trees.

Francis already knew there were fewer pine seedlings at noisy sites. Was that because the noise was keeping the jays away from their pine nuts?

To find out, Francis set up motion-trigger cameras at both noisy and quiet sites, put out some seeds and waited.

As he predicted, the jays were only stashing nuts at quiet sites, not at noisy ones. But in a twist, the seeds at noisy sites were being gobbled up anyway – by mice. And the mice weren't leaving any seeds behind to sprout.

It looked like the compressor noise was hitting the pine trees with a double whammy. "We're just not getting as many seeds going into the seed bank in noisy areas, and the ones that do might be consumed by the mice," Francis says. 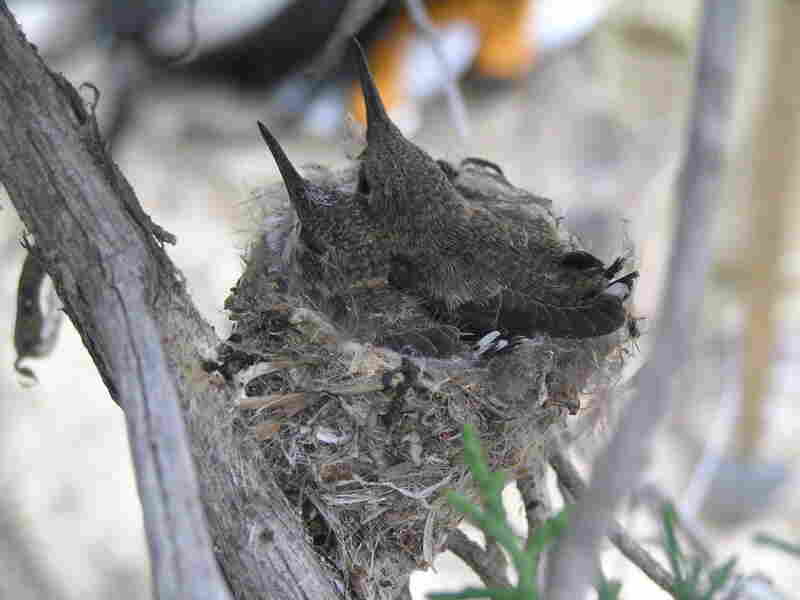 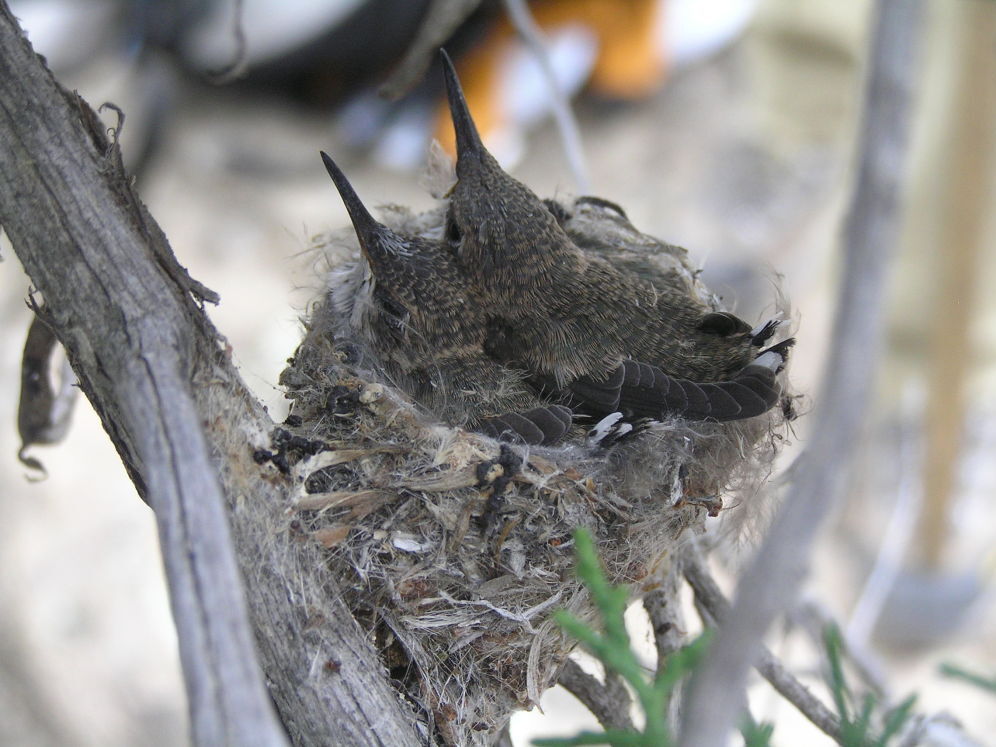 Black-chinned hummingbirds are drawn to noisy sites near natural gas well compressors, possibly to avoid Western scrub jays, which prey on their eggs and chicks.

But he also says the effect of noise on the canyon's plants isn't all bad. A flower pollinated by hummingbirds did better near the compressors. Remember, hummingbirds seem to like the noise — probably, Francis says, because it drives away the scrub jays that would otherwise eat the hummingbirds' eggs and young.

Francis just published his research in the British journal Proceedings of the Royal Society B. And other researchers are already taking note.

Ecologist Gail Patricelli, of the University of California, also studies how gas-drilling noise affects birds — in her case, the greater sage grouse. She says as far as she knows, Francis' work is the first to show how noise affects plants.

"You kind of hit yourself on the forehead and think, why didn't I think of that?" Patricelli says. And even at her remote field site in Wyoming, she says, it's not quiet.

"We hear airplanes, we hear roads going, you know, way off in the distance that are too far away to see, and yet you can still hear them, because sound travels much, much further than a lot of the other types of disturbance," Patricelli says. "And so it's just an enormous land area that's impacted by noise, and we know remarkably little about what that noise does to the ecosystem."

But it seems likely that for long-lived species like the pinon pines in Rattlesnake Canyon, the effects of noise may continue to reverberate long after the compressors have gone silent.