Accessibility links
Obama Asks China To Help Halt N. Korean Rocket The U.S. recently agreed to provide North Korea with food assistance, and it was hoped that this would help calm tensions in the region. But under its new leader, North Korea is now planning a rocket launch next month that's making everyone uneasy. 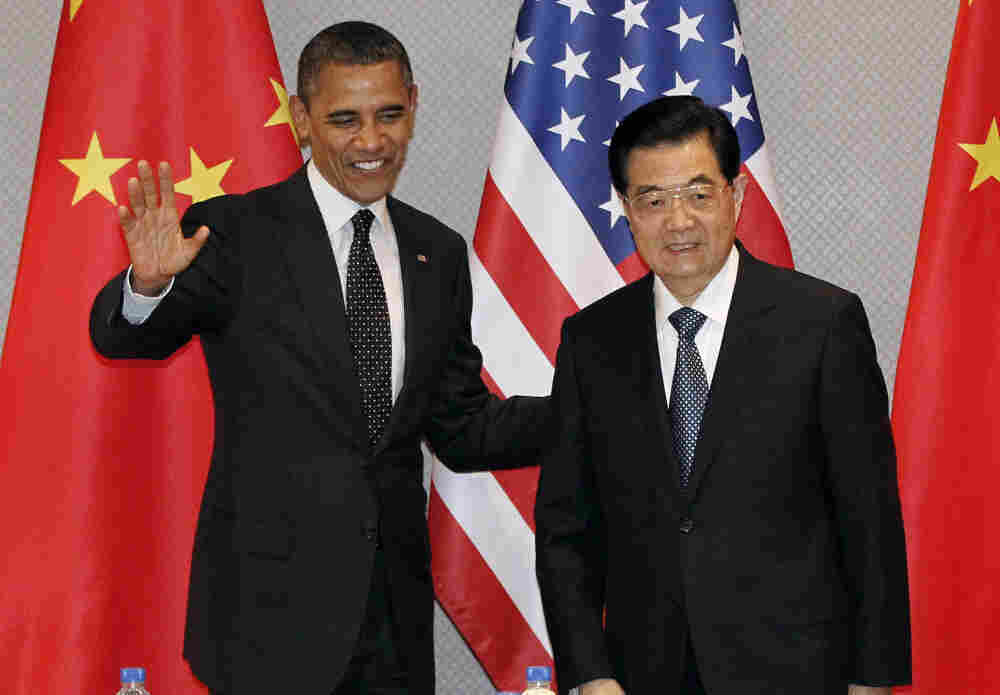 President Obama greets Chinese President Hu Jintao at the start of their meeting in Seoul, South Korea, on Monday. The U.S. president asked the Chinese leader to use his influence with North Korean to discourage that country from launching a rocket next month. Pablo Martinez Monsivais/AP hide caption 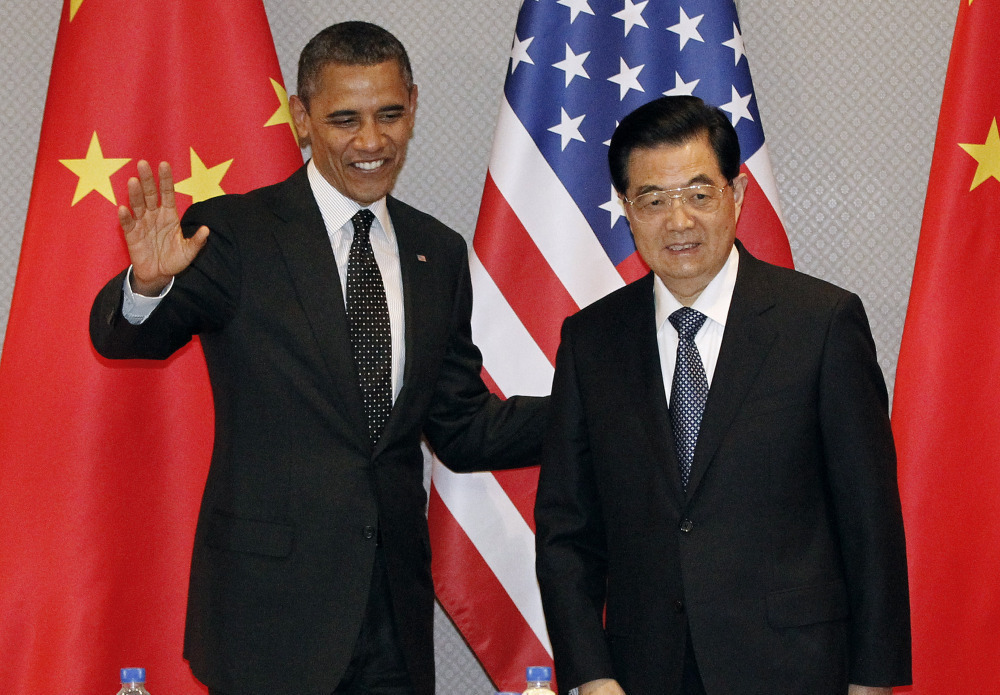 President Obama greets Chinese President Hu Jintao at the start of their meeting in Seoul, South Korea, on Monday. The U.S. president asked the Chinese leader to use his influence with North Korean to discourage that country from launching a rocket next month.

President Obama came to South Korea to talk about global nuclear security with world leaders, but found himself trying to build a unified front against North Korea's planned rocket launch next month.

Obama and South Korean President Lee Myung-bak strenuously warned North Korea not to go ahead with the launch. In a speech Monday at the summit in Seoul, Obama used some of the toughest language he has ever used addressed to the leaders of North Korea.

"And know this: There will be no rewards for provocations," Obama said. "Those days are over. To the leaders of Pyongyang I say, this is the choice before you. This is the decision that you must make. Today we say Pyongyang, have the courage to pursue peace and give a better life to the people of North Korea."

Meanwhile, Obama met privately with China's president, Hu Jintao, and asked him to use China's influence to change North Korea's behavior. Hu did criticize the launch plan, saying it would be good to abandon it. He told Obama he is taking the situation very seriously.

Earlier, Obama publicly expressed some frustration with the Chinese.

And know this: There will be no rewards for provocations. Those days are over. To the leaders of Pyongyang I say, this is the choice before you.

"What I've said to them consistently is, rewarding bad behavior, turning a blind eye to deliberate provocations, trying to paper over these not just provocative words but extraordinarily provocative acts that violate international norms, that that's not obviously working," Obama said.

North Korea has announced it will launch a long-range rocket in April to put a satellite in orbit. Such a launch would violate a U.N. Security Council resolution as well as commitments North Korea made recently to the U.S.

North Korea's leader, Kim Jong Un, who is in his late 20s, has been in power for only a few months, after succeeding his father, Kim Jong Il, who died Dec. 17. The new leader has given few indications so far of what his policies will be, and the planned rocket launch could provide a glimpse into how he handles a sensitive issue that will be closely scrutinized by the wider world.

During his visit to Seoul, Obama has spoken frequently about the bad behavior of North Korea's leaders.

In the most recent example, North Korea and the United States announced what amounted to a freeze-for-food deal. North Korea agreed to freeze its uranium enrichment and missile tests.

In exchange, the U.S. pledged to provide a substantial amount of food aid. But soon after, North Korea announced its plan to launch the satellite-bearing rocket.

Trying To Break A Pattern

In the past, Obama said, that sort of brinkmanship would lead to North Korean gains in its negotiations with the U.S. and with South Korea. But now, the president says, he's not willing to play that game.

There had been a pattern, I think for decades, in which North Korea thought that if they acted provocatively, then somehow they would be bribed into ceasing and desisting acting provocatively.

"There had been a pattern, I think for decades, in which North Korea thought that if they acted provocatively, then somehow they would be bribed into ceasing and desisting acting provocatively," Obama said. "And [South Korea's] President Lee and I have agreed from the start of our relationship that we're going to break that pattern."

The North Korean problem has somewhat overshadowed the Seoul summit — the goal of which is to take stock of the improvements in safeguarding dangerous nuclear materials around the globe. This is an issue that the president has focused a good deal of attention on since he took office.

"If countries either historically, because of old nuclear programs, or currently, in terms of how they operate their nuclear energy facilities, are leaving a bunch of material out there that could potentially fall in the hands of terrorists, that poses an extraordinary threat to the United States, to South Korea and to countries all around the world," Obama said.

The president also said he believes the U.S. can make deeper cuts in its nuclear arsenal and still provide protection for itself and its allies. He did not say how deep the cuts could go.