Accessibility links
Tax Fight A Prelude To Supreme Court Fireworks The first of the three days of arguments over the new health care law proved, as expected, to be arcane, dense and probably unimportant in the long run. Tuesday's argument challenging the constitutionality of the individual mandate is likely to provide more sparks. 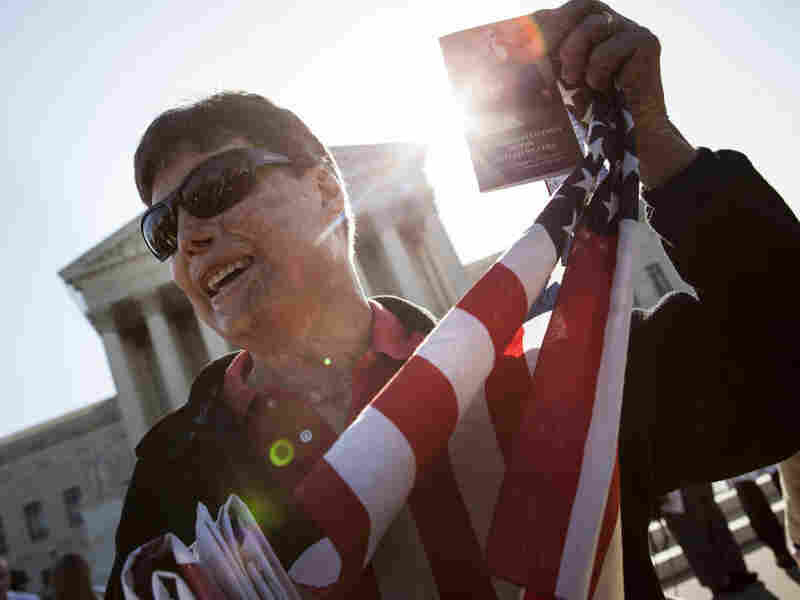 A protester holds up a copy of the U.S. Constitution outside the Supreme Court on Monday in Washington, D.C. Brendan Smialowski/AFP/Getty Images hide caption 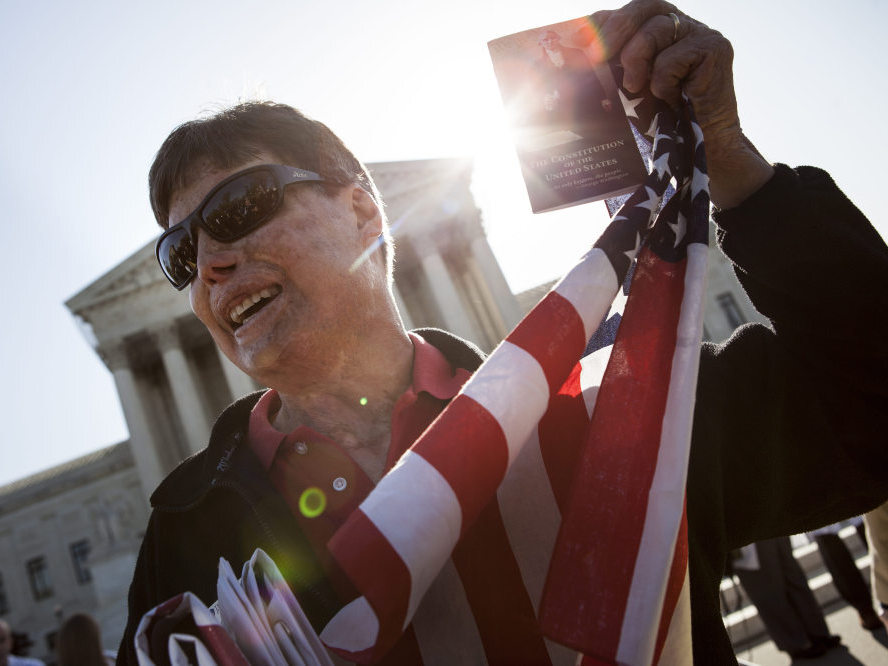 A protester holds up a copy of the U.S. Constitution outside the Supreme Court on Monday in Washington, D.C.

The U.S. Supreme Court signaled Monday that it likely will resolve the constitutional challenge to the Obama health care overhaul, sidestepping the procedural issues that could derail the case until 2015.

The first of the three days of arguments proved, as expected, to be arcane, dense and probably unimportant in the long run. At issue was whether the court could decide the constitutional challenge to the health care law at this point, since to do so would violate the general rule requiring people to pay their taxes first, and then litigate any objection later. That rule was enacted by Congress in 1867 to ensure a steady flow of revenue to run the country. But the court has allowed exceptions to the rule, and during Monday's arguments, the justices seemed inclined to view this case as one of those exceptions.

Because the Obama administration and the challengers want the case resolved now, the justices appointed lawyer Robert Long to defend the proposition that the court should wait to hear any challenge until a penalty is paid in 2015, after the individual mandate kicks in.

Justice Sonia Sotomayor, for instance, asked what the harm would be if the constitutional challenge is resolved now, before any tax penalty is paid.

"What is the parade of horribles that you see occurring?" she asked.

Lawyer Long responded that the government would face a flood of legal challenges to other taxes, thus tying up revenue collection in the courts for years.

Is The Penalty A Tax?

The justices asked Long why the penalty provision in the health care law is a tax at all, since there is no punishment for failure to pay it.

He replied that the tax penalty is calculated by the IRS, based on income, and collected by the IRS at the time taxes are filed.

Solicitor General Donald Verrilli Jr., arguing for the government that the case should go forward, seemed to have a slightly easier time of it, except for one particularly thorny question from Justice Samuel Alito.

Verrilli replied that penalties enacted under the congressional taxing power are not necessarily taxes.

Gregory Katsas, representing the challengers, also argued that the court should go ahead and rule on the constitutionality of the law without waiting for someone to be assessed a penalty.

His argument prompted Justice Stephen Breyer to challenge Katsas on Congress' intent when it passed the 1867 law.

"One thing that's relevant in my mind is that taxes are, for better or worse, the life's blood of government," Breyer said. Congress quite reasonably usually requires people to pay their taxes before challenging them in court because to do otherwise would mean that "500 federal judges" would "be substituting their idea" of when there should be an exception to the tax law. By requiring people to pay first and litigate later, he suggested, Congress was ensuring a more orderly process.

Katsas answered that the challengers don't dispute the constitutionality of the tax penalty in the Obama health care law; the challengers only contest the mandate. Chief Justice John Roberts didn't seem to buy the argument.

"Why would you have a requirement that is completely toothless?" he asked. "You buy insurance or else. Or else what? Or else nothing."

If Monday's argument was a hallmark of legal gibberish, Tuesday's argument challenging the constitutionality of the individual mandate is likely to provide plenty of fireworks.

The lawyers have already laid the fuses. Tuesday the justices will light them.