Accessibility links
Kitchen Window: Take Time To Savor The Borek, A Flaky Turkish Snack Savory fillings are rolled up in dough to form half-moons, narrow cigars, coiled snails or ornate roses, or cut into dainty squares from a large pan. It's like a little gift-wrapped package with a delicious surprise inside, built for enjoying slowly.

Take Time To Savor The Borek, A Flaky Turkish Snack

Take Time To Savor The Borek, A Flaky Turkish Snack 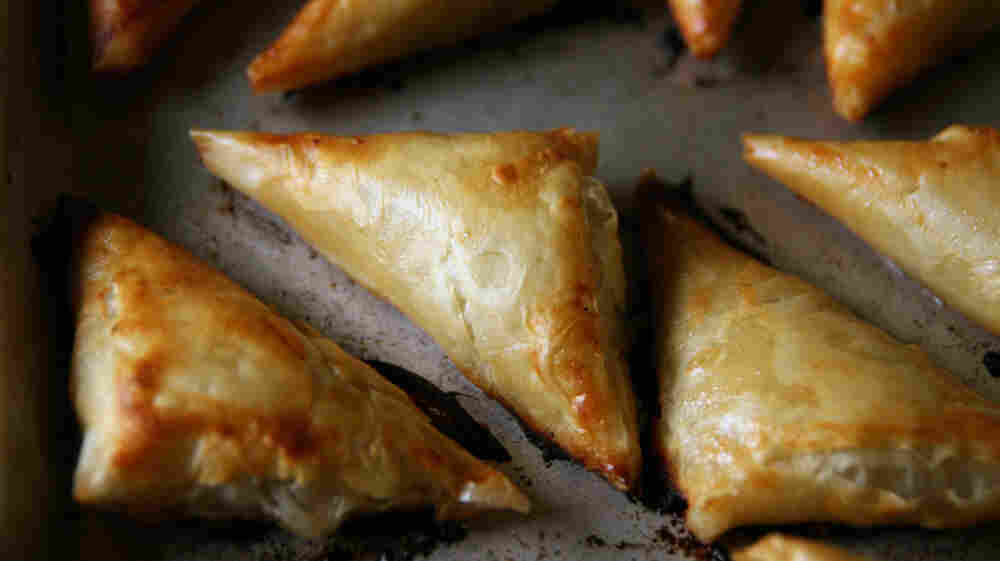 It's like a little gift-wrapped package, just for you, with a delicious surprise inside. And it's often a bit rich ... so it's practically built for enjoying between sips of a nice hot beverage.

It seems that almost every country knows how to snack better than we do. We grab coffee and a muffin from a drive-through, or mindlessly reach into the chip bag while staring at the screen on our desk. I recently visited a friend in Spain's Basque country who pointed out, with disdain, the lone cafe in his town that would give you coffee in a to-go cup rather than the standard little demitasse. The idea that you wouldn't have a few minutes to sit and fully appreciate a cup of coffee and a little snack, either with a friend or the daily paper, was nearly unfathomable.

I hear where he's coming from. Every now and then, when I catch myself wolfing something down without even registering (let alone appreciating) it, or forgoing breaks altogether, I make a mental note to make up for it. With a proper cup of tea, a proper moment of respite. A proper borek.

Borek are delicious little turnovers from Turkey, the country that invented the meze (well, the word, anyway). In fine Ottoman fashion, Turks are known for putting out table-groaning displays of little bites, from tangy thick yogurt to savory stuffed vegetables. However, as a fan of all things wrapped in dough, I gravitate toward borek.

Deena Prichep is a Portland, Ore.-based freelance print and radio journalist. Her stories on topics ranging from urban agriculture to gefilte fish have appeared on Morning Edition, All Things Considered, Marketplace, The Splendid Table, Voice of America, The World and Northwest News Network, and in The Oregonian, Vegetarian Times and Portland Monthly. She chronicles her cooking experiments at Mostly Foodstuffs.

Mediterranean Flatbreads: A Framework For Flavor Jan. 11, 2012
Grown-Up Apples And Honey For Rosh Hashana Sept. 21, 2011
The Lighter Side Of Traditional Soviet Summer Fare July 20, 2011
Party Like The Swedes On Summer Solstice June 15, 2011

Maybe it's because I don't get enough Turkish food in my life. Or maybe it's because an individual borek, like any sort of dumpling or turnover, just seems so lovely. It's like a little gift-wrapped package, just for you, with a delicious surprise inside. And it's often a bit rich, either from a cheese filling or the oil/butter brushed between layers to keep pastry crisp, so it's practically built for enjoying between sips of a nice hot beverage.

Many countries have their own version of savory pastry-covered turnovers, from samosas to empanadas — it's too good an idea to stay in one place. And it's no surprise that Turks, the people behind phyllo dough (don't let the Greeks tell you otherwise), have a particularly developed tradition. Borek are made at home as delicate party snacks or enjoyed in shops as a little break, either with a cup of tea or a glass of tangy yogurt-based ayran.

Borek take so many forms that it's almost hard to talk about them as a whole. But let's start at the outside: the dough. Your Turkish mother might make her own, but these days it's totally acceptable to pick up a package of phyllo for those flaky layers (if you live in a place with a particularly well-stocked Middle Eastern market, you can seek out yufka, a slightly thicker version of phyllo that is favored for certain borek). The layers can be greased for crispness, moistened with a savory custard, or even boiled like pasta (for the famous water borek). Alternatively, they can be made with puff pastry for a slightly flakier version.

Fillings also vary, from lamb to vegetables to briny cheese, depending on the season or region (borek have spread beyond Turkey, to become a standard in the Balkans, or a staple of Sephardic cuisine). The fillings are rolled up in dough to form empanada-like half-moons, narrow cigars, coiled snails or ornate rose shapes, or cut into dainty squares from a large pan.

Yes, "borek" covers a pretty big catchall category, encompassing all sorts of delectable snacks. But this wide range shouldn't be off-putting — it makes it all the more likely that you'll find a variation you adore. So find a recipe, put the kettle on, and take some time out of your day to enjoy the moment.

Turkish borek can be made into beautiful shapes, turning pastry into delicate roses. Here we take a shortcut to a less involved but still somewhat floral-inspired approach, using puff pastry to create beautiful crisp cheese borek. These make addictive party snacks. Feel free to make up more than you need and freeze, unbaked, for your next party. They can be transferred directly from the freezer to the oven and will bake with just a few minutes' extra oven time. 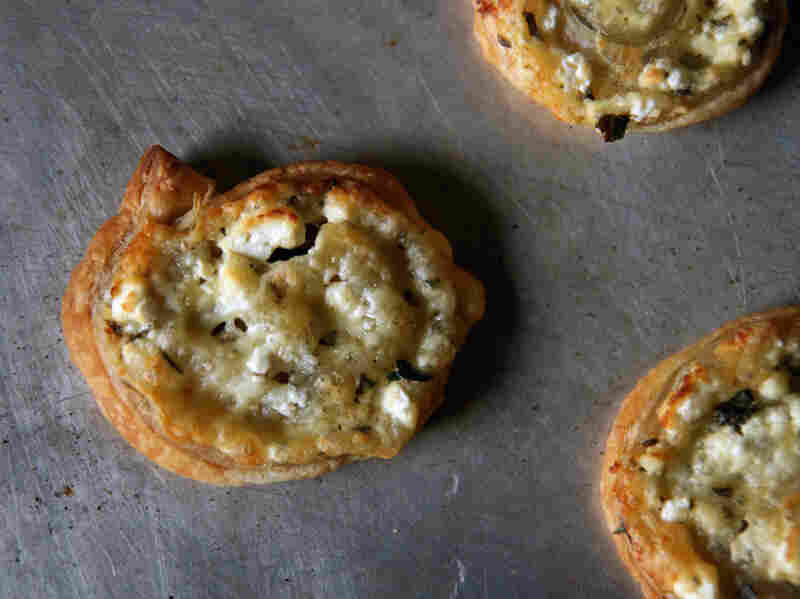 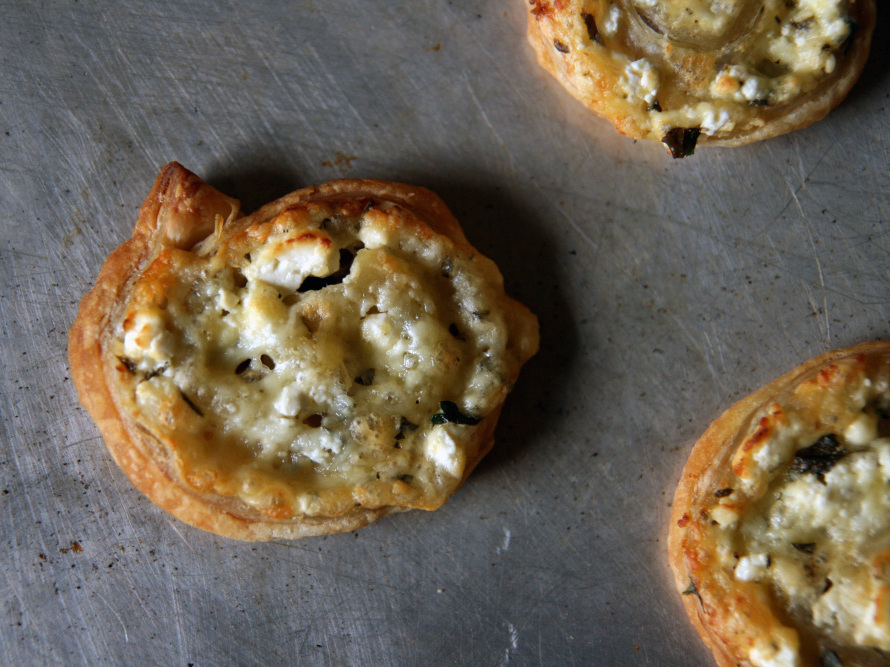 In a bowl, mix together the feta, kashkaval and parsley until well-combined.

Lightly dust a clean countertop with flour, and lay out one of the sheets of puff pastry. Sprinkle half of the filling over the pastry, spreading it evenly to the ends, leaving a 1-inch exposed lip along one long edge. Begin rolling from the opposite edge, tucking along the way to keep things snug, then pressing/rolling to secure the roll when finished.

Take a sharp knife, and cut 1/2-inch rounds. Take each spiral, and press it between two hands to flatten slightly and compact the filling into the dough. Place on a baking sheet (these will expand a bit, so leave room). Repeat with remaining dough. Bake for 15 to 20 minutes, until they puff and brown. Transfer to a serving tray, slice the tomatoes into thin wedges, and top each spiral with a wedge of tomato (optional, but the bright, juicy tomato is a nice counterpoint to the crisp, cheesy spirals). Serve warm.

*Kashkaval, a somewhat firm sheep's milk cheese, can be found in markets that carry European products.

Cigar-shaped borek are common in Turkey, usually filled with meat or cheese and often deep-fried. This somewhat lighter version, inspired by a recipe in Eric Treuille's Canapes (Dorling Kindersley 2009 in the U.K.; U.S. edition is titled Hors d'Oeuvres), pairs Mediterranean artichokes with bright fresh herbs. The lemony mayo might not be terribly traditional, but it pairs quite well. 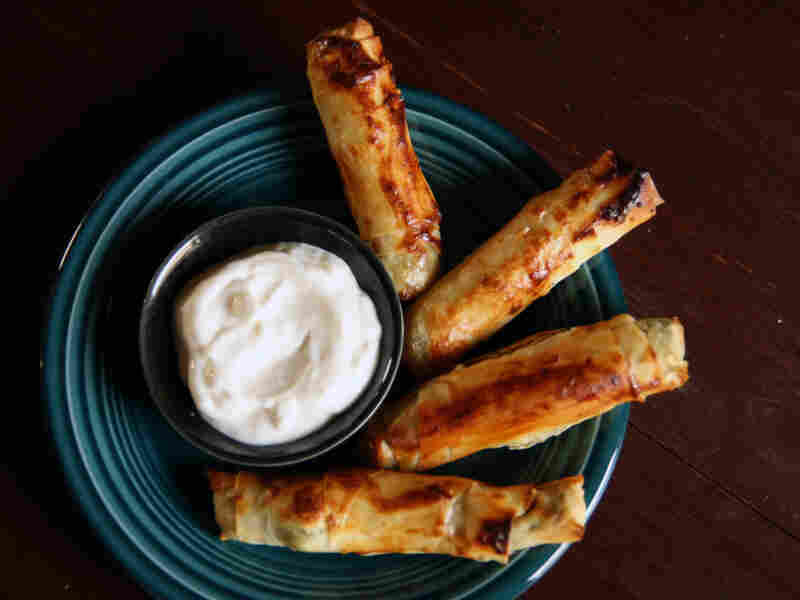 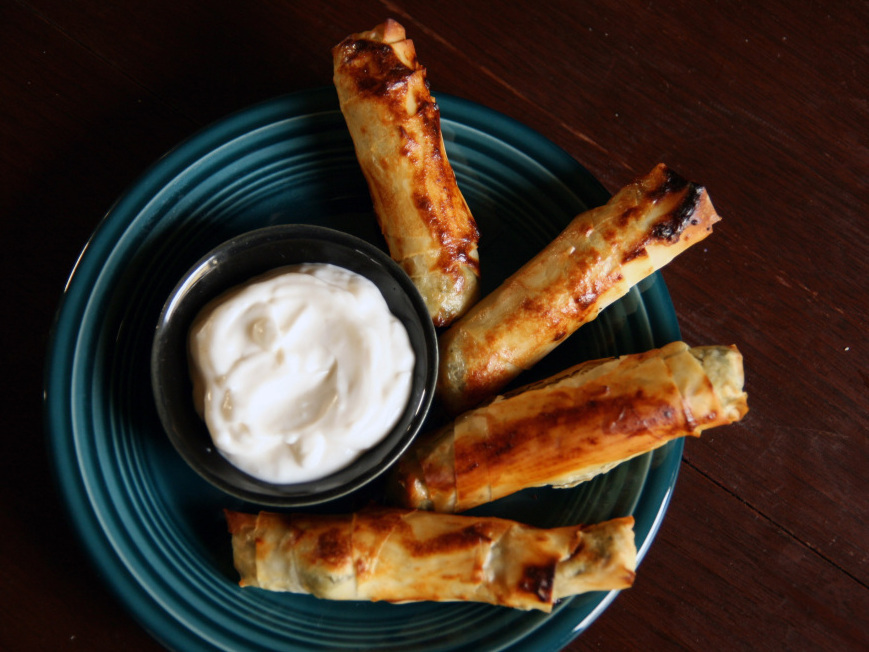 Place the artichokes, cheese, garlic, parsley, mint, salt, pepper and egg in a food processor and pulse until reduced to a slightly chunky mixture. 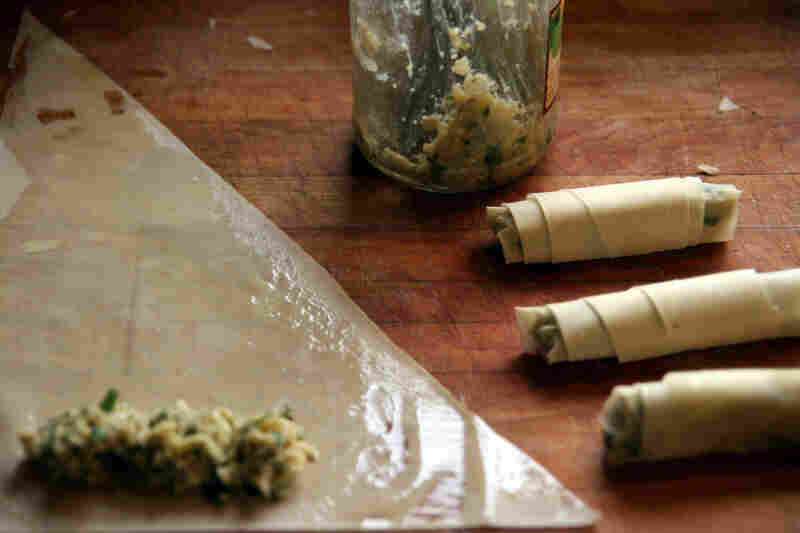 The artichoke and cheese filling is rolled up in a triangle of phyllo. Deena Prichep for NPR hide caption 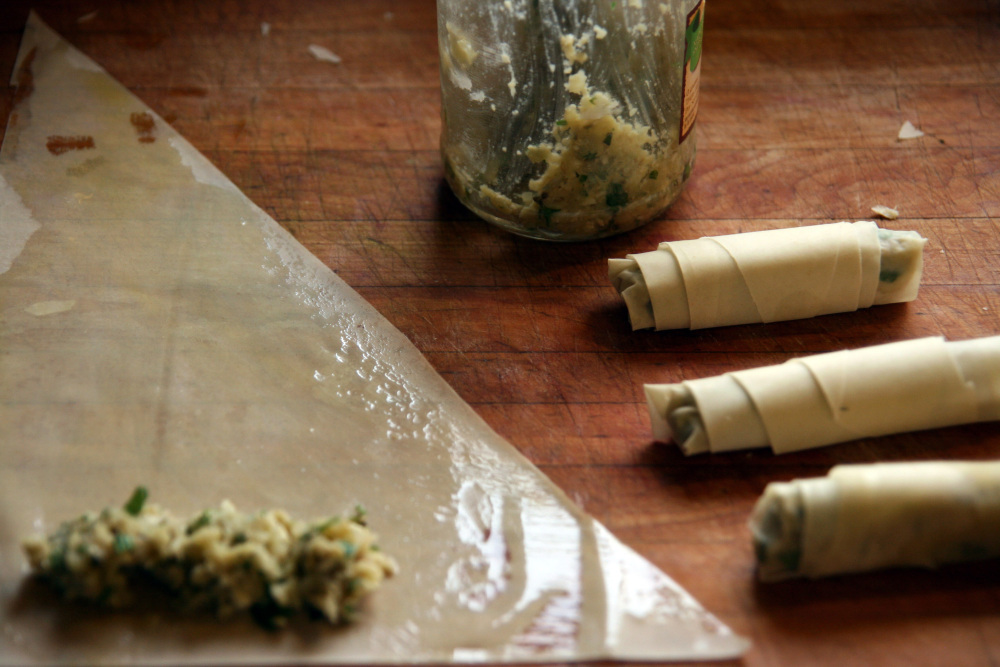 The artichoke and cheese filling is rolled up in a triangle of phyllo.

Unroll the phyllo dough, leaving the unused portion covered with a dishtowel to keep from drying out. Place a sheet of phyllo on your work surface, and brush it lightly with the melted butter. Cut it from corner to corner, creating two triangles. Take a small lump of filling (about 1 1/2 tablespoons) and shape it into a cigar shape. Place it along the shortest edge of the triangle, opposite the long, slim tip. Fold in the sides snugly around the filling, then roll up toward the tip to create a narrow cigar shape. Place on the baking sheet, and brush with melted butter. Repeat with remaining filling and phyllo. Bake until the borek are browned and sizzling, about 25 minutes.

To serve, mix together the mayonnaise with the lemon juice. Serve alongside the warm borek.

*Kasseri, a somewhat firm sheep's milk cheese, can be found in markets that carry European products.

This filling, adapted from a recipe in Silvena Rowe's Purple Citrus and Sweet Perfume (Ecco 2011), combines rich lamb with tangy tart apple and pomegranate molasses, pine nuts, spinach and warm spices. In this version, it's folded up in phyllo for a classic triangular borek. The yogurt/egg glaze is optional, but makes a lovely finish. 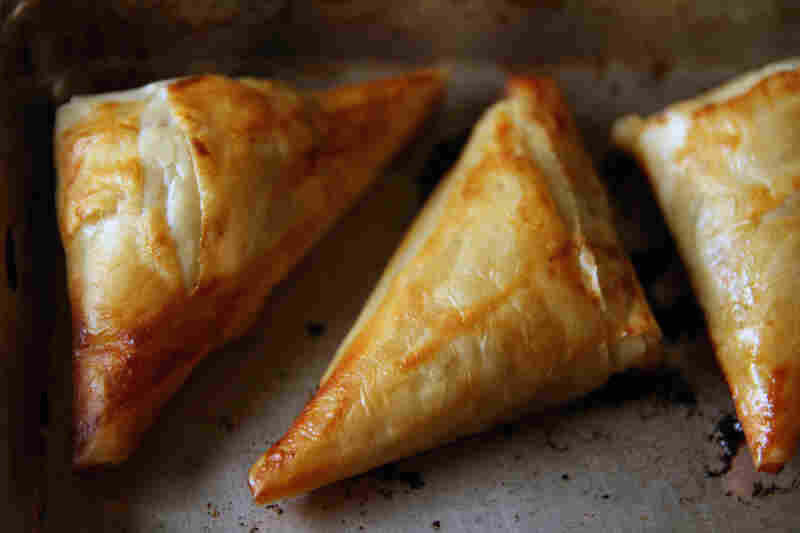 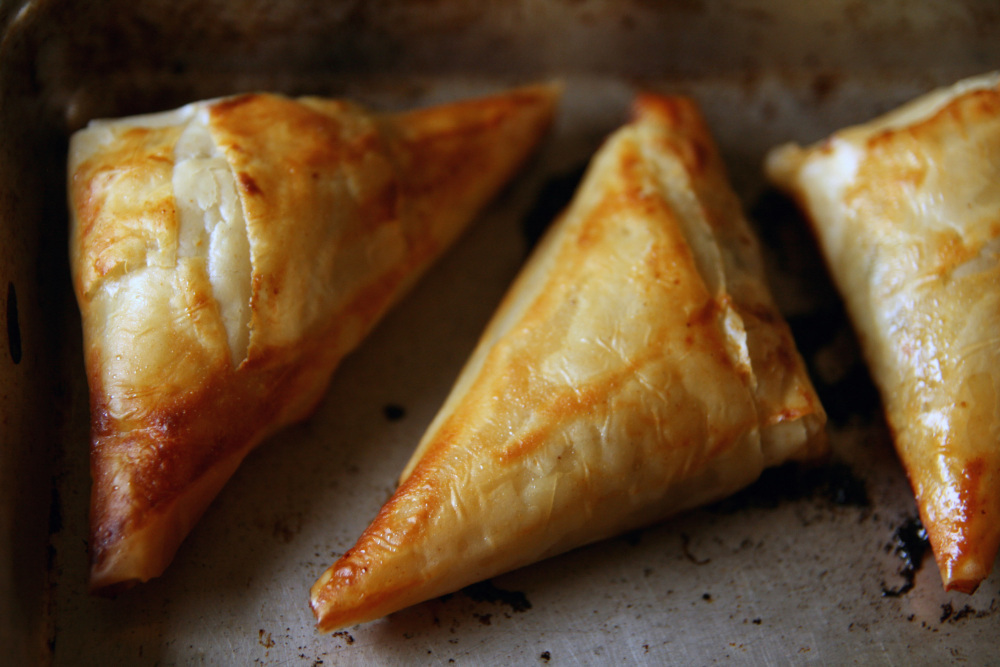 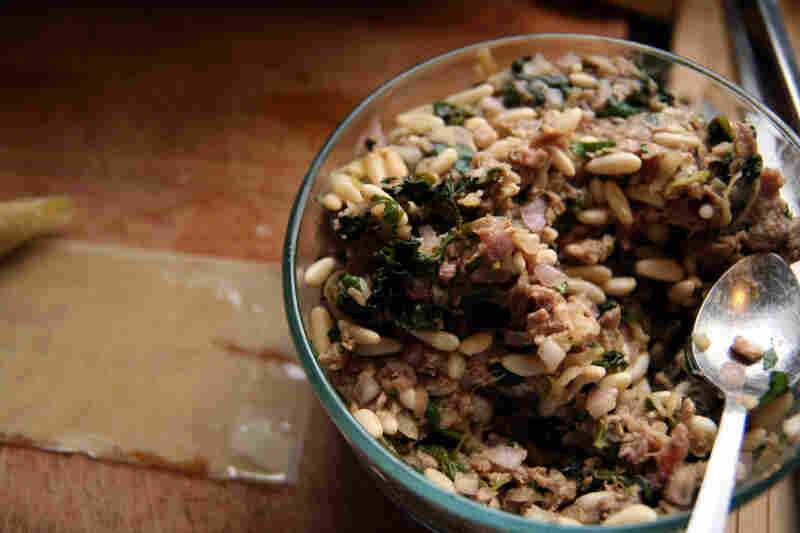 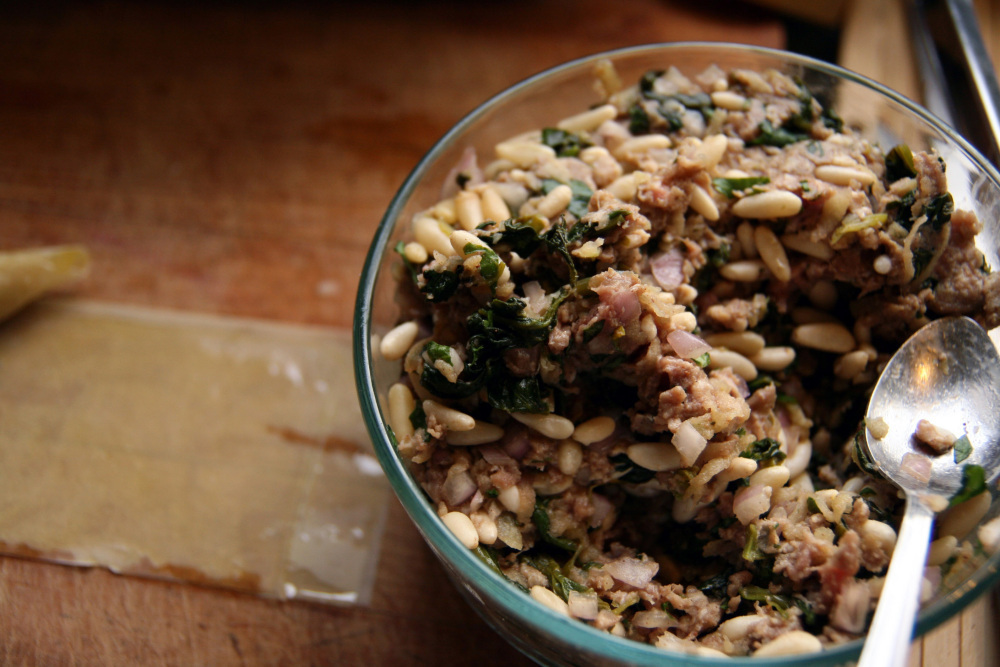 Bring a large pot of water to a boil.

When the water comes to a boil, add the spinach, blanch for 1 minute, then drain and squeeze dry. Chop coarsely and add to the lamb mixture. Mix well.

To assemble borek: Melt the butter. Unroll the phyllo dough, leaving the unused portion covered with a dishtowel to keep from drying out. Place a sheet of phyllo on your work surface, and brush it lightly with the melted butter. Cut it down the middle width-wise, to create two long rectangles. Fold each one in half width-wise again, to create two even skinnier rectangles. Brush again with butter. 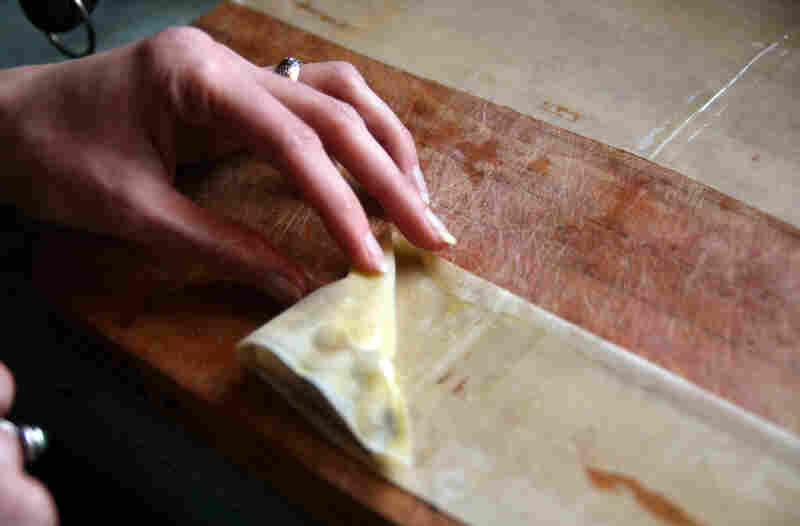 Sheets of phyllo are folded over the filling in a triangle shape, much like folding a flag. Deena Prichep for NPR hide caption 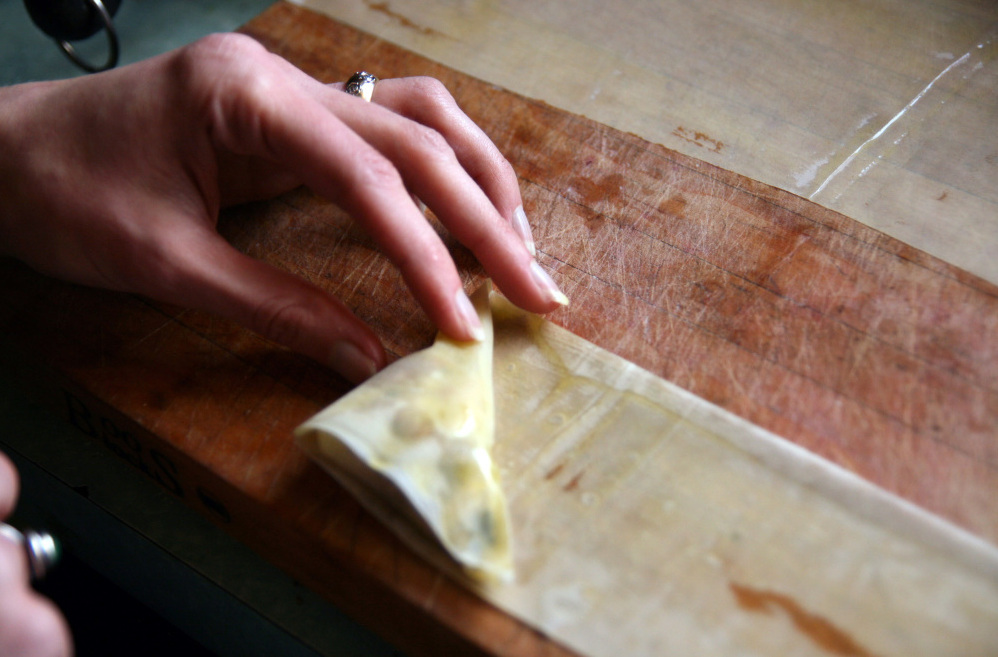 Sheets of phyllo are folded over the filling in a triangle shape, much like folding a flag.

Place a small lump of filling (about 2 tablespoons) in the corner of each strip of phyllo. Fold over in a triangle and fold, like a flag, to form a neat triangular package. Place on a baking sheet and repeat with remaining phyllo and filling.

When all of the borek are shaped, mix together the yogurt, egg and milk (if you have any remaining melted butter, you can toss it in as well). Brush the borek heavily with this mixture and allow to soak in for at least 15 minutes (it will look fairly ugly, but don't worry because it will bake up nicely).

While the borek are soaking in the glaze, preheat oven to 400 degrees. When they're ready, transfer the borek to the oven and bake until golden and sizzling, about 30 minutes. Enjoy warm or at room temperature.

Unlike Greek spanikopita where the phyllo dough is oiled between layers to make it shatteringly crisp, this Turkish version moistens the phyllo with layers of savory, cheesy custard. The pie puffs up like a souffle, its eggy softness perfectly offsetting the layer of feta-studded spinach filling. Cut this into small squares to keep its richness from being overwhelming. This recipe is adapted from Arabesque: A Taste of Morocco, Turkey and Lebanon, by Claudia Roden (Alfred A. Knopf 2005). 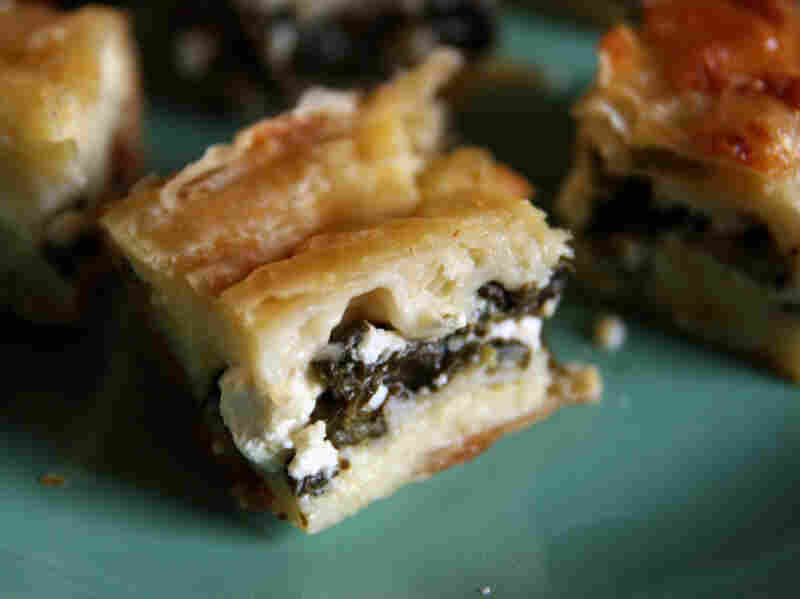 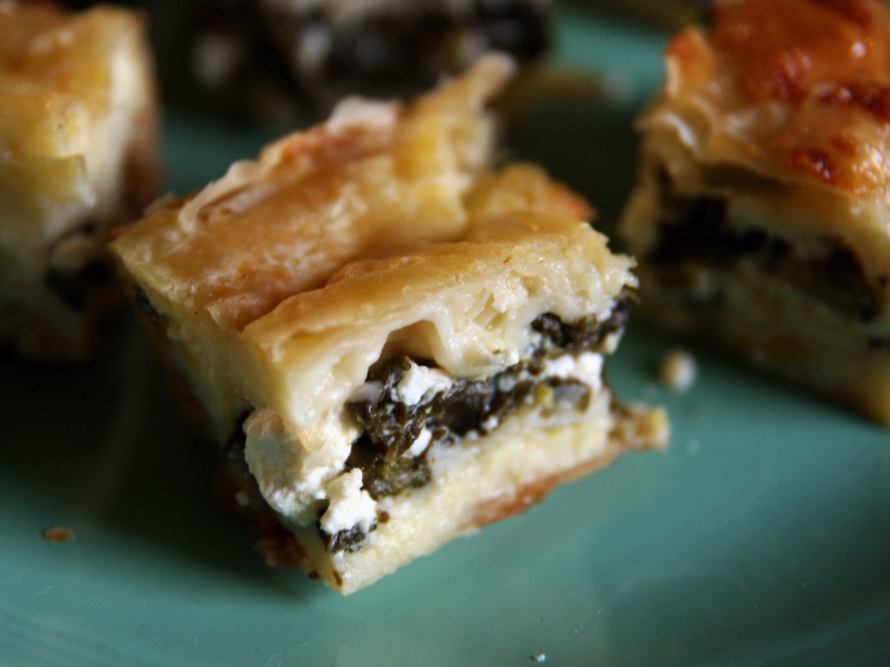 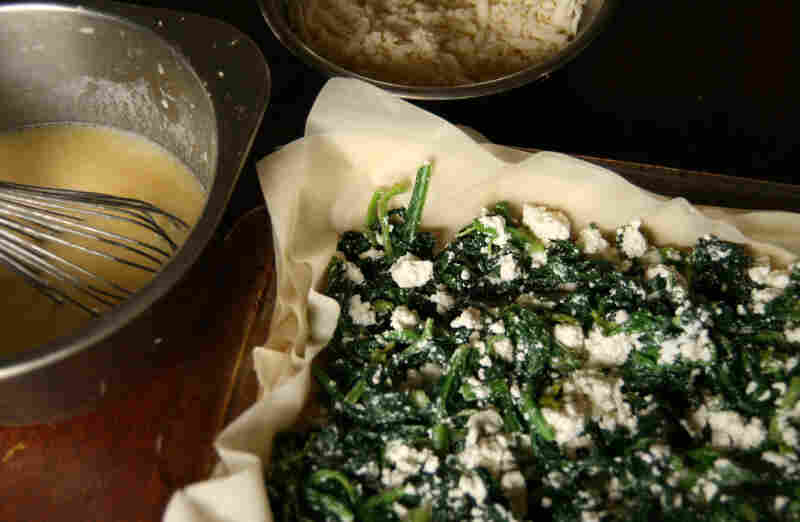 A pan is filled with alternating layers of spinach filling, dough and a cheesy custard. Deena Prichep for NPR hide caption 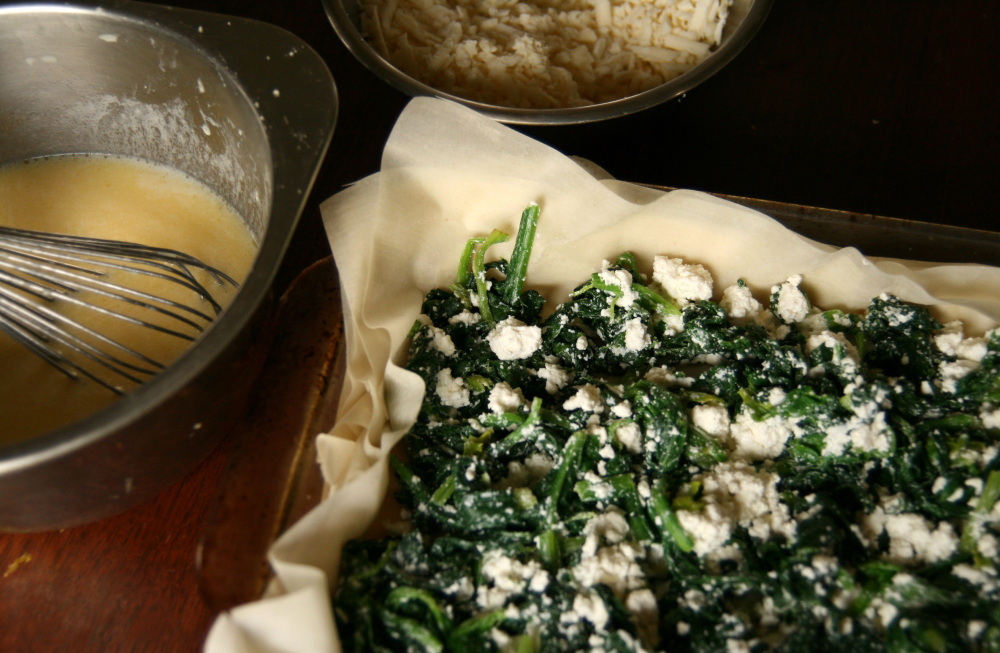 A pan is filled with alternating layers of spinach filling, dough and a cheesy custard.

In a steamer basket, or a pot with a small amount of water, cook spinach until wilted. Transfer to a strainer. When cool enough to handle, press out as much water as possible.

In a medium bowl, mix the drained spinach with the crumbled feta.

In a large bowl, whisk the eggs. Melt butter in a small saucepan set over medium-low heat. Add the milk, and heat until mixture is warm but not hot. Whisk butter-milk mixture into the eggs. 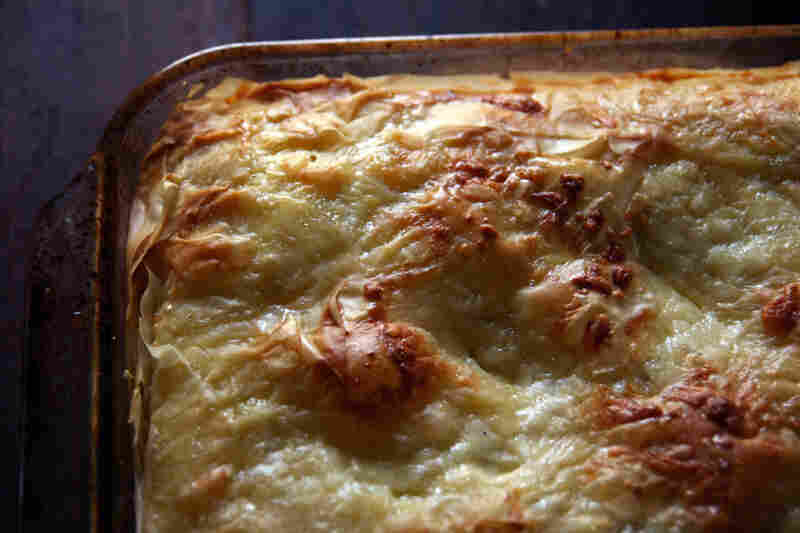 Baked, the layers puff up into a golden brown souffle. Deena Prichep for NPR hide caption 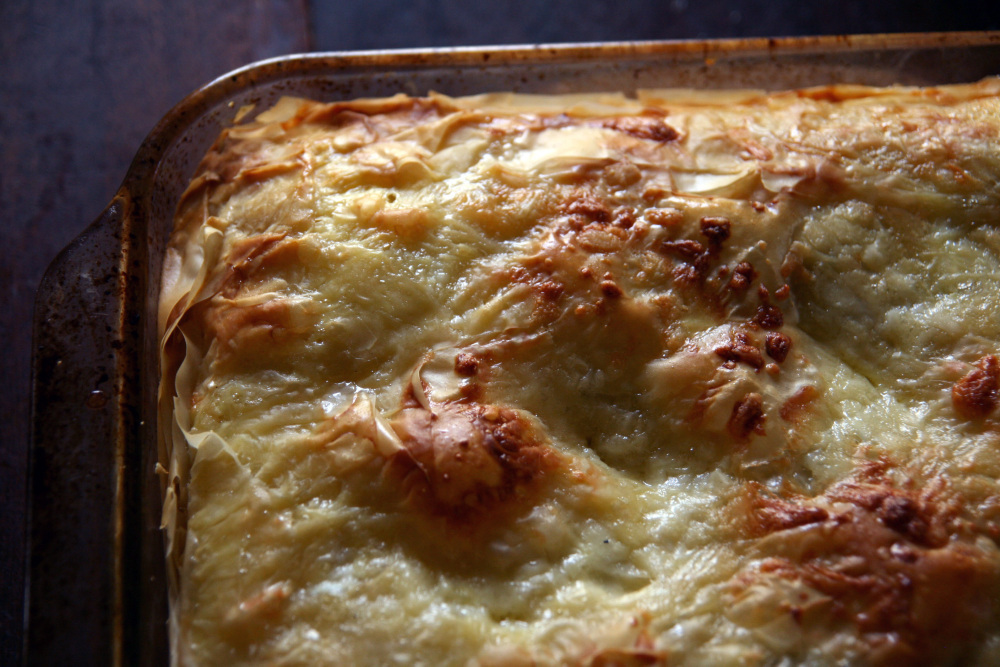 Baked, the layers puff up into a golden brown souffle.

Grease a 9-by-13-inch baking dish. Lay a sheet of phyllo in the bottom of the dish. Drizzle a few tablespoons of the egg mixture evenly over the sheet, then sprinkle with a small handful of the cheese. Repeat the process until you've used up half of the phyllo, cheese and egg mixture.

Tuck or trim any overhanging phyllo and bake for 30 to 45 minutes, until the casserole puffs and browns. Allow to cool slightly, cut in squares and serve.

*Kasar, a piquant, firm sheep's milk cheese, can be found in markets that carry European products.