Accessibility links
Mandate's Fate Seems To Rest On Kennedy, Roberts After Tuesday's Supreme Court arguments, it is clear where the balance of power lies — in the votes of Chief Justice John Roberts and Justice Anthony Kennedy. And the questions they posed to the government were far more direct than the questions posed to the challengers. 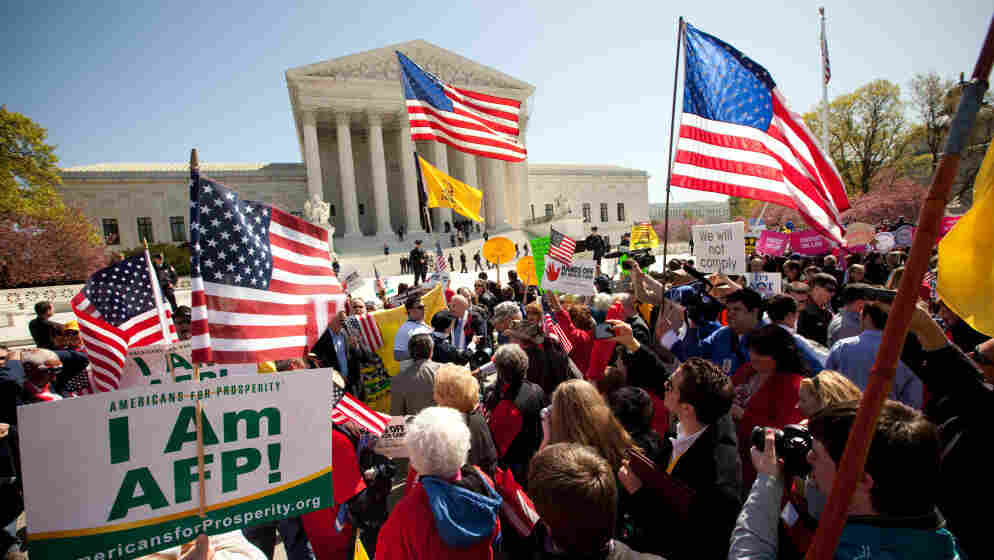 Demonstrators both for and against the new health care law turned out on the steps of the Supreme Court on Tuesday. John Rose/NPR hide caption 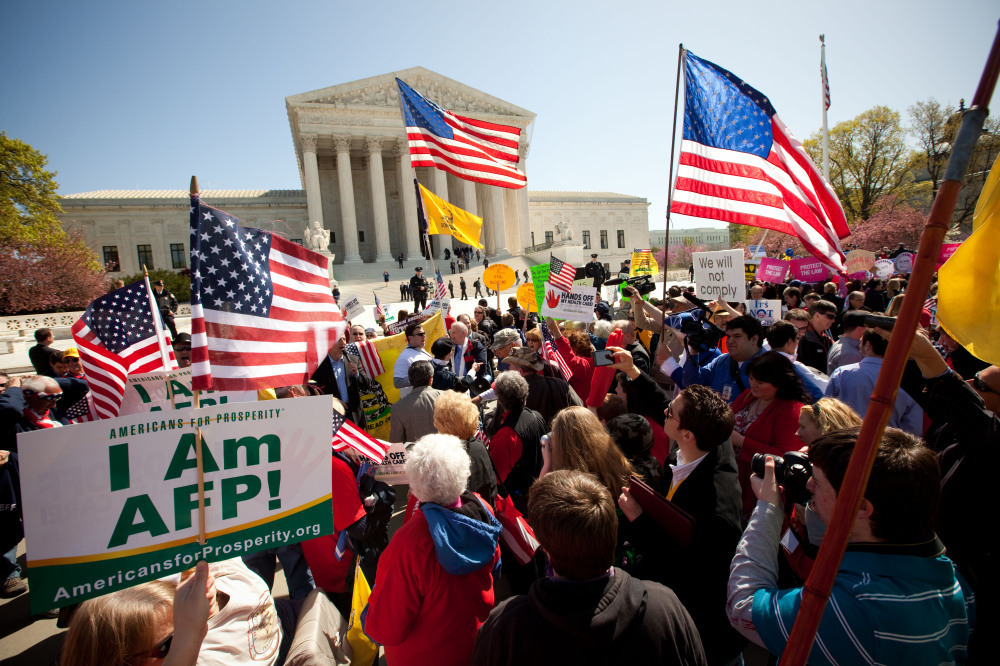 Demonstrators both for and against the new health care law turned out on the steps of the Supreme Court on Tuesday.

At the U.S. Supreme Court on Tuesday, hostile questioning from key justices seemed to imperil the individual mandate, the central provision of the Obama health care overhaul.

The mandate requires virtually all Americans to have health insurance — through Medicare, Medicaid or employer-provided insurance, or, if you are not covered by any of those, through individual insurance that you pay for.

Solicitor General Donald Verrilli seemed unusually nervous at first, asking for a moment to sip water to clear his throat. He had good reason for his nerves.

Conservative Justices Antonin Scalia and Samuel Alito pounced almost immediately. Alito suggested if health care can be mandated, funeral insurance would be next. And Scalia said the young and the healthy are paying way more than is needed for their own immediate care. He said young people are not "stupid" and should be able to buy insurance when there is a "substantial risk of incurring high medical costs."

But for supporters of the law, the worrisome questions came from Justice Anthony Kennedy, the justice who most often swings the court in 5-4 decisions.

"I understand that we must presume laws are constitutional," Kennedy said. "But even so, when you are changing the relation of the individual to the government in this ... unique way, do you not have a heavy burden of justification to show authorization under the Constitution?"

Chief Justice John Roberts also questioned the government's argument that the health care market is unique. He noted that there are other emergency services such as police, fire, ambulance and roadside assistance where "you don't know when you're going to need it." In addition, Roberts went on to question the breadth of the health care plan.

"You're requiring people who are ... never going to need pediatric or maternity services to participate in that market," Roberts said.

Justice Kennedy piled on, albeit gently, saying that unlike past regulations, this mandate "changes the relationship of the federal government to the individual in a very fundamental way."

When several conservative justices noted that the government could have enacted a single payer program, like Medicare, where the government pays for all the costs, Solicitor General Verrilli batted the question back. It is "ironic," he said, that the health care law, which was written to rely on the private market, was being criticized for not being more like government sponsored programs — i.e., Medicare and Medicaid.

When Verrilli sat down and the challengers rose to argue, the worm turned. This time it was the court's liberals — justices Ginsburg, Elena Kagan, Sonia Sotomayor and Stephen Breyer — who did the pounding, joined more mildly on occasion by Justice Kennedy and Chief Justice Roberts.

Paul Clement, representing the 26 states that contend the law is unconstitutional, said the mandate is being forced onto the backs of young, healthy people to allow millions of older, sicker people to get insurance at an affordable rate.

Clement contended that the government can provide incentives to purchase, as it did in the Cash for Clunkers program, but it cannot impose a mandate to buy.

Chief Justice Roberts pressed him on that point, noting that "the key to the government's argument" is that unlike in the car market, everyone consumes health care, and the question is only when the individual pays for it.

Most people do not have car accidents, observed Justice Sotomayor, but states still require them to have automobile insurance.

Justice Kennedy suggested that everybody is already in the health care market because even those who currently choose not to have health insurance are "creating a risk that the market must account for."

As other justices repeatedly pointed out, those who are insured are paying $1,000 more a year on average in order to cover emergency room care for people who do not have insurance.

Zeroing In On Kennedy And Roberts

Lawyer Michael Carvin, representing the National Federation of Independent Business, at one point noted that Congress has required hospitals to treat people when they come to the emergency room, but he speculated that the percentage of the uninsured who have catastrophes must be a "relatively small fraction."

That prompted Sotomayor to ask: "What percentage of the American people who took their son or daughter to an emergency room and that child was turned away because the parent didn't have insurance — do you think there's a large percentage of the American population who would stand for the death of that child?" she asked. "They had an allergic reaction, and a simple shot would have saved the child."

The alternative, Carvin suggested, is to have people buy insurance at the point when they actually need it.

In rebuttal, Verrilli said that simply would not work. "Think about how much it would cost to get the insurance when you are at the hospital or at the doctor," he said. "It would be unfathomably high."

Pulling back from Tuesday's arguments, it is clear where the balance of power lies — in the votes of Roberts and Kennedy. Yet the questions they posed to the government were far more direct, even passionate, than the questions posed to the challengers.

Near the end of arguments Tuesday, Kennedy noted the government's argument that the insurance market is unique and added that a young, uninsured person is "uniquely ... very close to affecting the rates of insurance and the costs of providing medical care in a way that is not true in other industries. That's my concern in the case."

And Kennedy's concerns could very well determine the outcome of this case.