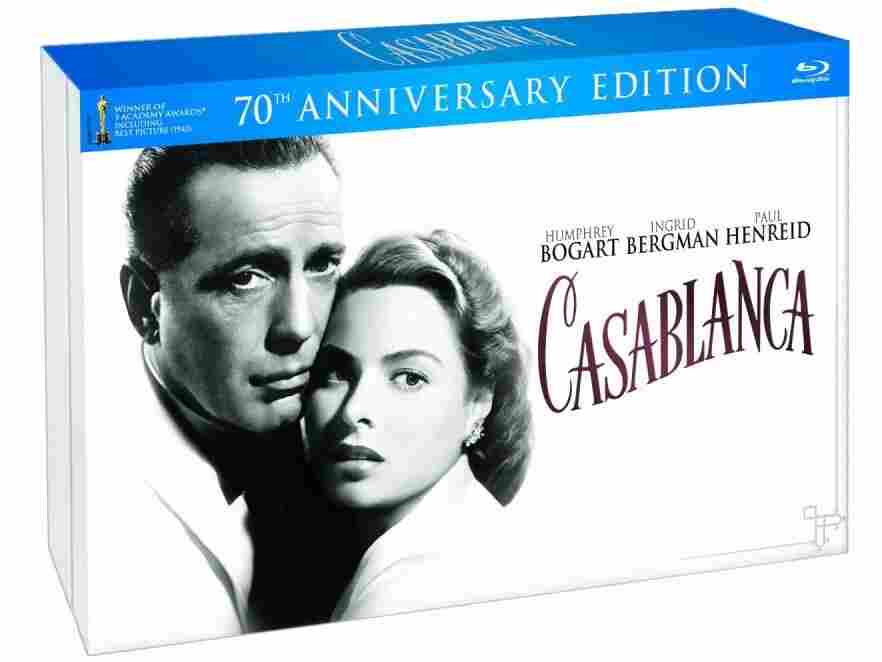 Time now for a home viewing recommendation from NPR's movie critic, Bob Mondello. He's found himself swept up this week by the 70th Anniversary edition boxed set of Casablanca.

Even if you don't know this movie, you know this movie: Bogie and Bergman steaming up Rick's Cafe Americain, drummer Dooley Wilson pretending to tickle the ivories of a piano he couldn't actually play, Peter Lorre sniveling. Paul Henried standing tall, Claude Rains rounding up the usual suspects. People who would otherwise refuse to watch black-and-white movies make an exception for this one, and whole generations can recite the classic lines along with the characters:

"Is that cannon fire or is it my heart pounding?"

"It doesn't take much to see that the problems of three little people don't amount to a hill of beans in this crazy world."

"I'm shocked, shocked to find that gambling is going on in here."

This 70th anniversary edition includes two commentaries (one by Roger Ebert), a whole disk of documentaries, deleted scenes, and even the cartoon "Carrotblanca" starring Bugs Bunny's Bogie and Tweetybird doing a Peter Lorre impersonation. Most of this was included in previous releases. What wasn't is some swag — a set of Casablanca coasters for instance — and a new blu-ray transfer of the film itself, so pristine you can almost see the camera lens reflected when a tear forms in Bergman's eye.

Audience tastes have changed in seven decades, but with Casablanca, the fundamental things apply.