Accessibility links
Texas, Feds Face Off Over Planned Parenthood Texas and the Obama administration are battling over funding for women's health centers in the state. As a result, some Planned Parenthood facilities have closed, limiting access to health care for some women, particularly those on Medicaid. 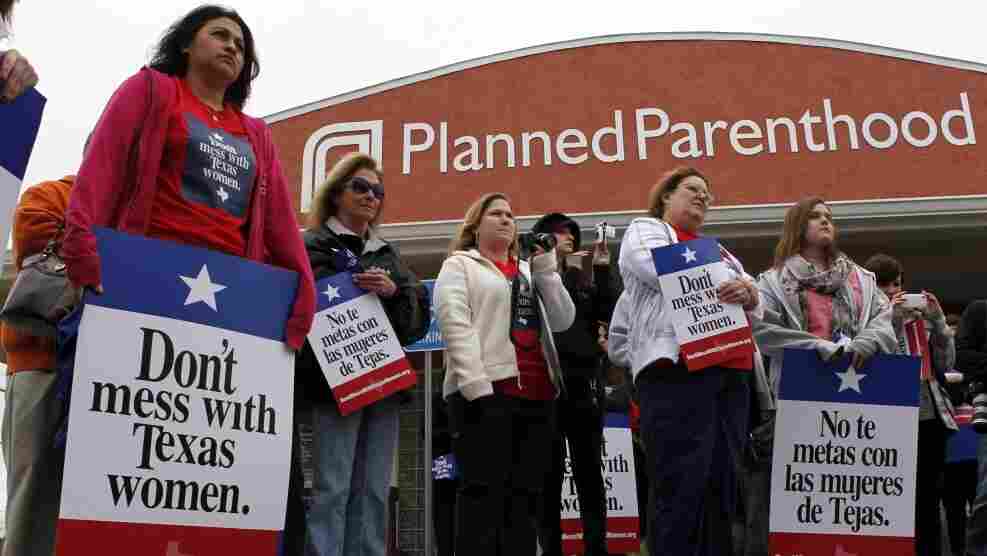 Local citizens and employees of the Planned Parenthood clinic in San Angelo, Texas gather in front of the clinic Thursday, March, 8, 2012 to participate in the "Don't Mess with Texas Women" rally. Patrick Dove/AP hide caption 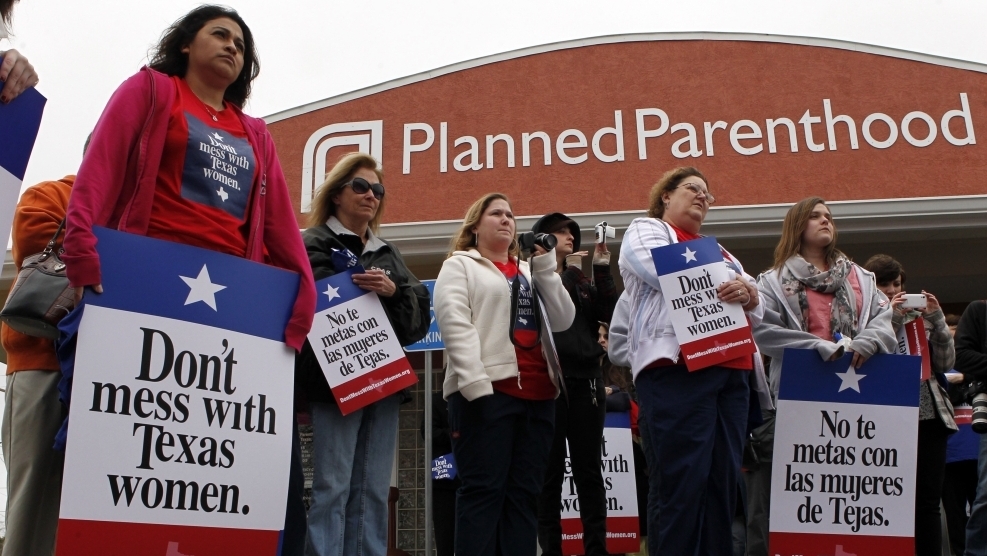 Local citizens and employees of the Planned Parenthood clinic in San Angelo, Texas gather in front of the clinic Thursday, March, 8, 2012 to participate in the "Don't Mess with Texas Women" rally.

Texas and the federal government are going at each other again, this time over Planned Parenthood.

The Texas Legislature cut off all Medicaid money to Planned Parenthood because of its involvement in abortions; in response, the federal government has suspended funding for the state's reproductive health program.

Odessa is a gritty, oil patch city of 100,000 on the flatlands of West Texas, famous for Permian High School "Mojo" football. According to state records, in 2010, 71 percent of all the women in the county who went to a clinic under the Women's Health Program use Planned Parenthood off Grant Avenue in Odessa. These are low-income women seeking birth control, screenings for breast and cervical cancer or testing for sexually transmitted diseases. 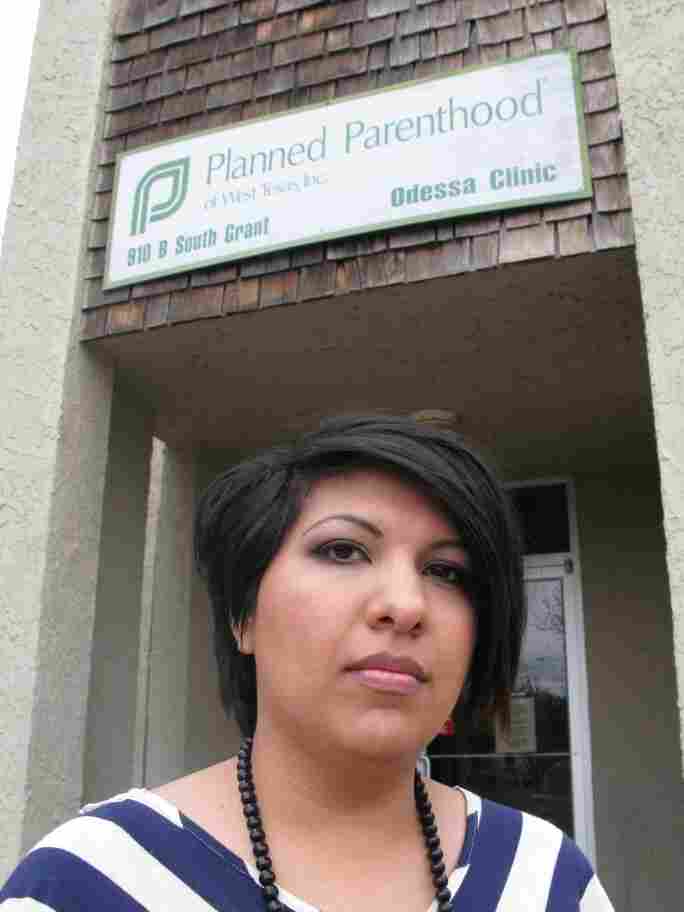 Rene Resendez, a 24-year-old uninsured graduate student, used to be a client at the Planned Parenthood in Odessa, Texas, which closed earlier this month because of state budget cuts. John Burnett/NPR hide caption 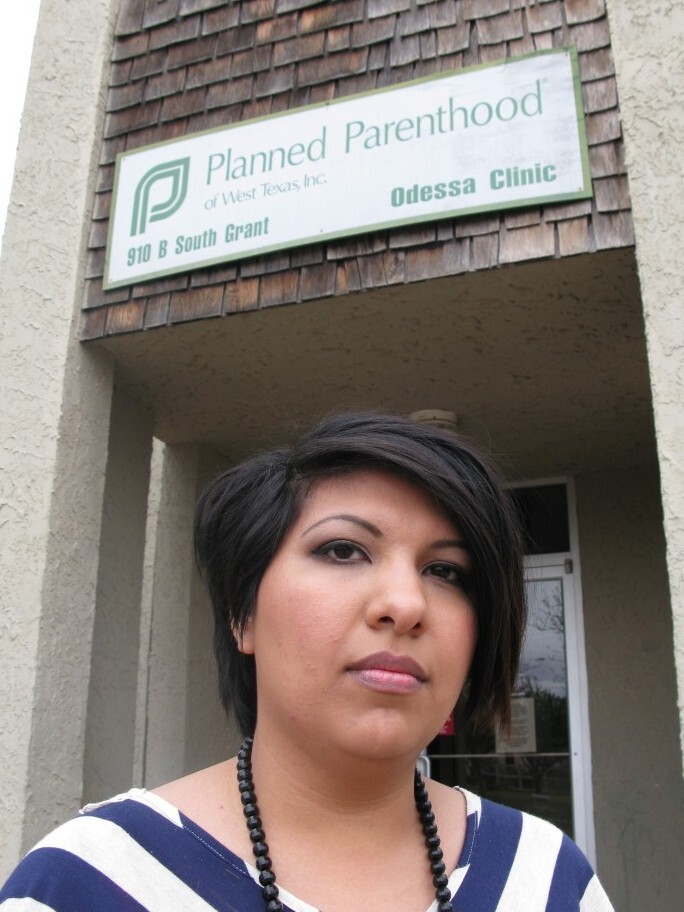 Rene Resendez, a 24-year-old uninsured graduate student, used to be a client at the Planned Parenthood in Odessa, Texas, which closed earlier this month because of state budget cuts.

"We're at the Planned Parenthood in Odessa, which has been shut down due to budget cuts," says Rene Resendez, a 24-year-old uninsured grad student. "Closing this one means about 4,000 women have to go to the Midland center if they need to get their checkups or birth control or anything like that."

The Midland Planned Parenthood is about a half-hour drive from Odessa.

'Not Gonna Let The Program Die'

Publicly funded women's health in Texas has been hit with a double whammy.

First, facing a budget shortfall, the Legislature slashed two-thirds of the money for all family planning in the state — that's why the Odessa clinic closed two weeks ago.

Second, conservative lawmakers want to run Planned Parenthood out of the state.

Last session, the Texas Legislature barred any clinic with any affiliation to an abortion provider from receiving Medicaid money. Planned Parenthood's health clinics are legally separate from its abortion clinics, though they may be under the same roof. What that means is the Planned Parenthood clinic in Midland will soon have to start charging Resendez for health services that used to be free.

"I'd have to call around and check prices, which I didn't have to do when I had the Women's Health Plan," Resendez says. "And from the pricing I've looked at, it's about $125-$200 for a basic annual visit, plus birth control, which, the one I use is $80, so I don't know where that would come from."

But Resendez and the 100,000 other women who use Planned Parenthood in Texas won't be left in the cold, Gov. Rick Perry told Fox News.

Washington, D.C., paid for 90 percent of the Women's Health Program. Now the governor has vowed to find $30 million in state funds to make up the cut-off federal dollars. Anti-abortion activists, such as Mike Banschbach of Pro-Life Midland, claim that Planned Parenthood is replaceable.

"If Planned Parenthood Midland shuts its door, hallelujah," Banschbach says. "We've been working for that for a long time; they've been here for 20 years. There are places for people to go other than Planned Parenthood for non-abortion services."

The Texas Health and Human Services Commission boasts that there are more than 2,500 OB-GYNs and clinics in the state that are eligible to fill the gap left by Planned Parenthood. One of the biggest providers in Odessa, after Planned Parenthood, is the Texas Tech University Health Sciences Center.

"I mean, let's face it, if it was a lucrative program you can bet your boots that the private sector would have already signed up, they would be graciously accepting those patients into their practice," says Dr. Moss Hampton, chairman of obstetrics and gynecology at the health center. Hampton says that Planned Parenthood clinics served patients that other doctors didn't want to accept.

Medicaid reimburses at about half the rate of private insurance. A spokesperson for the state health commission says it is redoubling its outreach efforts to get new doctors to see these low-income women.

Texas has among the highest rates of uninsured women, unwanted pregnancies and cervical cancer in the nation. Women's health advocates say any disruption in the deliverance of reproductive services in this state could be disastrous.