Accessibility links
Raindrops In Rock: Clues To A Perplexing Paradox Ancient fossilized raindrops may offer clues to a paradox that's perplexing scientists: the Earth's atmosphere 2.7 billion years ago was similar to the way it is now, even though the sun was younger and dimmer. 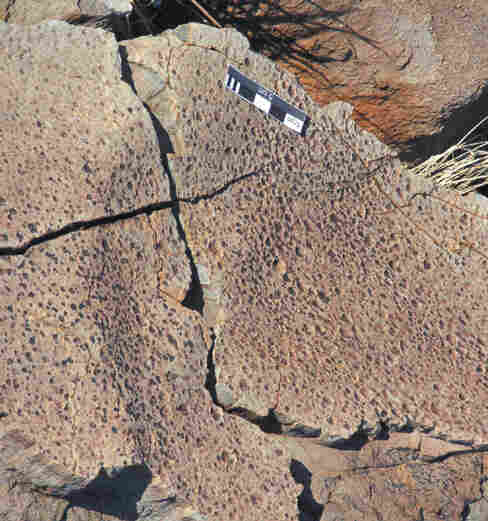 Researchers have analyzed the fossil imprints of of raindrops, like the ones shown here, to study the atmosphere of the Earth, as it was 2.7 billion years ago. The rule at the top is 5 centimeters, or about 2 inches, long. W. Alterman/University of Pretoria hide caption 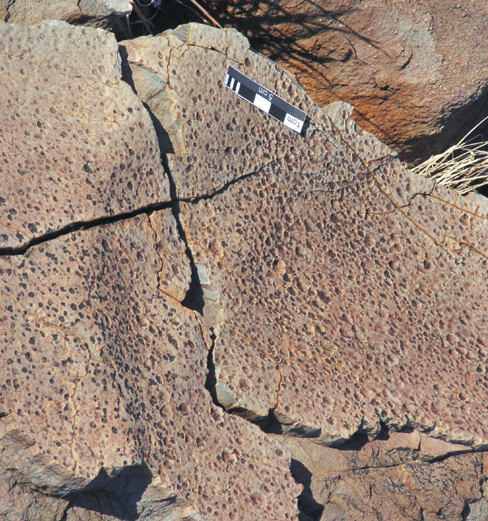 Researchers have analyzed the fossil imprints of of raindrops, like the ones shown here, to study the atmosphere of the Earth, as it was 2.7 billion years ago. The rule at the top is 5 centimeters, or about 2 inches, long.

The late astronomer Carl Sagan presented this paradox to his colleagues: We know the sun was a lot fainter two billion years ago. So why wasn't the Earth frozen solid?

We know it wasn't because there's plenty of evidence for warm seas and flowing water way back then. The question is still puzzling scientists.

But new clues to that paradox come from an unlikely source: fossilized raindrops, from 2.7 billion years ago. Back then, the Earth had no trees or flowers or animals birds or fish. But it did have volcanoes. And it did rain.

You can see evidence of that in a remarkable fossil, found in South Africa. It records an ancient downpour.

"So it rained 2.7 billion years ago on volcanic ash," says scientist Sanjoy Som. "The ash was covered by a very thin but very resistant layer of ash, and all that was again covered by more volcanic ash."

That ash turned to rock. And even today, you can still see the little rims around the small impact craters the raindrops created.

"So they're flawlessly preserved, which is surprising for rocks that are that old."

Som was getting his Ph.D. at the University of Washington, and his advisor suggested that Som examine those fossilized raindrops to see what he might learn about the ancient atmosphere.

"Because I have background in aeronautical engineering I found that challenge super exciting and jumped on it," says Som, who is now at NASA's Ames Research Center.

The scientists knew that the size of raindrops would tell them how thick the atmosphere was back then. Raindrops fall more slowly through thick air than through thin air. So the thicker the air, the more gently they will fall to earth, and the smaller the craters will be.

And the raindrop craters they found were similar to those you get on dusty lava today. So Som and his colleagues conclude that the atmosphere back then was a lot like it is today, maybe a bit thinner, but surely no more than twice as dense.

It's just plain cool to figure out something like that. But the journal Nature highlighted this finding because it touches on Carl Sagan's paradox — that the early earth was warm even though the sun was young and dim.

"Something was keeping the planet warm back then because the sun was fainter, yet there's plenty of evidence in the geological record of ocean sediments and river sediments," Som says.

The easiest answer is that the atmosphere served as an insulating blanket, as it does today. We'd still be a frozen planet if we didn't have the natural greenhouse effect to keep us warm. But it turns out you need a much bigger greenhouse effect to compensate for a faint sun.

"You either need higher CO2 [carbon dioxide concentrations in the atmosphere] or higher CO2 in combination with other greenhouse gases like methane," says Jim Kasting at Penn State University, who has been puzzling over this paradox for years.

But according to some controversial evidence from ancient rocks, there wasn't enough carbon dioxide in the air to get the job done. That's led other people to suggest that maybe the atmosphere was thick with nitrogen.

Nitrogen doesn't trap heat, but if there's a lot of nitrogen in the air, it makes carbon dioxide a better insulating blanket. However, the raindrop results say the atmosphere was not super-thick back then. So you can apparently rule out the nitrogen hypothesis. The paradox remains.

There are lots of other ideas still to test, but precious little evidence from the early days of earth.

And, by the way, while you're puzzling over that, here's something else to think about. The sun is still getting brighter. That is happening so slowly it can't explain our current trend of global warming. But Kasting says it does matter in the very long run.

"Within about a billion years, it should be 10 percent brighter, and that could actually spell the end for earth because in our models that's enough to drive off the earth's water."

And Earth will not be so much fun when the oceans have boiled away. But we have a billion years to figure a way out of that jam.