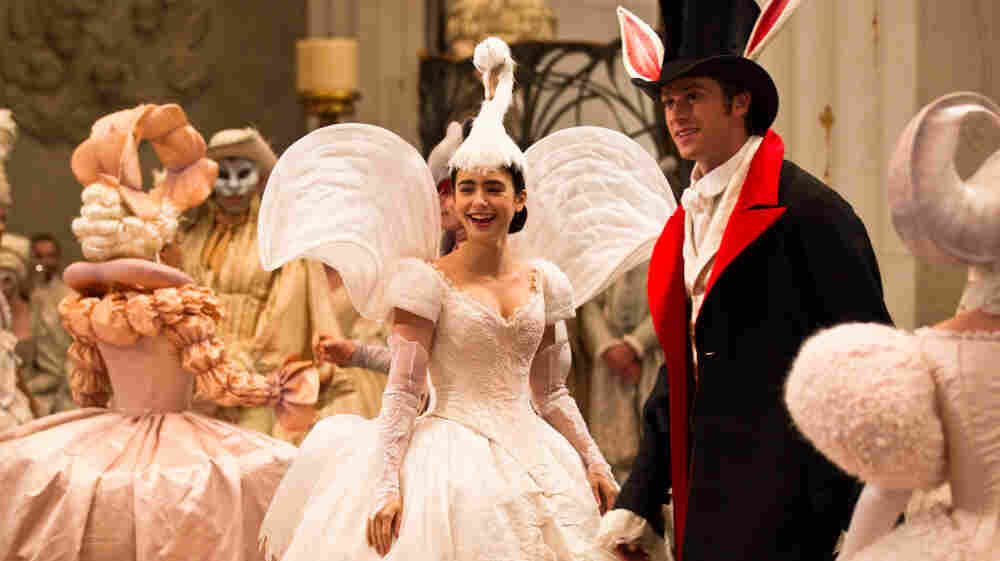 Rated PG for some fantasy action and mild rude humor

From 'Mirror Mirror' - 'Kind Of The Princess'

'Kind Of The Princess'

Mirror Mirror, one of several Snow White adaptations currently kicking around in popular culture, is a welcome and entertaining surprise: a gorgeous, frothy comedy that, like Enchanted and The Princess Bride before it, operates both as a fairy tale movie and as a sendup of same.

Julia Roberts, wearing a series of outsize gowns — the skirts seem to promise they're concealing either industrial scaffolding or Volkswagen Beetles — plays the vain and imperious queen. She's been raising her stepdaughter, the Princess Snow White (Lily Collins), since the death of the king.

(By "raising," here, we mean "locking her in a tower and making 'cuckoo' noises when people ask why they never see her out in public.")

As the movie opens, the queen has a couple of problems: She hates Snow White both for being too beautiful and for being an irritatingly chipper prisoner, plus she's broke, and her only prospect is a baron she considers far too distasteful to marry. Her only friend is her faithful toady and servant Brighton (Nathan Lane), whose fear of the queen's wrath can almost but not quite be passed off as adoration.

With the help of her ominously intoning mirror (envisioned by director Tarsem Singh as an oracle residing in a sort of lake house she visits), the queen plots to do away with Snow White and snag for herself the rich Prince Alcott (Armie Hammer), a royal from a neighboring province who has wandered into her palace half-dressed after being set upon by bandits in the woods.

Shorter-than-average bandits, they are. Numbering seven.

What follows is a kind of mishmash of traditional Snow White storytelling — Snow White does indeed wind up falling in with those seven bandits — and new elements. (Viz.: the queen's attempts to get the prince to marry her instead of Snow; Snow's struggle with the traditional rescue-prone princess role.)

Basic structure aside, what makes Mirror Mirror intriguingly twinkly and endearing is not the story, which is simple enough for little kids to follow and timeless enough for adults to enjoy if they're feeling game.

What works is the execution. The script is slyly affectionate toward the fairy tale genre, both respecting its conventions about red lips and first kisses and winking at its archetypes. That's particularly true when the archetype is Prince Alcott, played by Hammer as both a deeply and profoundly dreamy prince and a frequently ridiculous, befuddled goofball with a tendency to stumble into profound humiliation — which somehow only makes him more ... well, Charming. 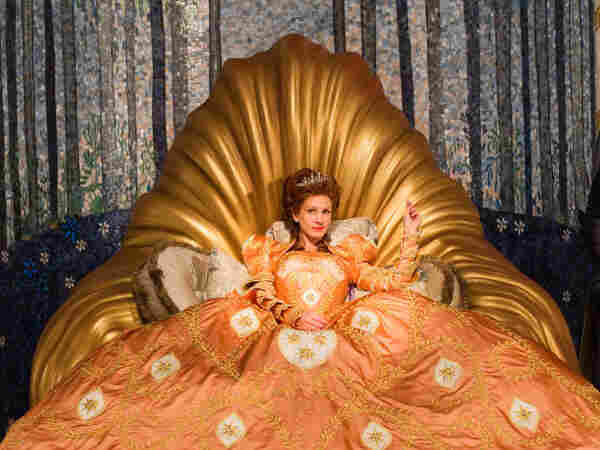 Julia Roberts' vain Queen, broke and jealous of Snow's beauty, flaunts what she has with ornate and lavish dresses. Jan Thijs/ hide caption

Roberts is quite good, lolling about in the role of the bitchy lady whose insecurity about aging would almost be sympathetic if she didn't respond to it by trying to have people killed. (Roberts has never shied away from playing against her original image as a lovable beauty; one of her best-ever scenes is from the romantic comedy Notting Hill, in which she plays an actress who quietly explains, jokingly-but-not, that her future is one of losing her looks and most of her acting opportunities.)

And Collins does fine with the less interesting role of a beautiful princess who does indeed take much more control over her own story than do traditionally distressed damsels, but who still isn't given nearly as much comedy to play as almost everyone else — including the seven "renegades," as they call themselves at one point.

But the performance that lingers after the film like a fizzy champagne buzz is Hammer's. He remains at all times deeply and persuasively sexy, but he also commits utterly to sequences that require a level of silliness that not all traditionally gorgeous young actors can give themselves over to so completely — especially as they're still negotiating a career transition from supporting roles (The Social Network, J. Edgar) to leads.

There are films you see to broaden your mind, and films you see to observe the highest artistry available. But there are also those you see because escapism has its place in a world that — let's face it — often demands to be escaped. You can certainly point to Singh's richly realized visual style as a legitimate artistic flourish, but the potency here is in Mirror Mirror's relentless, infectious good nature. It's not reinventing anything, it's not awards bait, and it's not trying to become your favorite movie of all time. It's a clever, luscious-looking fairy tale you really can take kids to — no allegedly family-friendly snot-and-fart humor here — and a bundle of high style and sharp wit and terrific performances for yourself.