Accessibility links
Can A Small Town Survive Without Its Bank? Alburgh, Vt., is on a remote peninsula near the Canadian border. But even though the town is rural, it's always had a bank. So when its citizens learned the People's United Bank branch on Main Street was closing, they feared their community would turn into a ghost town. 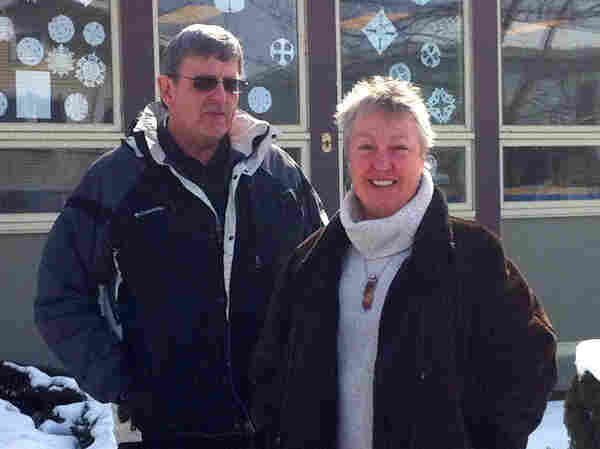 Terry Tatro and Irene Clarke stand in front of the People's United Bank branch on Main Street in Alburgh, Vt. The two feared that the bank's closing would leave a gaping hole in their community. Sarah Harris/VPR hide caption 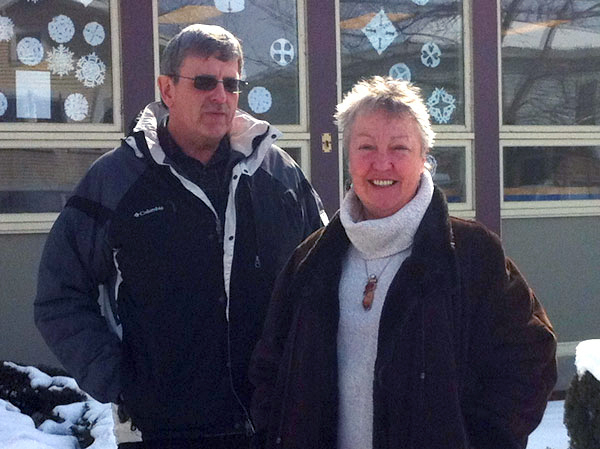 Terry Tatro and Irene Clarke stand in front of the People's United Bank branch on Main Street in Alburgh, Vt. The two feared that the bank's closing would leave a gaping hole in their community.

Alburgh, Vt., is a town with unusual geography: It's on a peninsula that borders Quebec and is surrounded by Lake Champlain. Even though the town is small and isolated, its residents have always had somewhere to do their banking.

But in January, the People's United Bank branch on Main Street announced it was closing its doors. When Irene Clarke heard the news, she decided to do something about it.

"I heard a rumor on Facebook, if there can be such a thing as a rumor, and I was appalled," Clarke says. "The realization, as I started thinking about it, that the businesses here ... I mean even the bingo, they need change. You know, you don't want to drive 20 miles."

So the Find a Bank committee was born, with the goal of recruiting a financial institution to come to town.

Alburgh is a bit dilapidated, with peeling paint and boarded-up windows. There's only one main road, where the library, post office, town hall and bank all sit. There's a Beverage Mart, which also functions as the town's grocery store and restaurant. And there's not a lot else. The committee worried that closing the bank would be a big blow.

"We have, you know, sweet little ladies that walk to the bank to get their $20 out, so they can go get milk and bread and the things they need," Clarke says. "And they're not about to get in a car and drive 15 or 20 miles to another banking institution."

Fears Of Becoming A Ghost Town

"If the bank closes, it's a vital part of our community that's gonna be gone," she says. "You know, so what's next? Are we gonna become a ghost town? With, you know — we have nothing!"

Banking isn't always easy in rural communities. It can be a long drive to the closest bank, and because the banking industry has been consolidating, there are fewer and fewer branches open across the country. But a lot of small towns support thriving local and community banks.

Deborah Markley is co-founder of the Rural Policy Research Institute's Center for Rural Entrepreneurship. After analyzing data from a 2010 study by the National Federation of Independent Businesses, she found that rural business owners seem more likely to be extended lines of credit when they bank locally.

"Eighty percent of them are relying on local banks, as opposed to regional and national banks," Markley says. "And that leads us to think that relationship really matters."

That's the relationship that the Find a Bank committee wanted to rekindle. So it started asking local financial institutions if they'd come set up shop in Alburgh.

After a lot of looking, North Country Federal Credit Union answered the call. Based in Vermont, it has branches in other small towns. It's currently negotiating the sale of the bank branch with People's United.

For town tax collector and Find A Bank committee co-founder Terry Tatro, it comes as a real relief. He says having a place to do banking will help keep the town alive.

"Well, if people have to go out of town to do their banking, they're going to do other services out of town also," he says. "Sooner or later, all you're going to have left is a bedroom community. We're close to that now, and we want to go the other way."

And go the other way they might. Finding a bank took gumption. And keeping Alburgh alive will, too.