Accessibility links
Movie Review - 'Intruders' - When Bad Dreams Feel Alarmingly Real Two children in different countries have similar nightmares about a hollow-faced phantom; one girl's father (Clive Owen) sets out to protect her. Critic Andrew Lapin says this half-baked mix of horror and psychodrama has some interesting ideas but gets lost in generic spookiness. 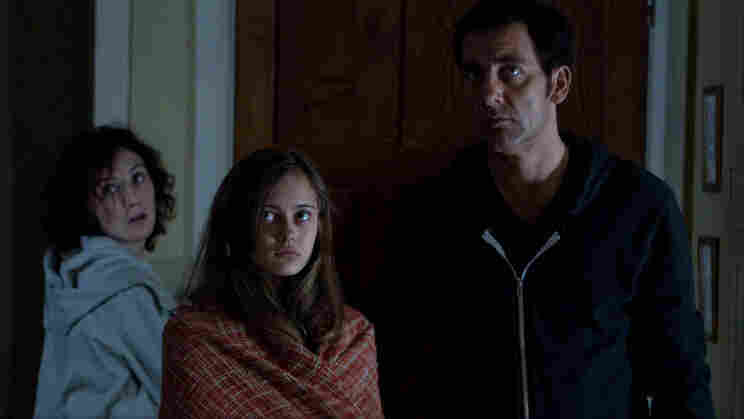 Mia (Ella Purnell, center) has nightmares that may or may not have something to do with the sins of her parents, Sue (Carice van Houten) and John (Clive Owen). Millennium Entertainment hide caption

Rated R for terror, horror violence, some sexuality/nudity and language

From 'Intruders' - 'A Little Lipstick'

Early on in Intruders, a preteen girl (Ella Purnell) finds a half-written monster story wedged inside a tree. Reading it aloud to her classmates, she ensnares their attention with the tale's moody detail, but trails off at the end of the page, unable to think of where to go with the idea on her own.

Intruders itself is the same way. It starts with an intriguing germ of an idea: Where do nightmares come from? Do parents pass them down to their children like heirlooms, or are they born the other way, trickling from the imaginations of the young up to their protectors?

First, though, we'll get some poorly staged fight sequences, followed by an is-it-real psychoanalytical stall and topped off with a coy climax. When the movie's protagonist does later flesh out her story, it's with poor execution ... and to an audience of one.

Clive Owen, a terrific actor who has mastered vulnerable vengefulness, plays a fiercely protective father who cares deeply for his daughter Mia (Purnell). His devotion is so pure, in fact, that when she comes to him with nightmares, he builds a life-sized bogeyman out of toolshed supplies and then burns the creature, as if it's the Wicker Man. It's a rather extreme response, and one grisly enough in its imagery to create more nightmares than it destroys. Sure enough, it isn't long before the effigy turns up in Mia's bedroom.

Meanwhile, across the Atlantic, a young Spanish boy named Juan (Izan Corchero) is being terrorized by the same demon, whose name we learn is Hollowface, on account of its lacking any recognizable facial characteristics beyond bone structure. Hollowface, it will turn out, wants to claim the kids' visages for himself.

Intruders is a strange, uneven film — not quite horror, not quite psychodrama, not quite Babel-style globetrotter. Though it's a co-production between Britain and Spain, the English-language story owns the lion's share of the run time, and many of the Spanish scenes drag like dead weight. (A priest enters the playing field in Iberia but serves little discernible function.) Little happens in the first act, and most of what transpires in the second will be contradicted by the events of the third. Doesn't leave much of a net sum. 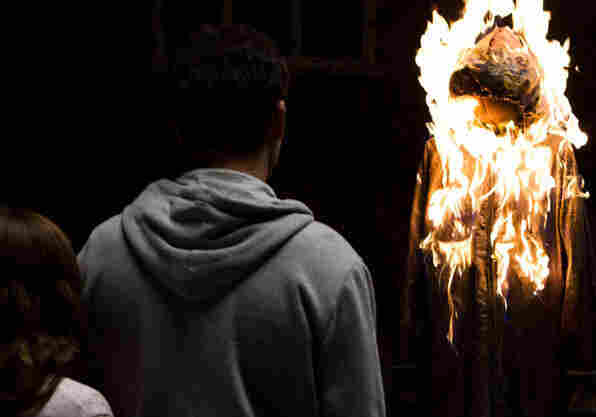 To show Mia her nightmares can't hurt her, John makes and burns an effigy of the bogeyman. Millennium Entertainment hide caption

The movie is also paced gastropodically, with a clunkily oblique script by Nicolas Casariego and Jamie Marques, who haven't found a graceful way to flip between the two plotlines. Director Juan Carlos Fresnadillo compensates for endless sequences of uneventful buildup with many close-ups of uncertain individuals accompanied by a soundtrack of screeching strings. (The most valuable player in Intruders isn't Owen, or Fresnadillo — it's the principal violist.)

Yet Intruders still builds a spooky atmosphere by hinting at the real-world nightmares that fuel its beast. Uncomfortably close child-parent relationships reveal some Oedipal undertones — Mia walks in on her parents having sex on the night of her first nightmare; Juan has an almost psychic hold over his single mother (Pilar Lopez de Ayala). Then there's the ever-present fear of growing up: a melancholic birthday party, a chucking aside of teddy bears. In a nice touch, it's never clear whether Mia or her dad is more terrified at the prospect of her getting older.

But these wisps aren't elaborated upon in a way that satisfies or provokes. When the admittedly clever twist appears, it manages to further cloud the picture. Far from carving its way into new nightmares, Intruders is bland enough to put old ones to rest.