Accessibility links
Merle Travis: A Traditional Ballad's 'Ever-Loving Light' Travis' rendition of the traditional ballad "Midnight Special" is one of the greatest gems from the Old Town School of Folk Music's treasure trove. 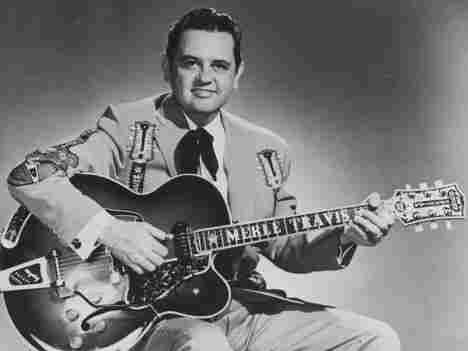 Merle Travis' rendition of the traditional ballad "Midnight Special" is one of the greatest gems from the Old Town School of Folk Music's treasure trove. Courtesy of the artist hide caption

Various versions of the traditional ballad "Midnight Special" track a train that ran on the Illinois Central line from Mississippi to Chicago — an apt allegory for much of 20th-century American folk music, traced in the long path of "Midnight Special" from Deep South musical pre-history to the singularly personal rendition by late country crooner Merle Travis. The song has been covered by everyone from ABBA to Van Morrison, with notable incarnations in the oeuvres of Leadbelly and Creedence Clearwater Revival. In that light, the immortal and polysemous title line — "Let the Midnight Special shine its ever-lovin' light on me" — takes on yet another sense for the hundreds of artists and audiences who have basked in the song's ever-loving light.

The provenance of this performance mimics the metaphor: Recorded on the storied South Side of Chicago in the thick of the blues-folk revival of the 1960s, the tape made its way up to the North Side of the city, into the archives of the Old Town School of Folk Music. The Old Town School's own sprawling and storied history bears mentioning: Conceived in a suburban living room before setting up in its eponymous neighborhood, it ultimately moved to Chicago's cool and quaint Lincoln Avenue axis and played host over the years to a veritable American roots-music hall of fame.

A few of the highlights from Live From the Old Town School, a massive release of 127 songs from the archives of the school's half-century of history include performances by Taj Mahal, Mahalia Jackson, Joan Baez, Odetta, Pete Seeger and Big Bill Broonzy. But Merle Travis' rendition is one of the collection's greatest gems — a true joy, a time capsule, a teaching piece and a master class in the "Travis picking" style of guitar still taught at the Old Town School today.

Photo Caption: Merle Travis' rendition of the traditional ballad "Midnight Special" is one of the greatest gems from the Old Town School of Folk Music's treasure trove.