Accessibility links
New Evidence In High-Profile Shaken Baby Case Shirley Ree Smith, who was convicted of killing her 7-week-old grandson, faces a return to prison. But an investigation by NPR, ProPublica and PBS Frontline has found documents that raise new questions about the autopsy that sent her there. 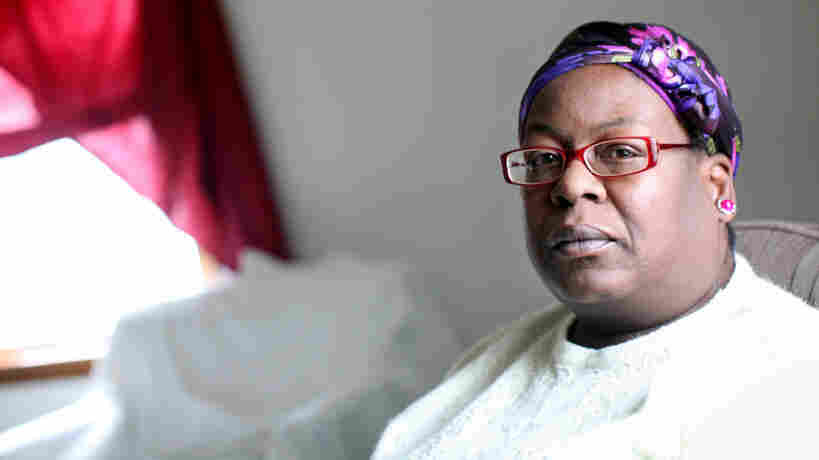 Shirley Ree Smith sits in the living room of her daughter's upstairs duplex in Alexandria, Minn. Smith is waiting to hear if California Gov. Jerry Brown will grant her clemency. "They say things happen for a reason. I'm not sure if I'll ever figure out a reason for all of this," she says. Courtney Perry for NPR hide caption

A senior pathologist in the Los Angeles County coroner's office has sharply questioned the forensic evidence used to convict a 51-year-old woman of shaking her 7-week-old grandson to death, identifying a host of flaws in the case.

This story reported by Joseph Shapiro of NPR, and ProPublica's A.C. Thompson is a continuation of NPR's joint coverage with ProPublica and PBS Frontline examining flawed autopsies and death investigations.

The new report by the pathologist, James Ribe, details eight "diagnostic problems" with the coroner's 1996 ruling that the child had died from violent shaking or a forceful blow to the head. Ribe wrote that he saw little evidence that the infant had been attacked, noting "the complete absence of bodily trauma, such as face trauma, grab marks, bruises, rib fractures or neck trauma."

Shirley Ree Smith was convicted of felony child endangerment — a charge equivalent to second degree murder --­ in the case, and she's garnered national attention over the course of a long legal campaign to clear her name. Smith insists that she never harmed the infant, Etzel Glass, who died in an apartment in Van Nuys, Calif.

After watching her legal appeals bounce from court to court for the past 15 years, Smith is currently out of custody, but is facing a possible return to state prison. She has petitioned California Gov. Jerry Brown for clemency, asking him to commute her sentence.

Ribe's review, which reveals a deep divide within the Los Angeles County Department of Coroner, could influence the governor's decision. Other doctors in the office reassessed the case and stood by the homicide ruling.

Los Angeles prosecutors constructed the case against Smith largely on the findings of medical experts working for the county coroner. During an autopsy, forensic pathologists discovered a small amount of bleeding on the infant's brain and in his optic nerves. They concluded the death was a homicide.

Documents obtained by ProPublica, NPR and PBS Frontline show the coroner's office in January asked several staff doctors to take a second look at Glass' death. As part of that effort, Ribe examined the autopsy report, tissue slides and other forensic evidence.

In Ribe's view, the injuries to the child's brain were relatively minor and could have been caused by the birth process. He also noted the baby's lungs were speckled with tiny blood spots called petechiae, which are often linked to sudden infant death syndrome and suffocation, and pointed out that Glass had been sleeping face down on an "unsafe sleep surface" — a couch cushion — on the night of his death.

Smith's advocates said Ribe's review strikes at the foundation of the case against her.

"This case wouldn't go to trial today," said Michael Brennan, a law professor at the University of Southern California and one of Smith's attorneys. "I am confident that the DA's office would never try this case again."

Conflict In The Coroner's Office

Eugene Carpenter, who supervised the original autopsy, remains certain that Glass' death was a homicide. As part of the recent review, Carpenter went through autopsy case files again. He stood by his original assessment, stating that Glass died as a result of abuse.

"Death is not due to natural causes and certainly not due to sudden infant death syndrome," Carpenter wrote in his report. "There is no reasonable doubt as to the cause of death."

Lakshmanan Sathyavagiswaran, the chief medical examiner-coroner, largely concurred, writing that the baby was the victim of abuse that injured his brain and may also have been intentionally suffocated.

The coroner's office would not address the conflicting views about the case.

"The cause and manner of death of any person is an opinion, and those opinions are based on multiple criteria," Craig Harvey, the chief investigator and head of operations for the agency, wrote in an email. "The Department of Coroner will not be making any further comment on this case."

Los Angeles District Attorney Steve Cooley recently sent a letter to the governor saying medical evidence presented during Smith's trial was valid. Granting her clemency due to concerns about the soundness of that evidence, Cooley wrote, would have a "chilling effect," making it more difficult to prosecute child abusers.

Sandi Gibbons, Cooley's spokeswoman, declined to comment on the case, as did the governor.

On the night of Glass' death, Smith says, she was sleeping on the floor as the baby and another grandchild slept on a nearby couch. Smith's daughter, Tomeka, and other family members were in the next room.

In a recent interview, Smith vehemently and tearfully denied ever hurting her grandson. "I didn't do it," she said. "There's no way I could possibly do that. Why would I do that? I mean why? Why would I shake him?"

In the decade and a half since Smith was convicted, much has changed in the world of forensics. The National Academy of Sciences in 2009 issued a lengthy report highlighting flaws in the country's coroner and medical examiner system and criticizing the techniques used in law enforcement crime labs.

Among doctors, there's an increasing awareness of ailments and conditions that can mimic the typical symptoms of child abuse — bleeding and bruising. The leading textbook on pediatric head injuries now includes two chapters on these mimics; they range from sickle cell anemia to congenital brain malformations to unintentional damage caused by the use of forceps or vacuums during birth.

Ribe's analysis notes that Glass' death doesn't fit the usual pattern for shaken baby syndrome cases, which are typically marked by a triad of symptoms: bleeding on the brain and in the retinas, and swelling of the brain.

Glass had only one of these symptoms — a tablespoon or two of blood, pooled on top of his brain.

But on the witness stand, Carpenter voiced a novel theory about the death, telling jurors that Glass was shaken or slammed so forcefully that his brainstem was fatally — but invisibly — damaged, shutting his whole body down instantly. "There is no evidence" of the brain stem injury, Carpenter testified, "and there is no evidence expected to be found in a shaken infant that dies quickly, because the body does not have time to react to the injury."

The jury convicted Smith of felony child endangerment and she spent the next decade dwelling in a California women's prison. "The hardest part of being locked up was knowing that I didn't belong there," Smith said, "and being away from my daughter and grandkids."

While Carpenter's testimony convinced the jury, it didn't sway the 9th U.S. Circuit Court of Appeals, which in 2006 overturned Smith's conviction. The court found "there was simply no demonstrable support for shaking as the cause of death." Smith's incarceration, added the court, had "very likely been a miscarriage of justice."

The ruling freed Smith from prison after 10 years. "I felt a sense of relief. I couldn't believe it was happening," she recalled.

But when the initial joy wore off, Smith had difficulty resuming her life in the free world. Her collision with the criminal justice system carried lingering psychological effects, leaving her feeling "lost" and fearful, she said. After a stint in a cheap hotel on Los Angeles' skid row and a bout of homelessness, Smith eventually moved to the Midwest, where Tomeka and her surviving grandchildren were living.

Her legal struggle, however, continued. The California attorney general appealed the case, and late last year, a divided U.S. Supreme Court reversed the 9th Circuit. "The Court of Appeals in this case substituted its judgment for that of a California jury on the question whether the prosecution's or the defense's expert witnesses more per­suasively explained the cause of a death," wrote the court in an unsigned opinion.

My mother never spanked me, she never cursed me, she never yelled at me. There's no possible way she could've done what they say. If I had any doubt about that, I would've wanted her prosecuted to the fullest extent of the law.

At the high court's direction, the 9th Circuit reinstated Smith's conviction in February of this year.

That move prompted Brennan and his co-counsel, Dennis Riordan, to petition Brown to commute Smith's sentence to the 10 years she has served, rather than returning her to a prison cell.

In a letter to the governor, the attorneys note that prosecutors recently asked pediatrician Carol Berkowitz to review the evidence. The doctor's report contradicts Carpenter's theory that Glass died nearly instantly after someone abused him — and highlights the lack of scientific consensus among medical experts when it comes to sudden infant fatalities.

Though Berkowitz believes Glass suffered head injuries due to abuse, she is uncertain about when the trauma occurred. "I think that one cannot say with medical certainty the precise time when these injuries were inflicted (e.g., whether immediate or within a specified number of hours)," wrote Berkowitz, a UCLA pediatrics professor and executive vice chair of the pediatrics department at Harbor-UCLA Medical Center.

Tomeka Smith is adamant that nobody abused her child. "Our family is so loving it's ridiculous," she said in an interview, adding that she has complete faith in her mother.

"My mother never spanked me, she never cursed me, she never yelled at me," Tomeka Smith recalled. "There's no possible way she could've done what they say. If I had any doubt about that, I would've wanted her prosecuted to the fullest extent of the law."

Today, Tomeka and Shirley Smith are living together in Alexandria, Minn., a quaint town of approximately 11,000 people located about midway between Fargo and Minneapolis. They share a small, tidy apartment with Tomeka's children, Marquis and Yondale, both teenagers. Tomeka's daughter, Yolanda, is attending college in Nevada.

On a recent afternoon, Shirley Smith greeted Yondale as he came home from school carrying a battered skateboard. She cooks for the boys, helps them with their homework, and generally keeps an eye out for them while Tomeka is away at work.

She knows the family reunion could end at any moment.

"I'm not free. ... I can't go anywhere without permission," Smith said. "They're trying to send me back to prison."

Updates To This Story