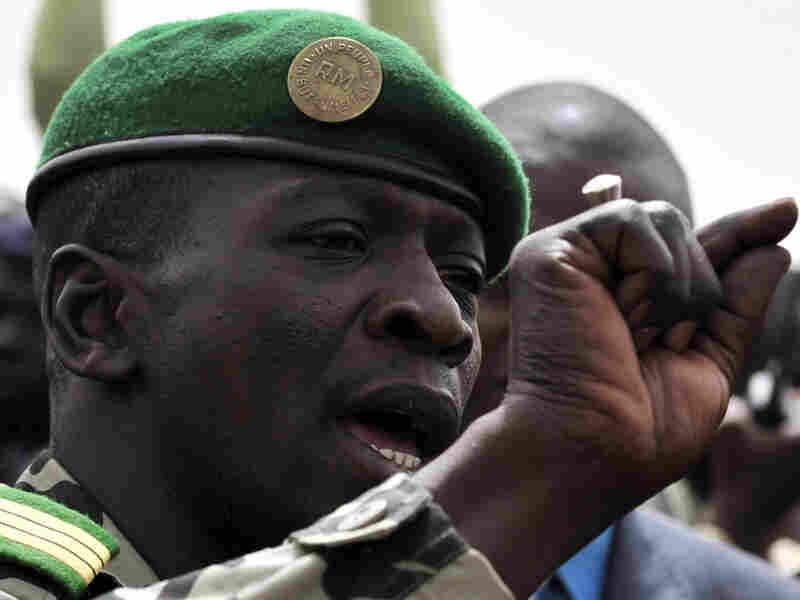 Malian military junta leader Amadou Sanogo speaks to supporters at Bamako airport on March 29, 2012 in Bamako. A bid by west African leaders to seek a return to democratic rule in Mali fell apart Thursday when the team turned back mid-air after a pro-coup demonstration in Bamako airport. Issouf Sanogo/AFP/Getty Images hide caption 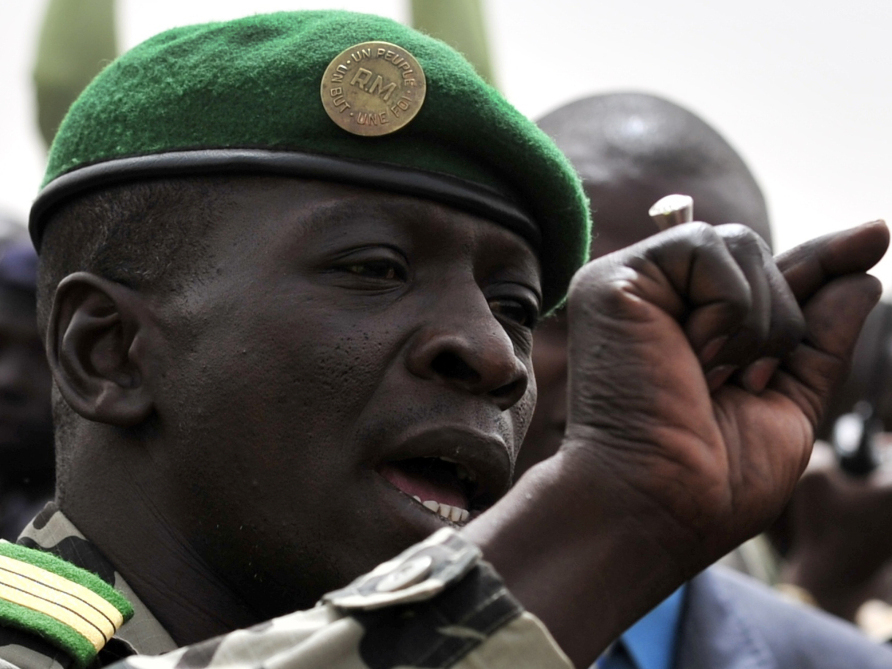 Malian military junta leader Amadou Sanogo speaks to supporters at Bamako airport on March 29, 2012 in Bamako. A bid by west African leaders to seek a return to democratic rule in Mali fell apart Thursday when the team turned back mid-air after a pro-coup demonstration in Bamako airport.

Training: U.S. military officials have acknowledged that Sanogo "participated in several U.S.-funded International Military Education and Training (IMET) programs in the United States, including basic officer training," though it's not yet clear which courses he took. He has affirmed receiving U.S. training in several interviews, but has declined to elaborate. Until this month's events, the United States allocated $600,000 per year for military training in Mali as part of an effort to combat Al Qaeda in the Islamic Maghreb.

Back home: On March 22, Capt. Sanogo and a renegade group of officers calling themselves the National Committee for the Reestablishment of Democracy and the Restoration of the State overthrew the government of President Amadou Toumani Touré. (Touré himself first took power in a 1991 coup but quickly handed over the presidency to a civilian government and was then elected a decade later.) The soldiers felt they were insufficiently supported in their fight against Tuareg rebels in the country's north. The junta has dissolved the country's governing institutions and closed its borders while several key international organizations have suspended Mali's membership. The United States has denounced the coup and cut off military aid.

Although Sanogo's supporters are already referring to him as le président, he has vowed that he will not cling to power and will quickly turn over his office to a civilian government, though this is a bit odd given that an election was already scheduled for next month.

Trained: Jammeh, then a captain, attended a military police training course at Fort McClellan, Alabama, in 1994.

Back home: Only 29 years old and just returned from his training in Alabama, Jammeh and four other junior officers led a bloodless coup in 1994, overthrowing longtime democratically elected president Dawda Jawara. Jammeh promised that his would be a "coup with a difference" and that he would stand down "as soon as we have set things right." Eighteen years later, he is still in power.

In addition to brutal crackdowns on the opposition and the press, Jammeh has become known for his eccentricities, including promoting a banana-and-herb cure for AIDS and rounding up those suspected of sorcery. After he was re-elected in 2011 to a fourth term in a widely criticized election, His Excellency the President Sheik Professor Alhaji Doctor Yahya Jammeh, as he calls himself, told his critics they could "go to hell" and vowed to rule for a billion years.

Trained: Biamby received infantry training at Fort Benning, Georgia, in 1980 and 1985. Francois received small-arms and ammunition repair training at the Army Odrnance School in Aberdeen, Maryland, and the Savanna Army Depot in Illinois in 1983.

Back home: In 1991, Biamby, the Army chief of staff, and Francois, chief of the national police, led a coup along with Army Gen. Raoul Cedras to overthrow President Jean-Bertrand Aristide, installing Cedras as leader of the country. (It is also frequently reported that Cedras received trainingin the United States though the Pentagon claimed at the time to be unable to find any record of him training.)

Cedras's three years of rule were characterized by human rights abuses, including the murder of hundreds of Arisitide supporters by Francois's death squads and a massive increase in cocaine smuggling, reportedly organized by the police chief. But, under international pressure, the regime stepped down in 1994 and allowed Aristide to return to power. Cedras was reportedly given a million-dollar "golden parachute" by the U.S. government to convince him to leave. Both he and Biamby are reportedly living in Panama. Francois was arrested in Honduras in 1997 and held on drug charges for several months but then released after a court denied a U.S. extradition request. His current whereabouts are unknown.

Aristide was again overthrown in 2004, this time by rebel leader Guy Phillipe, who had also reportedly received training by U.S. Special Forces.

Training: According to the advocacy group SOAWatch, Vasquez took a combat arms training course at the School of the Americas (SOA) in 1976 and another on small unit training in 1984. The SOA was a controversial U.S. military training program for Latin American military officers, a number of whom went on to be implicated in human rights abuses or military coups. The school was officially closed in 2000 but critics allege that similar training is taking place under the auspices of the Western Hemisphere Institute for Security Cooperation based in Ft. Benning, Georgia.

Back Home: Honduras's constitutional crisis of 2009 began when then President Manuel Zelaya ordered Vasquez, then commander of the Honduran armed forces, to help administer a referendum that would have allowed him to run for reelection. Vasquez refused, believing the referendum to be illegal, and was dismissed by the president.

As Zelaya moved ahead with the referendum, Vasquez and his allies supervised a plan to seize the ballots around the country, arrest the president, and remove him from the country. Elections were held several months later and Vasquez was named head of Honduras's government-owned telecoms company in 2010. He has suggested he may run for president in 2013.