Accessibility links
Movie Review - 'Bully' - A Provocative And Essential Documentary Bully, being released without a rating, takes a hard look at public-school students being cruelly targeted by their peers. NPR's Bob Mondello says the wrenching, intensely moral, potentially transformative documentary deserves to be seen by students, teachers, and parents. (Recommended) 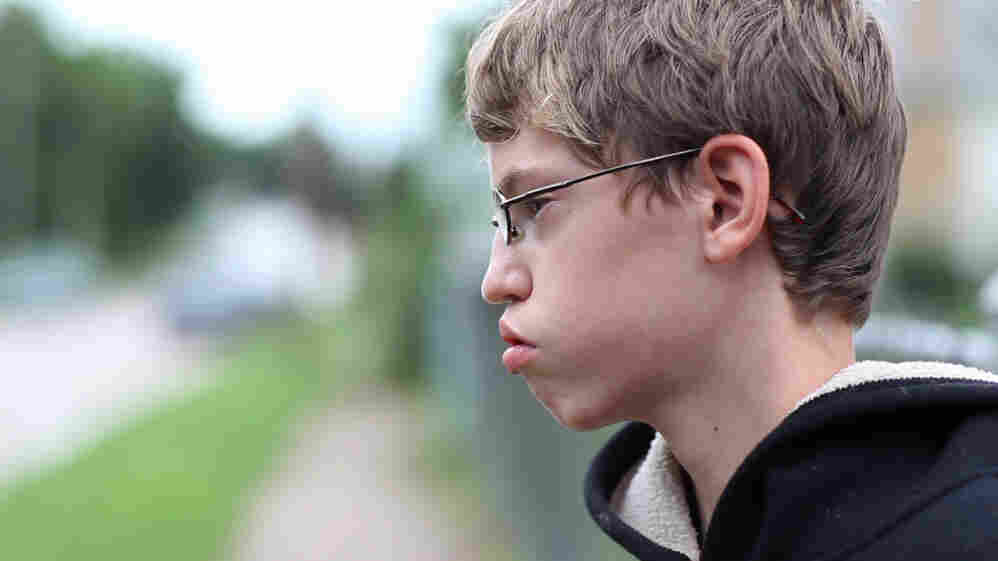 Alex, one of the kids who struggles with bullies in Lee Hirsch's documentary Bully. Weinstein Co. hide caption

For the second time in two weeks, a film that concerns itself with kid-on-kid violence arrives at the multiplex amid a firestorm of audience-generated, studio-fanned social-media interest.

Last week, The Hunger Games rode enthusiasm for Suzanne Collins' young-adult novels and a carefully orchestrated PR campaign to the best opening weekend of the year. Now comes the documentary Bully, director Lee Hirsch's sensitive look at anguished kids who've been cruelly targeted by their peers — which isn't going to do anything remotely like that kind of box-office.

Still, a dispute between its distributor, The Weinstein Co., and the Motion Picture Association of America's ratings board — more about the latter in a moment — has at least raised awareness of the picture. In fact, an online petition asking the MPAA to reconsider its rating generated more than 450,000 signatures, which suggests that someone will show up wherever the picture is actually able to get play dates.

That's a good thing: Bully is a wrenching, potentially transformative look at an epidemic of adolescent cruelty and adult paralysis in the nation's public schools.

Bully weaves together five stories from different parts of America's heartland. Two are about the grieving families of boys who've committed suicide — a 17-year-old in Georgia, an 11-year-old in Oklahoma City. The rest are profiles of kids still toughing it out — a Mississippi teenager who has been jailed after pulling a gun on the kids who made her life a living hell, a lesbian Oklahoma high-schooler who is tormented not just by other students but by her teachers as well.

Then there's Alex, a sweet, smart 12-year-old who, having been born prematurely at 26 weeks, is now awkward enough to be singled out for taunting and worse. Every morning on his school bus in Sioux City, Iowa, he's jabbed with pencils, choked, punched and otherwise harassed. And oddly, the little sadists doing the jabbing, choking and punching don't seem to be at all concerned about the presence of a camera.

Nor do the adults who frequently mishandle altercations once they're made aware of them. Take the school administrator who, as students return from the playground, grabs two boys, one of whom has been tormenting the other, and tells them to resolve their conflict by shaking hands. When the victim refuses, saying he's been hit, tripped and otherwise bullied over a period of weeks, she more or less orders him to make nice with his tormentor — then dismisses the bully so she can lecture the victim on how refusing to shake hands is just as hurtful in its way as what the bully has been doing.

The temptation to scream "No it's f- - -ing not!" at the screen will be considerable for many viewers. And why not? The MPAA, citing six "f- - -s" in the film, refused to give it a rating that would allow any of the children who appear onscreen to buy a ticket.

The upshot? Bully is now being released unrated, which means theaters won't be required to keep those under 17 from attending unsupervised, but also means that theater-chain policies and landlord lease clauses will prevent the picture from opening at all in many areas outside major cities.

The film is not without its issues. The filmmakers understandably concentrated on the stories of the victims, but that means we don't get a real handle on what's turned the bullies so toxic. The five kids profiled here are all from rural school districts in the middle of the country, and they're mostly white — one is African-American — which narrows the film's focus unduly. It's not as if urban school districts and Hispanic and Asian kids on the coasts don't also face problems.

Still, Bully is a wrenching, intensely moral film, and so potentially useful to children who are either being bullied, or doing the bullying, that the MPAA's Victorian prudery about a few instances of schoolyard language can't help but seem boneheaded.

The Weinstein Co. is justifiably making hay of the fact that The Hunger Games, in which children are depicted as actually killing children for sport, earned a PG-13, while this serious, sensitive and valuable documentary was denied that rating. All I can add to the discussion is the fervent hope that any parents, teachers, administrators or students who see it will immediately start clamoring for it to be shown at their next PTA meeting. (Recommended)