Accessibility links
Lone Star State Of Mind: Could Texas Go It Alone? They say it's like a whole other country, but in 1836 it really was one. Now, 167 years after Texas achieved statehood, NPR is re-liberating the Longhorn State. From big-hair foreign policy to laissez-faire economics, this is what a modern Republic of Texas might look like. 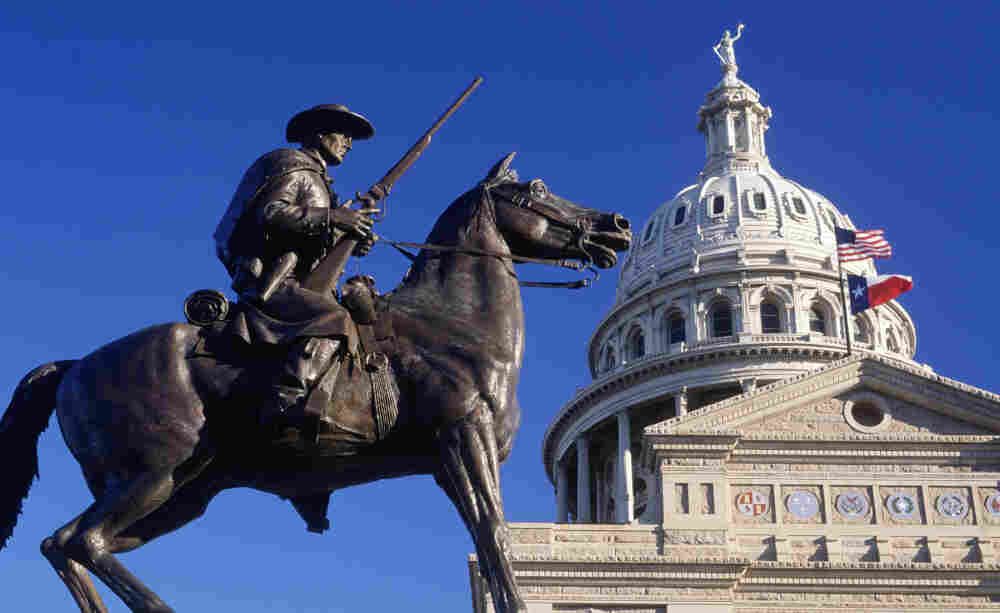 Lone Star Nation: Today, the Texas capitol flies both the American and Texas flags, but after independence the Lone Star flag would fly on its own. Steve Dunwell/Getty Images hide caption

It's a popular idea in Texas that the Lone Star State — once an independent republic — could break away and go it alone. A few years ago, Texas Gov. Rick Perry hinted that if Washington didn't stop meddling in his state, independence might be an option. In his brief run for the White House, he insisted that nearly anything the feds do, the states — and Texas in particular — could do better.

So we're putting Perry's suggestions to the test — NPR is liberating Texas. We asked scholars, business leaders, diplomats, journalists and regular folk to help us imagine an independent Texas based on current issues before the state. (Though, to be clear, no one quoted here actually favors secession.)

We begin our exercise in Austin, capital of the new Republic of Texas, where the Independence Day party raged until dawn to the music of Austin's own Asleep at the Wheel. Lead singer Ray Benson announced to the crowd, "We have severed the ties with the United States of America. Texas is free!" and the masses roared in response.

The former state has reinvented itself as a sort of Lone Star Singapore, with low taxes, free trade and minimal regulation. It enters the community of nations as the world's 15th-largest economy, with vast oil and gas reserves, busy international ports, an independent power grid and a laissez-faire attitude about making money.

Texas Is 'Open For Business'

The Texas Association of Business advertises the new nation's economic potential with a radio ad that declares, "Texas: Now it is a whole other country — and it's open for business ... C'mon over. Be part of our vibrant free-market nation." 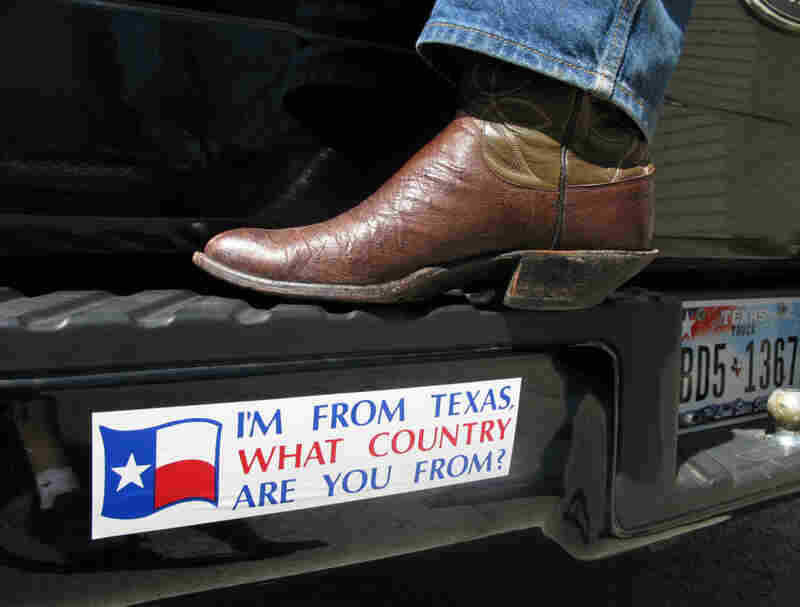 Driving around Texas, it's not uncommon to spot bumper stickers that tout the idea of an independent Longhorn nation. John Burnett/NPR hide caption 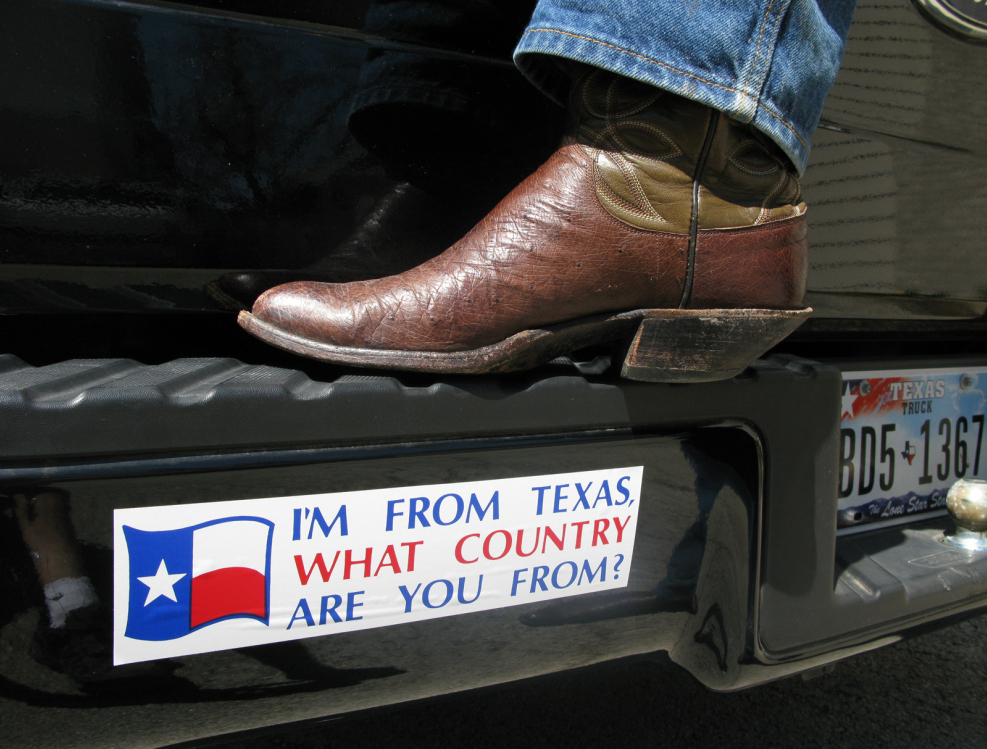 Driving around Texas, it's not uncommon to spot bumper stickers that tout the idea of an independent Longhorn nation.

"What we have been able to do since we threw off the yoke of the federal government is create a country that has the assets necessary to build an incredible empire," says Bill Hammond, the association's president.

Imagine airports without the Transportation Security Administration; gun sales without the Bureau of Alcohol, Tobacco, Firearms and Explosives; land development without the Endangered Species Act; new congressional districts without the Voting Rights Act; and a new guest-worker program without Washington gridlock over immigration reform.

"We now have a safe and secure guest-worker program that allows immigrants to come and go as the jobs ebb and flow, and fill the jobs that Texans are unwilling to do," Hammond says.

The new normal is a leaner government that bears little resemblance to the full-service nation it left behind. The Tea Party faithful who embraced nationhood early on say it's a lot better than being beholden to Chinese bankers.

"What is the Republic of Texas charged with actually doing? [It's] charged with defense, charged with education, charged with a few things that you have to do, and the rest is wide open," says Felicia Cravens, a high school drama teacher active in the Houston Tea Party movement. "Liberty may look like chaos, but to us it's a lot of choices."

Under statehood, the U.S. government contributed 60 percent of all Texas aid to the poor. In an independent republic, federal benefits like food stamps, free school lunches and unemployment compensation would disappear, according to two Dallas Tea Party leaders.

Liberty may look like chaos, but to us it's a lot of choices.

"The nation of Texas is a living experiment into what we call the empowerment society. It is no longer a caretaker society," says Ken Emanuelson, founder of the Grassroots Texans Network.

Texas Tea Party member Katrina Pierson adds, "There's a safety net that's always been out there. We don't have that anymore. You will be a productive member of society and our environment doesn't allow for people to not be productive."

Southern Methodist University political scientist Cal Jillson imagines that low-wage Texas would become a new magnet for assembly plants that might have considered setting up shop in Mexico or Malaysia.

"Since Texas has become independent, we are surprised — and some are pleased — to see that maquiladora [or foreign-owned] plants are springing up on the south side of the Red River and on the Sabine [River]," Jillson says. "The American South is complaining because some plants are moving to Texas."

With independence, the epic battles between the state of Texas and the Environmental Protection Agency would finally be over. The state sued the EPA repeatedly for telling Texas how to run its refineries and coal-fired power plants. Business experts say the new republic would rely on voluntary pollution controls with minimal oversight — a boon to the industrial sector. But how would that go over with residents of refinery towns who have to breathe the air where they live?

"I am very, very skeptical that the nation of Texas will do a good job at protecting the health and safety of the people, because the EPA is no longer in the equation," says Hilton Kelley, founder and director of the Community Empowerment and Development Association in Port Arthur. "It's all about petroleum; it's all about money."

'Peeling Back The Onion' Of Texan Independence

As an independent country, Texas's red granite capitol building would no longer fly the American flag, only the Lone Star. The new nationalism that breaks out inside the new government would soon be tempered by an independence hangover.

"Every day we're peeling back the onion and finding another level of complexity that I don't think anybody initially anticipated," says Harvey Kronberg, longtime editor and publisher of the Texas political newsletter Quorum Report.

According to Kronberg, a modern sovereign nation requires more — not less -- government than a state would. Consider all the new departments it would need to monitor things like foreign affairs, aviation and nuclear regulation. And then there are all the expenses Washington used to take care of — things like maintaining interstate highways, inspecting meat and checking passports.

"Reality is beginning to stagger the folks in the [capitol] building," Kronberg says.

Public education is a good example. In 2011, the Texas state Legislature slashed billions of dollars from school systems at a time when Texas was already 43rd among the states in per pupil spending and dead last in the number of adults who completed high school.

Steve Murdock, the former Texas state demographer and current director of the Hobby Center for the Study of Texas, expects that things would not improve under the budget of a struggling infant nation.

"For Texas to be the competitive nation that we would all wish it would be, it has to make major improvements in education," Murdock says, "because right now it's falling short."

Texas writer Joe Nick Patoski sits on a bench in downtown Austin, ruminating on the hassles of self-rule.

"You can't get in the car and go to New Orleans [and] be there in six hours anymore," he says. "Listen, have you been to the Louisiana checkpoint in Vinton? They're extracting some kind of revenge, the way they treat us as Third World citizens."

Patoski imagines losing a number of friends to the post-secession "Texodus," when U.S. citizens fled Texas for the Upper 48 states. He says he's rooting for the republic, but he's anxious for its future. 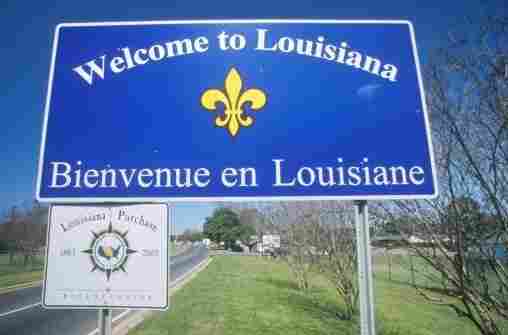 Today, all that marks the state line between Texas and Louisiana are welcome signs. After independence, those signs would most likely be replaced with the customs and immigration checkpoints that come with any border crossings. Getty Images hide caption 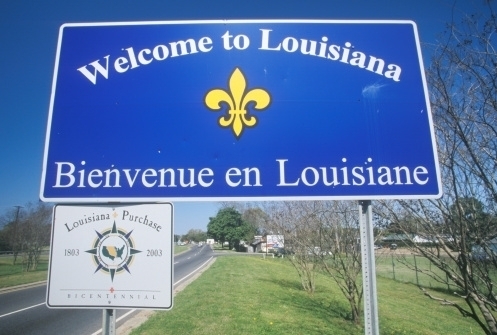 Today, all that marks the state line between Texas and Louisiana are welcome signs. After independence, those signs would most likely be replaced with the customs and immigration checkpoints that come with any border crossings.

"I'm still proud to be a Texan," he says, "but I wish they would've thought this through before they jumped and cut the cord."

During the state's first run as a republic, from 1836 to 1845, Texas established diplomatic relations with England, France, the Netherlands and the United States. Today, the modern nation of Texas would find even more countries eager to build embassies in Austin, says Carne Ross of Independent Diplomat, a New York firm that advises fledgling nations.

"Because of Texas' wealth — [it's the] 15th-largest economy in the world — [foreign nations] do not want to have bad relations with Texas," Ross says. "There are many countries, China for instance, that want to preserve their ability to access countries with major oil and gas reserves, so Texas fit into that."

Unlike the first republic, a modern nation of Texas needs to have positions on things like the Israeli-Palestinian conflict.

"But what was interesting was that Texas' positions were often quite different from the remaining United States," Ross says.

What would Texas's foreign policy entail? Country singer and humorist Kinky Friedman imagines what he would do as the Texas secretary of foreign affairs.

"I think the first thing we would do is go to the Third World countries and teach the women how to grow big hair and give the men Rick Perry wigs," he says. "I will keep us out of war with Oklahoma. And one of the first countries we'll open free trade with is Cuba. We will be opening cigar stores all over Texas. We're not supporting their economy; we're burning their fields."

Texas might see itself as culturally akin to its former fatherland, but as time goes on, the nation's destiny would be determined by its genetic ties to the south. If current demographic growth continues, Texas will become majority Hispanic within a generation. The prospect of Texas as the newest Latin American nation amuses Austin cultural marketing consultant Mando Rayo.

But would the U.S. let Texas go or would there be a constitutional standoff and opposition from the remaining united states? University of Texas, Austin, presidential scholar H.W. Brands doesn't anticipate a painful separation.

"The Texans were all set for a fight," he says. "I don't know, maybe they were a little bit surprised — maybe they were miffed — that much of the rest of the country said, 'Well we've had enough of the Texans, let 'em go. We'll be better off without 'em.' "

The premise of an independent Texas isn't actually all that popular in the Lone Star State. Last year, Public Policy Polling asked Texans if they favored secession, and fewer than 1 in 5 were for it. As for the 18 percent that said yes — they can just consider our simulation food for thought.