Accessibility links
James Cameron: Diving Deep, Dredging Up Titanic Filmmaker James Cameron has just returned from a successful submersible expedition to the deepest spot in the ocean — and he's also gearing up for the 3-D rerelease of his 1997 epic, Titanic. Cameron says that for him, filmmaking and exploring are two aspects of the same basic impulse. 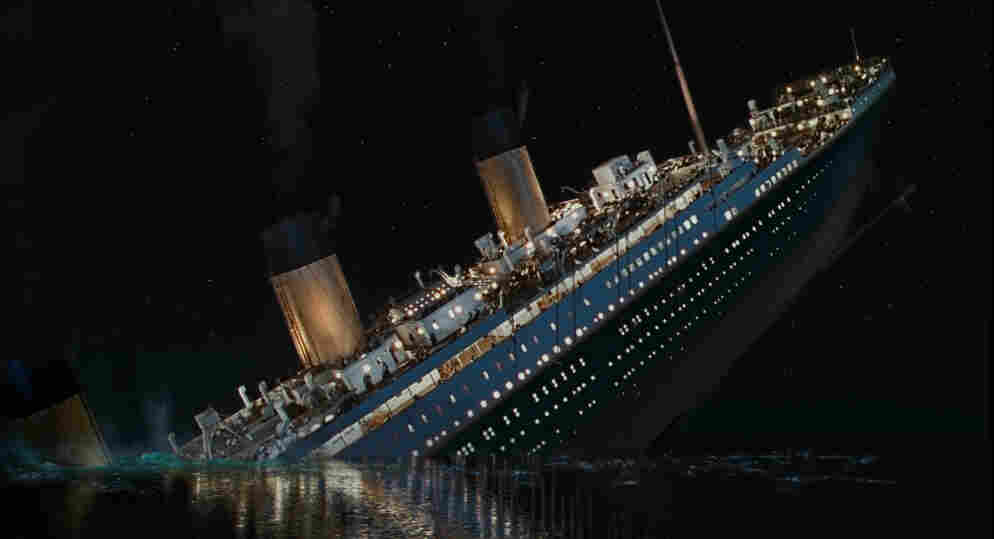 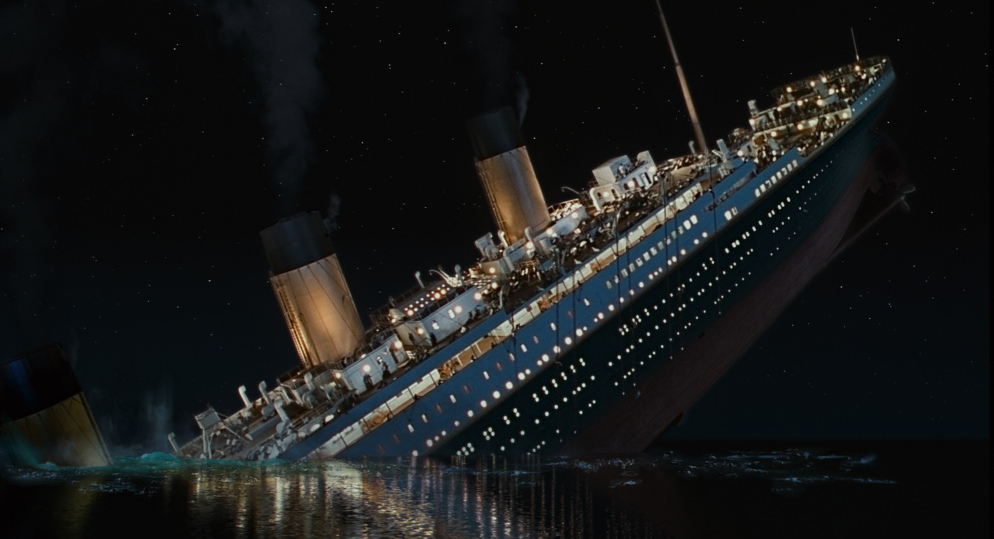 James Cameron's 1997 epic Titanic is being rereleased in 3-D.

Titanic is back. The 1997 blockbuster featuring star-crossed lovers Jack and Rose is being released in 3-D. Starring Kate Winslet and Leonardo DiCaprio, Titanic was the highest-grossing movie in history — until Avatar.

Both films were directed by James Cameron, who has just returned from a landmark expedition to the deepest point in the ocean: a spot in the far western Pacific called the Challenger Deep.

"They don't call it the Challenger Deep for nothing," Cameron tells NPR's Renee Montagne. "Because the idea is that if you can go to the deepest spot in the ocean, you can go anywhere in the ocean. There are so many of these extremely deep places that, together, form the last unexplored frontier on our planet."

Seven miles down in the ocean, Cameron says, you enter a world of darkness and extreme pressure, like "a train car sitting on your thumbnail. There was life down there," he adds, "but the overall impression when you get there is that this is as sterile and barren as the moon. And I never felt more apart from the world."

That darkness and loneliness can be transcendent, Cameron says, when you're experiencing something human beings have never seen before. "So there's a responsibility to bring that back, and tell that story ... and I don't mean this as a reference to my film, but to be a sort of an avatar, somebody that is the embodiment of human consciousness." 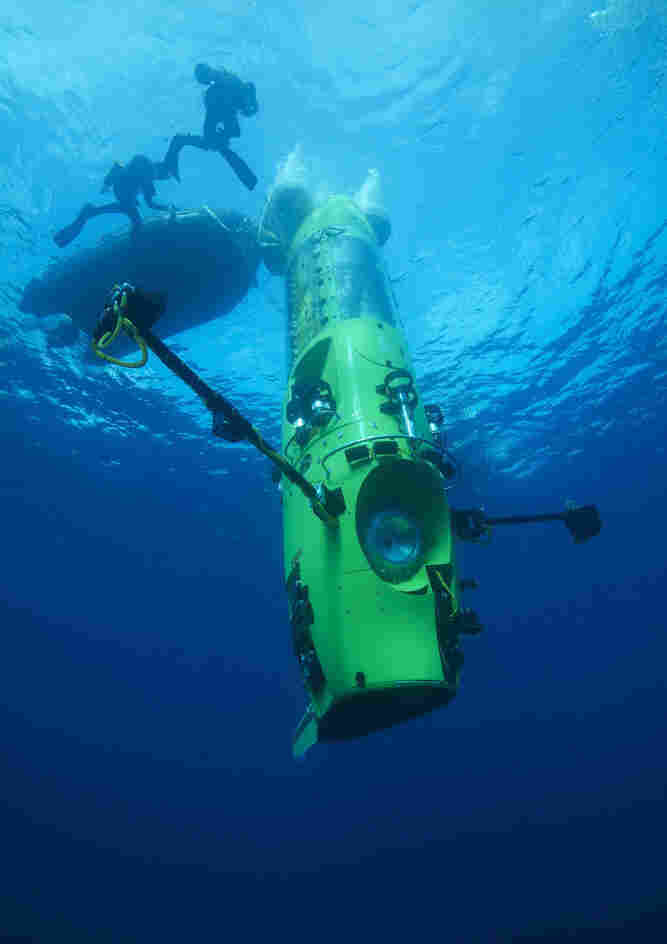 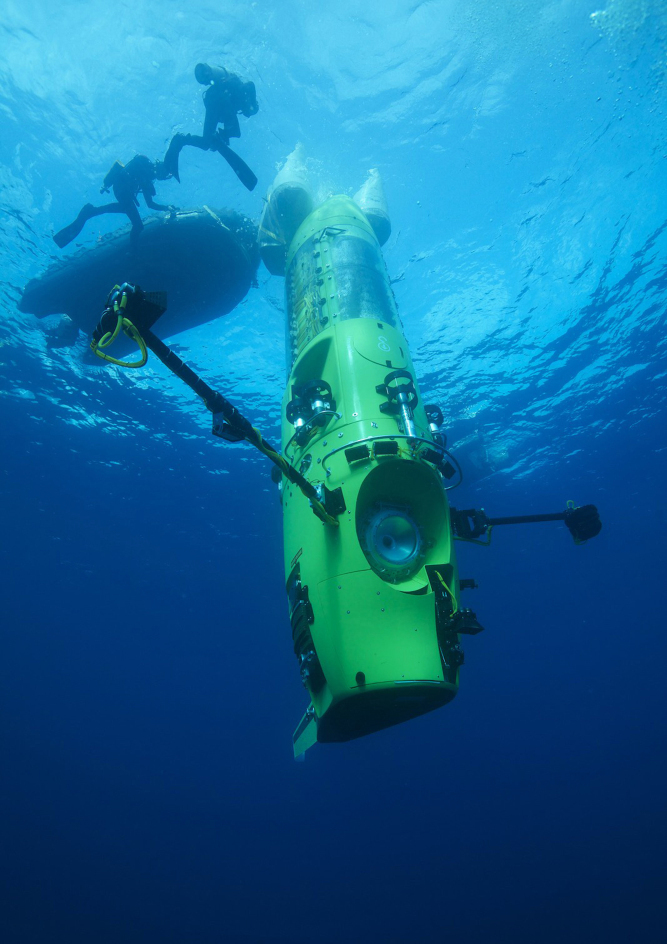 The Deepsea Challenger submersible begins its first test dive off the coast of Papua New Guinea.

And, of course, there's always the possibility that you might find aliens down there, the way explorers did in Cameron's early film The Abyss. "Well, I've seen plenty of aliens," he says, laughing. "I mean that metaphorically. I've done lots of deep dives, and I've seen stuff that I certainly never could have imagined, and there's something pretty amazing about that."

Cameron says that while Hollywood special effects can be jaw-dropping, it's almost impossible to be as creative as nature has been in adapting to extreme habitats like the Challenger Deep.

Cameron says he got the idea to make Titanic after being inspired by a real-life exploration of the famous wreck. "I sort of joke about this, but it's more true than not, that I made the movie because I wanted to do an expedition to the wreck of the Titanic, and I did explore it," he says.

While Cameron has criticized the conversion of 2-D movies into 3-D in the past, he says he has been planning the upgraded version of Titanic for years. "I always believed it could be done, and it could be done well," he says. But, he says, too many films were converted quickly, on the cheap. "When we converted Titanic to 3-D, it took us 60 weeks, $18 million, and 300 artists to do it right, and I was involved every step of the way."

And it was the smaller-scale scenes that were surprisingly effective in 3-D, Cameron says. "Rose running through the corridors trying to find Jack, as the water pours into this kind of maze that she's lost in," he says. "You feel the kind of claustrophobia, and her sense of, you know, rising desperation, I think, is really enhanced by the 3-D."

Cameron says he considers himself both an explorer and a filmmaker. "I think the through-line there is storytelling. I think it's the explorer's job to go and be at the remote edge of human experience and then come back and tell that story. So I don't see them as that separately."

Cameron films his expeditions, and he says that after life support, the technical system that most concerned him in the Deepsea Challenger was the filming equipment.

"If I see something amazing at the bottom of the ocean and I'm not able to shoot it and bring it back in 3-D, then it's a tree falling in the forest. So I see them as being two aspects of the same basic impulse," he says.