Accessibility links
French Killings Spark National Soul-Searching The killings of three Jewish children, a rabbi and three soldiers of North African descent by an Islamic extremist came during a presidential campaign in which immigration dominated election rhetoric. While some Muslims say they fear a backlash, and Jews have been shaken by the tragedy, there has also been an outpouring of outrage and solidarity. 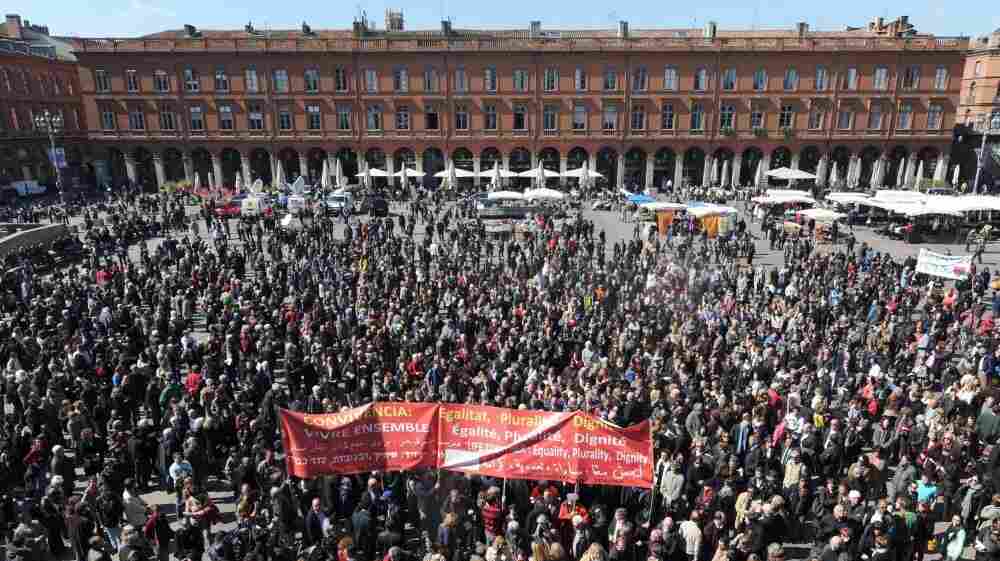 The killings in France of three Jewish children, a rabbi and three soldiers of North African descent came during a presidential campaign in which immigration has dominated campaign rhetoric. The Toulouse gunman, a Frenchman of Algerian descent, was shot dead by police, but the tragedy has prompted national soul-searching.

A week after the shootings outside a Jewish school in Toulouse, the actions of 23-year-old Islamic extremist Mohamed Merah dominates television debates and cafe conversations. Issues of security and immigration have replaced jobs and the economy on the campaign trail. Far right National Front Party candidate Marine Le Pen has unabashedly blurred the lines between terrorism and immigration as she toughens her rhetoric.

Now, some Muslims like Parisian Ben Cheri say they fear a backlash.

"You can't confuse an Islamist with a Muslim," he says. "God forbids the killing of innocents. We wholly condemn his crimes."

France has Western Europe's largest Muslim and Jewish communities. French Jews have also been shaken by the tragedy.

But there has been an outpouring of public outrage and solidarity. Silent marches in Paris and Toulouse led by rabbis and imams walking arm in arm attracted thousands of people. Some marchers carried signs in French, Hebrew and Arabic calling for "fraternite."

"It's important to see all the people out here together," says Marek Halter, a prominent French-Jewish writer. "The anger is so huge that people had to come out. France is together today."

French President Nicolas Sarkozy said French Muslims were clearly not responsible for the acts of a madman. He noted that Merah also targeted Muslim soldiers. He ridiculed Le Pen's parallel between the killer and immigration, pointing out that Merah was born and raised in France. Sarkozy has chosen to focus on security.

Stumping in a fiery speech over the weekend, Sarkozy told the crowd that opposition front-runner Francois Hollande had voted against French terrorism laws. He promised that if he were re-elected, tough new measures would go on the books. Sarkozy has proposed jail time for repeat visitors to websites preaching hatred, and for those who go abroad for what he calls extremist indoctrination.

"Talking about terrorism, jihad and violence is not a matter of discussing an opinion," he said. "These ideas should be forbidden on French soil, and we will fight them."

Hollande, the Socialist front-runner, asked how Merah could have obtained such an arsenal when handguns are illegal in France. He called Sarkozy's law-and-order record a failure. There have been questions about whether French intelligence missed clues about Merah early on. Still, commentators have praised Sarkozy's handling of the tragedy.

Standing next to the flag-draped coffins of the three soldiers at a funeral last week, Sarkozy appeared dignified and presidential. In a moving speech, he said the killer had not brought France to its knees as he intended.

Just two months ago, Sarkozy lagged well behind Hollande. Now polls show the two contenders neck and neck for the April 22 first-round vote in what is now one of the tightest presidential races many say they can remember.