Accessibility links
New Republic: The Winning Argument Verilli Forgot Jeffrey Rosen of The New Republic argues that had Solicitor General Verrilli noted that states providing guarantees attract the uninsured from other states, he may have made a better case that the commerce clause pertains to The Affordable Care Act. 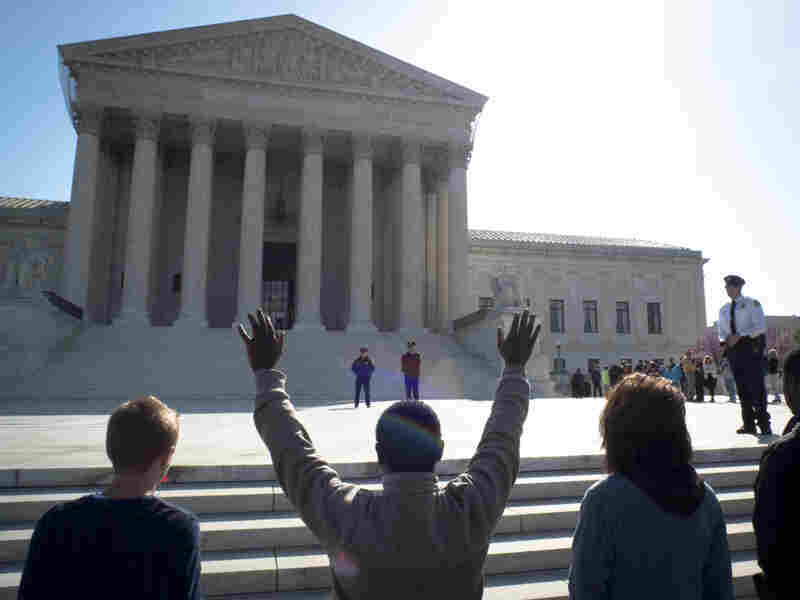 Anti-abortion protesters pray outside the U.S. Supreme Court on the third day of oral arguements over the constitutionality of the Patient Protection and Affordable Care Act on March 28, 2012 in Washington, D.C. Mladen Antonov/AFP/Getty Images hide caption 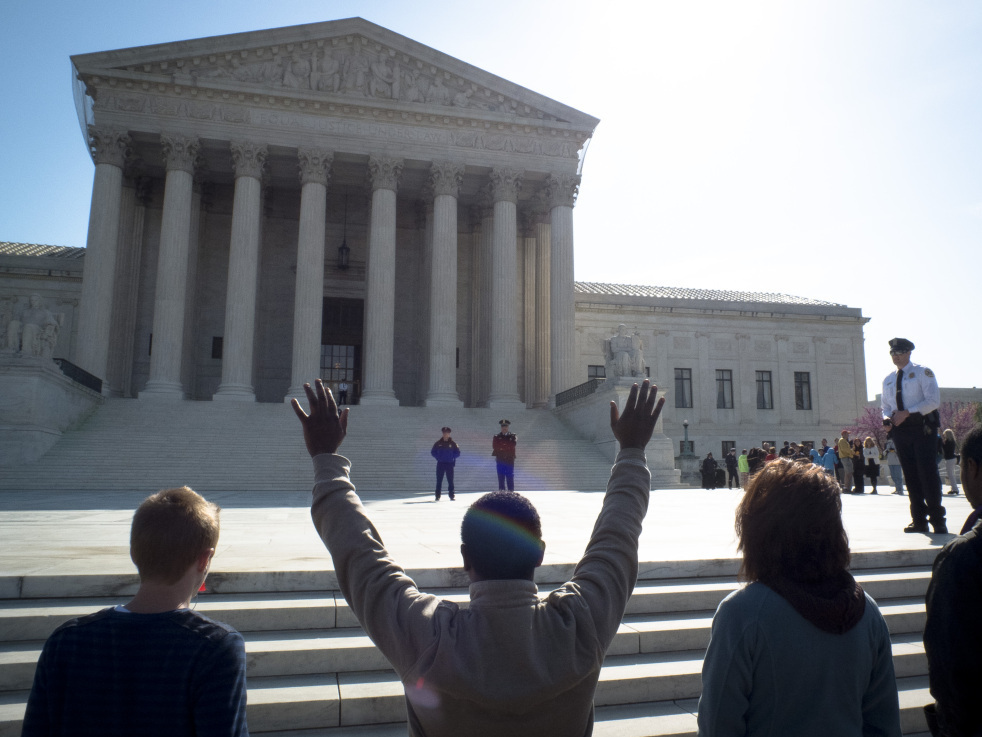 Anti-abortion protesters pray outside the U.S. Supreme Court on the third day of oral arguements over the constitutionality of the Patient Protection and Affordable Care Act on March 28, 2012 in Washington, D.C.

Jeffrey Rosen is the legal affairs editor of The New Republic.

In the oral arguments over the constitutionality of health care reform, John Roberts and Anthony Kennedy seemed at times to be looking for a reason to uphold the law despite their doubts. Unfortunately, Solicitor General Donald Verrilli didn't give it to them. Verrilli's error wasn't his nervous presentation — the sips of water and coughs followed by long silences now unfairly mocked by a Republican National Committee attack ad that plays the audio of his stammering over the headline "ObamaCare: It's a Tough Sell." Instead, Verrilli's error was substantive: He failed squarely to answer Roberts and Kennedy's repeated questions about what limits he envisioned to Congress's power to regulate interstate commerce. Verrilli's evasions weren't only unhelpful — they were also unnecessary.

Read More On Who Won The Arguments Before The Supreme Court On The Affordable Care Act, here and here.

There is, in fact, a persuasive limiting principle that would allow the Court to uphold health care without endorsing the unbounded federal power that concerns Kennedy and Roberts. It appeared in a Supreme Court brief filed by the government during the lower court proceedings in the eleventh circuit health care challenge that is now being reviewed by the Supreme Court. (Disclosure: the brief was filed by my brother in law, Neal Katyal, then the Acting Solicitor General.) The answer also appears in Supreme Court briefs filed by states including Maryland and California and by law professors including Barry Friedman and Matthew Adler. But it doesn't appear in the briefs for the United States that Verrilli filed before the Supreme Court — perhaps because he viewed it as too conservative in its attempt to persuade the conservative justices that the framers of the Constitution would have allowed the regulation of health care.

The limiting principle goes something like this: In previous cases denying Congress the power to regulate local activities such as guns in schools or violence against women, the Court has drawn a distinction between activity that is truly local and activity that is truly national, in the sense that the states aren't able effectively to regulate the activity on their own. When it comes to violence against women or guns in schools, states arguably have the will and the resources to respond to these problems.

But when it comes to providing insurance guarantees for the uninsured, any state would be worse off if it tried to solve the problem on its own, because it would end up attracting uninsured people from other states seeking to take advantage of its benefits. Because states know this in advance, most don't even try to solve the fundamental problems of health care coverage. Indeed, Representative McGovern of Massachusetts — the only state to pass a universal mandate — made a similar argument during the congressional debate over the Affordable Care Act when he said that a national mandate would free Massachusettes from being "forced to subsidize through higher premiums and higher Medicare and Medicaid costs the uncompensated care of people in other states who do not have health insurance."

The Supreme Court endorsed an argument along these lines when it upheld Social Security in 1937. In Helvering v. Davis, which should have been front and center during the health care oral arguments, Justice Benjamin Cardozo wrote that a state might have resisted providing broader benefits or coverage to its neighbors out of fear that it would become "a bait to the needy and dependent elsewhere, encouraging them to migrate and seek a haven of repose." For this reason, the Court viewed income for the elderly as a national problem that needed a national solution. In the same way, affordable health care — unlike guns in schools or violence against women, subjects traditionally regulated by state and local criminal law — is an essentially national problem.

In addition to having been endorsed by the Supreme Court in 1937, this principle is also deeply rooted in the original understanding of the Constitution. As Neil S. Siegel of Duke University argues in a forthcoming article about the health care mandate and original understanding, "the Commerce Clause is best understood in light of the collective action problems that the nation faced under the Articles of Confederation, when Congress lacked the power to regulate interstate commerce." Siegel argues that "to over-come failures to participate in collective action whose effects spill across state borders, the clauses of Article I, Section 8 authorize Congress to require various kinds of private action."

Conservative justices, who care about the text, history, and original understanding of the Constitution, might have been persuaded by this argument about how the framers wanted Congress to be able to regulate economic free riders. And it would have provided a convincing answer to their hypothetical questions about why the government can't regulate broccoli, or burials, or cell phones. Unlike affordable health care, the problems of providing healthy food, or burials, or emergency response are ones that a state can solve on its own without becoming a magnet to people from other states.

Of course, if the conservative justices were determined from the outset to strike down the health care mandate, an argument like this might not have made a difference. But at least some of the justices seemed to be struggling for an answer to the question of what the Obama administration views as the limits on Congress's power. Surely an answer rooted in constitutional text, history, and Supreme Court precedent would have been more effective than the answer the justices received.