Accessibility links
Here (And There, And Really Everywhere) Be Dragons As the supernatural enjoys a pop culture resurgence — from vampires to fairy tales — there's also been a firestorm of fascination with dragons, who appear this year in two movies, a new book, video games and a Washington, D.C. museum exhibit. Allison Keyes explores the mystical creatures' appeal. 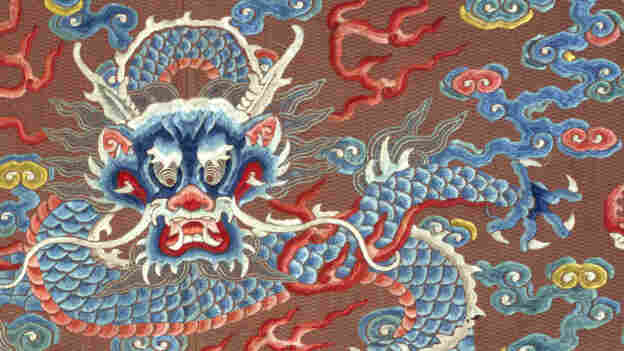 A close-up of a dragon robe, or long pao, dated late 18th- or early 19th-century China. It's one of many on display in the exhibit "Dragons, Nagas, and Creatures of the Deep" at the Textile Museum in Washington, D.C. Renee Comet/Textile Museum hide caption

As the supernatural enjoys a pop culture resurgence — from vampires to fairy tales — there's also been a firestorm of fascination with dragons. Fire-breathing dragons are central to the much-anticipated second season of the HBO series Game of Thrones, which opens April 1. And this year alone the mystical creatures are being featured in two movies, a new book, video games and a museum exhibit. 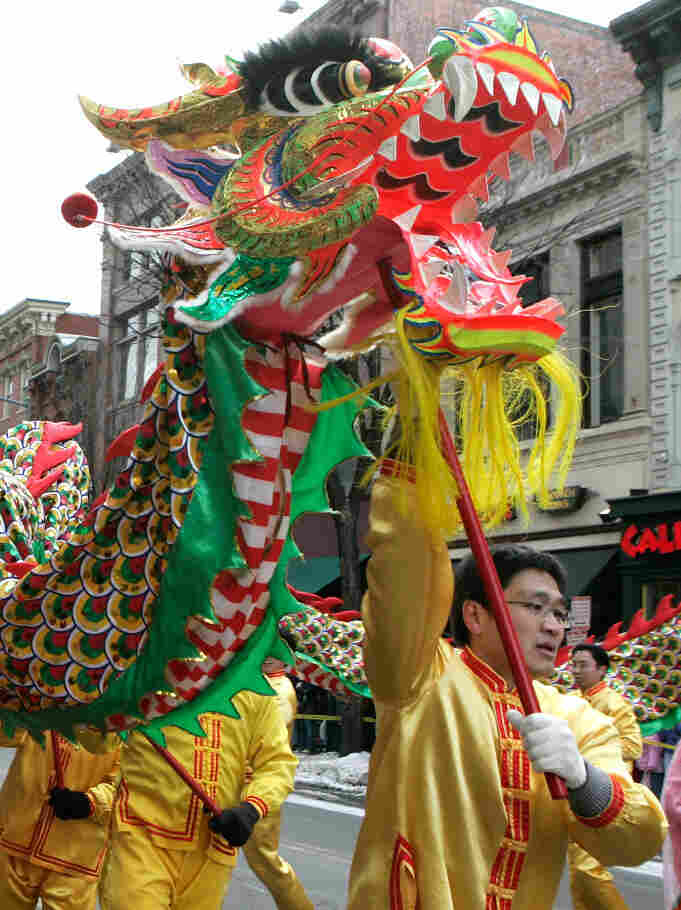 But then wasn't it always that way? Dragons are deeply entwined in the mythology of nations ranging from Egypt to South America, and in many Asian cultures, this is the year of the dragon.

At the Washington, D.C., parade marking the auspicious occasion, Jalen Ahmad is among the crowd of grinning people standing along the route. Watching the multihued dragons prance sinuously down the street, Ahmad says the year of the dragon is exciting — and significant in the Chinese zodiac.

"I feel like, for the dragon," Ahmad says, "it is very powerful, strong, courageous."

Six-year-old Micora DuBos, attending with her mom, thinks dragons are pretty but not very smart. But in fact, pop culture dragons run the gamut of personalities, which may be how they've wormed their way so deeply into our hearts. 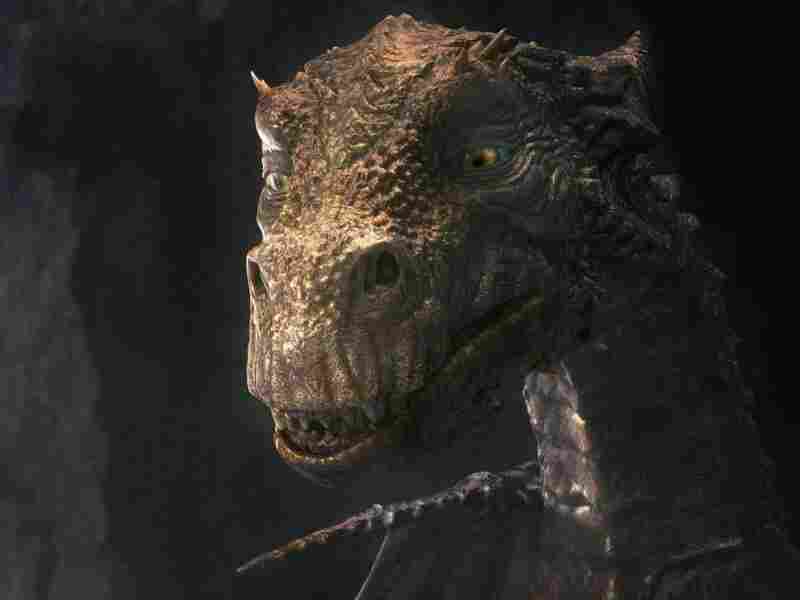 A thousand years old, the dragon Kilgharrah (voiced by veteran actor John Hurt) is both a boon and a bane to Camelot in the BBC series Merlin, which airs in the U.S. on SyFy. SyFy hide caption 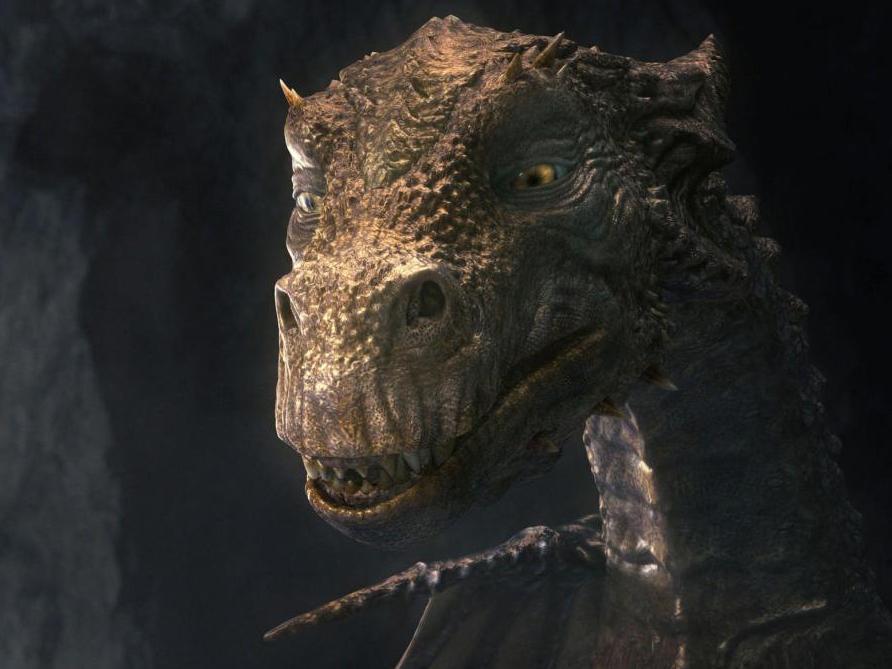 A thousand years old, the dragon Kilgharrah (voiced by veteran actor John Hurt) is both a boon and a bane to Camelot in the BBC series Merlin, which airs in the U.S. on SyFy.

As for a dragon's intelligence, none could be more cunning than the murderous, thieving Smaug from J.R.R. Tolkien's The Hobbit.

Actor John Hurt, who just won a lifetime achievement award at the BAFTAS, plays The Great Dragon on the BBC-TV series Merlin. His character, also called Kilgharrah, is a sly wyrm who's both friend and sometimes foe to King Arthur's magician-protector.

"I thought it would be great fun to play a dragon," Hurt says. He explains that Kilgharrah is an interesting character — who just happens to be a dragon — and an individual who cares for both Merlin and Camelot.

"He cares about the country ... in his own way, but he is a dragon, so therefore he can't be completely relied upon."

Hurt echoes scholars who believe one of the reasons dragons permeate cultures around the world is the presence of dinosaur fossils found all over the globe — fossils that, in the eras before paleontology, might have suggested what we think of as dragons. 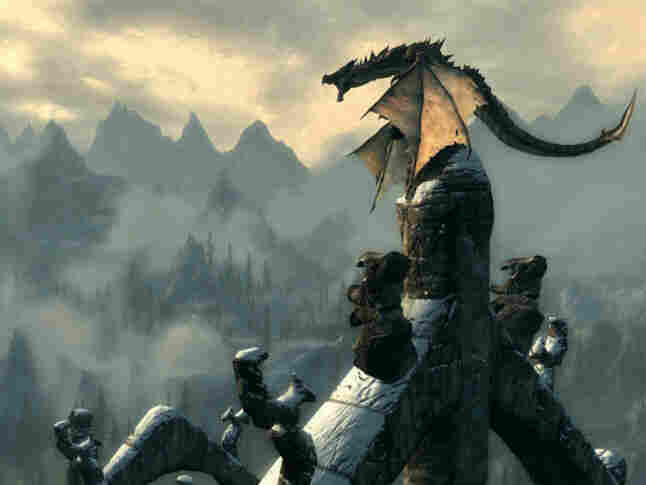 In the popular video game The Elder Scrolls V: Skyrim, the player fights ancient dragons and can learn their secrets in order to harness their powers. Bethesda Softworks hide caption

At the Textile Museum in Washington, D.C., Eastern Hemisphere Collections curator Lee Talbot notes that people around the world have told stories of these mythological creatures with supernatural powers for thousands of years.

The museum is currently running an exhibition called "Dragons, Nagas and Creatures of the Deep," in which the oldest piece is a tunic panel from fifth-century Egypt. On it is an ancestor of the modern dragon called a hippocamp — "a cross between a horse and a fish," Talbot says.

Talbot says that at around the same time, on the other side of the world, there was another legend about a dragon resembling a cross between a fish and a horse.

The exhibition includes an elaborate navy-blue gauze jacket from early 18th-century China adorned with fearsome-looking golden dragons with open mouths and four outstretched claws. Talbot says a fifth claw has been painstakingly removed from this garment — meaning it was adapted, at some point, for wear by someone outside the royal family.

"Only the emperor of China, his wife and immediate family were allowed to wear five-clawed dragons," Talbot says. 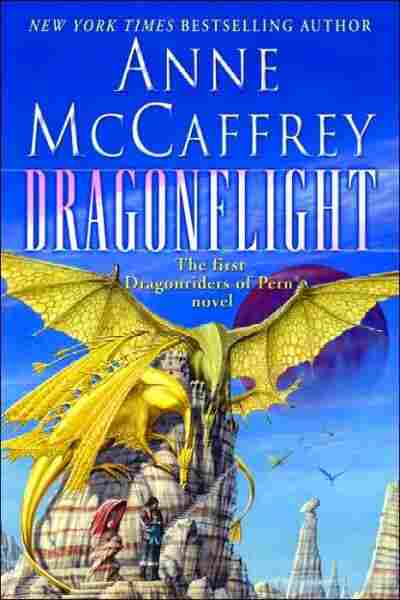 Dragonflight is the first book in the iconic Dragonriders of Pern series. Random House hide caption

In East Asia, dragons are symbols of power and protection, and are closely related to water and rainfall. By contrast, in Europe dragons were traditionally seen as dangerous. And in the Christian tradition, they're worse than that: Talbot says that in the stories of St. George and the dragon, the dragon symbolized evil and Satan, and the saint's combat with him symbolized Christianity battling paganism.

But that just covers the dragons on this planet. The extraterrestrial dragons in author Todd McCaffrey's world are beyond friendly. McCaffrey has another book coming out this year in the series his mother Anne began in 1967 — the iconic Dragonriders of Pern. He explains that the dragons in those books have a symbiotic relationship with humans. They bond, telepathically and intimately, with their riders.

"You didn't want something that big and that powerful," says McCaffrey, "not united with humans in a way that would allow [the humans] to survive."

And by big, McCaffrey means the size of a wide-bodied jet plane. But only the golden queen dragons on Pern, a planet colonized by humans, grow to be that size. Pern's dragons have head knobs like giraffes, multifaceted eyes, and skin rather like the hide of a horse.

But McCaffrey says he thinks the reason people are so fascinated by dragons goes way beyond their looks.

"I think dragons are a really fundamental embodiment of our wishes and dreams," McCaffrey says. They are incredibly powerful, he adds, and they embody the best of humans and their aspirations.

It's "kind of like the love of dinosaurs that little kids have — but now they can fly," McCaffrey marvels. "They breathe fire too. How much better can it get?"