Accessibility links
Art, Mystery And Posh Pigments In 'Sacre Bleu' Author Christopher Moore's new novel Sacre Bleu begins and ends with a meditation on the color blue — and in between sends the great artists of Belle Epoque Paris on a quest to discover the truth about the death of Vincent Van Gogh. 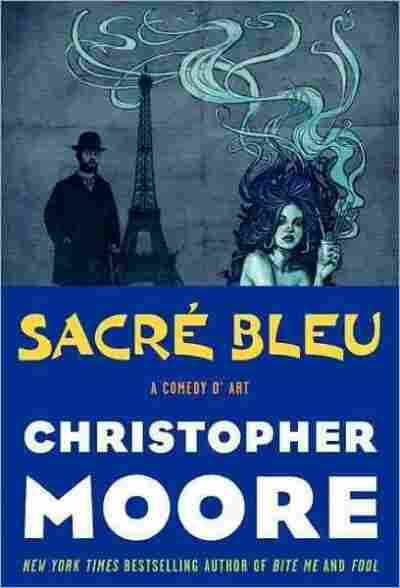 Novelist Christopher Moore says he isn't very good at giving elevator speeches — those quick pitches on your latest project that Hollywood screenwriters are so good at.

"[That's] one of the reasons I probably don't work in Hollywood," Moore tells NPR's Scott Simon. But if he had to give a brief rundown of his latest novel, Sacre Bleu: A Comedy d'Art, he says, "I'd talk about it being a book about the color blue, and about solving the murder of Vincent van Gogh and the sort of mystical quality of making art. And it's funny."

The narrative winds all around late 19th century Paris through artists' homes, cafes and brothels. But it begins and ends with a meditation on blue.

Early in the book, van Gogh shoots himself in a field in Auvers. This sets the novel's two main characters — Henri de Toulouse-Lautrec and a fictional baker and aspiring painter Lucien Lessard, eventually joined by some of the most noted artists of their time — on a quest to solve a multilayered mystery combining art, suicide and maybe murder.

"The murder mystery is what's compelling to Lucien and Henri," says Moore. "That relationship is, 'What happened to our friend?' He was getting better. He was at the height of his powers. And no one shoots himself in the abdomen in a cornfield in Auvers and walks a mile to the doctor for help. And it just didn't seem right. And gradually the circumstances of this rather mystical shade of blue starts to manifest in the story."

These days you can walk into any drugstore and buy a cheap pack of markers in all the colors of the rainbow. That makes it hard to appreciate just how rare and precious blue pigment was, not so long ago.

"The translation of sacre bleu is sacred blue," says Moore. "In medieval times, the church said that if you are going to portray the Virgin Mary's cloak, it has to be in a certain shade of blue. And that blue must be ultramarine, because ultramarine blue is permanent. It doesn't go black or fade as organic colors do. And that is made essentially from crushed lapis lazuli, which is only available in Afghanistan. If you think about the 11th and 12th century, trying to get a stone from Afghanistan to Europe, for years and right up into the 19th century, was more valuable, weight for weight, than gold." 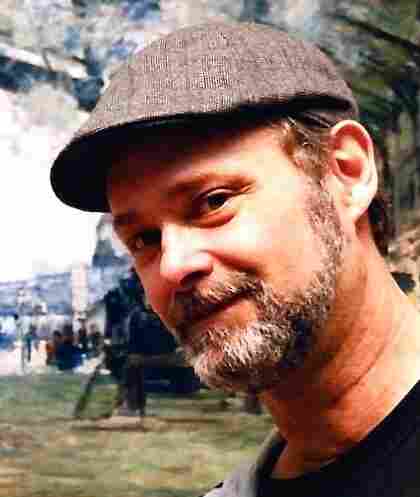 Christopher Moore is the author of A Dirty Job, Fool and Lamb: The Gospel According to Biff, Christ's Childhood Pal. Sacre Bleu is his 13th novel. Garry Kravit/HarperCollins hide caption 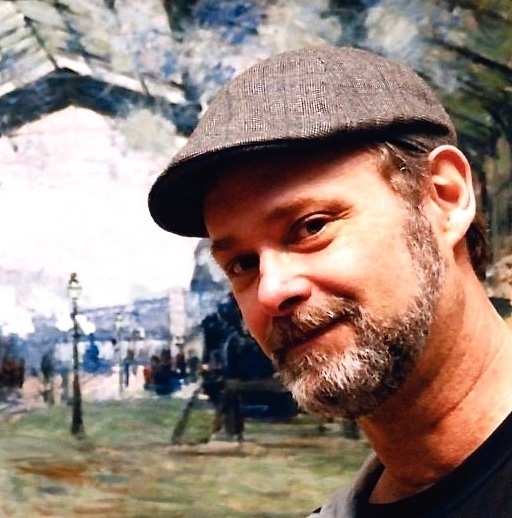 Christopher Moore is the author of A Dirty Job, Fool and Lamb: The Gospel According to Biff, Christ's Childhood Pal. Sacre Bleu is his 13th novel.

Moore's novel introduces readers to the bygone figure of the color man. The pigments that went into paint came from all over the world, and painters in Europe depended on these itinerant merchants to supply them with rare pigments from far-flung locations.

"We all think that Michelangelo and da Vinci all went out to the hills of Italy and dug ochres out of the hills. Some colors you just couldn't get. I mean, purple would come from snails off of Syria. And the cochineal beetles that came from what is now Hungary, they made red out of. And so a colorman provided these pigments. And they sort of had a route. They'd travel all over the world trading and collecting sometimes rare pigments and getting them to the people that could use them."

Moore says his novel dwells on the period of French painting beginning in 1863, when Manet unveiled his seminal painting, Le dejeuner sur l'herbe. "That sort of kicks off what we know as Impressionism," says Moore. "And it takes us up through 1891. Renoir had moved back to Paris in the 1890s when Toulouse-Lautrec was on Montmartre. And they knew him as 'the little gentleman' in those days."

Henri de Toulouse-Lautrec is one of Moore's most vivid characters. In researching the real Toulouse-Lautrec, Moore says that the painter's journals and letters proved strangely unhelpful — they were stilted, earnest accounts of his life written mostly to his relatives with the aim of getting a little money. "And at the same time we know from accounts of his friends that he was living for weeks at a time in brothels. So you just sort of have to put it together from what is written about him by his contemporaries," Moore says.

"I think that they are modeling themselves after this generation of revolutionaries that came before them," says Moore. "But I think that they're looking for some clue in what they will become, and Vincent sort of throws a wrench into their works."

Van Gogh's self-destructiveness disturbs their idea of how a revolutionary painter should be. But as they dig deeper into the past, they find that nearly every artist that they know has had a self-destructive streak.

"All of the ones that I account are actually based in reality, from James Whistler to Monet himself to Cezanne," says Moore. "I think that punctuates beyond wanting to find out what happened to their friend and this sort of mystical color blue that was involved in it. They are looking for some clue for what they will be."

Read an excerpt of Sacre Bleu