Accessibility links
To Keep Protesters Away, Egypt's Police Put Up Walls The barriers went up near the Interior Ministry in Cairo, turning vibrant neighborhoods into a maze of checkpoints. Some residents say the walls symbolize the divisions between the country's authorities and ordinary citizens. 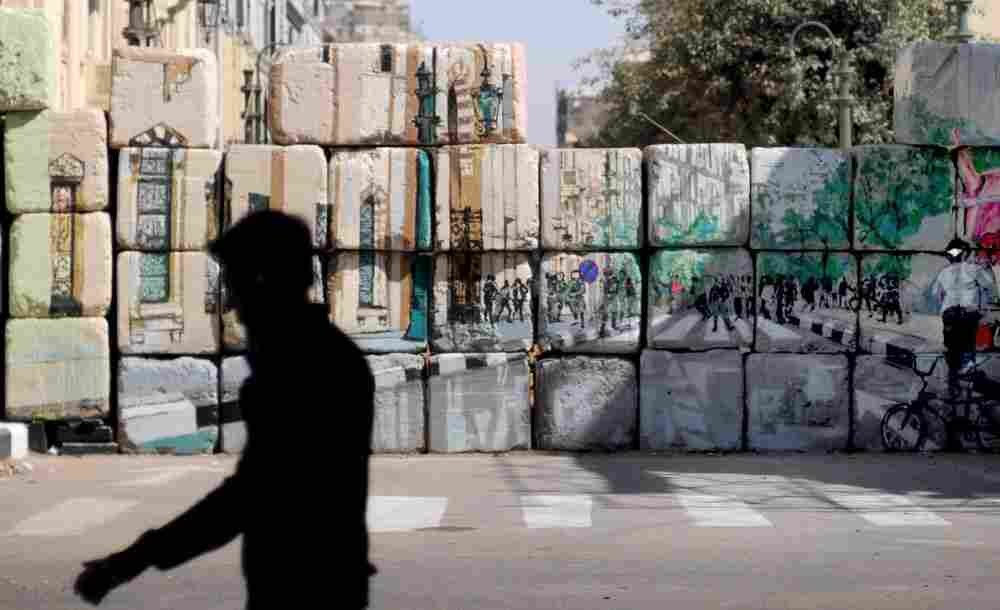 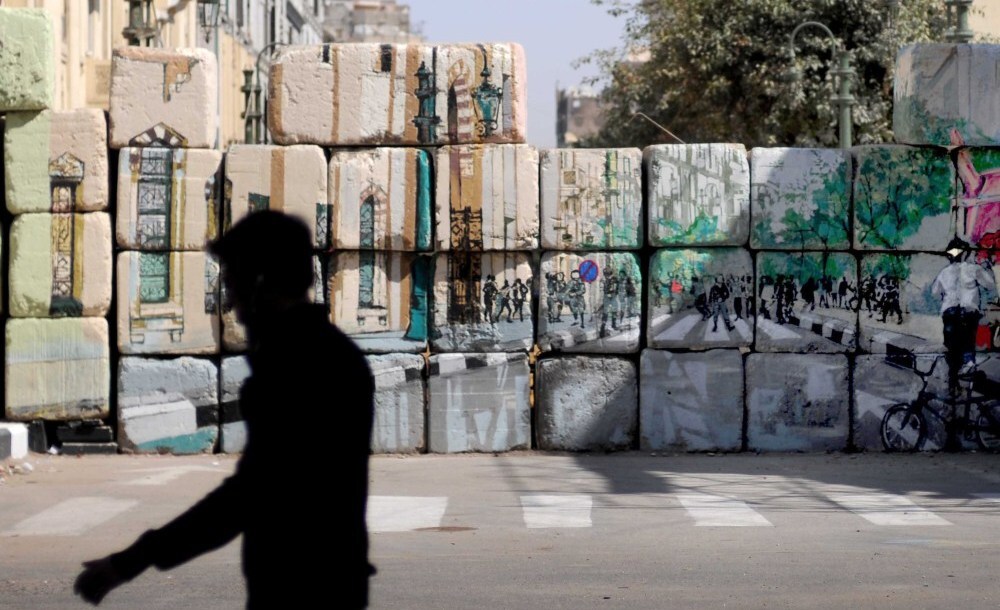 After clashes between protesters and security forces, Cairo's police erected walls to keep demonstrators away from the Interior Ministry. Street artists then painted this wall across Sheik Rihan Street.

Egypt's revolution has brought with it unrest, including clashes in Cairo in the areas around the Interior Ministry, a hated symbol of the former regime.

After five days of skirmishes in early February, Cairo's police chiefs ordered the construction of a series of 10-foot walls, seven of them in all, to block off access to the ministry.

Other walls have sprung up throughout the area, too, following other bouts of violence. Vibrant neighborhoods have been transformed into a maze of checkpoints and concrete blocks. Now residents are trying to get adjusted to the new, imposing barriers that have virtually paralyzed a large section of downtown Cairo.

Walls Around The World

As Egyptians are beginning to do, Iraqis also turned concrete barriers into canvases. Artists painted the walls that had been erected to protect buildings from bombs after the U.S. invasion. The murals include scenes of desert landscape, animals and blue water. Baquir al-Sheik told USA Today in 2007 that the walls could serve more than one purpose.

"We want people to feel their environment, to remember their history," he said. "Hopefully it will remind some people that there is good news in this country, not all bad." 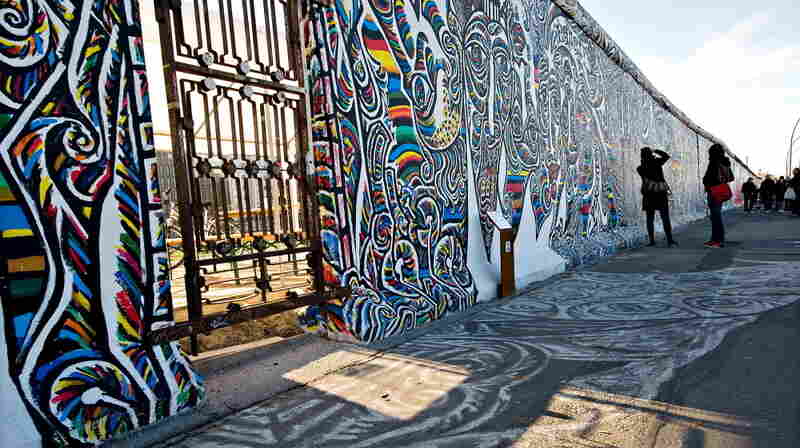 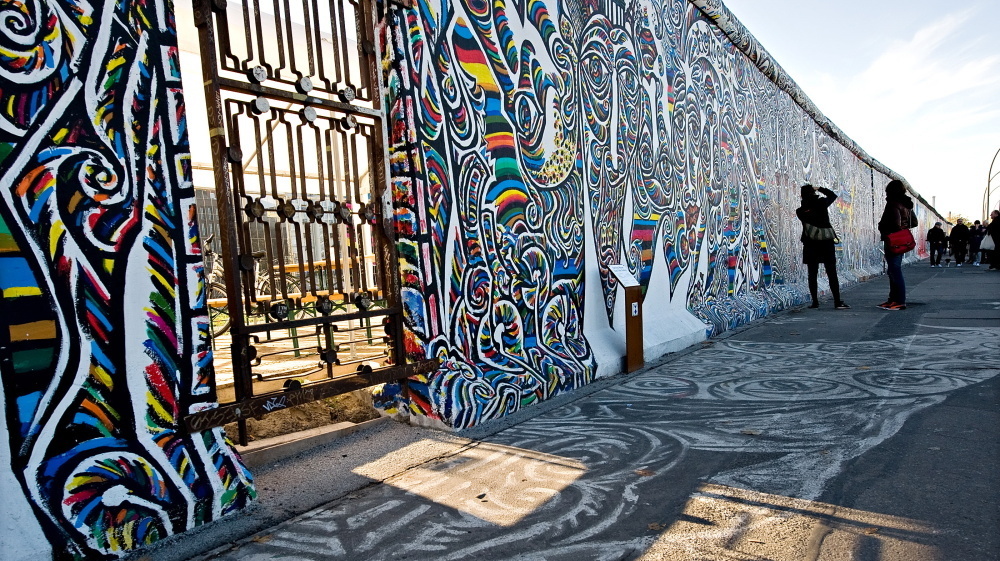 Artist Rosemarie Schinzler was among those chosen to paint the wall. She told the BBC that the gallery can be educational for those who did not experience living in a "divided country."

"It's important for all Germans to learn about the negative and positive aspects of their history," she says.

How Long Will The Walls Remain?

Mohsen Issa is the owner of a pet store that has been in business in the city for more than half a century. When he returned to his shop after clashes in November, he found a horrific scene.

"I came to see the animals, and of course they were all dead. I had many fish and a Rottweiler, and cats — all were suffocated. I tried to get to the shop earlier but I couldn't," he says.

He says the animals died because of exposure to tear gas. Like other shop owners in the area, Issa says the new walls have hurt his business, but he worries that the security situation might be worse if they weren't there.

"The walls are necessary until we have a new president, and then all this will be removed," he says. "So we should wait for two months, and it's OK, we can just go around."

But others here are not prepared to wait. Khaled el-Balshy, the editor-in-chief of Al-Badeel newspaper, says the walls have turned his neighborhood into a sort of green zone — a reference to the heavily fortified section of Iraq's capital Baghdad, established after the U.S. invasion.

Balshy has sued the head of Egypt's ruling military council and other prominent figures, calling for the removal of one particular wall that stands between his home and his office.

"I'm accusing the government of the same things that they accuse protesters of doing — disrupting traffic and slowing down the economy," Balshy says.

Mohamed Elshahed, an urban planning expert, says that the walls are symbolic of a long history of troubled relations between Egyptian police and civilians.

"In a way, they are new and unprecedented in their physical manifestation, but they reflect divisions that had already existed long before — between rulers and ruled, state institutions and the population," he says. "Now that the security apparatus has been weakened so much, the division had to be manifested in a literally concrete way — which is walls."

Mohammed Kadry Said, a retired major general and a senior analyst at the Ahram Center for Political and Strategic Studies, says that the walls provide a limited solution.

"Either you go out and shoot the crowd who are attacking the building of the Ministry of Interior and can put a fire on it, or you can make a shield, so at least you are safe." A long-term solution, Said says, will only come by improving the relationship between police and citizens.

On a recent afternoon, a group of artists took on the task of removing the walls — figuratively if not literally — by painting the barriers with images of the streets behind them.

"We are symbolically removing the walls," said Salma al-Tarzy, one of the artists. "Therefore we are painting streets in perspective or whatever anyone wants to do, but the thing is these are not walls. We are refusing the walls physically and as a symbol of the regime of the military."

Neighborhood residents gathered to look at the painted image of the streets beyond the walls — a reminder of what has been lost.

Editor's Update 3/31: A small group of protesters tore down one of the walls on Friday night. Security forces confronted the demonstrators, but there was no serious violence. The remaining walls are still in place. The editorial curation site Storyful has videos and more from the night's events.