Accessibility links
Beef, Tarantula And Gout: Food Critics Suffer, Too Former New York Times restaurant critic Frank Bruni recently revealed he has gout. It's hard for most of us to feel too sorry for people who get paid to eat free meals at posh restaurants, but food professionals will tell you: Eating asks a lot of your body. 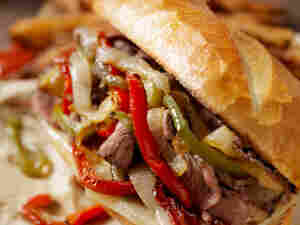 Food professionals will tell you: Eating asks a lot of your body. iStockphoto.com hide caption

'Scuse me, but is someone trying to kill off food critics?

Frank Bruni, the former restaurant critic of The New York Times, now an op-ed columnist, has revealed that he has gout.

Gout is a painful inflammation of the joints that's been called the King's Disease because it's historically associated with the kind of gluttony only kings could afford: profuse servings of beef, lobster, goose liver and strong drink.

Mr. Bruni calls his gout, "a cruel joke, this," and says he's trying to reform his diet with grains, nuts and something called moderation.

Pete Wells, the current critic of the Times, told the Eatocracy blog, "Frank's news makes me a bit more nervous ... you have to face the facts that you're asking a lot of your body."

Any high school athlete or U.S. soldier in Afghanistan asks a lot of their bodies, too.

But Susan Levin, a dietician for the Physicians Committee for Responsible Medicine, says, "I feel for food critics. Who knows when that one dietary hit will push them into a blocked artery, a stroke or insulin shutdown?"

Frank Bruni is a wise man who doesn't confuse the risks of reviewing restaurants with covering wars. But it's hard for most of us to feel too sorry for the pains, pounds, anxieties and acid reflux of people who get paid to eat free meals at posh restaurants and write about it, from potage to creme chantilly.

Hannah Raskin, food critic at Seattle Weekly, told us, "We're immersed in food news. We know what we're doing to ourselves," and says that at food critics conventions, there are always lines to get on the hotel's exercise machines.

Monica Eng, who covers ethnic restaurants for the Chicago Tribune — the only beat in journalism that I have ever really coveted, or did until now — says curbing consumption isn't the only challenge.

She once had to eat, "crickets, tarantulas and scorpions to see how they paired with wines. Turns out nothing really tastes good," she says, "when you've got tarantula leg hairs stuck to your tongue."

Food these days is often treated as some kind of sporting event or novelty act. But some of the most memorable meals I've shared were with people in war zones who ingeniously scraped together bits and pieces from relief supplies to make something amazing — like a golden cake from beans and raisins in Sarajevo — that reminded us how creating joy keeps people going.

By the way: I have covered 10 wars, but never had to eat a tarantula. And now that I know there's no good wine pairing, I never will.