Accessibility links
First Listen: Bonnie Raitt, 'Slipstream' Slipstream serves Raitt's lifelong project of expressing how blues idioms apply to the life of the modern woman. The guitarist and singer's first release since 2005, it's warmly contemporary, while still strongly rooted in the blues moods and techniques that Raitt has always treasured.

Used To Rule the World 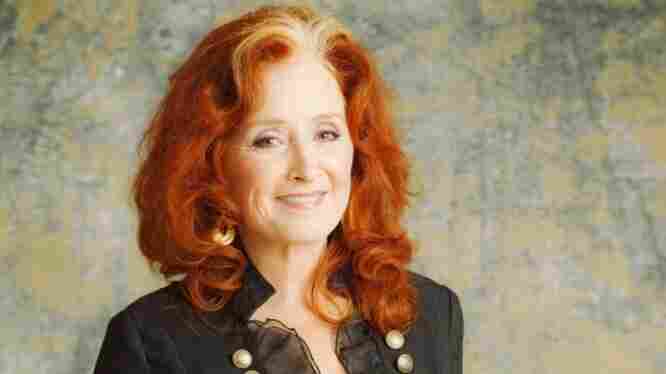 There are two ways to carry old practices forward: Preserve or adapt. Both approaches have their ups and downs. Mere preservation can turn something hard, laying on the sheen of authenticity that masks death within. Adaptation can dilute a thing's essence so thoroughly as to render it unrecognizable.

The most skillful practitioners of a tradition — the blues, for example — swim between these two lanes with a fluidity which belies the thought and effort that makes their work so smooth. Bonnie Raitt has been doing this since 1971, when she emerged as a redheaded hope for a musical style that had already been co-opted by many an overblown classic rocker. With a voice as buttery as grits and a remarkable capacity for playing bottleneck guitar, Raitt quickly earned her place on the dais with forebears like Sippie Wallace and Howlin' Wolf. But she also had a great pop sense, finding kinship with contemporary songwriters like Jackson Browne.

Fast forward more than four decades, and Raitt still moves forward with grace and substance, showing how the blues remain relevant, both to her personally and in the larger world. Slipstream is the guitarist and singer's first release since 2005, inaugurating her label, Redwing. It represents a regrouping after Raitt's loss of both parents, her brother and her best friend, and was inspired by her own struggle to reclaim the private life she'd given to her music, as well as the larger American crisis of the current recession. Produced mostly by Raitt herself, with four outstanding tracks helmed by master of atmospherics Joe Henry, it's warmly contemporary, while still strongly rooted in the blues moods and techniques that Raitt has always treasured.

Slipstream provides plenty of the many-sided adult-contemporary pop that made Raitt a huge star in the late 1980s with hits like "Something to Talk About." Chosen with Raitt's usual impeccable taste from the cream of her songwriting circle (including Randall Bramblett, Paul Brady and Al Anderson), the bulk of Slipstream serves Raitt's lifelong project of expressing how blues idioms apply to the life of the modern woman. There's a reggae take on Gerry Rafferty's yacht-rock favorite "Right Down the Line;" Bramblett's "Used to Rule the World," a sidelong glance at the American Dream that Sharon Jones would love; an almost Western ballad about fame and drugs, "Marriage Made in Hollywood" (Brady's original sounds more Irish); and Anderson and Bonnie Bishop's perfectly despondent "Not Cause I Wanted To," a modern rambling-woman's blues that allows Raitt to demonstrate her unmatchable gift for making regret beautiful.

In all of these songs and more, the production sounds clean and intimate, while the guitars — Raitt's, Anderson's and tourmate George Marinelli's — take up as much room as the vocals. This is a plus. Raitt's chops are subtly honed and her responsiveness to her bandmates turns Slipstream into a rewarding group dialogue. The talk gets most serious, though, in the four songs Henry produced, three of which also feature electric Zen masters Bill Frisell and Greg Leisz.

It's simply a thrill to hear Raitt in her element, exchanging guitar licks and lines with Frisell and Leisz. Two Bob Dylan covers, both culled from 1997's Time Out of Mind, allow the musicians to wax cinematic on basic blues forms. Henry's own "You Can't Fail Me Now," co-written with Loudon Wainwright III for the soundtrack to Knocked Up, gains a gospel flavor here. This is preservation as quiet, personally driven innovation, with new shades of meaning shot through familiar phrases.

In these evocative moments and throughout Slipstream, Raitt and her fellow players never break a sweat about fitting in with current pop trends; they're doing what they love, and it's utterly relevant because it represents their well-considered lives. Raitt's gift for expressing emotions on a real, human scale is what makes her so beloved. On Slipstream, she takes on some of the hardest, and she doesn't fail us now.