Accessibility links
N.Y. Preschool Starts DNA Testing For Admission For years, New York parents have been applying to preschools even before their youngsters are born. That's not new, but the approach one prestigious pre-school on the Upper West Side is. 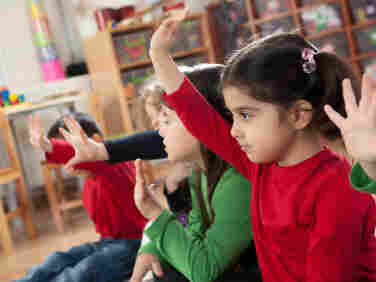 At the Porsafillo Preschool Academy, there are 32 spots but more than 12,000 applications. iStockphoto.com hide caption

For years, New York parents have been applying to preschools even before their youngsters are born. That's not new, but the approach one prestigious pre-school on the Upper West Side is.

At the Porsafillo Preschool Academy, all applicants must now submit a DNA analysis of their children.

The preschool is housed in a modern glass and steel building designed by IM Pei. It's situated in a leafy corner of the Upper West Side. On a recent afternoon, Headmaster Rebecca Unsinn showed off "Porsafillo Pre," as it's called.

"Over here, we have computer labs, C++ learning, which of course, as I'm sure you know, is a language of computers," she says. Wait, computer language? These preschoolers are learning C++?

"Oh, absolutely they are," Unsinn says. "And they're very good at it."

That's not the only language they're learning; all the children are also enrolled in a Mandarin Chinese immersion program.

More than 12,000 applications pour into Unsinn's office each fall. That's 12,000 hopefuls for just 32 spots a year. It makes Porsafillo Pre the most competitive preschool in the United States.

So in a bid to weed out the kids who have no chance, the school decided to require a DNA test for all applicants. Before she joined the school in 2009, Unsinn was a child neurologist. She was hired specifically to implement this new policy.

Her team is looking for genetic markers that indicate future excellence — things like intelligence, confidence and other leadership traits.

One expectant couple has gone to great lengths to get their future child a spot at Porsafillo.

At the New Amsterdam Memorial Hospital, Richard Tromper and Elizabeth Tauschen are ready for their test. Elizabeth is 24 weeks pregnant, and the couple is applying for admission to Porsafillo for the fall of 2015.

"I went to Princeton," Tromper says. "I was lucky, I mean, I got into Princeton, I worked hard. But if our child gets into this preschool, he or she IS going."

Porsafillo Pre is the express lane, the couple says, a one-way ticket to success.

From Tauschen's blood test, scientists will isolate her unborn baby's genetic makeup then pass their findings to the admissions office at Porsafillo. The school has an exclusive agreement with the hospital. Tauschen and Tromper are taken into a room beside the lab, the blood is drawn, and the vial is then escorted immediately into the lab. About a month later, results will be delivered to the school.

Some parents are already planning to take legal action against the school in the event their children are passed over for admission. A recent op-ed in the New York Times called the practice "ghoulish" and "unethical." Headmaster Unsinn dismisses the criticism.

"This is not unethical at all. If anything, it's extremely ethical. This is now no longer a subjective decision," she says. "This is a clinical test that can show us how a child will perform throughout its life."

The Porsafillo Academy will begin to accept applications under their new DNA policy today, April 1.