Accessibility links
The 1940 Census: 72-Year-Old Secrets Revealed On Monday, the National Archives will release a mother lode of previously unavailable data from the 1940 census. The mass of retro information is like a time capsule, dug up from yesterday, that will offer a sharp look at how much — or how little — America has changed in the past 72 years. 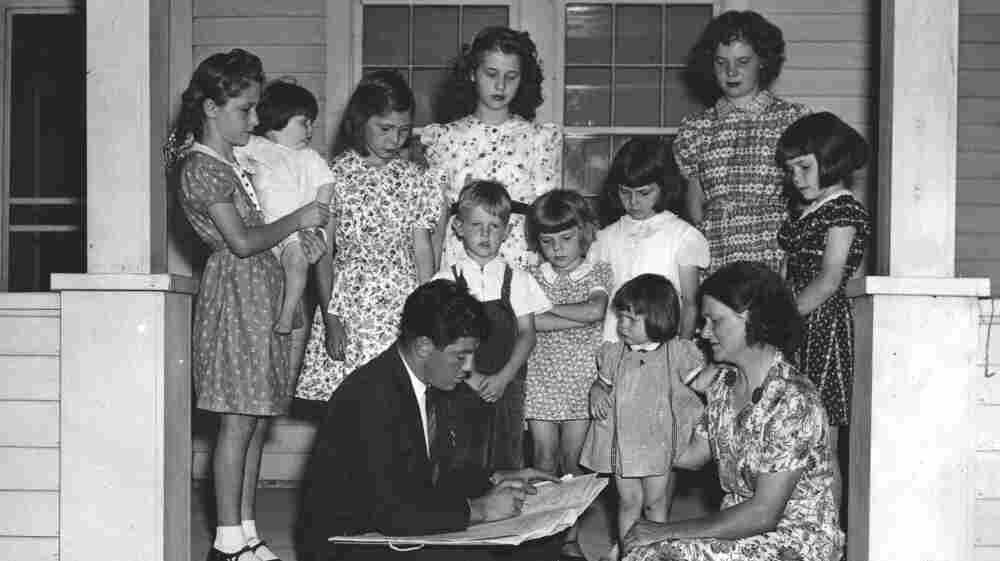 An enumerator interviews a woman for the 1940 census. Veiled in secrecy for 72 years because of privacy protections, the 1940 U.S. census is the first historical federal decennial survey to be made available on the Internet initially rather than on microfilm. National Archives at College Park hide caption 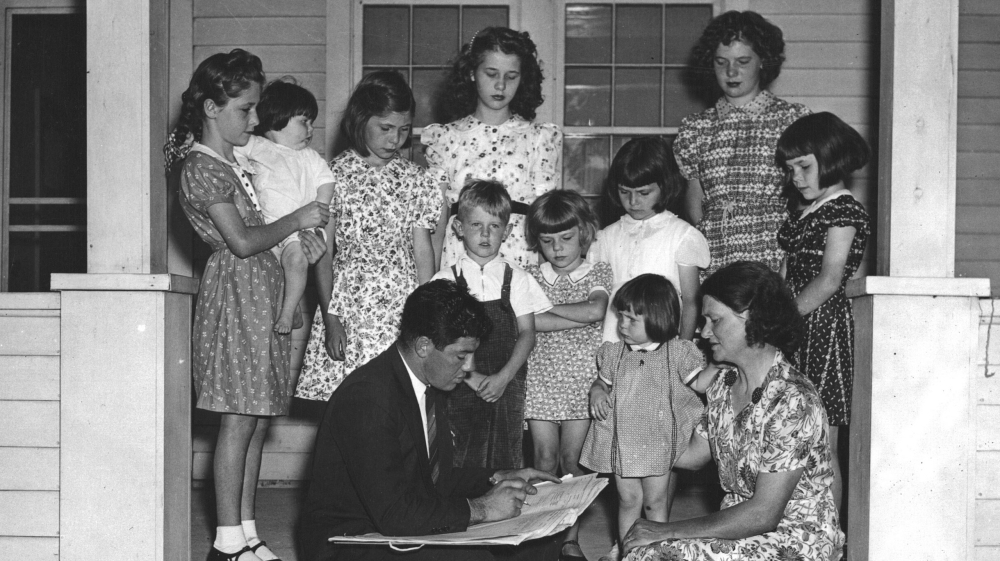 An enumerator interviews a woman for the 1940 census. Veiled in secrecy for 72 years because of privacy protections, the 1940 U.S. census is the first historical federal decennial survey to be made available on the Internet initially rather than on microfilm.

Nylon stockings became all the rage. Black fedoras were the "pure quill" — meaning the real deal. Bing Crosby crooned Only Forever on the console. And Hattie McDaniel was the first African-American actor ever to take home an Oscar.

Ah, 1940. Three score and 12 years ago, America was in a very different place — economically and culturally.

But on April 2, 2012, when the National Archives releases detailed data from the 1940 census, we will get an even keener idea of how much — or how little — this nation has really changed in the past 72 years.

We already have general census information from 1940, but the "manuscript census" — the conglomeration of individual forms filled out by citizens at the time — has not been available until now.

Data miners will have the opportunity to pick and chip through more than 3.8 million digital images of census schedules, maps and other sociological minutiae, explains Vicki Glasier, of the U.S. Census Bureau.

The mass of retro information is like a huge time capsule, dug up from yesteryear.

What will we learn from this mother lode?

The pivotal year 1940 "marked the beginnings of a shift from a depressed peacetime to a prosperous wartime," says David E. Kyvig, author of Daily Life in the United States, 1920-1939.

The vast data dump, Kyvig says, will allow historians "to look closely at particular communities and how people within them were doing in terms of employment, income and material comforts."

With privacy guaranteed, people opened up. They let the census-takers into their homes and they answered all kinds of questions. Everyone spoke openly of their living arrangements, their jobs, their families, their faith and a whole lot more. And bit by bit, a mosaic of American life took shape.

It all added up to a sort of primitive Facebook.

There is a reason that all of this up-close-and-personal information from 1940 is being released all these years later. "In 1952, the director of the Census Bureau and the National Archivist agreed that keeping census records private for 72 years balanced public release of federal records with the tradition of confidentiality," explains the Census Bureau's Glasier. In other words, 72 years was considered at the time to be longer than most lifespans.

From aggregate information made available by the Census Bureau, we already have a broad-stroke, then-and-now portrait of 1940.

Only 5 percent of the 1940 population had college degrees. By 2010, 28 percent of Americans were college graduates. 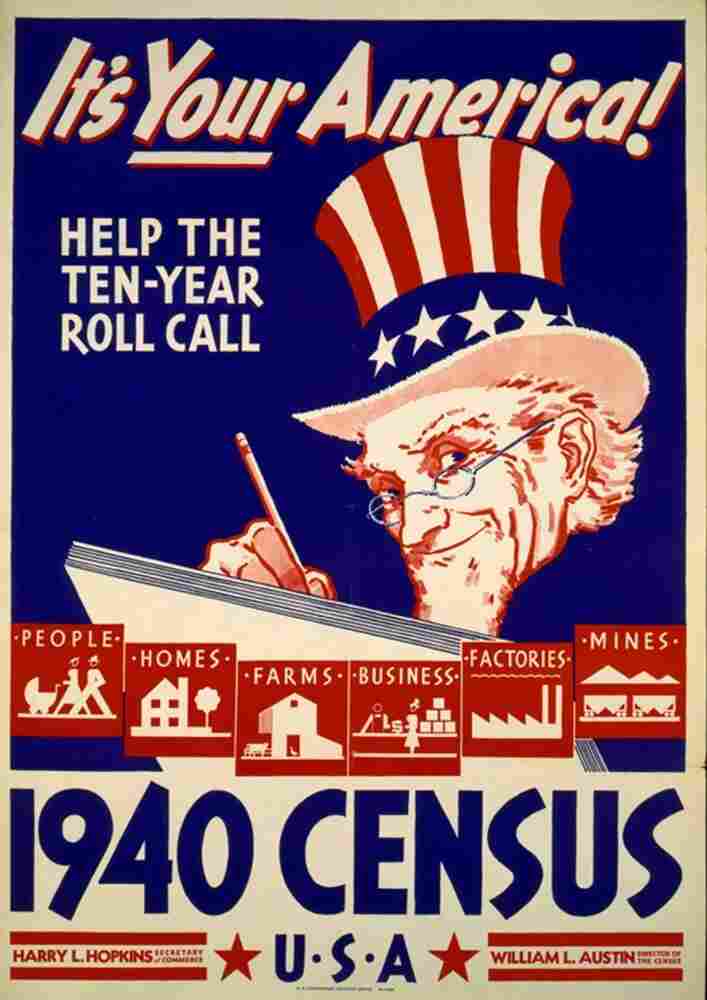 The period from 1940 to 1960, says Kyvig, who is planning to write a book about those decades, "was an era of remarkable progress in the everyday lives of ordinary Americans, and we need to have a clear picture of where we were in 1940 in order to appreciate the changes soon to occur."

Come Monday, Kyvig and others will be able to drill down into the quotidian habits of folks in 1940. Genealogists are especially interested in the files because it was the last census before World War II.

Historians are intrigued because it will present a panoramic snapshot of a nation on the cusp. Some Americans were still stuck in the financial muck of the Great Depression, while others began to prepare for — and prosper from — America's entry into World War II.

"I suspect we will learn more about how much the ramping up of government spending on defense changed the economic circumstances and everyday lives of ordinary Americans," Kyvig says. "As we see how the country evolved over the subsequent 20 years, where we have aggregate census data ... we ought to be able to see more clearly how government spending bettered everyday life, confirmed Keynesian economic theory and revealed that, before the war, the New Deal did too little, rather than too much, to stimulate the U.S. economy."

According to training films made for the occasion, the Census Bureau sent out more than 120,000 fact-gatherers, known as "enumerators," in the spring of 1940 to survey the nation's 33 million homes and 7 million farms.

Radiating out across the nation from Washington, their goal was to come home with unbiased facts to help guide decision-makers, including businesspeople, farmers and legislators.

Participation by the populace was mandatory. After all, the voice-over in one film intoned, "You cannot know your country, unless your country knows you."