Accessibility links
Oil Scare Turns FedEx On To Energy Efficiency When Fred Smith started FedEx in 1971, the company nearly didn't make it because of the spike in fuel costs related to the Arab oil embargo. That experience led Smith to turn FedEx into one of the leaders in looking for alternatives to power its vans, trucks and jets. 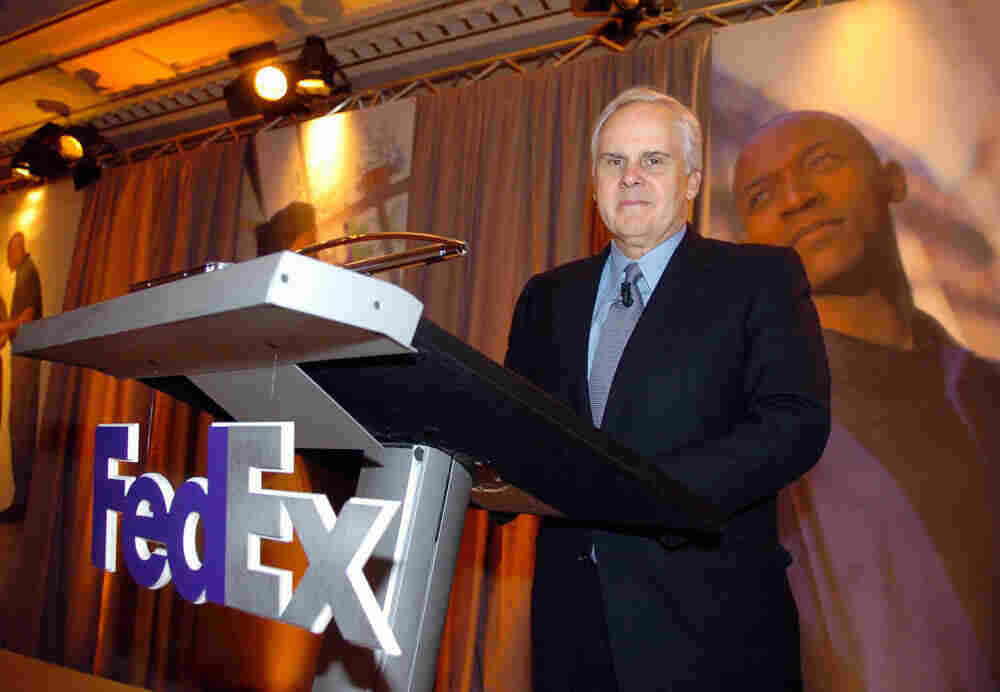 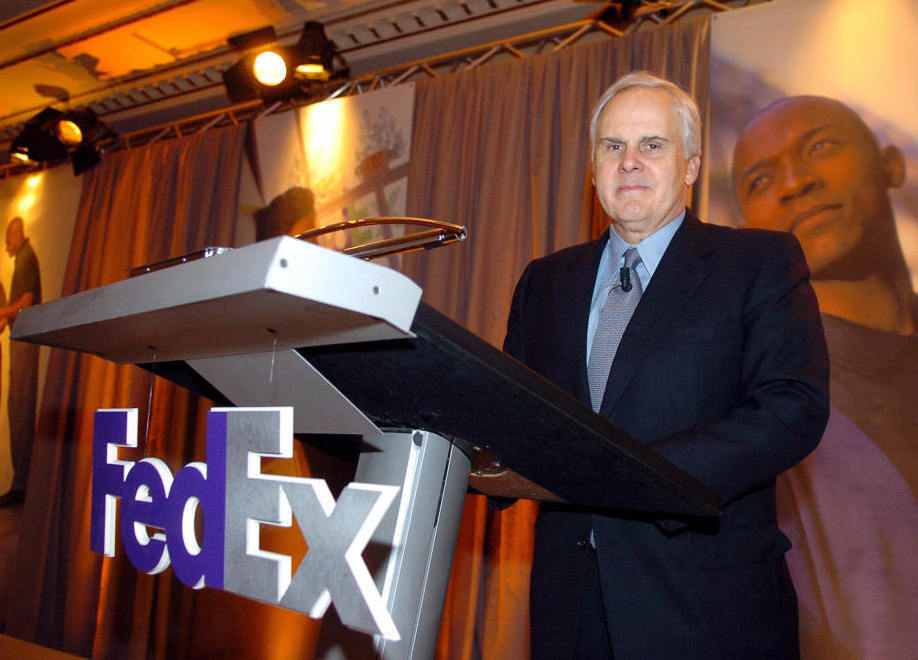 FedEx CEO Fred Smith, seen here in 2005, says he's is concerned about the effect oil consumption has on the U.S.

The rising cost of oil isn't just a hit to the family budget. Businesses are hurt, too. Few are more affected than firms like FedEx. It deploys nearly 700 planes and tens of thousands of trucks and vans every day to deliver packages around the world. And few business leaders are more focused on finding alternatives to petroleum-based fuels than FedEx CEO Fred Smith.

Shortly after Smith founded Federal Express, the 1973 Arab oil embargo almost killed it. The experience imprinted Smith with a keen interest in the price and availability of oil.

"That would be an understatement," Smith laughs. "For sure."

FedEx now burns 1.5 billion gallons a year of petroleum-based fuels, and, once again, the potential for conflict in the Middle East, specifically with Iran, has boosted prices and raised fears of a supply disruption. Smith says keeping the supply of imported oil flowing has cost the U.S. dearly over the past 40 years.

"We spend about $70 [billion] to $80 billion a year as a country doing that, not just for ourselves, but for the rest of the world as a whole," Smith says. "And that's even before we get to the $1.3 trillion we've spent on Afghanistan and Iraq, and as Alan Greenspan, the former chairman of the Federal Reserve, said pretty plainly, 'Iraq was about oil.' Not totally, but ... so these are very big issues." 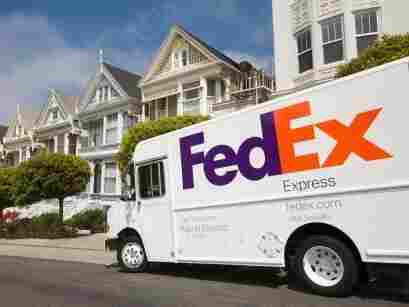 A FedEx hybrid delivery truck. In FedEx's fleet of over 90,000 vehicles, 408 are hybrid or electric, and 4,000 are fuel-efficient, lower-emitting "Sprinter" vans. Courtesy of FedEx Corp. hide caption

Smith, a former Marine, has tried to address those issues, advocating strategies for the country through his seat on the Energy Security Leadership Council, a group of CEOs and retired generals and admirals. He has also developed a corporate plan to reduce the use of petroleum at FedEx. It includes three strategies — one for its light vehicle delivery vans, another for its heavy trucks and a third for its planes.

For delivery vans, says Smith, FedEx is betting on electric or hybrid vehicles.

"An all-electric pickup and delivery van will operate at a 75 percent less per-mile cost than an internal combustion engine variant," he says. "Now, I didn't say 7 1/2 percent — [I said] 75 percent. These are big numbers."

Smith points out that the vehicles would be charged in off-peak hours, minimizing the need for additional power plants. Battery life and cost remain a challenge, but Smith is optimistic.

"I think in three or four years you will have a battery vehicle with a range that's probably double what it has today — a couple of hundred miles versus a hundred miles — and it'll probably be 25 percent to 40 percent cheaper than [it] currently is."

Smith says he believes that six years from now, electric vehicles will be in wide commercial use, transporting everything from FedEx packages to plumbers and pizza.

For FedEx's fleet of nearly 700 planes, Smith says biofuel, probably produced with algae, will replace much petroleum-based jet fuel. The technology has already been proven, but breakthroughs are needed to produce the fuel on the scale that's necessary.

For larger trucks, Smith says, the alternative energy answer is liquid or compressed natural gas. He says companies like Navistar and Cummins are developing new engines to power those trucks on natural gas, at savings of about 40 percent compared with diesel at current prices.

"As Cummins and Navistar and these folks put these engines out there, anybody that makes their living driving long-haul trucks or locally fueled trucks or buses is going to have a powerful incentive," he says.

While natural gas refueling stations are a hurdle, Smith thinks an adequate number, as few as 700, could be quickly installed along the interstate highway system to make long-haul trucking with natural gas viable within a few years.

Smith says the discovery and unlocking of the vast amounts of natural gas in shale formations is a game changer.

"For the United States, it's been near providential," he says. "I think it offers us an opportunity to deal with a lot of issues that have been very difficult."

That includes America's reliance on coal to generate electricity. If natural gas were used instead, harmful emissions could be cut 50 percent.

Smith believes the country's immense shale gas resource, along with shale oil deposits in places like Texas and North Dakota, could help make the U.S. energy independent for the first time since he founded FedEx. But, he says, only if these resources are coupled with conservation and a move to alternative fuels.

That would be a big change from the way things were when FedEx began.

"To me, the most tragic thing is to think about these families that lost these 5,000 wonderful young men and women in Iraq and Afghanistan," he says. "The human cost of this reliance on petroleum from unstable and unfriendly parts of the world has cost this country dearly, and we need to work as hard as we can to solve this problem."

How Do You Ship A Horse To The London Olympics? Carefully, And Via FedEx March 7, 2012
Is U.S. Energy Independence Finally Within Reach? March 7, 2012
As Elkhart's Electric Dreams Fizzle, RVs Come Back March 6, 2012