Accessibility links
30 Years On, Argentina Still Claims Falklands Argentina invaded the Falkland Islands 30 years ago Monday, touching off a short but bloody war with Britain. Argentina lost, and the islands in the frigid South Atlantic stayed under British control. However, Argentina still claims the islands. 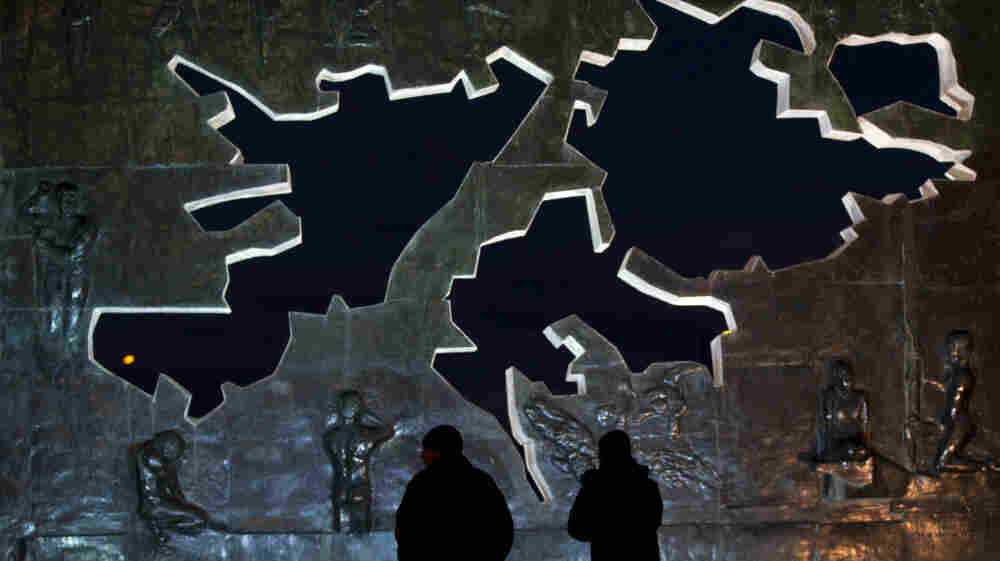 People walk past a Falklands War memorial in Ushuaia, Argentina, on Sunday. Some Argentines want Britain to give up the Falkland Islands, which Argentina tried to take over in a bloody war in 1982. Natacha Pisarenko/AP hide caption

Thirty years ago, on April 2, 1982, Argentina invaded the Falkland Islands, leading to a short but bloody war with Britain. Argentina lost, and the islands in the frigid South Atlantic stayed under British control.

Argentina still claims the islands, however, and is pressuring Britain like never before.

On a recent day, the ornate Palais de Glace museum in Argentina's capital, Buenos Aires, was packed with visitors browsing through a collection of photographs from the Falkland Islands war.

The Argentine invasion and the bloody consequences have been forgotten by much of the world, but not here. People like Julian Vincent come to remember.

"As an Argentine, we feel a profound connection to Las Malvinas, as people here call the Falklands," Vincent says. He says Argentina is within its rights to continue struggling to take control of the islands.

Argentines are taught in schools that Britain stole the Falklands in 1833, when warships ousted a small Argentine garrison. Foreign Minister Hector Timerman says the islands are part of Argentina.

"We are not going to be complete until the Malvinas come back to Argentina," Timerman says. "We are never going to stop peacefully asking Great Britain to sit down and negotiate with us."

Lately, the pressure tactics have included banning ships with the Falklands flag from ports to urging Argentine companies to cut British imports. And there have been threats to restrict Argentine airspace to commercial flights that service the Falklands from neighboring Chile.

The pressure tactics won't work, says Stephen Luxton, who has lived all his life on the islands.

"As a remote community, we're used to constraints on links into the islands, and we're good at working around those sorts of problems," Luxton says, "and that's what we're doing."

"As a fifth-generation Falkland Islander, I very much think that it's our right to choose our own future," he says. "We wish to live here peacefully as a British overseas territory, and we wish to have the right to determine our own future."

As long as that's the case, British Prime Minister David Cameron recently told Parliament, there's nothing to discuss with Argentina.

"The absolutely vital point is that we are clear that the future of the Falkland Islands is a matter for the people themselves," Cameron said. "And as long as they want to remain part of the United Kingdom ... and be British, they should be able to do so."

In Argentina, though, it's hard to forget the sacrifices made in the war, which helps explain people's attachment to the islands. The conflict was short — just 74 days — but had all the features of conventional war: Artillery fire pounded Argentine positions, warships were sunk by Exocet missiles, and there were aerial dogfights and amphibious invasions.

Retired Capt. Juan Carlos Ianuzzo was there, and because of geography and history, he says, the islands are Argentine.

"Argentina got them from Spain, and the English took them away," Ianuzzo says.

He speaks for the majority of Argentines when he says, "We want them back."