Accessibility links
Gold Miners Dig Deep — To The Ocean Floor
Next year, an Australian company plans to start drilling deep underwater off the coast of Papua New Guinea to extract deposits rich with copper, gold, silver and zinc. The firm says the operation is much less messy than mining on land, but some scientists worry about the impact on deep-sea life. 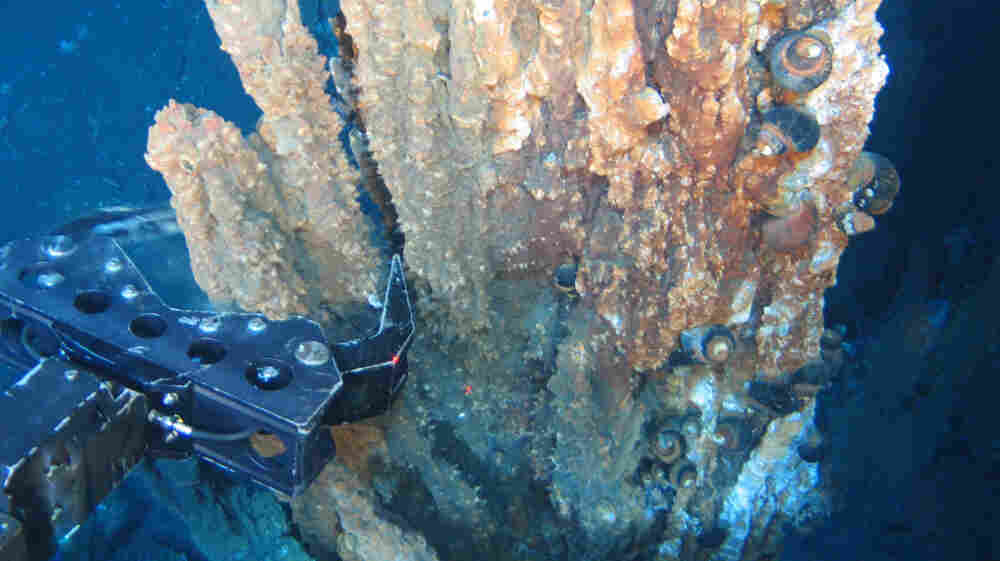 Filmmaker James Cameron recently reminded us of the wonders of the sea by diving solo in a submarine to the deepest spot in the ocean. Next year, if all goes as planned, a rather different expedition will take place 1,000 miles south of that dive: An Australian company will start mining for copper, gold, silver and zinc on the seafloor off the shore of Papua New Guinea.

People have thought about mining the seafloor's mineral wealth for many decades. But now, a combination of high metal prices and sophisticated technology is making that possible. 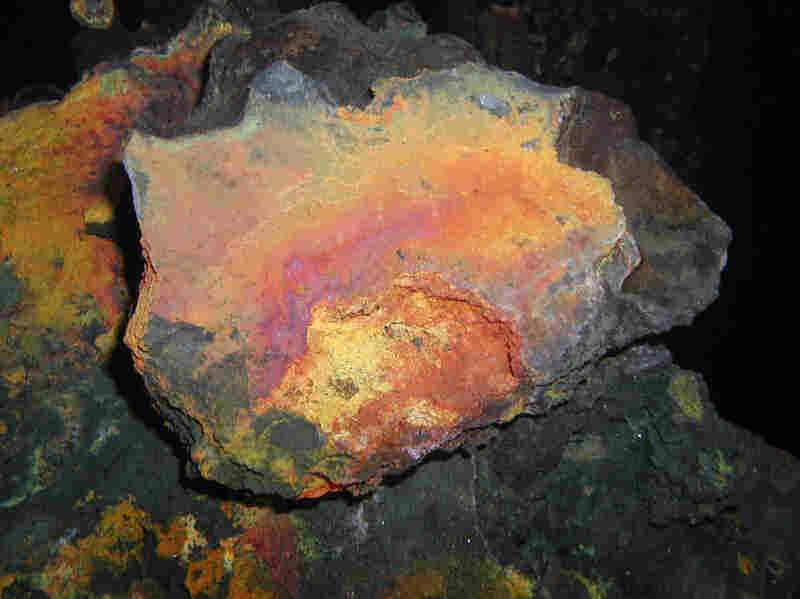 This deep-sea rock is rich in copper. Minerals form in the seafloor because a natural hot spring has been laying them down for thousands of years. Nautilus Minerals hide caption 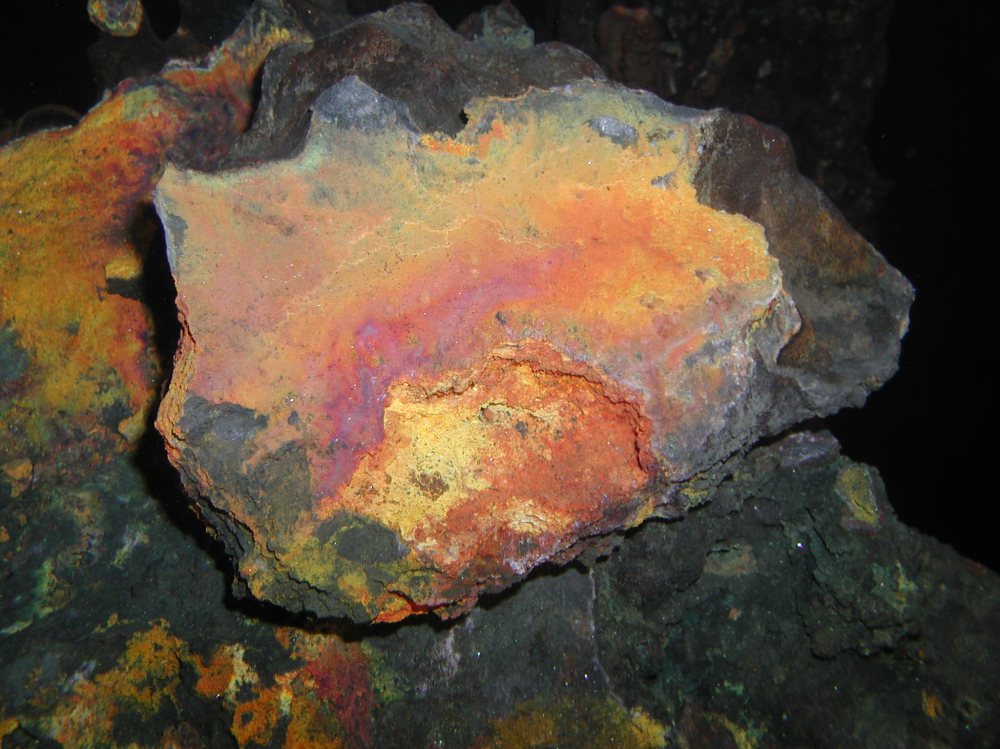 This deep-sea rock is rich in copper. Minerals form in the seafloor because a natural hot spring has been laying them down for thousands of years.

Nautilus Minerals of Australia has a license from Papua New Guinea to mine a site the size of 21 football fields for its rich deposits. The minerals are found there in very high concentrations, because a natural hot spring on the seafloor has been laying them down for thousands of years.

Samantha Smith, the vice president for corporate responsibility at the company, says it's an operation that involves remotely piloted vehicles prowling around a mile under the surface.

"You have two machines that cut, and they do different kinds of cuts," she says. These tools have large grinding wheels and other devices to break up the rock at the seafloor, which is similar in hardness to concrete. "And then you've got a third machine that goes along and effectively sucks the material up from the seafloor."

The material is drawn into a long pipe, similar to the kind used in deep-sea oil drilling. This riser pipe brings slurry to ships on the surface, and the mineral-rich material is hauled to shore. The mineral-rich wastewater that comes up the pipe is filtered and pumped back to the seafloor. That way, it won't harm tuna, which swim closer to the surface, and which commercial fishermen depend upon.

How Do You Mine Underwater?

Mining the seafloor will require a suite of specialized tools to dig up and collect the mineral-rich ore. Two remotely controlled cutting tools will bite into the rock on the seafloor, which is about as hard as concrete.

One looks like a massive rototiller mounted on a hydraulic arm. This one will smooth the surface. A second machine, called a bulk cutter, will tear away at this smoothed surface with a large spiked drum. Both run on bulldozer-style treads.

"It's like cutting the grass," says Samantha Smith from Nautilus Minerals, the company planning this massive operation.

A third remotely controlled machine will follow behind and slurp up the rubble that the two cutting machines generate. The rubble gets drawn up a milelong "riser" pipe, which will carry it to the sea surface. This technology was developed for offshore oil development.

The slurry ends up on a custom-built ship on the surface. That ship will separate the mineral-rich ore from the water, filter the water, and pump it back to the seafloor. Smith says fishermen worried that tuna would be harmed if that mineral-laced water was discharged at the surface. The company realized it could mitigate that risk by pumping the water all the way back down to the seafloor — and it turns out that decision makes it easier to run the entire pumping system.

Offshore, you aren't forcing people off their land to dig mines, and you aren't contaminating rivers and streams.

"There's a potential environmental advantage, and really that's where the industry got a kick start," she says. Of course, the sharply rising value of metals like copper and gold has also made the big expense of this kind of operation worthwhile.

But the same natural hot springs that have deposited all that mineral wealth on the seafloor also support marine life like marine snails, says Cindy Van Dover, a marine biologist at Duke University.

"To a biologist, they're beautiful," she says. "They have symbiotic bacteria that live inside their gills, and those bacteria supply the food energy that drives the community of animals that lives there. So in an otherwise relatively depauperate deep sea, these habitats are generally pretty rich oases of life."

Van Dover is among the scientists that Nautilus Minerals has been consulting in its attempt to limit the environmental damage. She says you can think of mining as a very aggressive experiment: What happens when you carve away the natural chimneys made of these minerals and grind down the surrounding rock?

"We know these systems are often exposed to disturbances," she says. "The chimneys fall down and there are volcanic eruptions in some places. So the animals are adapted to recolonizing new spaces fairly quickly, we think."

It's possible the marine life will be back in a year, she says. But that could prove to be far too optimistic. The company will leave some parts of the area undisturbed so animals there can potentially recolonize the site after the 30-month mining period is over.

"I don't like the thought of messing up a pristine environment," Van Dover says. "I would rather see the deep sea stay unimpacted by human activities. But that's not a very rational view."

But George Woodwell, a scientist who founded the Woods Hole Research Center in Woods Hole, Mass., has a much more visceral reaction to destroying any deep-ocean hot spring.

"The organisms that have evolved to inhabit them are specially adapted to those places. And they are well worth examining, looking at them. They are one of the wonders of the Earth to be preserved, as far as I'm concerned," Woodwell says.

He argues it's time to stop degrading the Earth to sustain our consumptive lifestyles. "So I don't have any sympathy for the idea that we should be mining the seafloor in this late stage in the development of our industrial society. We've got to be more mature than that."

Smith, from Nautilus Minerals, says our hunger for metals keeps growing, so mining is bound to happen somewhere.

"What we're looking at here is more of a holistic view, that maybe going to the seafloor makes environmentally and socially a lot more sense," she says.

The mining activity is set to start toward the end of next year. And if it's successful, it could be the beginning of a whole new industry, operating far from public view and, so far, with very little in the way of international rules and regulations.