Accessibility links
Supreme Court OKs Strip Searches For Minor Offenses The U.S. Supreme Court has ruled that guards may routinely strip search even minor traffic offenders when they are arrested and detained. The court's 5-4 ruling came in the case of a New Jersey man who was arrested because of a computer error. 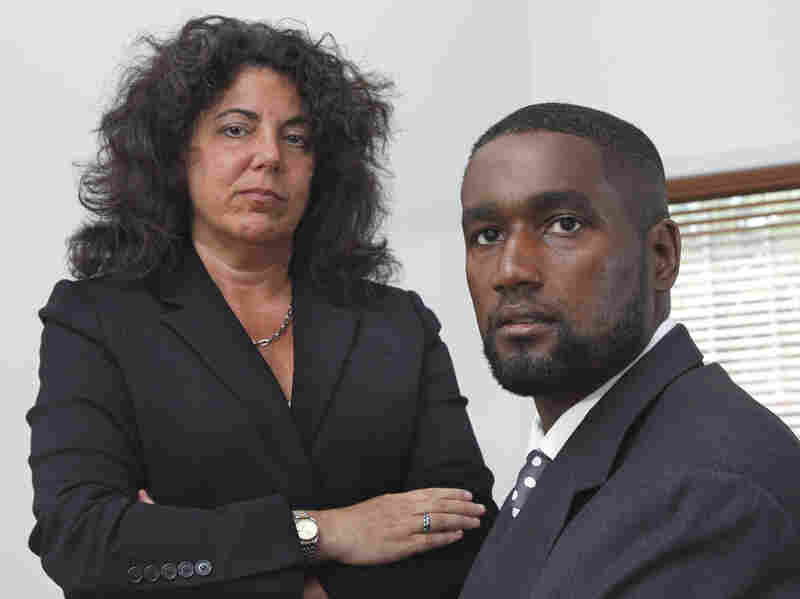 In this Oct. 11, 2011, photo, Albert Florence sits at his home in Bordentown, N.J., with his attorney, Susan Chana Lask. Florence sued after being strip-searched in 2005 when he was arrested because of a computer error. Mel Evans/AP hide caption 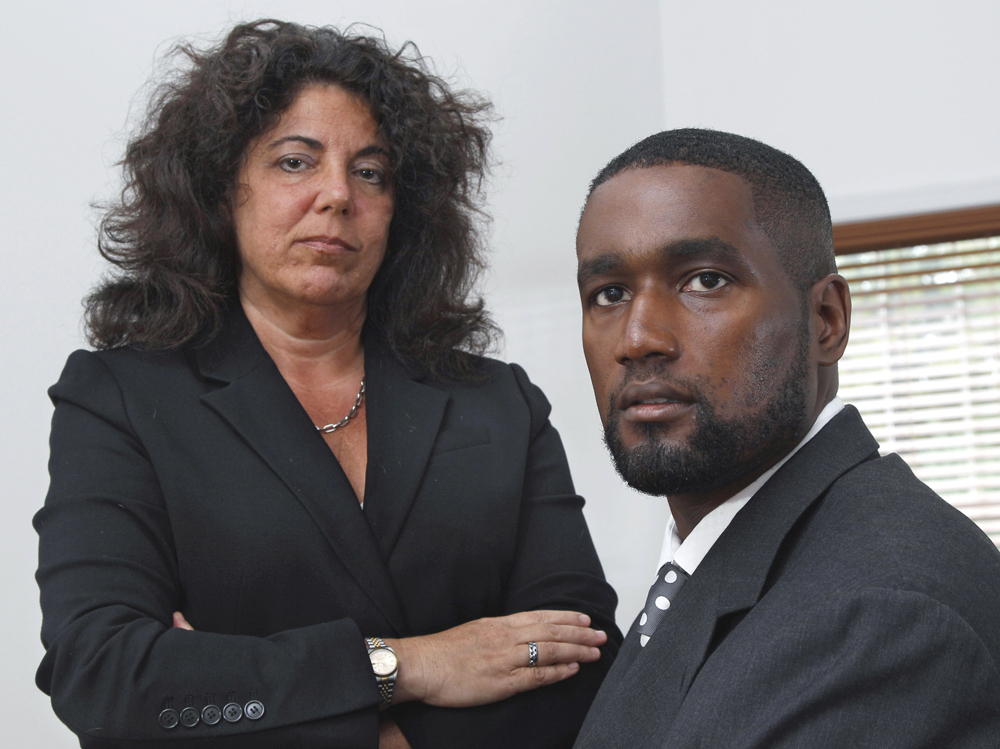 In this Oct. 11, 2011, photo, Albert Florence sits at his home in Bordentown, N.J., with his attorney, Susan Chana Lask. Florence sued after being strip-searched in 2005 when he was arrested because of a computer error.

The U.S. Supreme Court has ruled that guards may routinely strip search even minor traffic offenders when they are arrested and detained. The court's 5-4 ruling came in the case of a New Jersey man who was arrested because of a computer error.

Albert Florence, his wife and little boy were on their way to his parents' home in 2005, when they were pulled over by a state trooper. Mrs. Florence was at the wheel, but the trooper's roadside state records check showed a seven-year-old outstanding arrest warrant for Albert Florence for failing to pay a fine. Florence said he had paid the fine, and pulled out a receipt, which he kept in the car. But the trooper said there was nothing he could do. Florence was handcuffed and taken to the local county jail.

The state would later admit it had failed to properly purge the arrest warrant, but at the time of the arrest, the error turned into a "nightmare," Florence said. He was held in jail for seven days and strip-searched twice.

Florence said the experience "petrified" and "humiliated" him. Upon entering the jail, he was ordered to take a delousing shower, then inspected by a guard who was about "an arm's distance" away and instructed Florence to squat, cough and lift up his genitals.

Florence subsequently sued, contending that automatically strip-searching a person who is arrested for a minor offense violates the Constitution's ban on unreasonable searches.

But on Monday, the Supreme Court disagreed by a 5-4 vote. Writing for the court's conservative wing, Justice Anthony Kennedy noted that jails are "often crowded, unsanitary, and dangerous places," and that, therefore, the courts must defer to the judgment of correctional officials in order to prevent new inmates from putting lives at risk with weapons or contraband that they may "carry in on their bodies."

The dissenters, led by Justice Stephen Breyer, argued that when a detainee is brought in on a minor charge that involves neither violence nor drugs, correctional officials should have to cite some reason to justify a strip search, as opposed to a less invasive screening with a metal detector or even an inspection of a detainee in his or her underwear. There are some 700,000 arrests for such minor offenses each year, and most of those arrested are brought before a judge and released pending resolution of their case. But an undetermined number have found themselves behind bars because there is no judge on duty, because of a bureaucratic snafu, or an error — as in this case.

Breyer noted that people have been detained and strip-searched for offenses as minor as driving with an inoperable headlight, having outstanding parking tickets, violating a dog leash law, and riding a bike without an audible bell. None of these people could have anticipated being arrested, he said, and none would likely have hidden weapons inside their body cavities.

But Kennedy said that given the number of total arrests each year — 13 million — it would be unworkable for correctional officials to exempt one class of prisoner from strip searches. Indeed, he added, even people detained for minor offenses can turn out to be "the most devious and dangerous criminals." He cited, for instance, the case of Timothy McVeigh, the Oklahoma City bomber, who was detained initially for driving without a license plate.

"The justices in the majority don't want to micromanage jails," Kerr says. "So they're saying if the people running the jails think they need to do this, they should be able to do this."

Bernard Harcourt, a law professor at the University of Chicago, however, called the decision "frightening ... the kind of logic that can turn a democracy into a police state" because it is premised on the notion of eliminating all risk at the expense of those who reasonably pose little risk.

In fact, at least 10 states outlaw routine strip searches of those arrested for minor charges, and the Federal Bureau of Prisons and the U.S. Marshals Service bar visual body cavity searches for those arrested on misdemeanor or civil contempt charges. "What the court did was to take a practice that was not universal and give it its constitutional imprimatur," says Harvard Law School professor Carol Steiker. The open question, she said, is whether states that have forbidden this practice will now move to permit blanket strip searches of those arrested for minor charges.

Two of the justices in Monday's majority wrote concurring opinions in an apparent effort to soften the tone of the ruling. Chief Justice John Roberts and Justice Samuel Alito said that there might be some cases in which strip searches are not justified because they are conducted on prisoners who are not put in with other prisoners.

Court Rules On Immunity For Investigators

In a second opinion issued Monday, the court ruled unanimously that police investigators are immune from civil damage suits for giving false testimony to a grand jury.

The decision came in the case of Charles Rehberg, a Georgia accountant who sent anonymous faxes to businesses and community leaders describing dicey and embarrassing details about the financial practices at the leading hospital in Albany, Ga., Phoebe Putney Memorial. At the request of the hospital, the district attorney launched an investigation. During grand jury proceedings, the chief investigator testified that the accountant had assaulted a doctor and made harassing phone calls — information that since has proved to be untrue. Rehberg was indicted three times, and three times the charges were tossed out. He then sued the chief investigator, alleging that he knowingly gave false testimony to the grand jury.

But on Monday the Supreme Court ruled unanimously that such investigators are immune from such lawsuits.

Writing for the court, Justice Alito said that if witnesses could be sued over their grand jury testimony, they "might be reluctant to come forward to testify."

The justices said that witnesses who testify falsely can be prosecuted for perjury, and that the threat of such a criminal prosecution is an adequate safeguard. But critics pointed out that prosecutors rarely are willing to bring perjury charges against their own police investigators.