Accessibility links
In Defeat, Santorum Becomes Conservative Champion Despite falling short in the quest for the Republican presidential nomination, former Pennsylvania Sen. Rick Santorum has established himself as one of the dominant conservative voices in America, particularly when it comes to social issues such as abortion and birth control.

Despite falling short in the quest for the Republican presidential nomination, former Pennsylvania Sen. Rick Santorum has established himself as one of the dominant conservative voices in America, particularly when it comes to social issues such as abortion and birth control.

Santorum announced Tuesday that he is suspending his quest for the presidency.

Santorum ultimately chose to suspend his campaign ahead of the April 24 primary in Pennsylvania. A loss on his political home turf would have done serious damage to his future electoral prospects.

"We made the decision over the weekend [that] this presidential race is over for me, and we will suspend our campaign today," Santorum said at a news conference in Gettysburg, Pa., flanked by members of his family.

Santorum had taken a break from campaigning in recent days owing to his-3-year-old daughter Bella's hospitalization and the Easter holiday. Bella was released Monday night.

But despite having trailed well behind Mitt Romney, a former Massachusetts governor who is now the presumptive GOP nominee, Santorum has "now made himself a national figure," says Rogers Smith, a University of Pennsylvania political scientist. "He has established himself as the most credible voice and the leader of the social conservative wing of the party."

It's not clear whether Santorum will immediately endorse Romney, whom he has criticized as a weak potential opponent against President Obama. But Santorum has said in recent weeks that he will support the party's nominee.

Santorum didn't mention Romney at his news conference but vowed to "continue to fight to defeat President Obama" and help Republicans in Congress.

"This game is a long way from over," Santorum said. 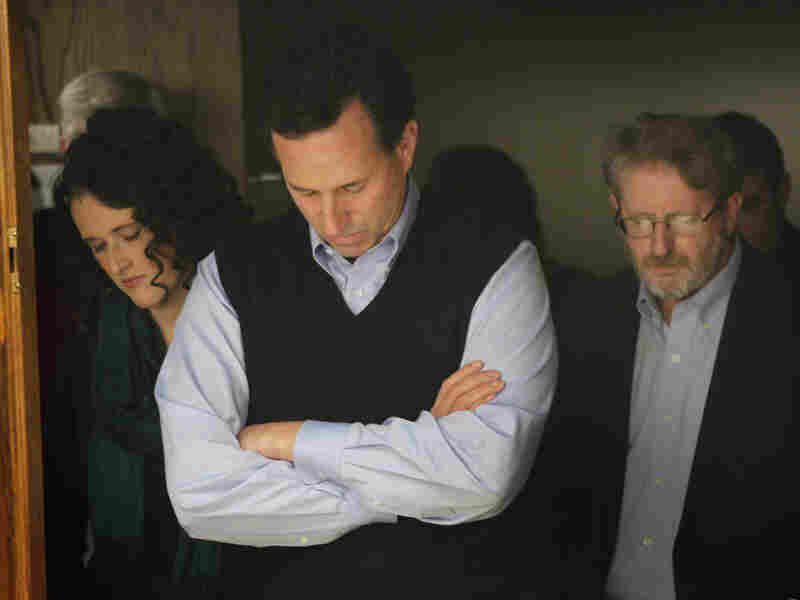 Santorum bows his head in prayer during a campaign rally in the basement of the Northwestern Bank building in Orange City, Iowa, on Jan. 1. Scott Olson/Getty Images hide caption 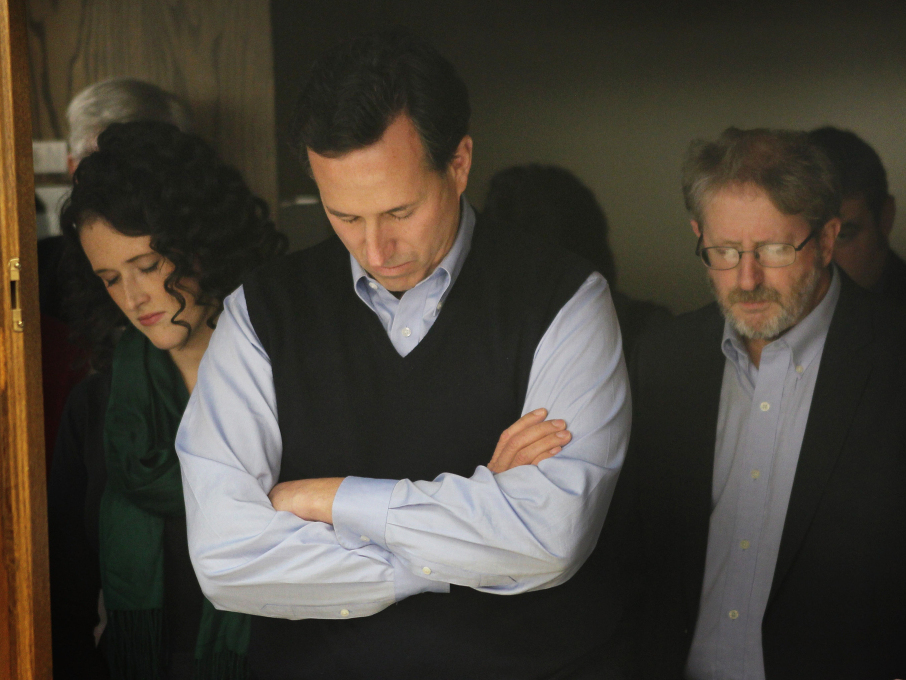 Santorum bows his head in prayer during a campaign rally in the basement of the Northwestern Bank building in Orange City, Iowa, on Jan. 1.

"We won more counties than all the other people in this race combined," Santorum said of his underdog campaign. "I found a deeper love for this country."

From Out Of Nowhere

Santorum spent most of the year leading up to the primary season as a virtual nonfactor in the race, polling well behind Romney and other Republican hopefuls.

That Santorum could come this far and remain standing well into the spring as the primary conservative challenger against Romney are circumstances almost no one would have predicted as late as last December.

"I kept saying at the time, 'What is he doing in this race?' because he got 3 percent consistently, in poll after poll," says J. Ann Selzer, a pollster in Iowa.

But Santorum went on to win the caucuses in Iowa, the first contest of the campaign. He carried 11 states in all and, although he wasn't able to knock Romney off his throne, he was able to give him a scare from time to time.

"He aimed his message firmly at his intended base, which was religious conservatives," says former Pennsylvania Republican Rep. Phil English, who has known Santorum since college. "He invested all of his time upfront in his greatest area of strength, which is grass-roots campaigning."

Santorum stayed in the race well past the point when most Republicans — including many ardent conservatives — had called for him and the other remaining candidates to concede and fall in line behind Romney.

Santorum may have hoped to gain enough delegates to remain viable if lightning would have struck — or at least to have leverage to push Romney to adopt conservative positions more to his liking.

Even though Santorum had come under pressure to call it quits, there was no advantage for him in doing so, says Henry Olsen, vice president of the American Enterprise Institute, a conservative think tank.

"Every time he went to a state, even if he didn't win, he built up a network," Olsen says. "Why should he have cut that short to curry favor with the big-money people lined up behind Romney, who aren't going to like him in four years anyway?"

Should Romney lose, the question Santorum will face going forward is whether to try to broaden his own message and appeal, or remain, as Olsen calls him, "the paladin of the social conservatives."

Santorum single-handedly resurrected the GOP's social conservative wing as a force to be reckoned with, Olsen argues. It had gone a bit dormant in favor of fiscal conservatives in response to budget deficits under President Obama and broader economic issues.

Support from key social conservative leaders in Iowa such as Bob Vander Plaats, president of Family Leader, helped elevate Santorum there. Despite poor showings in other early contests — Santorum finished fourth in New Hampshire and third in South Carolina — religious conservatives elsewhere came to embrace him as their champion.

"Of all the candidates, he was the one who resonated most with certain segments of the Republican electorate," says Terry Madonna, a political scientist at Franklin & Marshall College in Lancaster, Pa.

"They were his rock," Madonna says. "They kept him in the race while others came and went."

But Santorum found himself trapped in a "demographic box," as Madonna puts it. He won support among evangelicals, rural voters and those with low levels of income and education. His victories came mainly in Southern states or more rural parts of the Midwest and Rocky Mountain states.

But he was unable to win in larger, more diverse states. Throughout the Midwest, Santorum looked like he might threaten Romney, but instead he lost in state after state: Michigan, Ohio, Illinois and, last week, Wisconsin.

Those losses undermined one of the main rationales of Santorum's campaign. Throughout the early days of the race, Santorum bragged about his ability to appeal to swing voters in big, industrial states, having represented Pennsylvania in Congress for 16 years.

But Santorum had lost his 2006 re-election bid by 17 points. That was one big reason he spent 2011 watching nearly every other candidate climb ahead of him in the polls. 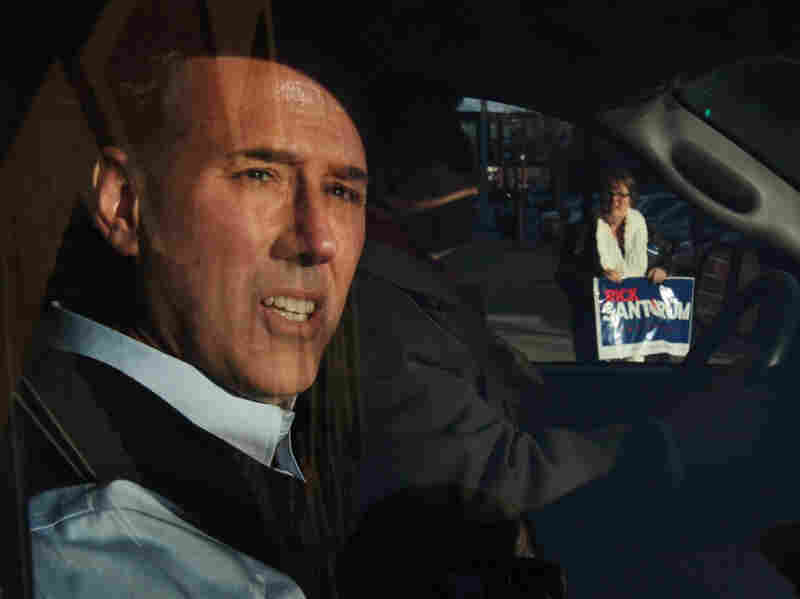 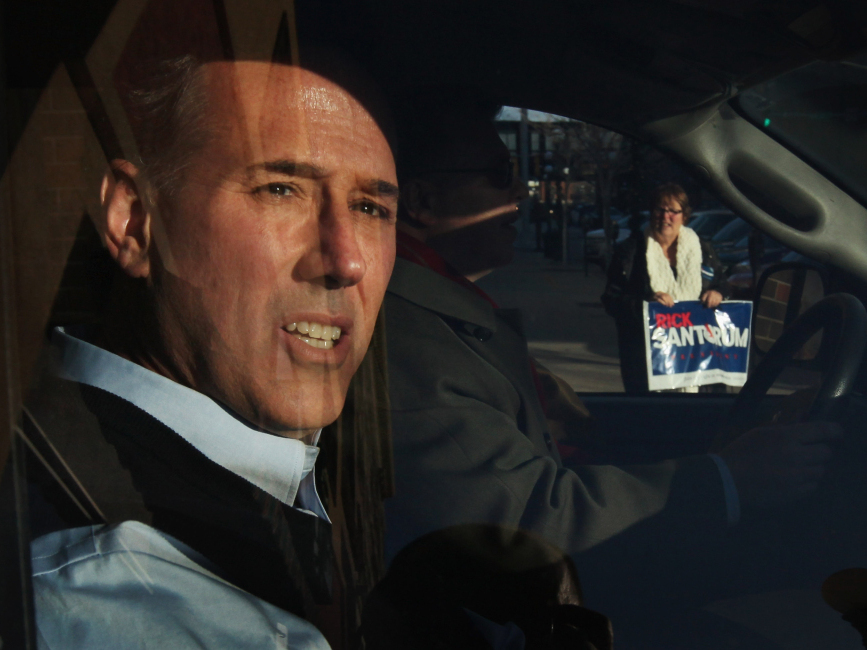 "If it weren't for his 17-point loss in his last Senate campaign in Pennsylvania, he would have emerged sooner as the leading voice of the social conservatives," says Smith, the Penn political scientist.

There were various reasons Santorum kept losing to Romney in the clutch. Romney enjoyed huge advantages in terms of fundraising and organizational strength. Through much of the race, Santorum was living on fumes, lacking even a physical address for his national headquarters.

But Santorum's direct appeals to social conservatives, while helping to shore up their support, also limited his ability to win over other voters, says Smith.

Santorum seemed to line up against broader public opinion on certain issues, including his remarks that a speech by John F. Kennedy extolling the separation of church and state "makes me throw up."

On the eve of the Michigan primary, Santorum also called Obama a "snob" because he wants "everybody in America to go to college."

These were not new sentiments for Santorum, who was known for courting controversy in the Senate. There, he was a leader in the fights to ban late abortion and create a constitutional ban on same-sex marriage and emerged as a favorite target for liberals.

"He didn't approach his campaigns at the crucial moments as someone who could bridge the various divisions of the Republican Party," says Olsen, the AEI scholar. "He presented himself as the champion of one of them."

Santorum may have a bright future as a conservative commentator and speechmaker or activist. If he chooses to seek the presidency again — and he's only 53 — the question he'll face is whether he can broaden his appeal beyond the social conservative base that revived his political career.

"The same things that put him forward for the runner-up status for the Republican nomination have effectively reduced his credibility in a general election," says English, the former representative, who is backing Romney.