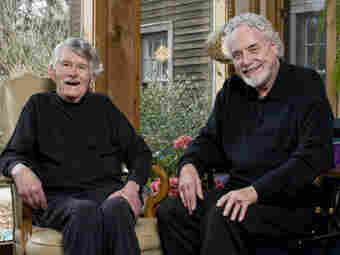 Herbert Burtis' spouse, John Ferris (left), died four years ago. When Burtis went to the Social Security office to apply for survivor benefits, the clerk told him the federal government did not recognize his marriage. Courtesy of Herbert Burtis hide caption

Herbert Burtis met the person he wanted to marry in college, in 1948. But since the object of his affection was another man, they had to wait until 2004 for the ceremony, when Massachusetts legalized same-sex marriages.

"It's a long engagement," Burtis says, laughing. "We thought it was time that we made each other honest people."

His spouse, John Ferris, died four years ago. When Burtis went to the Social Security office to apply for survivor benefits, the clerk told him the federal government did not recognize his marriage.

Hearings On The Defense Of Marriage Act

Burtis is one of 17 gay men and women who are asking a federal court in Boston to clear up the confusion. On Wednesday, the First Circuit Court of Appeals will begin hearings on whether the Defense of Marriage Act, or DOMA, is unconstitutional.

The 1996 law prohibits the federal government from recognizing same-sex marriages. In their lawsuit, Burtis, two other surviving partners and seven couples argue that the law denies them benefits that are given to heterosexual married couples.

"These couples have waited for decades to marry," says Mary Bonauto, an attorney with Gay and Lesbian Advocates and Defenders, or GLAD.

"They have paid their taxes, they have paid into the system," she says. "But they alone are excluded from every conceivable federal marital protection and obligation."

"All married people are treated one way by the federal government, except same-sex couples," she says.

In general, each state sets the criteria for marriage, Wardle says — how old you must be, or whether you can marry your first cousin. But he says that when giving out federal benefits, Congress can decide what marriages it will recognize. And that's what it did in 1996.

"Congress says historically it's been a man and a woman, and that is the institution that we want to protect," he adds.

More than three-dozen states have laws recognizing marriage as between a man and a woman, Wardle says, adding that the proper way to change DOMA is not through the courts.

"If the plaintiffs in the case that are now up in the Court of Appeals would simply spend their efforts going to Congress, Congress could change that," Wardle says. "What they're attempting to do, I think, is political manipulation of our judiciary."

But society has changed radically since 1996, says law professor Andrew Koppelman of Northwestern University. He says DOMA is past its cultural expiration date.

"The idea that these families don't count as families, and aren't entitled to any of the legal entitlements of families, just seems weird now," Koppelman says.

And the law has changed, too. In recent years, six states and the District of Columbia have recognized same-sex marriage. Two federal courts have struck down DOMA. And last year, the Justice Department — which has the role of defending federal laws — announced it would no longer defend DOMA because, it said, the law illegally discriminates against gay couples.