Accessibility links
The Secret To Germany's Low Youth Unemployment Employment prospects for many of Europe's youth are bleak due to the debt crisis and austerity measures. That's not the case in Germany, which has Europe's lowest youth unemployment rate. Part of the reason is an on-the-job apprenticeship system that serves Germany's high-tech economy. 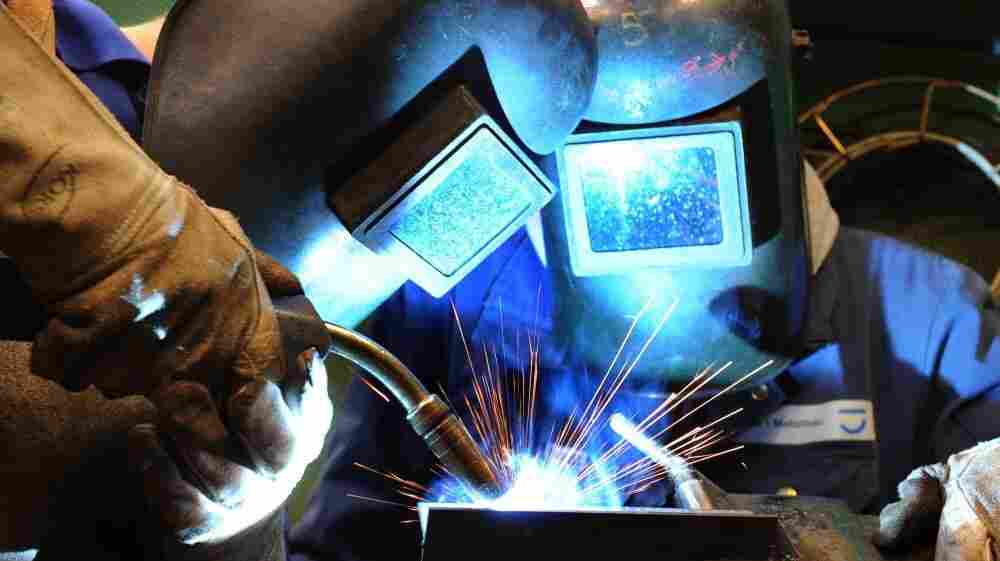 Metal-working apprentices train in Leipzig, Germany, in 2010. Germany has Europe's lowest youth unemployment rate, thanks in part to its ancient apprentice system, which trains about 1.5 million people each year. Waltraud Grubitzsch/DPA/Landov hide caption 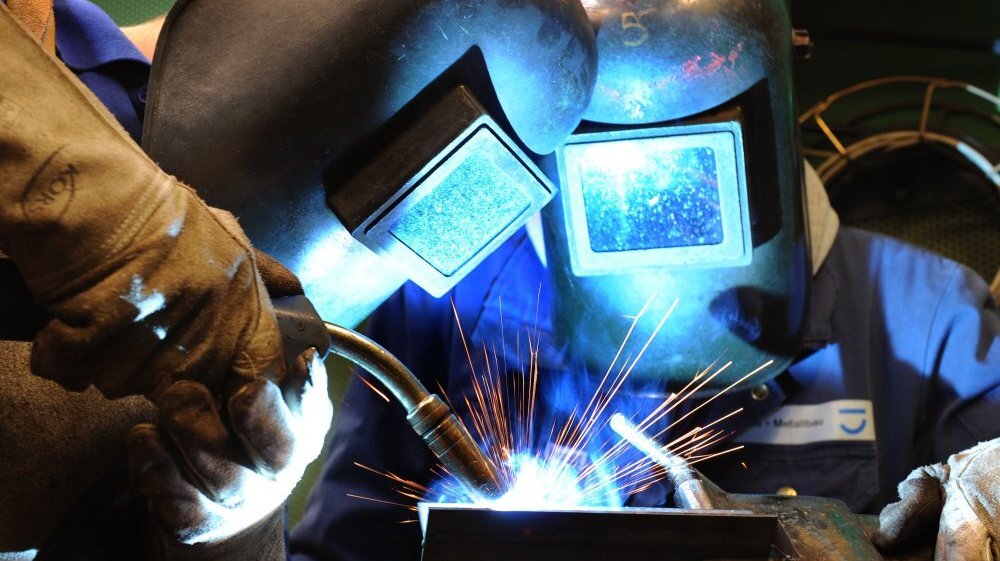 Metal-working apprentices train in Leipzig, Germany, in 2010. Germany has Europe's lowest youth unemployment rate, thanks in part to its ancient apprentice system, which trains about 1.5 million people each year.

For as long as he can remember, German teenager Robin Dittmar has been obsessed with airplanes. As a little boy, the sound of a plane overhead would send him into the backyard to peer into the sky. Toys had to have wings. Even today, Dittmar sees his car as a kind of ersatz Boeing.

"I've got the number 747 as the number plate of my car. I'm really in love with this airplane," the 18-year-old says.

It's a quite expensive way we go. The benefit we get from the system later, that's a great benefit and makes everything economical.

Less-than-perfect school grades dashed Dittmar's dream of becoming a commercial pilot. But they were good enough to earn him a coveted apprenticeship slot with Lufthansa Technik, the technical arm of Europe's largest airline, responsible for aircraft maintenance and repair across the globe.

One-third of the way through his three-and-a-half years of training at Lufthansa technical headquarters in Hamburg, Dittmar is honing the skills required to become an aircraft mechanic — and all-but-guaranteeing himself a job.

The protracted European debt crisis and austerity measures have made career prospects for many of the continent's youth bleaker than ever. In Spain and Greece, nearly half of all those under age 25 are unemployed.

But as Dittmar's experience illustrates, that's not the case in Germany. In stark contrast, Germany's youth employment is the highest in Europe, with only a 7.8 percent jobless rate. At the heart of that success is a learn-on-the-job apprenticeship system that has its roots in the Middle Ages but is thriving today in Germany's modern, export-oriented economy.

A brightly lit Lufthansa workshop in Hamburg is part of that apprenticeship system. Teenagers like Dittmar, many dressed in the company's navy blue shirts and overalls, are busy learning the basics: drilling, filing, soldering and manipulating sheet metal.

Dittmar's apprenticeship is part of Germany's well-established and successful "dual system," so-called because training is done both in-house at a company and partly at local vocational colleges.

About two-thirds of his time is spent on the job at Lufthansa — split between workshops and classrooms, and actually working on real aircraft and engines supervised by an experienced full-time mechanic, a "training buddy."

For an aviation buff like Dittmar, getting to work on real machines so soon is not only a sign that his employers see potential in him, but also fuels his passion for planes.

"I could work anyplace in the world. I like the system here," the teenager says. "I know that I will be a good aircraft mechanic when I'm out of the apprenticeship, so that's very cool to know." 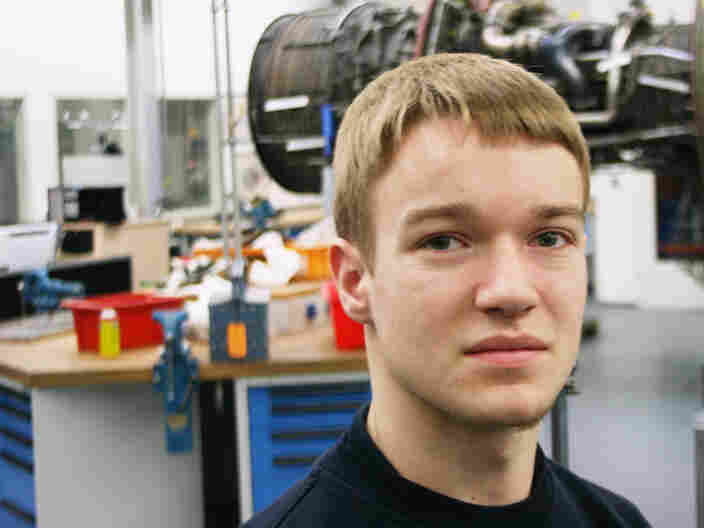 Robin Dittmar, 18, works at the Lufthansa Technik training center in Hamburg. He is about a third of the way through his apprenticeship as an aircraft mechanic and is confident his training will translate into a full-time job. Eric Westervelt/NPR hide caption 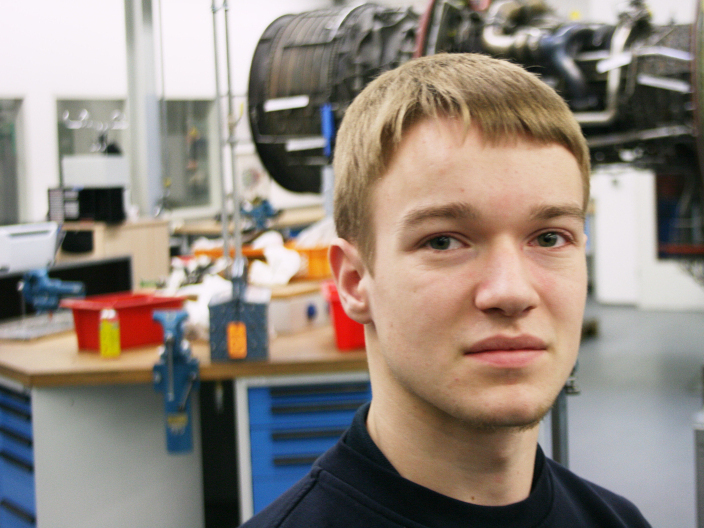 Robin Dittmar, 18, works at the Lufthansa Technik training center in Hamburg. He is about a third of the way through his apprenticeship as an aircraft mechanic and is confident his training will translate into a full-time job.

About 60 percent of German high school graduates travel the same path as Dittmar, choosing vocational over academic education. Throughout his training, Lufthansa pays Dittmar the equivalent of $1,000 a month, one-third of the starting wage a qualified mechanic would get. That's part of the system that some foreign visitors can't comprehend, director Meinhold says.

"I tell them [the apprentices] don't pay anything for it, they get paid by the companies. They get money for their training," Meinhold says. "'You are training them and you are paying them for that?' They can't understand this."

Once qualified, these skilled aeronautical and engine mechanics feed into a fairly robust European aviation industry, either directly at Lufthansa or at one of its subsidiaries or competitors.

For many, the potential of being hired permanently is the key attraction. Germany's industry still offers a majority of skilled workers the elusive "job for life," a long-gone legend in many other Western countries.

Meinhold believes that despite the costs, the apprentice system is an investment vital to the ongoing success of Germany's export-dependent economy by creating loyal, well-trained employees.

"It's a quite expensive way we go," he says. "The benefit we get from the system later, that's a great benefit and makes everything economical."

A Model For The Rest Of Europe?

Germany's dual system trains 1.5 million people annually. Across the board, from bakers and car mechanics to carpenters and violin-makers, about 90 percent of apprentices successfully complete their training, German government figures show. The apprenticeships vary in length, between two and three-and-a-half years. The average training "allowance" is 680 euros a month (approximately $900), and about half of the apprentices stay on in the company that trained them.

"I think what we are going to see with the expansion of the higher level apprenticeships is many people going into them as they leave school, spending time doing that and then going on and doing a university degree linked to their apprenticeship skill," Cameron said. "That is what has happened for years in Germany and it is going to be happening much more in Britain."

But Rolf von Luede, an economic sociologist at the University of Hamburg, isn't so sure the German system would translate well to other parts of Europe. He notes that German industry and its powerful trade unions have a unique relationship marked by what he calls "antagonistic cooperation," a far cry, he says, from the more confrontational policies pursued by unions in Spain and Britain.

"One of the crucial aspects of the German dual system is that it is created by a cooperation of the employers and the trade unions," von Luede says. "[It is] really a model that ensures that the qualifications that are needed within the industry are supported by this apprenticeship." 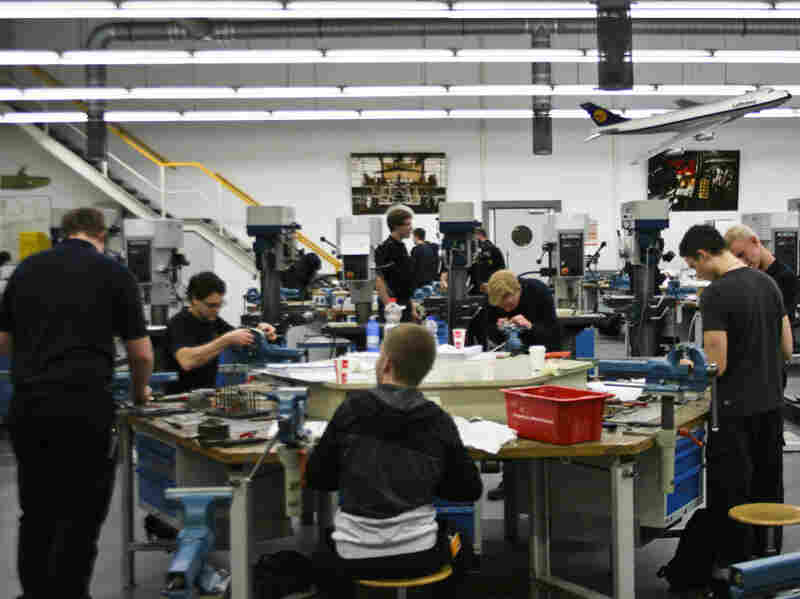 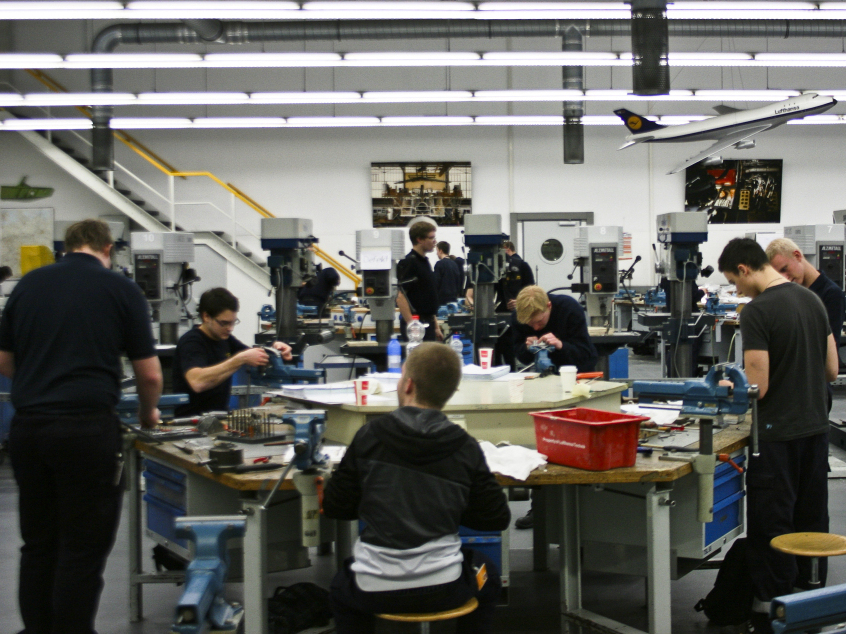 Today Germany has a problem that Britain, Spain and other European countries can only dream of: It doesn't have enough skilled workers to meet the demands of its economy. Almost one-third of German companies could not fill open jobs in 2011. And some 30,000 apprenticeship placements went unfilled — or about 2 percent.

According to von Luede, this deficit is the result of a dramatic demographic shift. Birth rates are falling across Europe, but the effect is pronounced in what was once East Germany: There are half as many high school graduates in the East as there were only five years ago. Von Luede believes the solution is for Germany to relax its immigration policies because Germany's population is shrinking.

"Migration has to be orientated at people who are qualified or who may be qualified in the future by the educational system of Germany," he says.

But while 30,000 apprenticeships went unfilled, 85,000 high school graduates failed to find a placement. The reason for this mismatch, a recent study by the German Federal Institute for Vocational Education and Training found, is that the education system is failing to adequately prepare the children of recent immigrants for the job market.

To address the mismatch between jobs and the labor market, the German government just made it a little easier for skilled foreign workers outside the EU to come to Germany by lowering the income requirement — to about $60,000 from $88,000.

Under the rules change, non-EU workers who meet the new requirement will be able to stay in Germany permanently after a three-year period, if they are still employed. People with particularly good German language skills will be allowed to stay after a two-year period.