Accessibility links
America's Magnet For Innovation, And Investments It's become a Silicon Valley ritual: a passionate entrepreneur asks a venture capitalist for money, promising technological innovation — and maybe a big financial return. But the area's tradition started just five decades ago, when the only certainty about high-tech was that it would be big someday.

Timeline: The Birth Of Silicon Valley 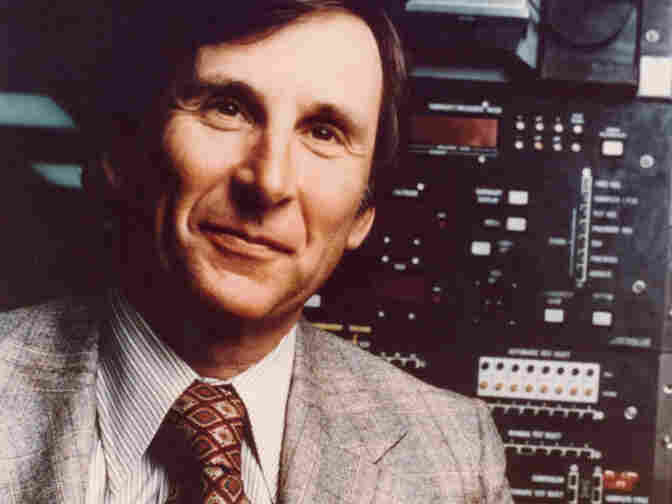 Think of the most technologically innovative companies of the past 50 years, such as Intel, Apple, Google, Facebook and Twitter. Each company has a Silicon Valley address — and each one got backing from venture capitalists. Over the past decade, more than 35 percent of the nation's venture capital has gone to Silicon Valley startups.

Today, when tech entrepreneurs go looking for money, they could easily end up on University Avenue in downtown Palo Alto, Calif., with its clean brick sidewalks and high-end boutiques.

Among the venture capitalists with an office on University Avenue is Bill Reichert.

On a typical day in his third-floor offices, Reichert is searching for another winner. It's a Silicon Valley ritual: Passionate young entrepreneurs visit him every day, looking for financial backing.

Today, he gets a visit from Virginia Klausmeier. She arrives in a casual suit with her laptop and PowerPoint presentation ready to go. This is her third time in front of Reichert, and she is seeking more than $1 million to support the next phase of her clean diesel fuel project.

Reichert grills Klausmeier about the size of the market for her product, which she plans to sell to refineries. He wants to make sure he should invest in her company.

"We see lots of brilliant innovations" Reichert says, "any one of which could be economically exciting — but we're looking to pick the ones that are the most successful."

If Reichert picks right, he can win big. He could bring back returns 20 times over for himself and his investors. Perhaps he could find the next Facebook, Google or Apple.

Though these sorts of meetings are commonplace in Silicon Valley today, it used to be harder for entrepreneurs like Klausmeier to find financial backing. Because just decades ago, there were no venture capitalists in Silicon Valley.

Take a company like Hewlett-Packard. In 1938, Bill Hewlett and David Packard used the bootstrap method to start their company. They began tinkering in a garage, backed by $500 and a used drill press. It took a long time to build their business.

The other method back then was to know the right people. Martin Kenney, a venture capital historian who is a professor at the University of California, Davis, says that when they were starting out, industrialists like Henry Ford and Andrew Carnegie asked friends and business contacts for money.

According to Stanford archivist and Silicon Valley historian Leslie Berlin, the big change in funding for tech startups — or "connecting high-tech brains with money" — took root in 1959 in the area now known as Silicon Valley.

Berlin says that back then, business people were becoming more interested in electronics. "They didn't know how it worked. They didn't know what it did," Berlin says. But, "They thought it was going to be big."

At that time, the area had the beginnings of a tech sector. William Shockley, who co-invented the transistor, had his lab here. Stanford University opened its Industrial Park, where companies like Lockheed, General Electric and Hewlett-Packard established facilities.

The nascent tech sector drew the attention of three men who would open the area's first venture capital firm with the intent of investing in technology.

Though there had been some early venture capital activity on the East Coast, the structure these men set up was new. And Berlin says that it is widely seen as the precursor to today's venture capital firms.

Here's how their plan worked: The venture capitalists — VCs — would go out and find new companies. Then they would match investors with these new companies. The VCs got a cut of any profits, and — key to the arrangement — the investors could not be held liable for any legal problems at the startup.

Draper, Gaither & Anderson got $6 million worth of investment, Berlin says, and had to find a place to put it. The attempt to invest money sounds comical today.

"People who worked at Draper, Gaither, Anderson would describe driving around to little companies and saying basically, 'Do you need any money?' " Berlin says. "And they had a hard time finding anybody to take it, because it sounded so shady."

Berlin says some people at the startup firms reacted by thinking, "Wait a second — these people want to just give me money? Why?"

In the end, Draper, Gaither & Anderson didn't do that well. And it was a different Silicon Valley firm that showed how venture capital investments could pay off. One of its founders was Arthur Rock.

At his spacious San Francisco office overlooking the Bay Bridge, Rock, now a trim and elegant 85-year-old, chuckles as he thinks back on his career. "There's no way that I know of, other than finding a gold mine, of making as much money as you can [make] in technology" he says.

Rock co-founded Davis and Rock in 1961. The firm hit it really big with an investment in Scientific Data Systems, or SDS — one of the first companies to use microchips in computers. Davis and Rock invested close to $260,000. Eight years later, Xerox purchased SDS for almost $1 billion.

In 1968, Rock brought together the funding for another new company. Its name was Intel.

"It's probably the only company I ever invested in that I was 100 percent sure would work out," he says.

After the success of Davis and Rock, venture capital firms popped up all over the area. And in the years that followed, it was dubbed Silicon Valley.

Perhaps those companies, or business like them, were destined to happen — but if their founders had had to struggle more, or get loans from a bank, it would have taken much longer.

Professor Kenney says that venture capitalists are more willing than banks to take a risk because the payback can be so big. He says that he believes venture capital sped up the pace of innovation "and brought new technologies forward that may have come about, but certainly would have taken much longer."

"It also gave an opportunity to brilliant engineers and entrepreneurs to actualize their technological dreams," Kenney says.

An Atmosphere For Innovation

In today's Silicon Valley, tech entrepreneurs like Klausmeier flock to venture capital firms in Palo Alto to help turn their dreams into reality.

It was her late father who created the clean diesel fuel her company uses, Klausmeier says. "He was the chemist behind the whole technology," she says wistfully. "He was my mentor, and he worked on this for years."

Her father did that work at their home in Oregon. But Klausmeier has moved to Silicon Valley because she thinks if you are a young tech entrepreneur, this is the place to be — much the same way Hollywood draws young actors and filmmakers.

"You need to be around people that believe in you on many different levels, and this is the place," she says. "Everyone does believe that you can create change ... and that it's going to be profitable. And they'll invest in you and make it happen."

Klausmeier says that being in Silicon Valley, with its infrastructure of funding and tech success stories, "is just so inspirational."

There have been attempts to re-create Silicon Valley in other cities, such as Boston and New York, and internationally in Berlin and Bangalore. But none of those places draws as much venture capital as Silicon Valley.

The Valley remains the premier destination for tech entrepreneurs with a dream and, as venture capitalists discovered decades ago, backing the right technology is like discovering a gold mine.

Next in the series: Former Intel executives Gordon Moore and Andy Grove