Accessibility links
NYPD's Stop-And-Frisk Tactics Targeted By Critics Some say the New York Police Department's strategy amounts to widespread racial profiling, but supporters counter that it's one reason the city's crime rate is as low as it is. Now, the city's stop-and-frisk numbers reaching record highs, and state lawmakers are pushing to rein the practice in. 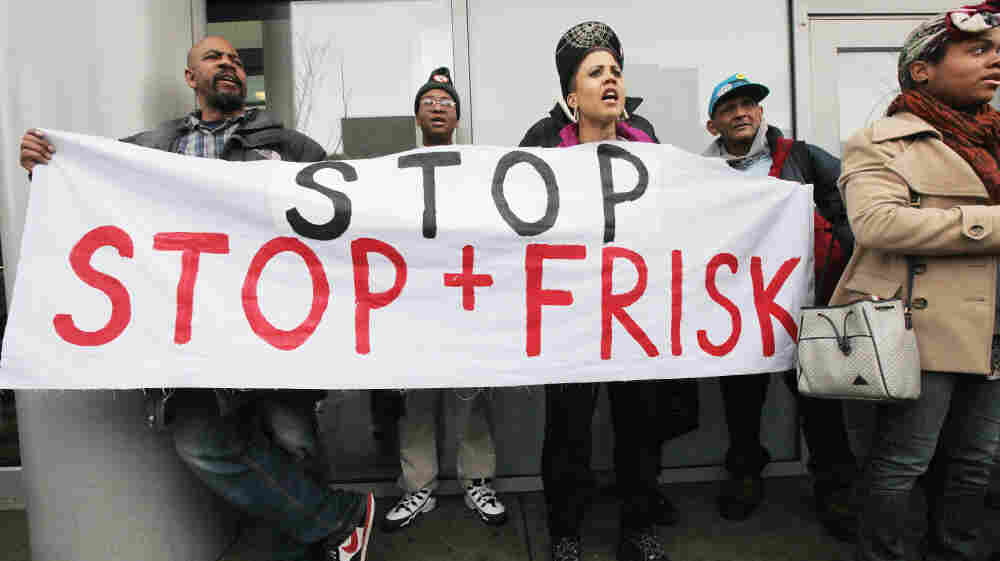 State lawmakers in New York are pushing to rein in the aggressive stop-and-frisk tactics of the New York Police Department. Critics say those tactics amount to widespread racial profiling of young blacks and Latinos, but supporters counter that stop-and-frisk is one reason the crime rate in New York is lower than it's been in decades.

The NYPD says last year it stopped and interrogated about 684,000 people — the most since the department started keeping track a decade ago. And no neighborhood saw more stop-and-frisks than East New York, a predominantly black and Latino section of Brooklyn.

Francis Wilson says he learned his lesson the hard way when he was stopped and arrested a few years ago. "I know to stay out [of their] way," Wilson says, "because, I don't know, times have changed."

In theory, the police need to reasonably suspect that you've committed a crime before they can stop, question and frisk you. But in practice, young black and Latino men say that's not how it works in New York City.

Jason Cabey says he's been stopped by police many times in the past few years. "They just told me to turn around, put my hands on the wall, and they frisked me, just to search me. They didn't tell me what the person did or anything like that, they just said, 'You just fit the description,' " Cabey says. "Nowadays, the cops, they do whatever they want. That's how I feel. I don't think it's right, but that's how it is."

Stop-and-frisk has been part of the NYPD's playbook since at least 1991. But according to the New York Civil Liberties Union, only about 10 percent of stops actually result in a summons or arrest, and the vast majority of subjects — more than 87 percent — are black or Latino. City Councilman Jumaane Williams of Brooklyn says that's racial profiling, and it's a problem.

"It creates a culture that's festering in the NYPD," Williams says. "That culture means you can treat people different depending [on] what they look like." Williams — who is black, with long dreadlocks — had his own run-in with the NYPD last September, when he was arrested during a Labor Day parade in Brooklyn.

Still, police insist the stop-and-frisk program is making the city safer. Police Commissioner Ray Kelly defended the practice in an interview on a local TV news channel in March.

"I think it's an important tool — certainly not the only tool — that we use to keep this city safe," Kelly said. "I think it's one of the tactics and strategies that helped us reduce murders by 51 percent in the Bloomberg decade, I'll call it, from the decade before. The vast majority of those lives saved are young people, young people of color. So what we're talking about is very serious business."

Polls show that New York City voters are split along racial lines when it comes to stop-and-frisk. A recent Quinnipiac University poll found that a majority of whites support the NYPD's tactics, while only 27 percent of blacks do.

Meanwhile, critics hope the recent shooting of Trayvon Martin in Florida will spur more debate about racial profiling here, too. Members of the City Council wore hoodies on the steps of New York City Hall last week in honor of Trayvon, and lawmakers held a similar protest at the state capitol in Albany.

State Sen. Eric Adams of Brooklyn participated in the Albany protest. He says he hopes the Martin case will focus more attention on the racial profiling of young black and Latino men. "Unfortunately, it took the death of Trayvon for people to finally hear their voices, that they are tired of being second-class citizens in a first-class country," Adams says.

Adams is also a retired NYPD sergeant. He and his colleagues in Albany have proposed several bills aimed at limiting how the department can use stop-and-frisks. One such bill would make it illegal to set a quota for the number of stops officers have to make, and several others intended to take racial profiling out of stop-and-frisks all together.

"You don't want to take the tool away completely," Adams says. "It is a useful tool, when it's not abused."

But even these relatively modest reforms seem unlikely to clear the state Legislature, which means stop-and-frisk may remain a fact of life for black and Latino men in New York City.