Accessibility links
Kerry Washington On Bringing Washington 'Scandal' To TV Kerry Washington has a new network drama about a crisis manager in D.C. She says it might remind you of other D.C. shows, but it's got its own interesting inspiration. 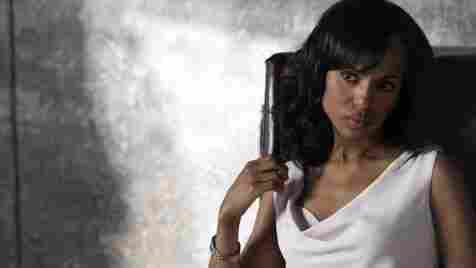 Kerry Washington knows that her new drama, Scandal, will inevitably be compared to another drama about D.C.: The West Wing. Scandal tells Audie Cornish on today's All Things Considered that it even has Josh Malina, a West Wing cast member, for a little of what she calls "secret D.C. credibility."

But instead of taking place at the White House, Scandal follows a crisis manager named Olivia Pope, who steps into ugly, dicey situations and does what needs doing. Pope is based on a real crisis manager named Judy Smith, who worked with public figures, including Monica Lewinsky, at some of their difficult moments.

Washington says she loves research, and she benefited from talking to Smith herself. "Judy gave me her phone number early on, and I think sometimes may have regretted it," she chuckles. She adds that she wasn't the only one: the show's writers would sit around coming up with what they considered an impossible problem, then they'd call Smith and ask her what she would do about it.

While she has some television on her resume, if you've seen Washington before, it may well have been in movies: Save The Last Dance, The Last King Of Scotland, Ray, Tyler Perry's adaptation of For Colored Girls, and others. She says it takes some explaining to get at the difference between the movie grind and the TV grind — even with her own mother, who initially didn't see the big difference between the two, since both involve long hours. "It's three times the number of pages on television," Washington says. She describes the feeling of looking at a script for Scandaland realizing, "Oh my gosh, this speech is two pages long."

Washington isn't leaving movies by any means — in fact, she has a big project coming up in Django Unchained, written and directed by Quentin Tarantino, with a cast that includes Leonardo DiCaprio, Joseph Gordon-Levitt, Sacha Baron Cohen, Samuel L. Jackson, and Christoph Waltz. It reunites her, too, with Jamie Foxx, her co-star in Ray.